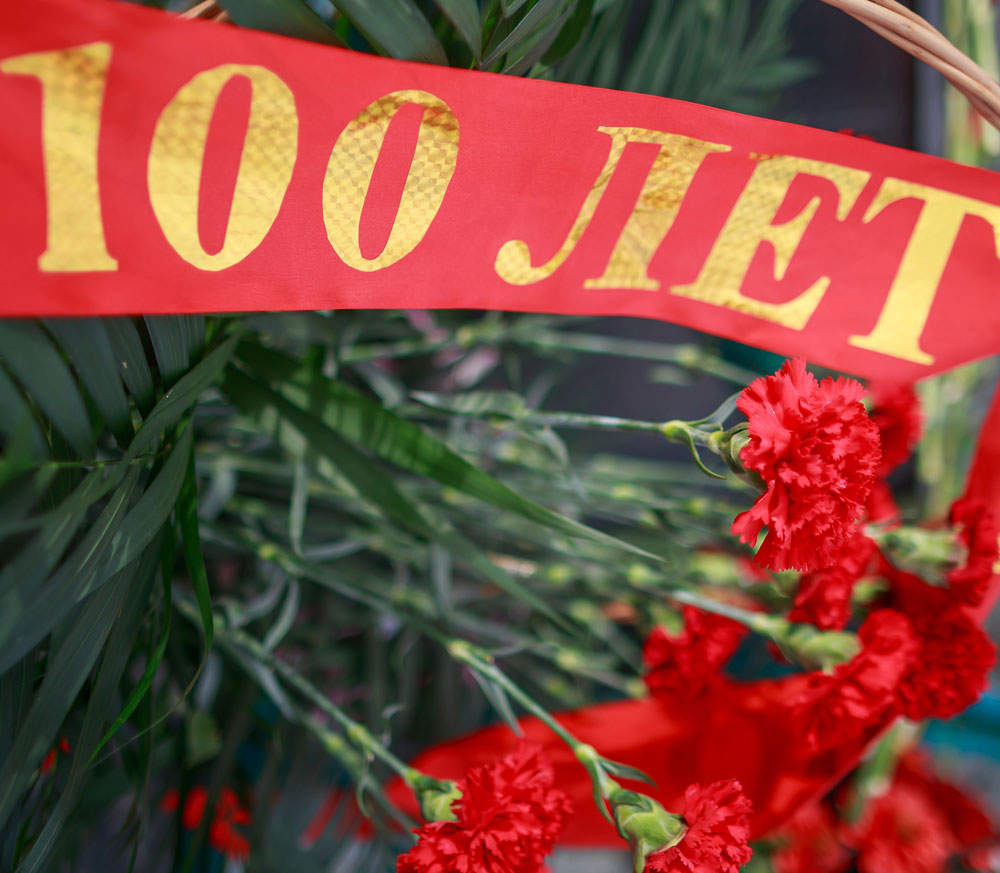 So it was November 7, 2017 - the 100th anniversary of the Great October Revolution - one of the greatest events of the 20th century that influenced the entire course of world history, the destinies of many countries and peoples. It was as a result of the revolution that the Soviet Union emerged - one of the two world superpowers, which had previously had power and influence.

Kazakhstan was forced to adopt a new path of development. During the development of the socialist system, Kazakhstan became a republic, found borders, science, education, health, industry appeared, but at the same time traditional foundations, way of life, and economy were destroyed. The Soviet government carried out large-scale reforms, but at what cost - through famine and repression. 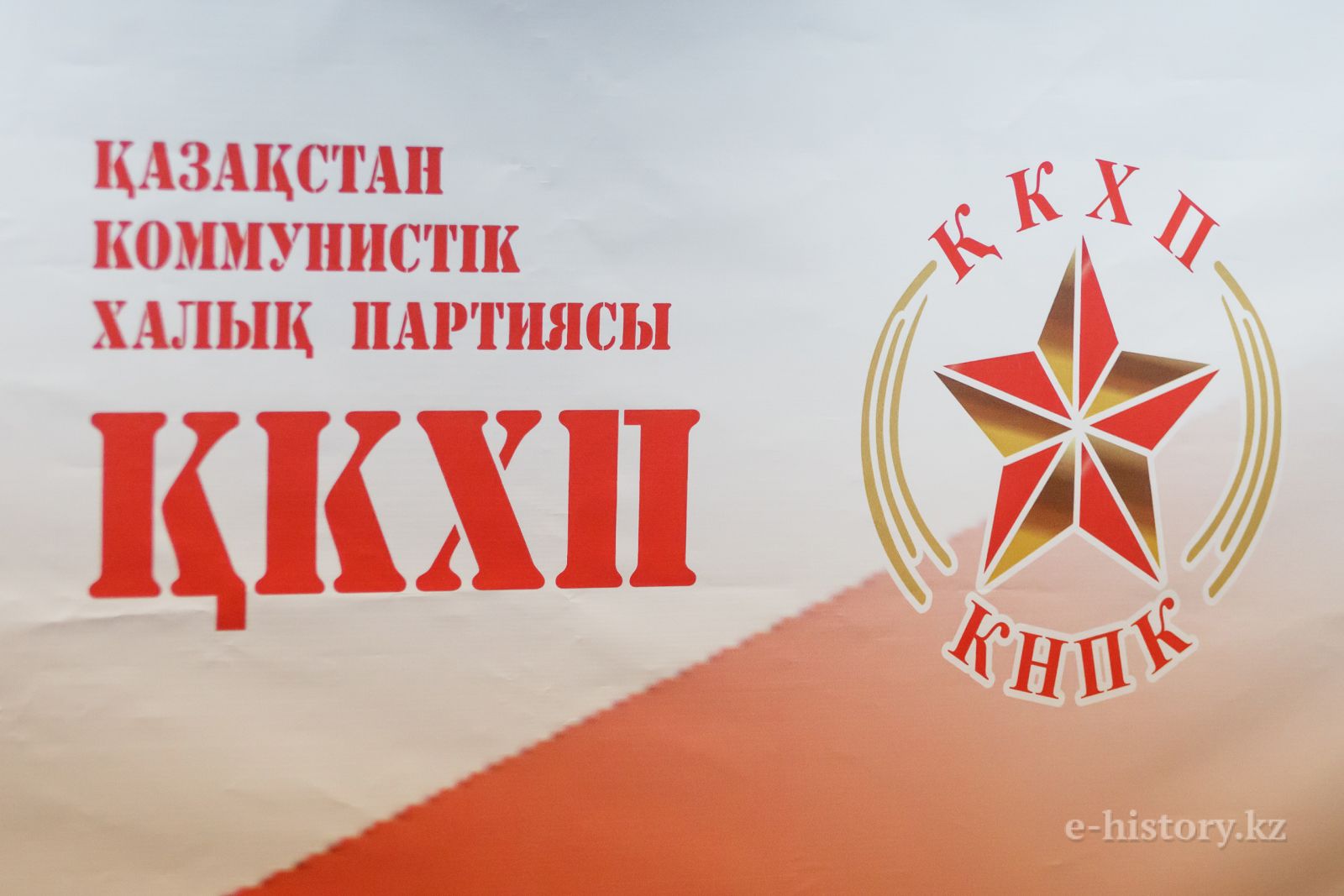 The 100th anniversary of the Great October Socialist Revolution could not pass by Kazakhstan. The Communist People's Party of Kazakhstan, while preserving the traditions of the Bolshevik Party, is one of the leading political forces of the country, whose representatives constitute the parliamentary faction "People's Communists" in the Majilis of the Parliament of the Republic of Kazakhstan. The Astana city committee of the Communist Party organized the laying of flowers and a solemn meeting in the National Archives of the Republic of Kazakhstan. 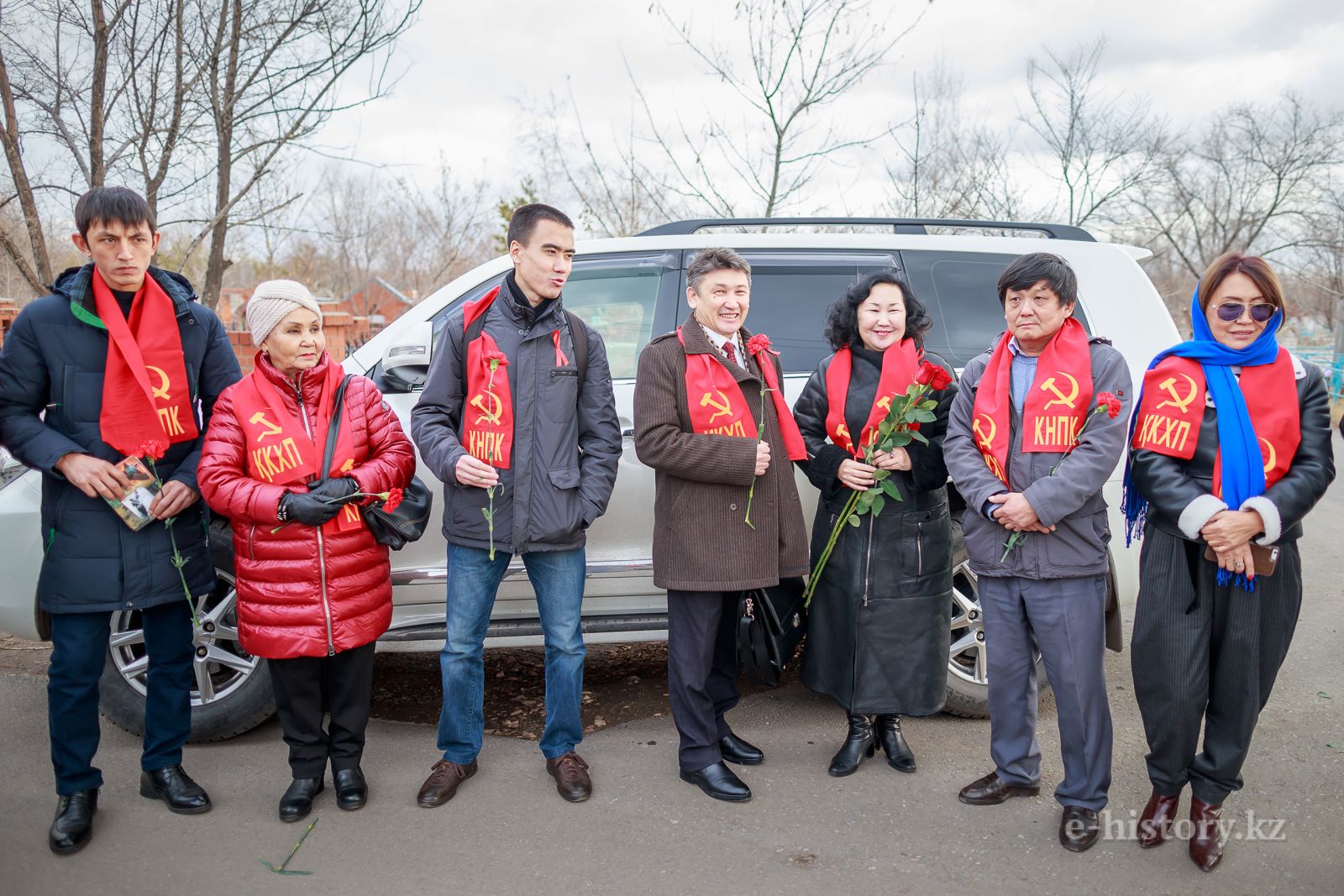 Party activists, veterans of war and labor, Party workers gathered near the Party's office on Kabanbay batyr Avenue. Despite the overcast weather, the red ribbons on the chest made the day brighter. All plunged into a comfortable bus, together with the Secretary of the Central Committee of the Communist People's Party of Kazakhstan Kosarev Vladislav Borisovich.

- Some thought, we will not live to see this day, but we survived! Hooray, comrades! Long live the 100th anniversary of the Great October Revolution!

The bus moved towards the central city cemetery, on the Astrakhan highway. It was there that the granite monument of the memory of the heroes of the Civil War moved. 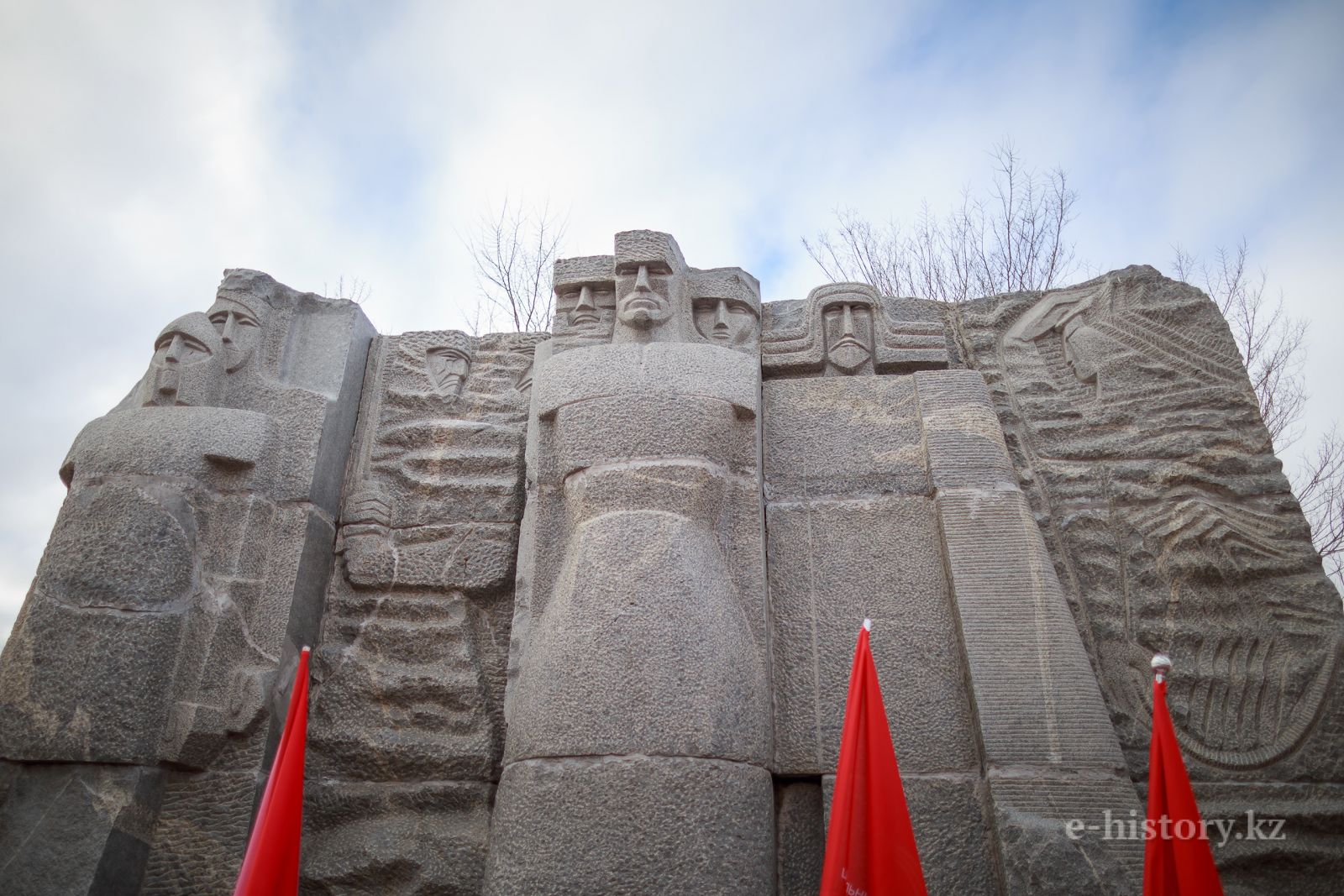 We recall that this monument was opened in the square of the central square of Tselinograd on November 4, 1972, in honor of the 55th anniversary of the Great October Revolution. The monument was erected on the project of the Tselinograd sculptor L.P. Kolotilina. The monument depicts people, frozen in silence over the dust of the heroes. An eternal fire was lit in front of the monument.

It is worth noting that although the members of the Party are mostly elderly people, among them there were young people, representatives of the youth wing of the CPPK. For example, a young man named Sultan recently joined the political Party. He is determined resolutely, defends revolutionary ideas, he is dissatisfied with the activity of the deputies of the Parliament. It is evident that in the future he will become a competent politician.

So, our communist staff (about 30 people) reached the place of laying flowers.

I Secretary of the Astana City Committee of the Communist People's Party of Kazakhstan (CPPK) Aubakirov Marat Abdualiyevich opened the solemn event.

- The October Revolution opened a new era of world civilization. New transformations began, workers and peasants built a new socialist society, and new socialist states appeared on the world map. The supporters of tsarism, the capitalists, the bourgeoisie, who at that time were at the sources of power, probably did not know about this. But history does not stand still and makes its own adjustments. Today we live in a new state - the Republic of Kazakhstan. Paying tribute to this historic date, we came to lay flowers at the monument to the revolutionaries and heroes of the civil war. This monument stood in the center of Tselinograd. I believe that, for reasons that are not understood ideologically, this monument was brought here on the outskirts of the city. We want to honor the memory of those who committed this revolution, who built socialist Kazakhstan. 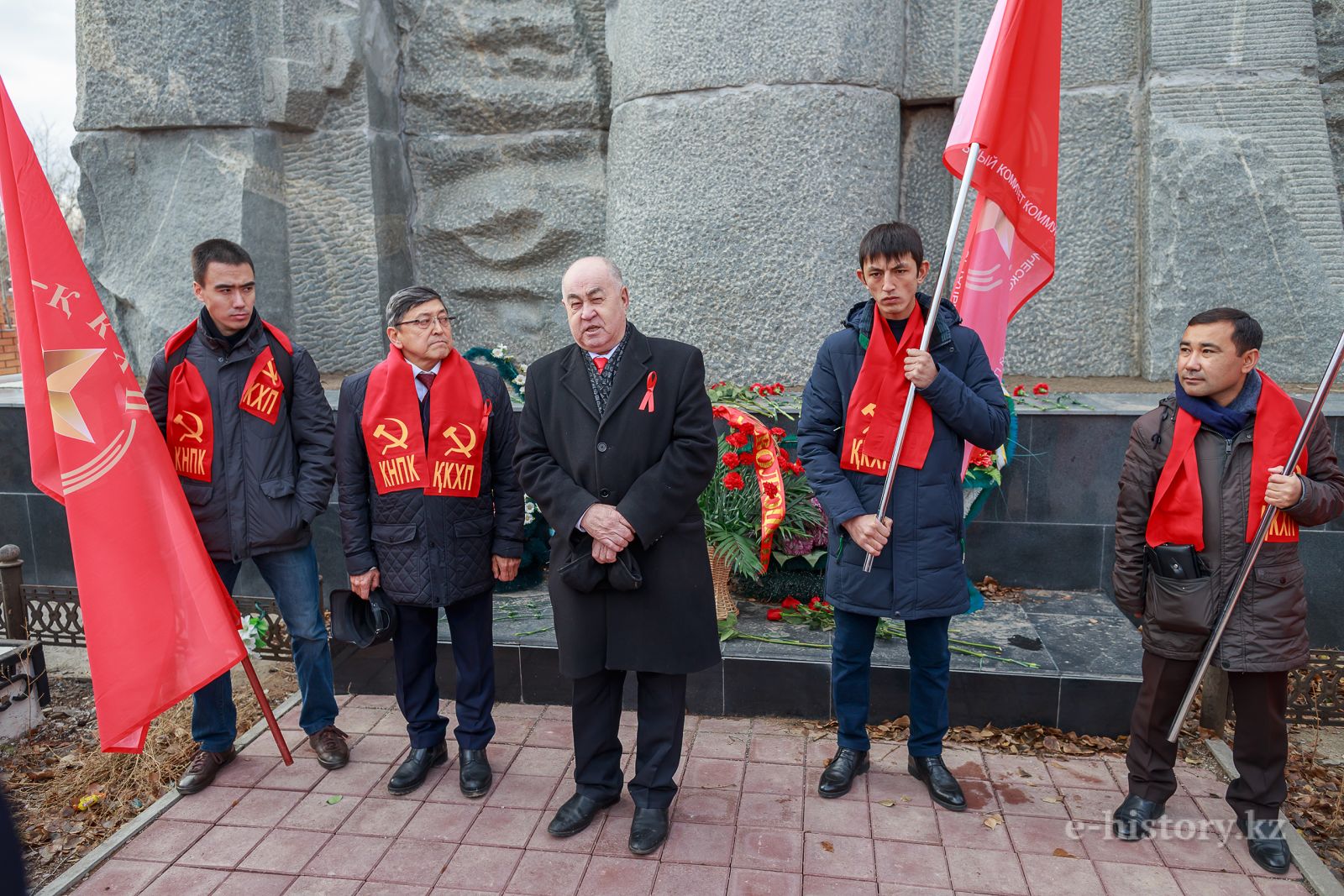 Vladislav Borisovich Kosarev and the devoted Communists laid flowers and honored the memory of the revolutionaries with a minute of silence.

- I am very glad today. The city party organization meets the centenary of the October Revolution in such a good quantitative composition. The organization works, people know and support. I do not meet people either here or in other cities that would be bad about the Soviet system," said Vladislav Borisovich.

Condemning the current situation, the era of market reforms, Kosarev proposed to put opposite Communists and modern ideologists and listen to what they say in defense of modern economic policy and what we say in favor of the Soviet system. V. Kosarev expressed confidence that even by such a small event as today, the CPPK showed that the ideology of Marxism-Leninism is alive and capable of moving society towards progress. 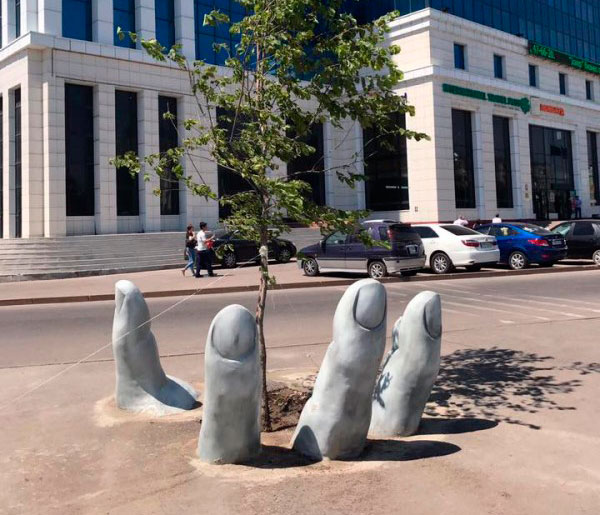 "Newly-baked" party member, Tsoy Vyacheslav, spoke against the tendencies of modern architecture in the guise of the capital.

- They put hideous monuments in the center of the capital, and the monument to the heroes of the Civil War is located on the outskirts of the city… We should raise this question before the city akimat. Such installations should be removed, they destroy our culture! – said Vyacheslav.

Then the Communist Party members went to the National Archives of the Republic of Kazakhstan, where a solemn meeting was held.

M. Aubakirov congratulated participants of the meeting on the centennial anniversary of the revolution. In his report he told about the history of the revolutionary events that took place in October 1917 in Petrograd and in the cities of Kazakhstan in detail.

- We sent invitations to all executive bodies, but no one came, they found a lot of different pretexts and reasons! – M. Aubakirov expressed his dissatisfaction with the attitude of the authorities to this anniversary event.

Participants were shown a small documentary dedicated to the anniversary of revolutionary events. 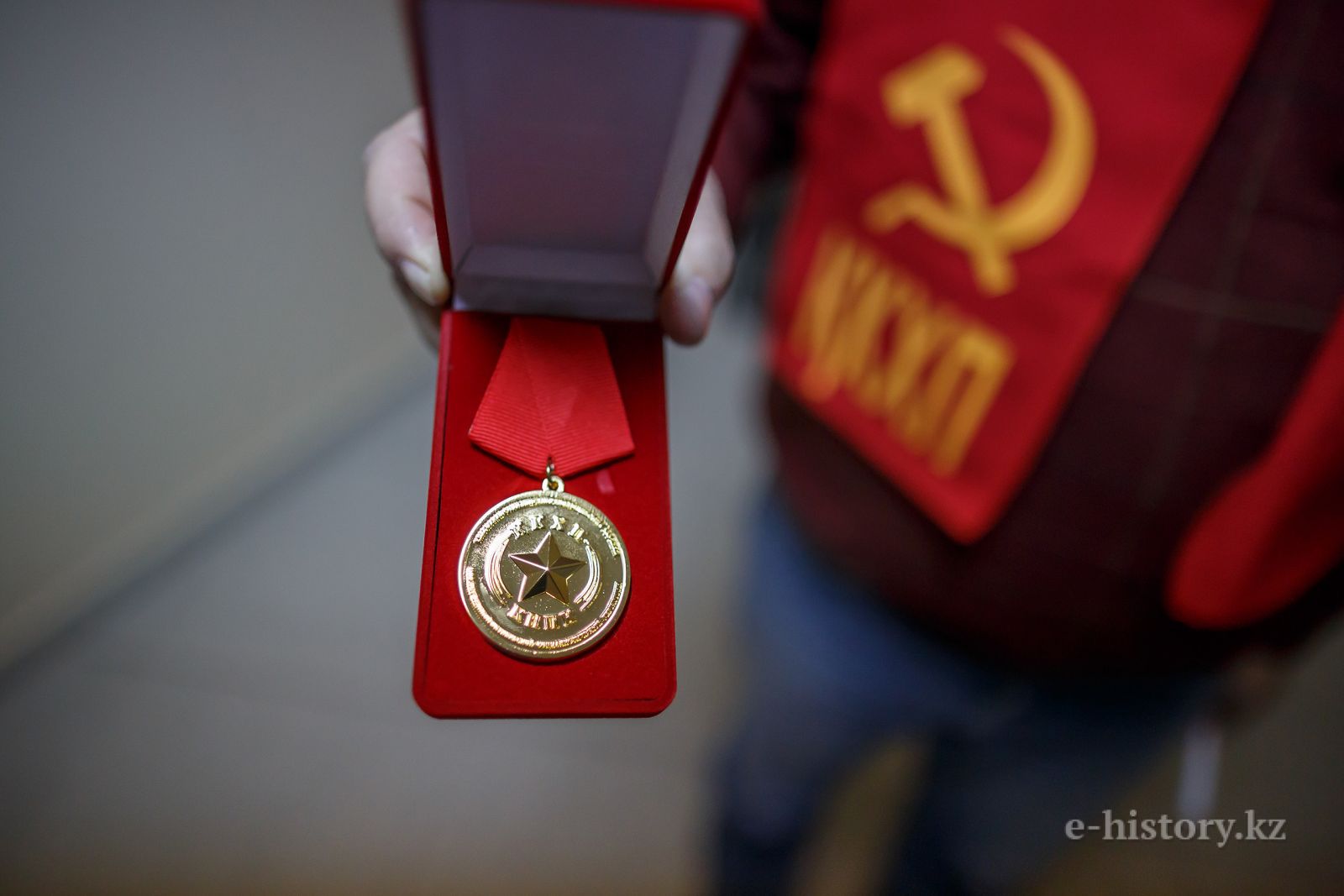 And the most active party workers were awarded jubilee medals and diplomas.

Author: Arman Suleimenov
Use of materials for publication, commercial use, or distribution requires written or oral permission from the Board of Editors or the author. Hyperlink to Qazaqstan tarihy portal is necessary. All rights reserved by the Law RK “On author’s rights and related rights”. To request authorization email to mail@e-history.kz or call to 8 (7172) 57 60 13 (in - 1163)
Қазақша Русский English
MOST READ
Month Year
Recorded history of Kazakhstan. Part 2
Heroic mothers of the great steppe
How had the World War II been started?
Philosophy of the Emblem
14 monuments at Tekturmas
The rural akims: the country's hope is in the elections
Kazakh historical drama Tomiris premiered in Istanbul
Stolypin about the worries and hopes of immigrants to the Kazakh steppes
ALASH IDEA IS THE PROTECTION OF KAZAKH STATEHOOD
A tireless explorer of the Kazakh land
SWITCHING TO THE LATIN ALPHABET – UNITE ALL KAZAKH PEOPLE
Kunaev Dinmukhamed Akhmedovich
People who eat horses will kill you
Materials on theme
100 years to uprising of 1916
Unique documents are presented at the National Archive RK
Park of Friendship
Kazakhstan Peace Initiative