Windmills of the ingenious Hidalgo 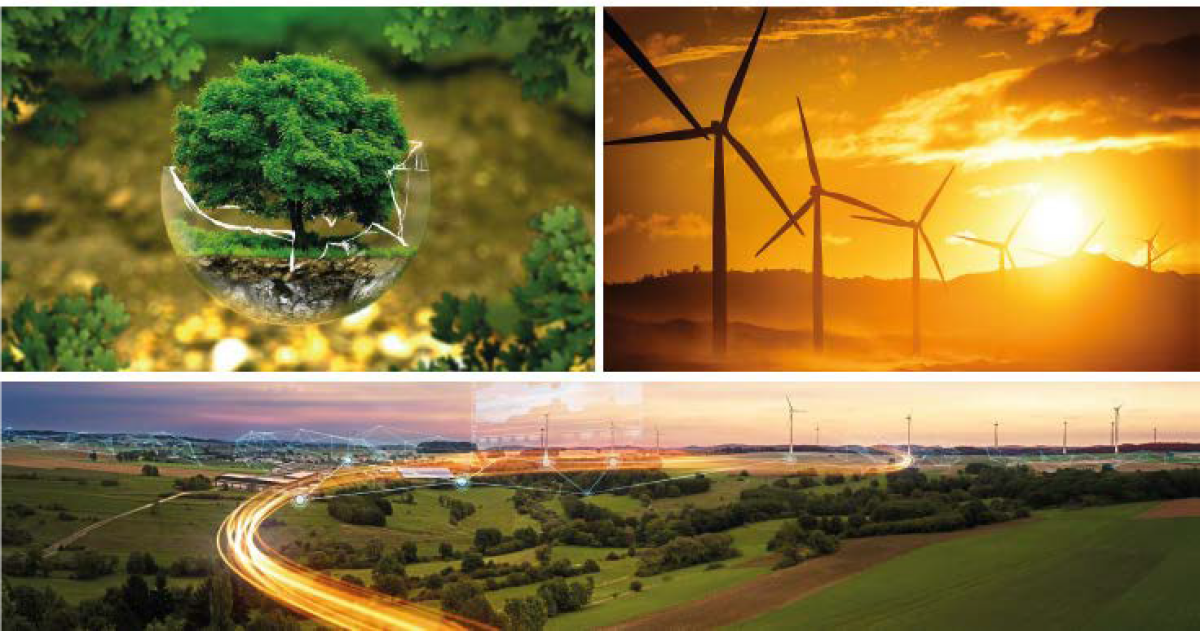 Could Miguel Cervantes have guessed that windmills, the fictional enemies of Don Quixote of La Mancha, would make Spain the world leader in the production of wind turbines?

Spain is not an accidental guest at EXPO-2017. At the site in Astana, the Spanish delegation seeks to emphasize the importance of moving to a global renewable energy system that will help reduce CO2 emissions, reduce oil dependence and increase the energy autonomy of various regions and communities around the world. In this direction, Spain has done a lot of work, a national energy system has been introduced, and in which renewable energy sources are increasingly occupied. In addition, Spain is the leader in the use of renewable energy sources around the world, thanks to the contribution of our companies in the design and implementation of renewable energy production and management systems. 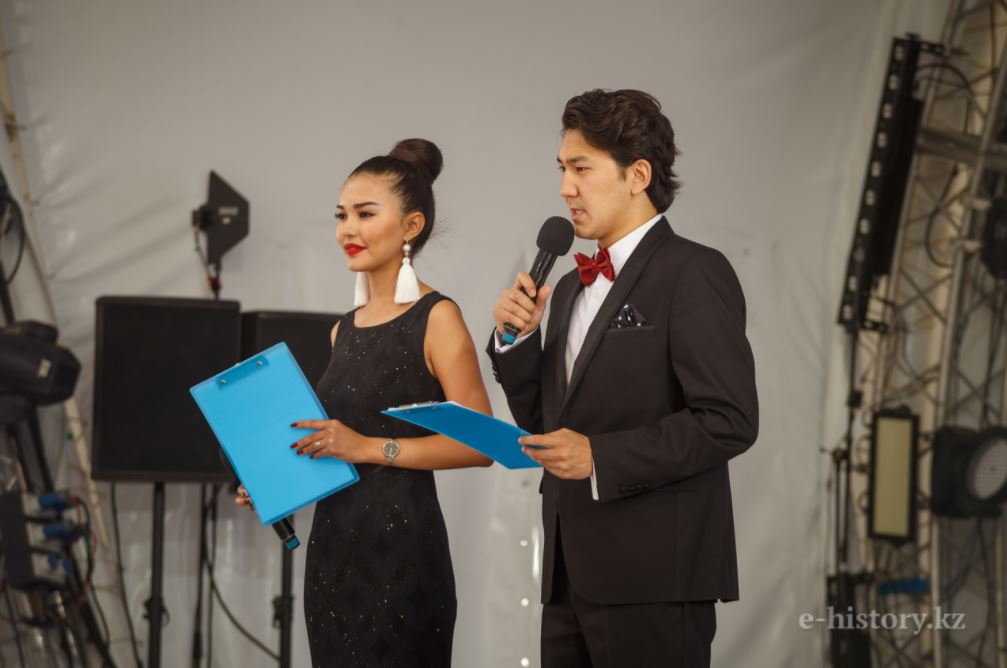 Finally, beautiful presenter rose to the stage, setting the beginning of the official part. After the execution of national anthems, the flag of the Kingdom of Spain was raised. 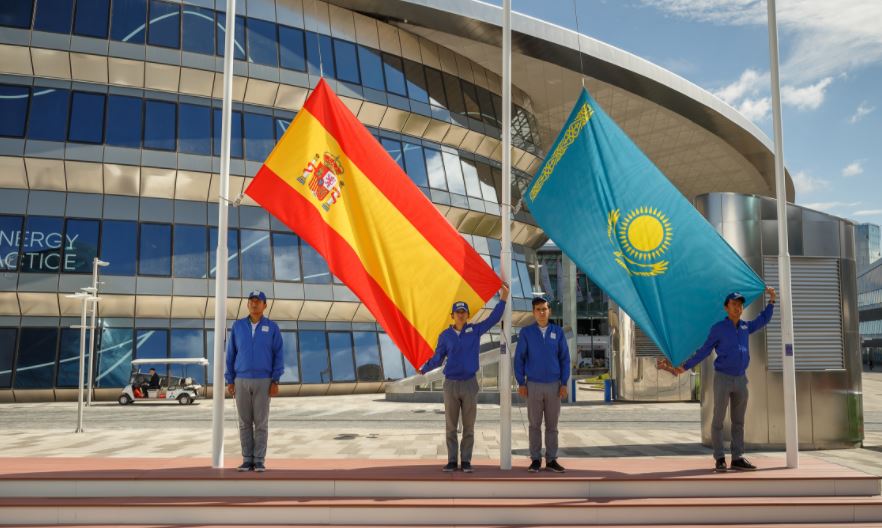 Deputy Chairman of the Mazhilis of the Parliament of the Republic of Kazakhstan Issimbayeva Gulmira Istaybekovna opened an official ceremony and congratulated all those present on the opening of the National Day of Spain. 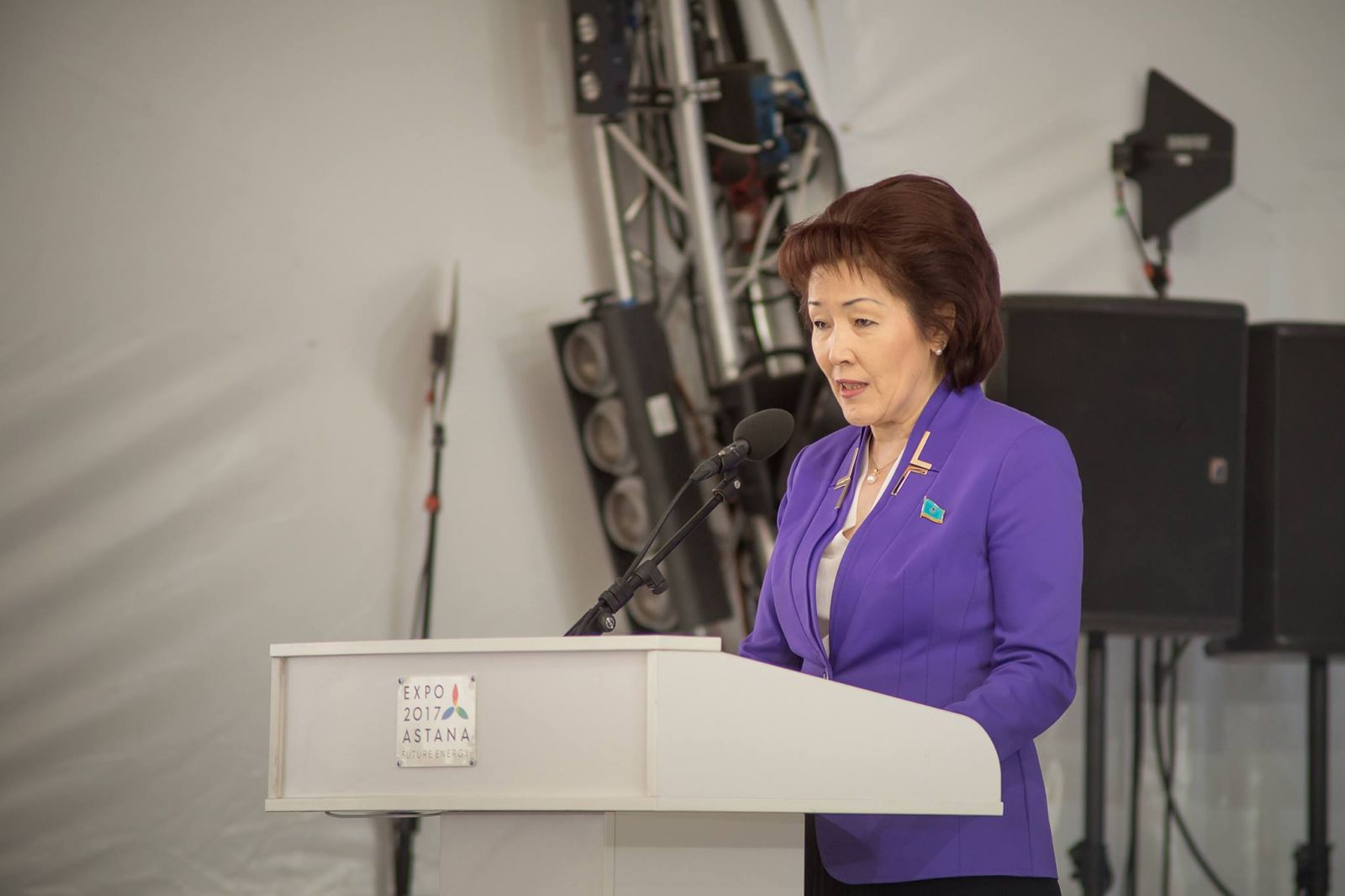 Gulmira Issimbayeva noted that the pavilion of Spain is one of the best in the field of alternative energy. We know that Spain has already held an international exhibition of EXPO several times, and very efficiently. In Spain, there were 4 international exhibitions: in 1888 in Barcelona, ​​in 1929 in Barcelona, ​​in 1982 in Seville, in 2008 in Zaragoza. Nursultan Nazarbayev visited the exhibition in Zaragoza. The exhibition made an indelible impression on the President. So the idea of ​​holding an exhibition in Astana was born. The theme "Future Energy" is actively developing in Kazakhstan, at the moment we have 50 enterprises that produce energy using modern technologies. By 2050, it is planned to increase the production of alternative energy to 50%. For this we are holding this exhibition. It is important to emphasize that in developing alternative energy, especially in the wind sector, Spain holds the leading positions in the world. 73% of the solar energy produced in the world is produced by Spanish companies. Therefore, Kazakhstan has much to learn from Spain, and this only brings us closer. 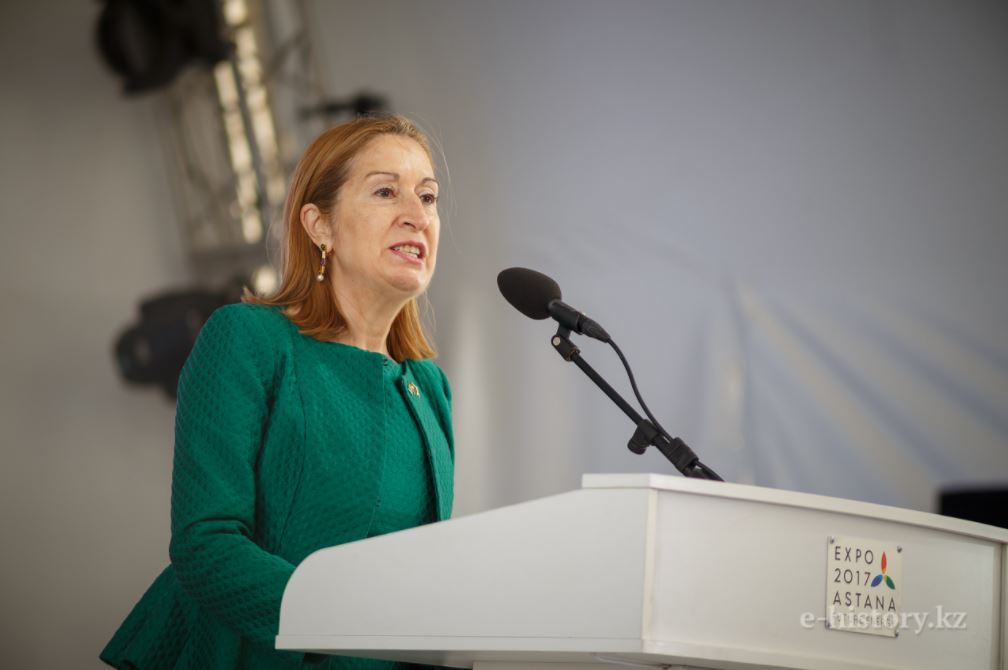 Spain in its pavilion presents achievements over the past 10 years in the field of introducing and developing alternative energy from environmentally friendly sources like wind and sun. With a salutatory word to the participants of the event addressed the Chairman of the Congress of Deputies of the Kingdom of Spain, Ana Pastor.

"We are very pleased to participate in the international specialized exhibition "Astana Expo-2017". Our country occupies a leading position in the study of green energy. For example, the PSA solar power plant in Almeria is the center of world-class excellence in the field of solar thermal energy research, and CENER is the first laboratory in the world to test the strength and quality of wind turbines. We are proud to present our latest achievements and experience in the use of renewable energy sources," Ana Pastor noted. 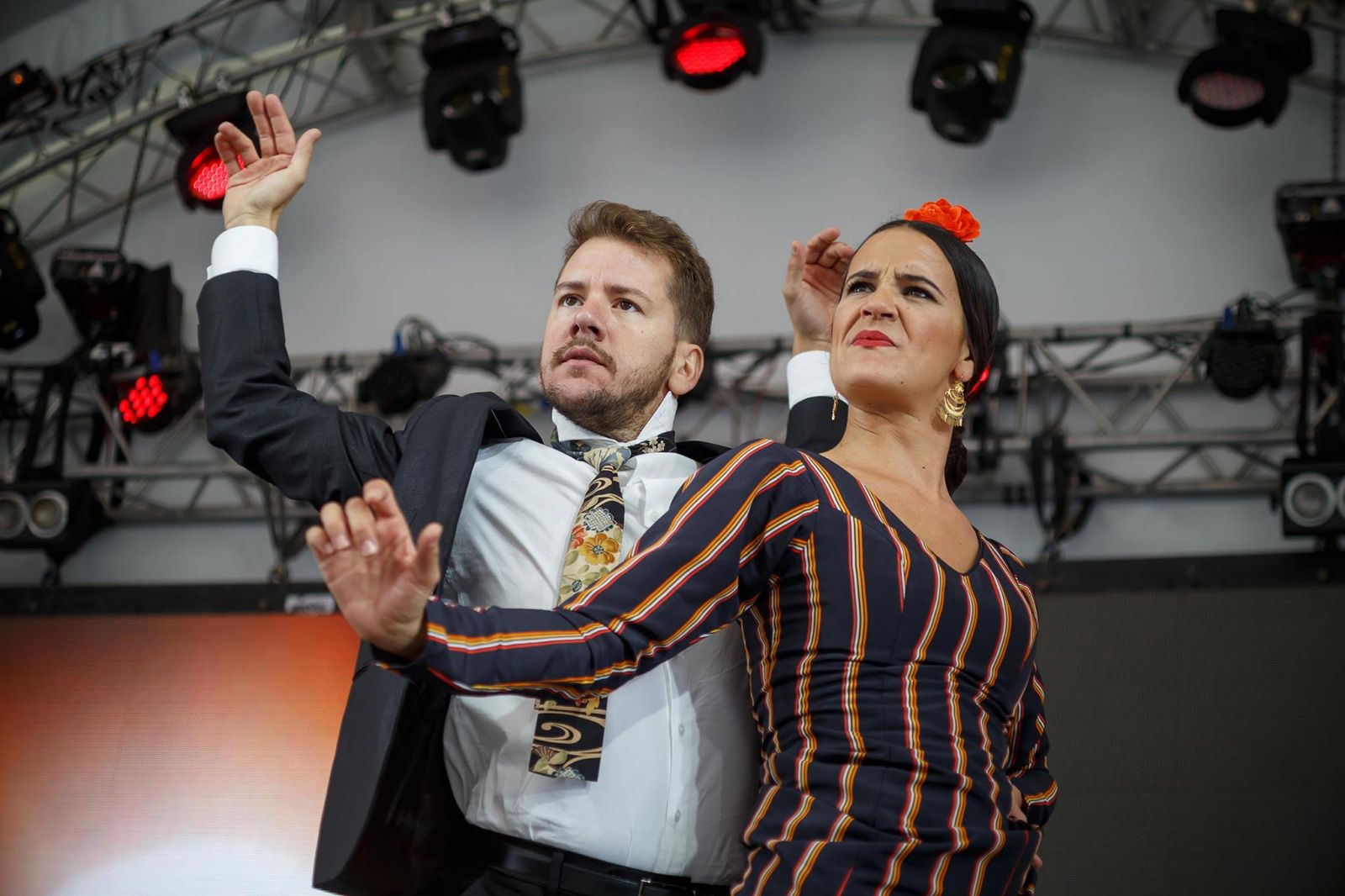 The official part of the ceremony on the National Day Stage ended with a small but striking and impressive musical Spanish performance "Compañía Flamenca". 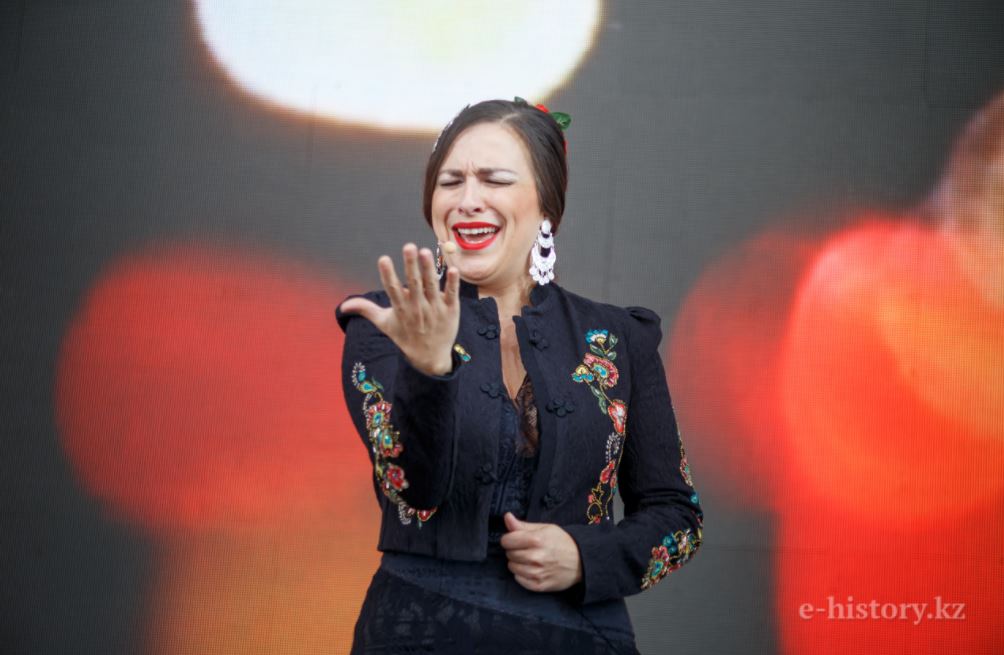 The Kingdom Pavilion is executed in a creative and metaphorical design. In the center of the pavilion there are three houses. 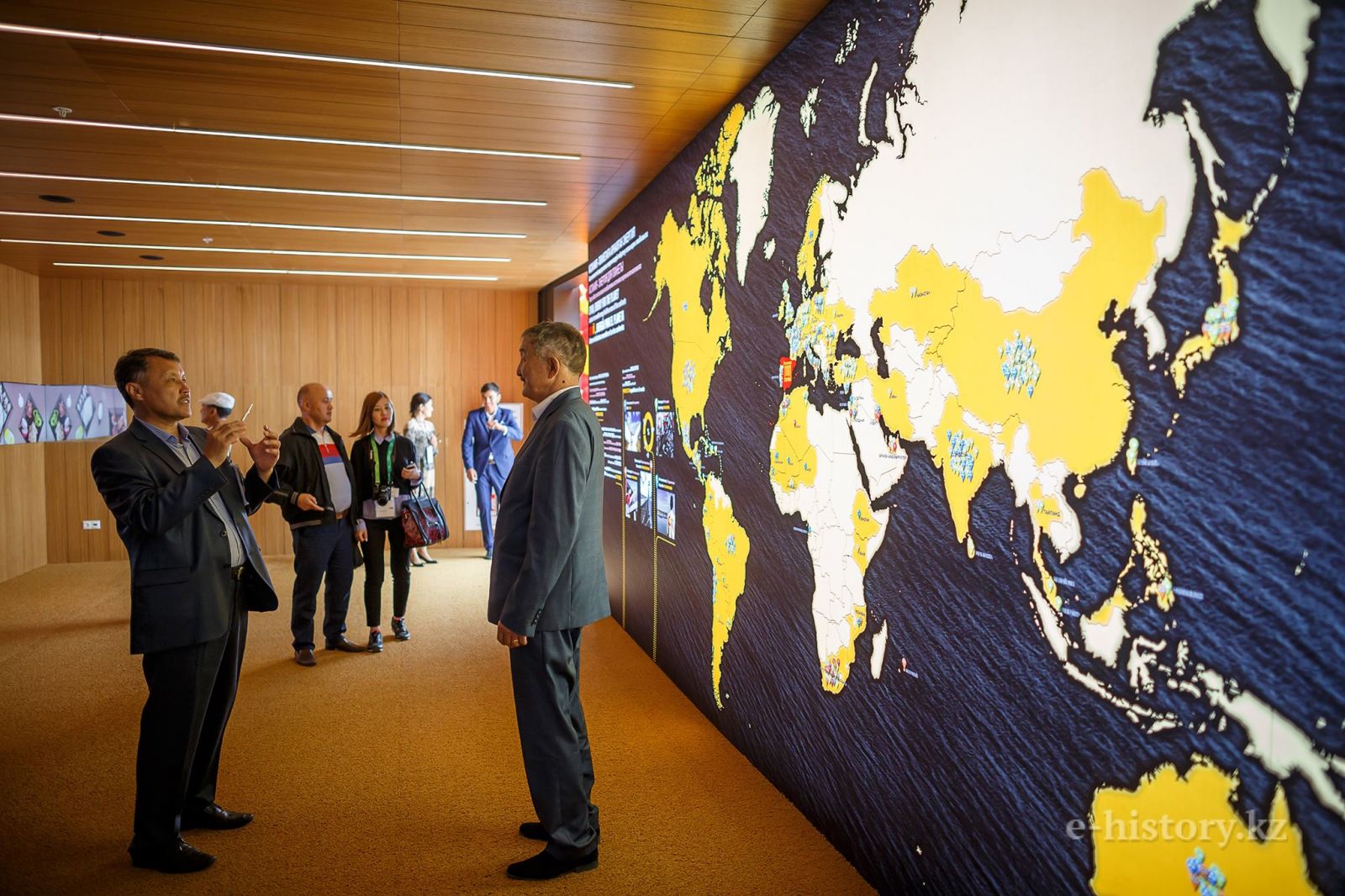 The first house "The time of using renewable energy" indicates the need for a transition to a new energy model based on de-carbonization and green energy. A small animated film shows that the evolution of traditional energy models led to the only idea of ​​transition to the energy model of decarburization and sustainable development. As part of the signing of the Paris Agreement, many countries have committed themselves to setting goals and timetables for reducing CO2 emissions in the coming years, as the only way to preserve the ecology of our planet. 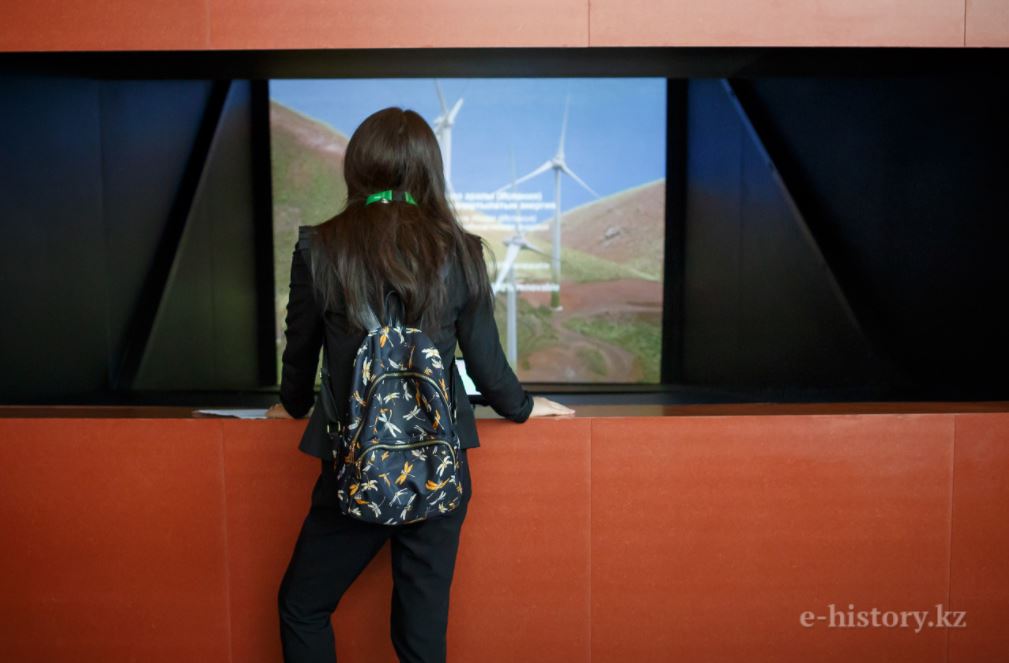 The second house "Dreamers, Pioneers, Innovators" is dedicated to specific projects and innovative solutions in the field of renewable energy, developed and implemented in Spain over the past decades. On a large screen with holographic effects, examples of the use of innovation and renewable energy in Spain are demonstrated. For example, the energy model for the island of Hierro, inhabited by more than 10 000 people, located in the biosphere reserve of the Canary Islands. This island is on the way to achieving energy self-sufficiency through the use of a special combination of hydroelectric power and wind energy. Also, a thematic example is the functioning of the renewable energy integration system in the Spanish Electrical Network, a world-class energy management model. 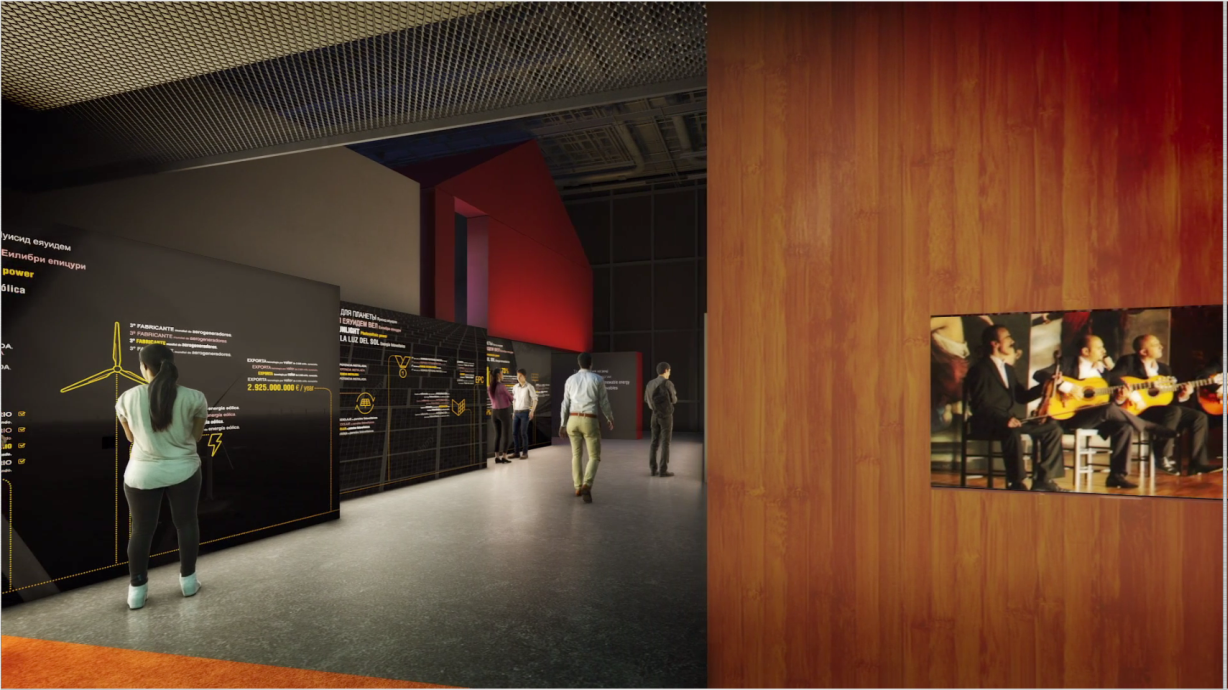 The third house "Spain, energy for the whole world" introduces visitors to a variety of solutions and equipment designed to produce environmentally friendly renewable energy already used in Spain. This forms an idea of ​​the creative and technological capabilities of Spanish companies and the rich experience in this field of industry. 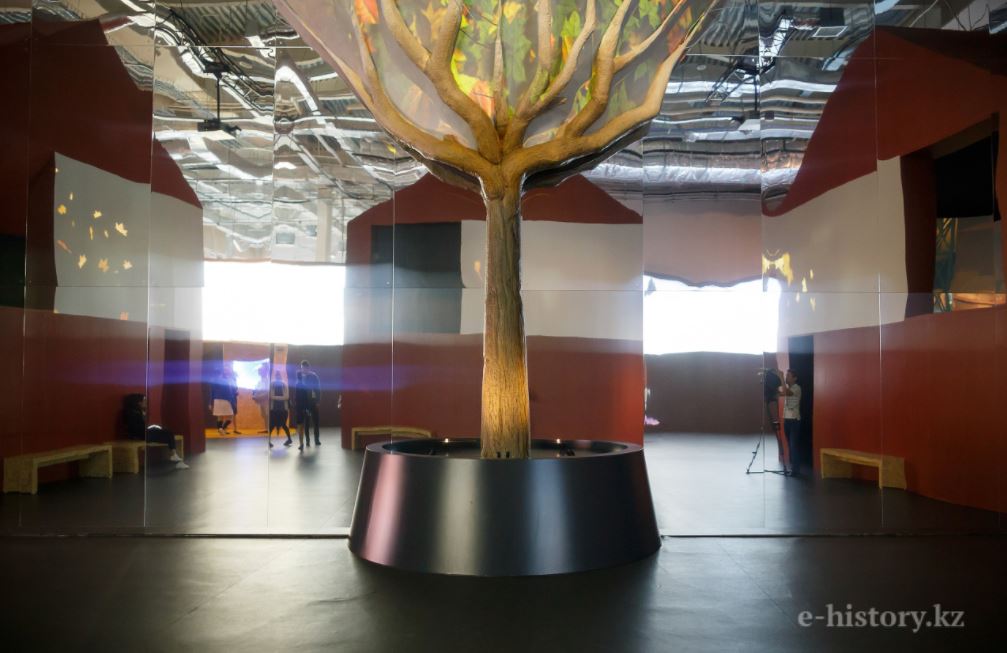 The "living" tree located in the very center of the pavilion comes to life by using the effects of digital projections and reproduces the natural seasonal cycle in nature, recalling the importance of maintaining a balance between one's own needs, consumption and nature, which is the final idea of ​​the pavilion. 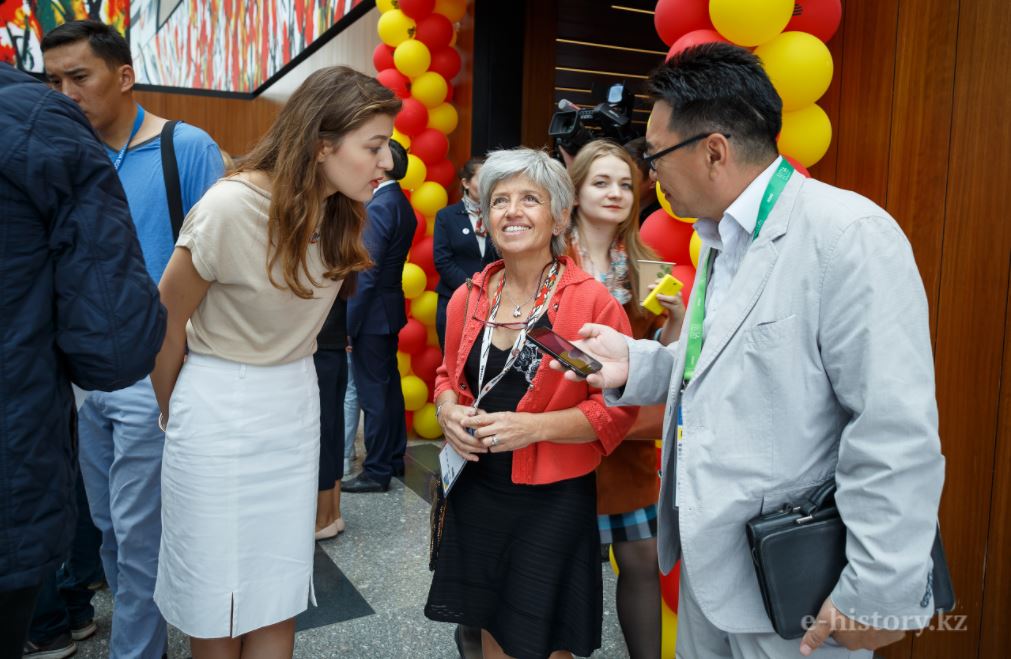 Director of the Pavilion of Spain, Mrs. Carmen Bueno Sanchez:

- At the moment, Spain is a leader in the production of renewable energy. Spain produces renewable energy from such sources as wind power, thermoelectric energy, and hydraulic energy. Also, Spain uses combined energy sources, such as wind energy and solar energy to produce energy 24 hours a day. 40% of the energy consumed in Spain is renewable energy. This is so for two reasons. The first reason is that Spain has a large amount of sun and wind, almost like in Kazakhstan. The second reason is a large number of technologies developed and used by Spain. In Spain, a large number of wind parks and parks to obtain the energy of the sun have been installed. For these two reasons, 40% of the energy is renewable energy. 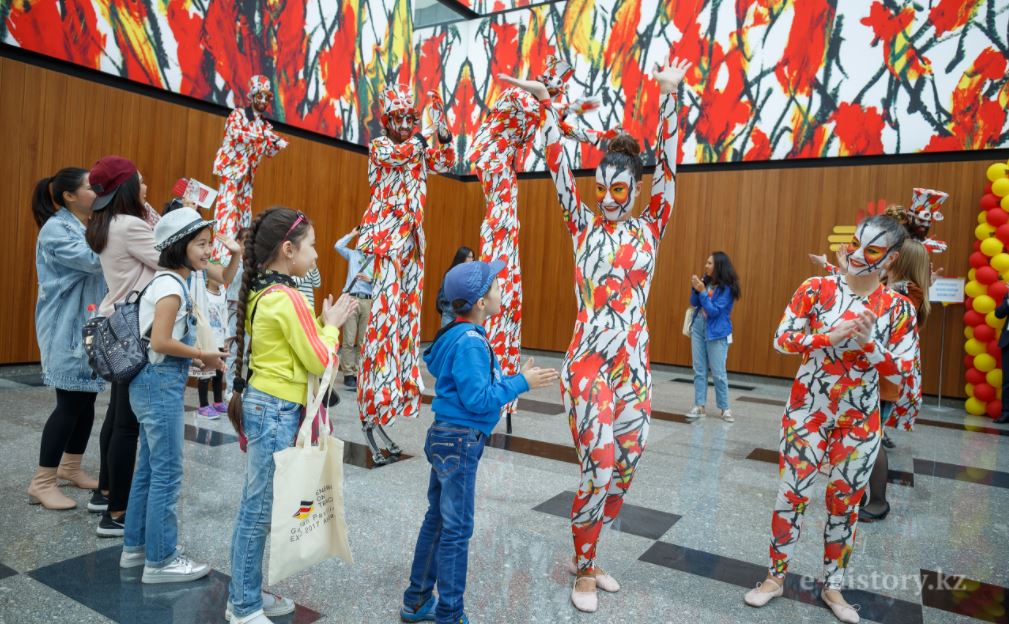 After the official part, the audience gathered in the atrium of the pavilion of Spain, where they were greeted by actors of the street theater "Carros de Foc". The artists prepared a special show program for the visitors. Under live music on the site, an incendiary dance flared up, the performers of which suddenly became the spectators themselves, first small participants, and then adults. Waves of joy, laughter and fun filled the improvised dance floor. 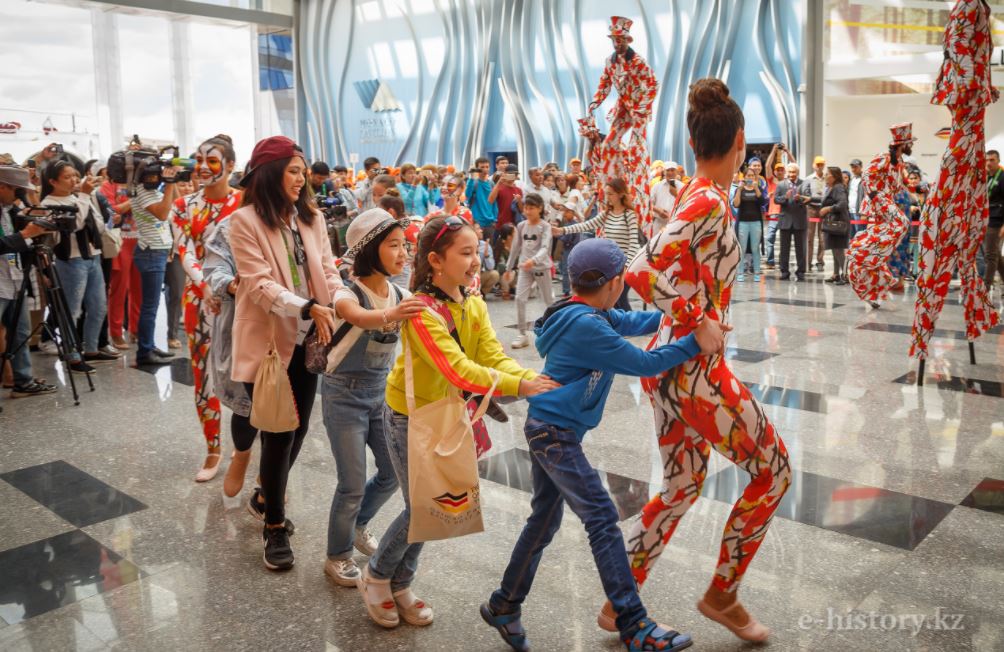 The Spanish artists picked up children, young people, and beautiful girls and involved them in the general dance. The highest artist, who climbed the stilts, tore off the baseball caps from the audience and put them on the heads of others. Children and adults were delighted with such a wonderful idea.

After the opening ceremony, in the pavilion of Spain for several days will be held various events aimed at promoting the culture of Spain in the world.