The event was organized to discuss and analyze the political, socio-economic aspects of the formation of the capital of Kazakhstan - Astana, the city's achievements in the international arena, and the exclusive role and initiatives of the First President of the Republic of Kazakhstan - Elbasy N.A. Nazarbayev in its development.

Representatives of the Parliament of the Republic of Kazakhstan, national cultural centers of Astana, scientists, researchers and experts took part in the round table.

In his opening speech, First Deputy Director of the Elbasy Library, Doctor of Political Sciences, Professor Amerkhan Rakhimzhanov noted: "Today no one is trying to challenge the thesis that the transfer of the capital turned out to be a successful project of Kazakhstan and personally the Head of State. The ideas of the transfer of capitals, initiated by the leaders of states, require considerable political will and courage, since the need for such decisions is confirmed only after a long time. Today the capital of our country is one of the unique Kazakh brands. This city is quite justifiably connected with the name of the First President of the Republic of Kazakhstan. It was here that the inflexible will of N.A. Nazarbayev was manifested, as well as his courage, energy and vision." 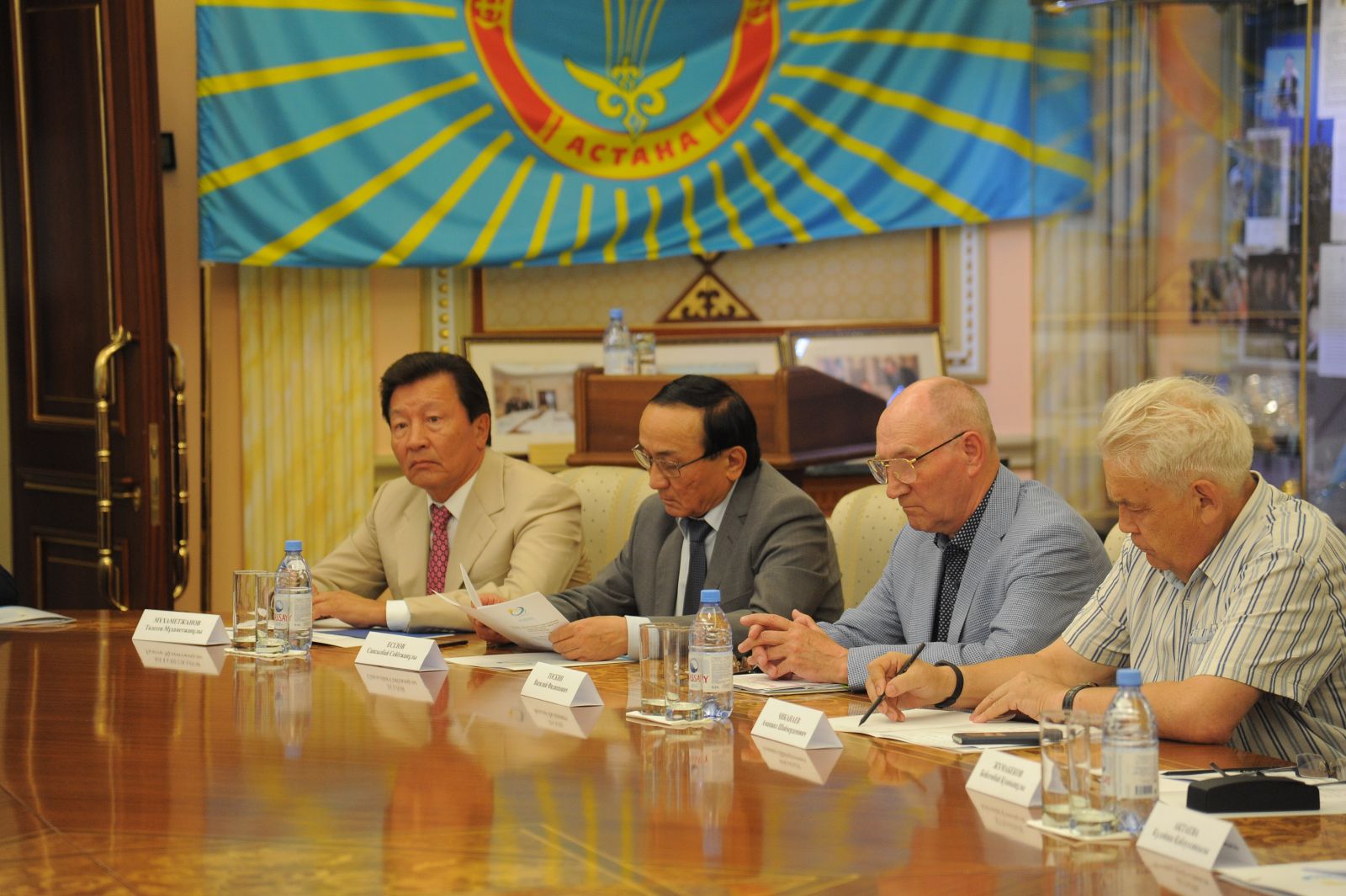 Amerkhan Rakhimzhanov drew the attention of those present that the meeting was taking place in the Golden Hall, where in 1998 the winner of the international open competition for the sketch-idea of ​​Astana development - the Japanese architect Kisho Kurokawa presented his projects to the Head of State. In the same room, the general layout of the city development was adopted. The integrity of the subject-spatial environment preserves the exposition "Astana is a symbol of unity and independence of Kazakhstan".

President of the International Association "World through Culture", composer, poet, laureate of the State Prize of the Republic of Kazakhstan, former deputy akim of Astana Tolegen Mukhametzhanov recalls: "At the dawn of our independence I was in Paris, visited the Louvre and thought then how it would be good if our boys and girls saw this, how their view of the world would have changed. Years later, for the first time strolling along our Water-green boulevard, I suddenly realized that the Louvre is - with us. We now have places in the city where we can educate our children. They will be different, better than we, because they see this beauty and the world completely different eyes." 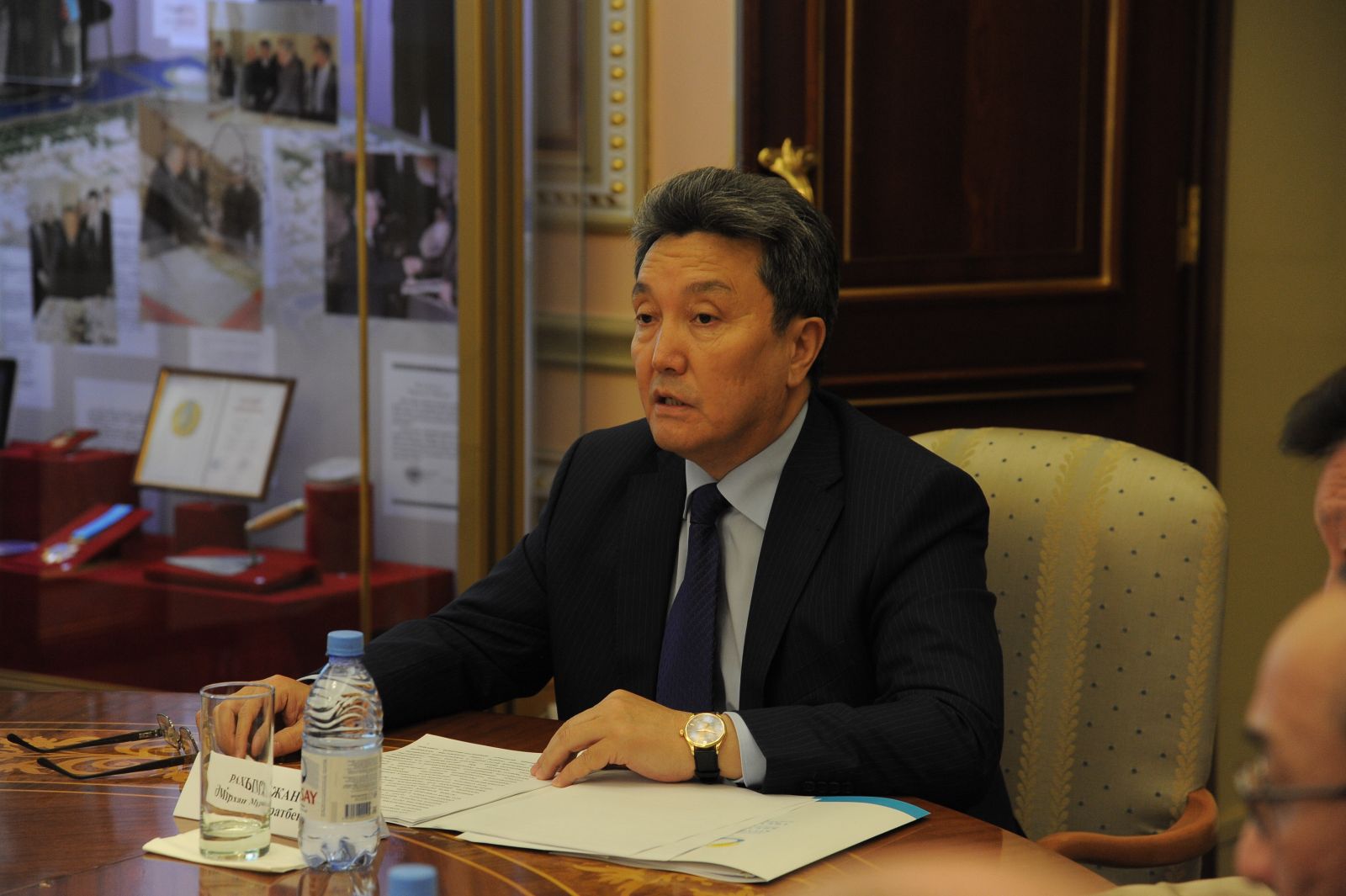 The deputy of the Mazhilis of the Parliament of the Republic of Kazakhstan, candidate of political sciences Sapar Akhmetov noted in his speech that the transfer of the capital gave a powerful impetus to the economic development of the city.

Convenient location in the center of the Eurasian continent makes Astana an economically advantageous transport, communication and logistics center, a kind of transit bridge between Europe and Asia.

The creative director of the architectural firm “SA Architects,” the honorable architect of the Republic of Kazakhstan, Professor Vassily Toskin, devoted his speech to the tasks and problems facing the State Commission of the Republic of Kazakhstan for the redeployment of higher and central state bodies in Akmola, which he worked with since 1995 to 2000. From the Commission's submission, the President of Kazakhstan adopted decrees that introduced amendments to the tax legislation of the republic and promote the flow of new investment flows into the city's infrastructure. In addition, it was possible to quickly ensure the transfer to the new capital of the highest authorities. Amanzhol Chikanayev, the professor of the faculty of design of the architectural faculty of the Kazakh Agrotechnical University named after S. Seifullin, drew attention to the features of designing the master plan of Astana. 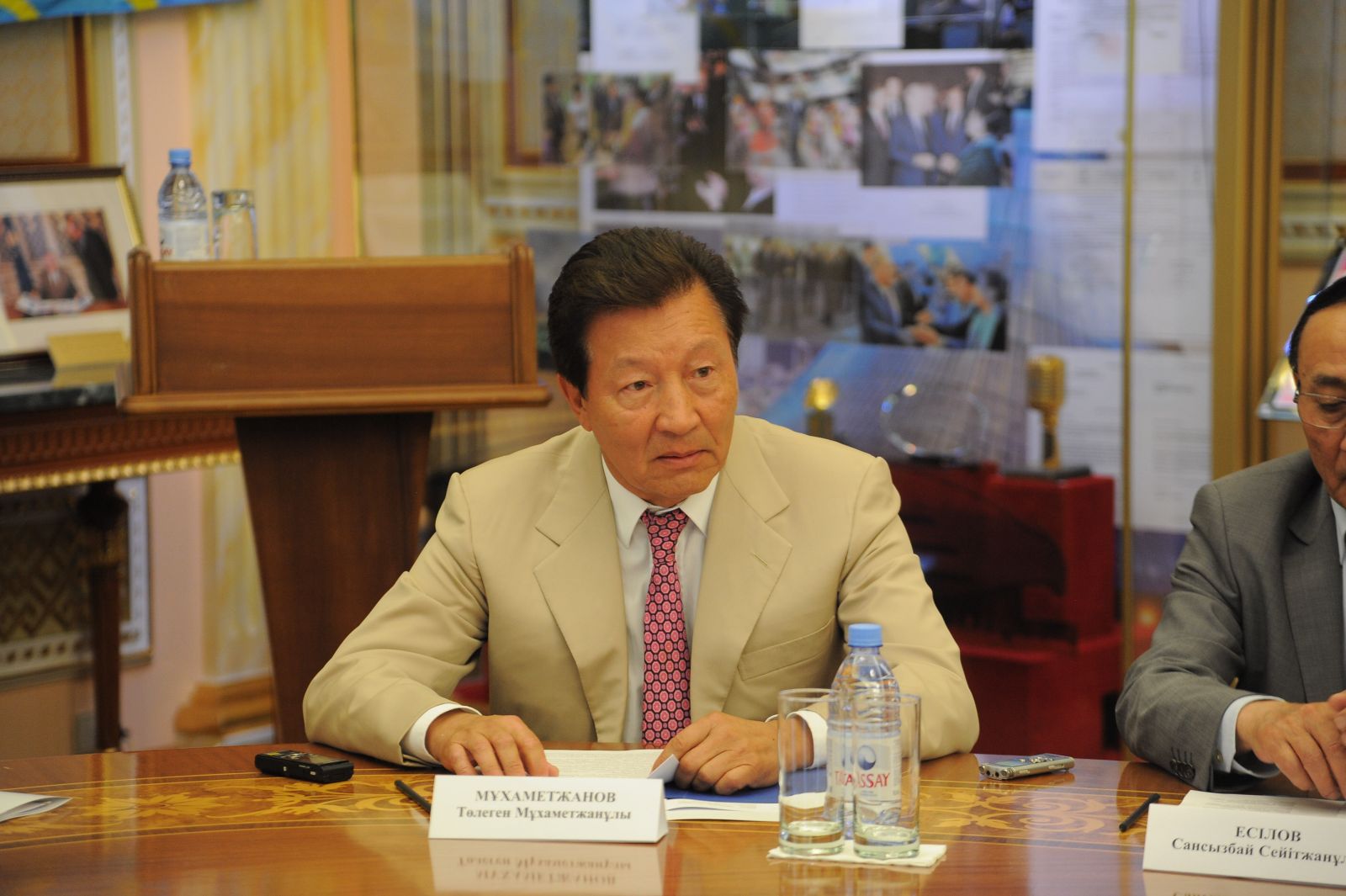 The speech of the director of the Archeology Research Institute named after K.A. Akishev ENU named after L.N. Gumilyov, candidate of historical sciences Maral Khabdulina is devoted to ancient history of Astana. Archaeological research confirms that "the most ancient evidence of human habitation here refers to the Stone Age." "Since 1997, in the territory of Astana and the Akmola region archaeological research is conducted by the Esil archaeological expedition of the ENU named after L.N. Gumilyov. The largest object of the study is the town of Bozok (7th-16th centuries), the Sygnak sanctuary was excavated on Sygnak Avenue, and the burial ground of the Bronze Age and the early Iron Age mound in the Kuigenzhar tract", Maral Khabdulina noted. Architects take into account the archaeological sites and inscribe them on the main axis of the capital's development: the past (Bozok), the present (the central square with Ak-Orda), the future (campus).

Executive Director for Science of JSC "Kazakhstan Center for Public-Private Partnerships", candidate of economic sciences Azamat Nurseitov noted in his speech that Astana since 2015 became a donor of the republican budget, transferring 900 billion tenge: "This is only the first step. I think, on the development of the city's economy, it can grow. Accordingly, in GDP, the share of Astana is 10%. Astana becomes an international city, attracts the attention of tourists within the framework of EXPO. The most attractive industries for Astana are primarily small and medium businesses: services, industry, and logistics. Considering that transport corridors connecting the West and the East and South with the North will pass through Astana. Within the framework of the “Nurly Zhol” program, the task is to connect Astana with the regional centers of the country. And this work is being conducted today." 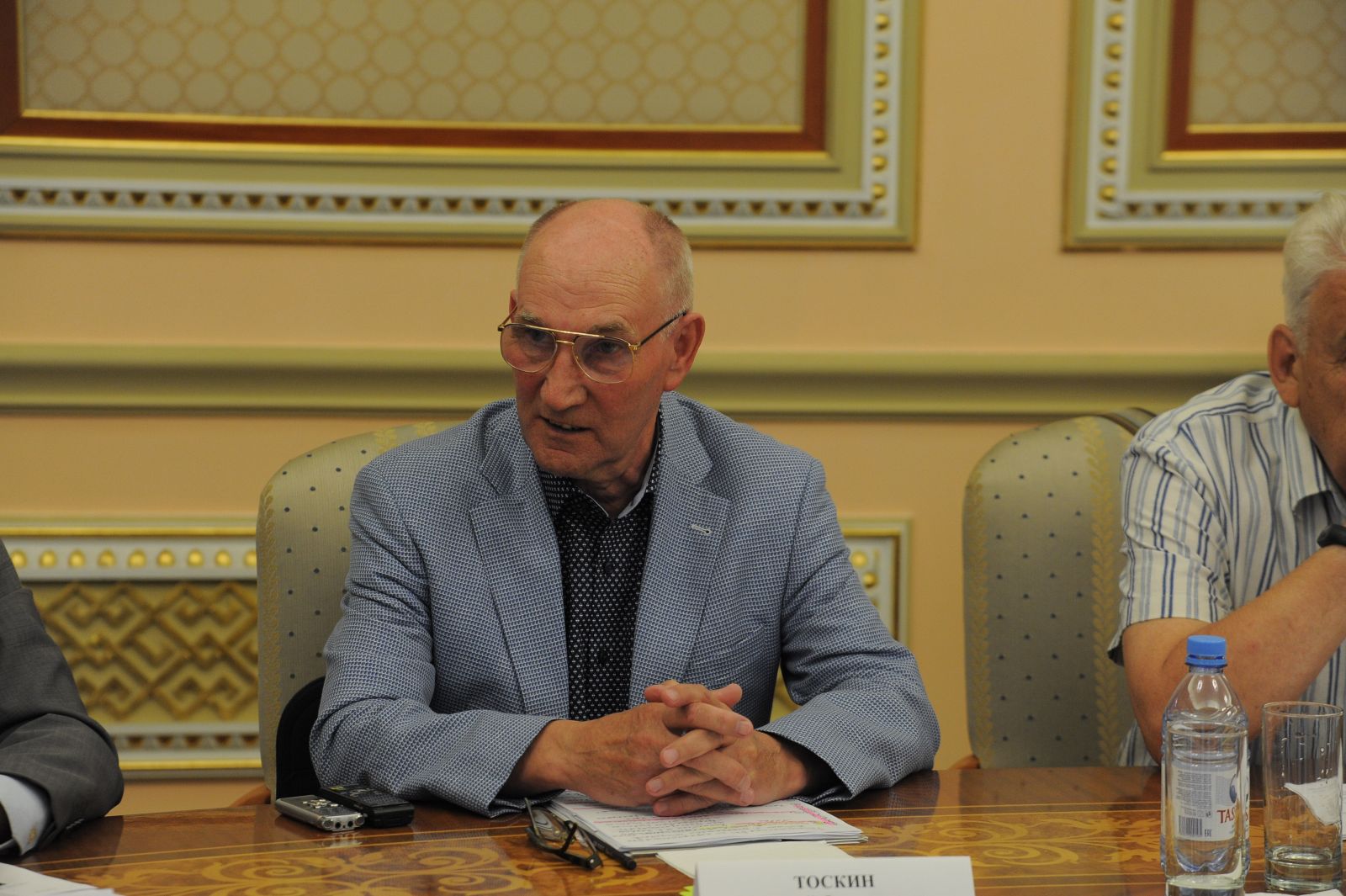 The deputy director of the Library of the First President of the Republic of Kazakhstan - Elbasy, Ph.D. in Political Sciences Timur Shaymergenov noted in his speech that the capital today demonstrates to the whole world the potential of a new, self-confident Kazakhstan. An exceptional role in the creation of Astana belongs to the First President of the country N.A. Nazarbayev.

The Deputy Directors of the Elbasy Library, Candidates of Historical Sciences Kulyaysha Aktayeva and Botagoz Kaipova dedicated their speech to creative and future-oriented concept of the construction of the capital. 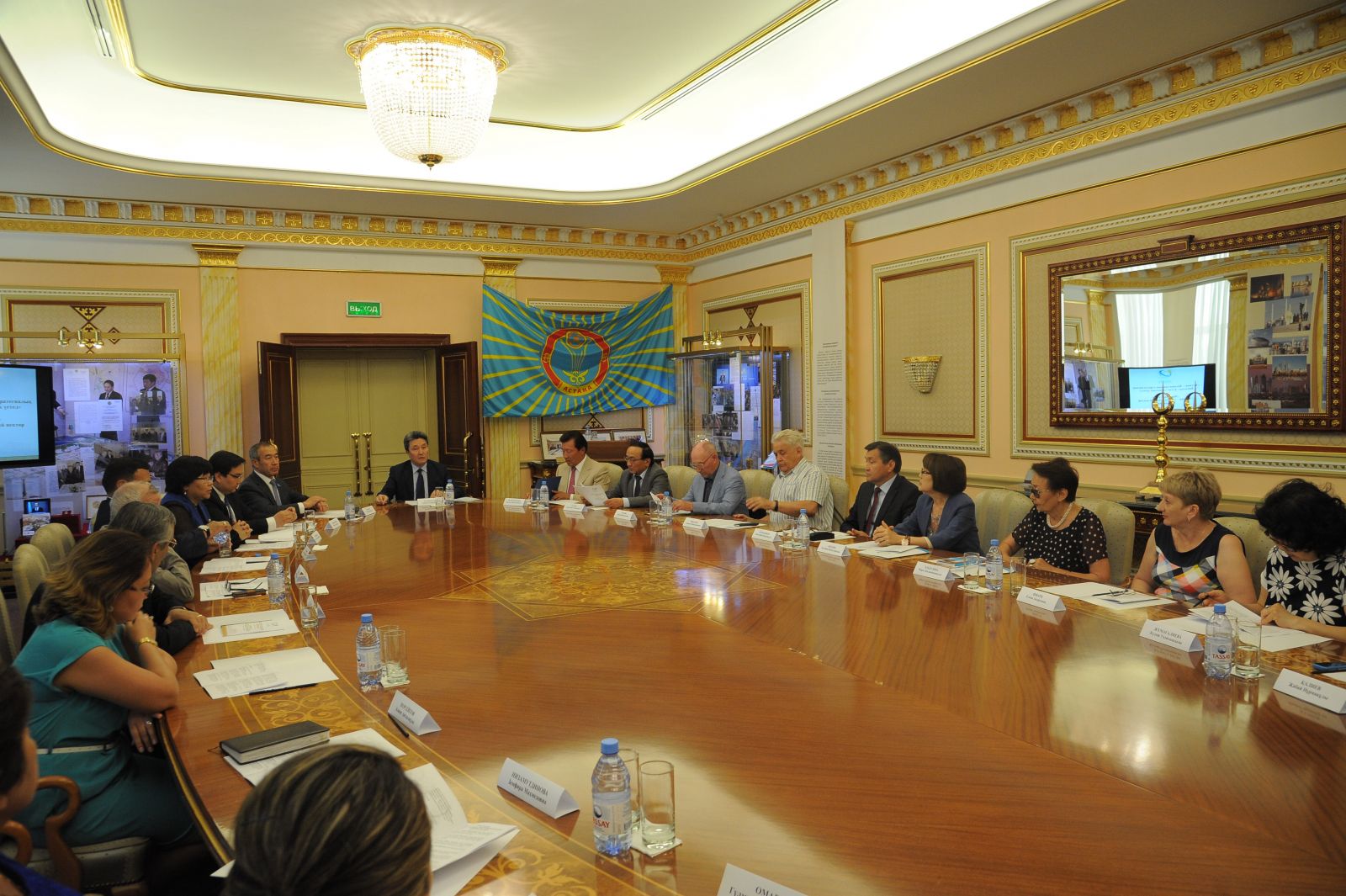 The chairman of the Astana city branch of the Republican public association "Organization of veterans", candidate of economic sciences Sansyzbay Yessilov shared his memories during the round table.

The participants of the "round table" in the course of the discussion came to the unanimous opinion that Astana is for us an inspiring symbol of unity, solidarity, belief in our own forces, incredible opportunities for our people. In our capital, as in a mirror, reflected the fundamental changes that have occurred in our state, economy and society during the years of Independence.