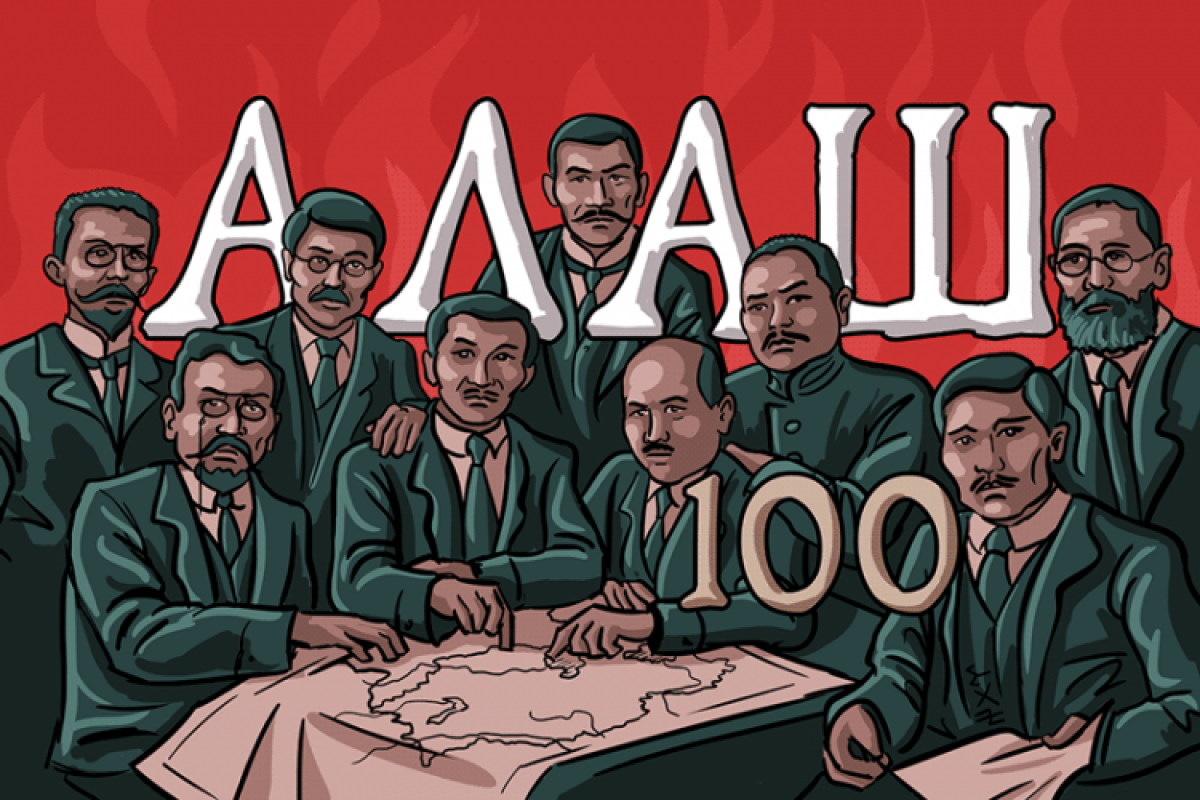 In the pre-revolutionary period, not many Kazakhs went on the path of healing people. At that time - this direction was chosen by Abubakir Aldiyarov who became one of the leading doctors

Abubakir Bermuhamedovich Aldiyarov was born in Saroysk Volost of Nikolay district of Turgay region (now Karabalyk district) in 1879. He received his primary education from the aul mullah. Studying at the Turgay craft school for Kazakh children, the most famous Kazakh enlightener Ybyrai Altynsarin taught him.

Altynsarin insisted that Abubakir, after graduation, be sent to the gymnasium; by the way, he finished the school very successfully. He entered the Orenburg Men's Gymnasium in 1891, where he lived in a boarding school. Abubakir showed great desire to study when he studied at the gymnasium. He was easily given languages, mastered Latin, French and German, he knew Russian perfectly.

After graduating the gymnasium successfully in 1889, he entered the medical faculty of Kazan University. Documents of Aldiyarov showing successes in medical disciplines, in particular in surgery, diagnostics, pharmacology, therapy are still kept in the archives. 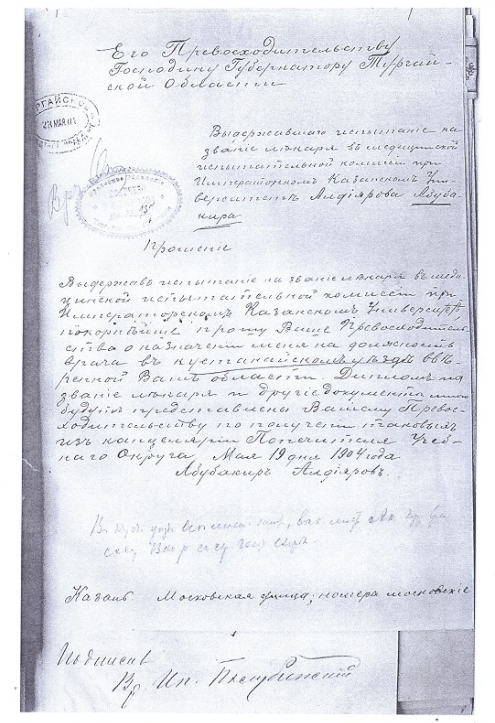 A. Aldiyarov's request to the governor of the Turgay region about his appointment as a doctor. Kostanay regional museum of local history

In his student years, he experienced serious financial difficulties, because his father did not help him because of disobedience. The latter wanted his son to study jurisprudence. The scholarship came irregularly from the funds of Governor-General. He became to work at hospitals and the knowledge received during that time was very useful to him working as a diagnostician.

He graduated Faculty of Medicine in 1904 with a silver medal. Then certificated young specialist was sent to the city of Aktyubinsk, and then to Kostanay. But three years later he moved to Troitsk, where he works as a doctor at a local city hospital. At this time, he manages to show his professionalism as a physician-therapist, ophthalmologist, surgeon, children's doctor, and gynecologist. I would like to highlight the most successful operation to Sultanmakhmut Toraigyrov, blinded to both eyes. Aldiyarov managed to restore sight to the well-known Kazakh poet.

In addition to medical activities, he, as a member of the "Alash-Orda" party, was actively engaged in public work. In December 1917 in Orenburg at the general Kyrgyz party congress, he was elected chairman of the Kostanay branch of the Alash-Orda. This is evidenced in 1929 by the collection of documents "Alash-Orda", where his name appeared in the police reports on the activists of the movement.

Seydallina Azhar Sultanovna, a Russian language teacher in primary school, the wife of Abubakir, graduated from the Troitsk Women's Gymnasium. In 1916, the volunteers of the Alash-Orda party left for Belarus, A. Aldiyarov together with A. Seydallina, also went to the Pinsk marshes, where the mobilized Kazakhs worked. They worked in terrible conditions. This is a marsh climate, hard work, epidemics, meager food, unaccustomed to them, ignorance of the language.

Aldiyarov here shows himself as a principled, diligent person who seeks to help everyone. He showed himself as a strong personality. Sending the mobilized Kazakhs home, they (Alash-Orda Party members) always tried to do everything necessary for everyone to get there safely, getting them tickets for the train, supplying them with food for the road. 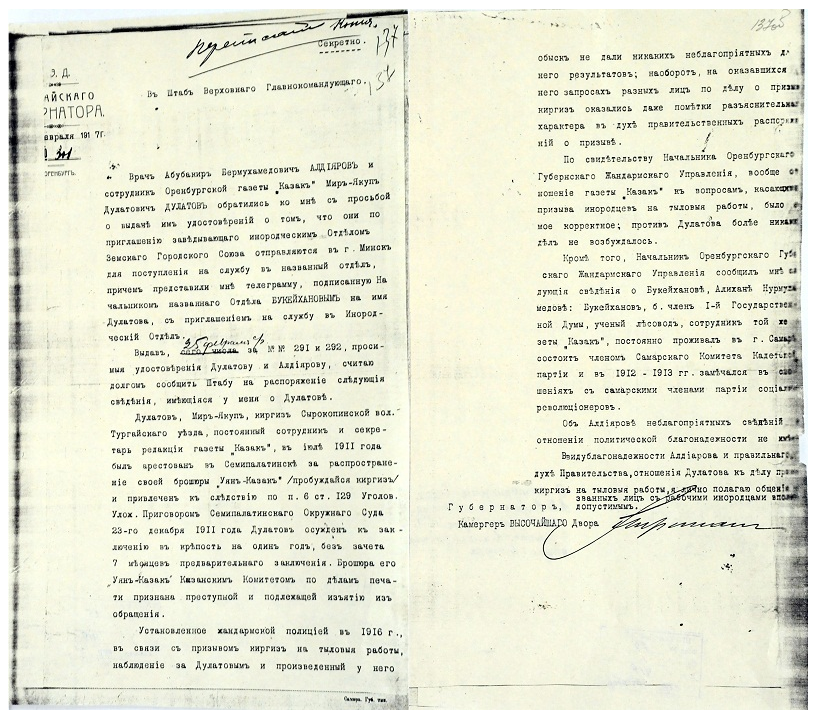 “As parents they rented rooms at inns in St. Petersburg, met the mobilized, fed them, explained to them how and where to go, what to take with them for the road,” often recalled their daughter Aidansulu. The Aldiyarovs themselves told her about it.

From the city of Troitsk in 1928 they were deported to Ust-Kamenogorsk. All that Abubakir could earn in 24 years, was confiscated, allegedly there is no separate act on his property and his father - Bermuhamed. They had to repeatedly apply to the KazCEC; as a result they were able to return only part of the property. In a new place, in Ust-Kamenogorsk, he worked as a therapist at the city infectious diseases hospital and was the head of the children's clinic. And he also took sick people in his house. There was always a big queue.

For patients who could not explain the reason for addressing a doctor in Russian, the Kazakh doctor was a rarity. Malaria, rampant at that time, was the main cause of ailments in humans, it caused severe complications. Urban physicians struggled with this dangerous disease, led a constant propaganda against the spreader of the infection. Aldiyarov received gratitude for this hard work from local authorities.

Abubakir, despite frequent conflicts with the head of the city hospital Klochkova, who absolutely had no idea about medicine, since she had no education, among colleagues enjoyed the reputation of a professional in his field.

In 1938, he was convicted on false charges and sentenced to death, and only September 20, 1956, the honest name of the Kazakh doctor was restored, he was rehabilitated (posthumously).