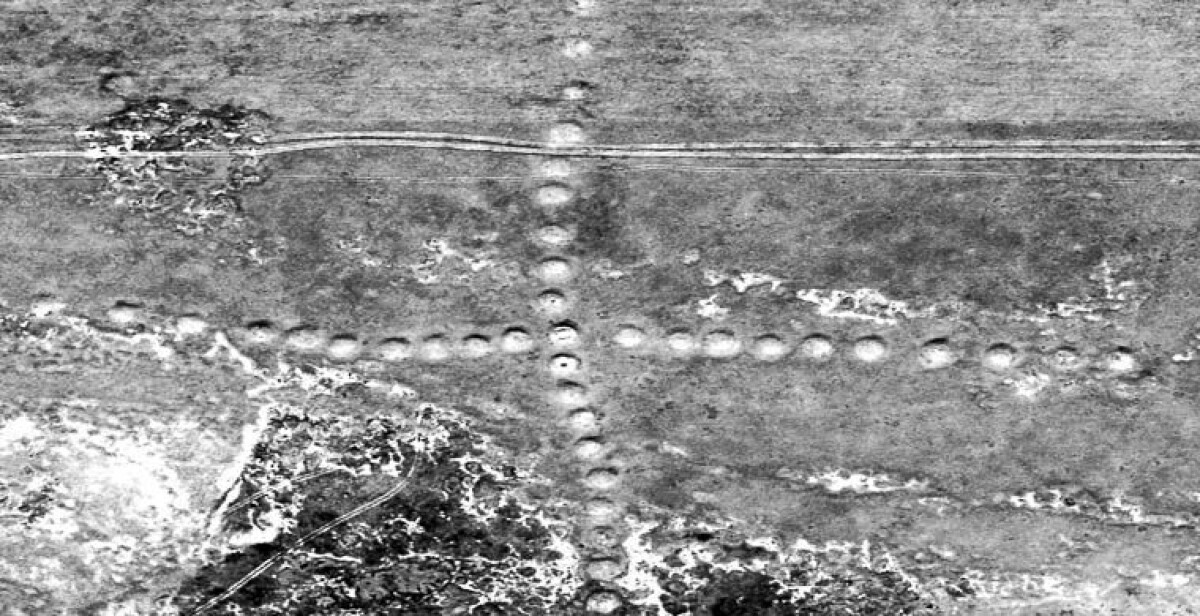 With the help of satellite shots in Kazakhstan the giant pictures made, according to certain data, 8000 years ago were revealed. In the Turgay steppe the giant square form 101 mound burials of a huge

The technologies of the space era allowed to disclose the ancient mystery on the land.

The satellite photos NASA of the northern steppe of Kazakhstan revealed the colossal land works — geometric figures in the shape of squares, crosses, lines and rings in size of football pitches visible only from the air.

The largest geoglyph (scientific name of such pictures) is placed near the settlement of the neolith epoch and represents the giant square from 101 mound burials; its opposite corners are connected with the oblique cross. The figure comprises the area bigger than the Great Pyramid of Cheops.

Another figure — three-pointed swastika and on its ends the zigzagged figures are placed. Totally, in Turgay region of Kazakhstan there are at least 260 similar geoglyphs, created from the burial mounds, entrenchments and bulwarks, represented in five main forms.

Geoglyphs were discovered for the first time in 2007 by the Kazakhstani economist and enthusiast Dmitry Dey. Now, at last NASA issued the distinct images of figures. It is impossible to define the age of figures accurately. Various methods of research show various results.

According to the ‘mainstream" point of view the age of figures — 8000 years, however, other sources date them back to 800 years BC or, in general, relate them to the Mediaeval epoch.

If to agree with the oldest version of origin, in the creation of figures the Makhandzhar neolith culture prospering in the region from 7000 to 5000 y. BC was part art and part. But, the scientists doubt in that as the culture was nomadic, and for construction of such geoglyphs it was needy to stay at one place.

The designation of figures was also not understandable. Obviously, those were mainly solar symbols. The opening was an accident. In March 2007 Dey was watching the program “Pyramids, mummies and tombs” on Discovery channel.

“Pyramids are all around the world. And in Kazakhstan they should be”, he thought and started searching with the help of Google Earth.

He could not find any pyramids. But in 200 miles to the south he saw something intriguing — a giant square which side length was about 287 m. The square corners were connected by dashed lines creating X.

At first Day thought that they may be the remnants of a Soviet experimental setting of the times of the clearing. But, next day the researcher saw the second giant figure, at this time in a svastika-like form. Till the end of a year Dey found eight more squares, circles and crosses. By 2012 there were 19 of them. Now, at his site there are 260 geoglyphs given.

In fact, they are so giant that it is almost impossible to see them form the earth. Burials made in one of mounds did not reveal anything. However, the artifacts of the neolith settlement at the age of 6000 to 10 000 years, including spearheads were found.

“In the near future we will get the shots of geoglyphs of a higher quality, this task is included into the schedule of the works of the ISS crew”, reported Dey.

Scientists strive to include the geoglyphs into the list of the UNESCO World Heritage.