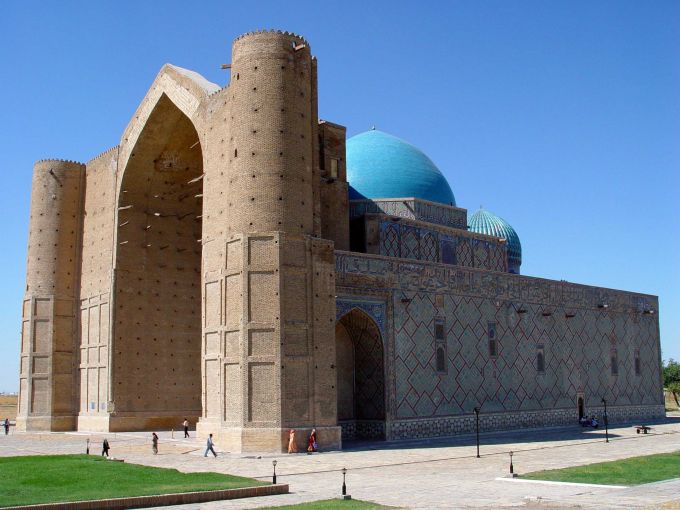 A look back at the past shows, that considerably amount of holy places of Qazaqstan are located in the south of Qazaqstan.

The first reference to the settlement, located on the place of present-day Turkestan, dates from 500 AD. Turkestan’s old names were Shavgar or Shavagar (X century) and Yasy (XII century). At that time Yasy was a fortress city. In the XII century a Sufi poet, philosopher Hoja Akhmed Yassaui lived and after death was buried there. Tamerlane, who was an architect of the Timurid empire, ruling Central Asia, in the period between 1396 – 1398 started to raise a mosque near the mausoleum of Hoja Akhmed Yassaui in Yasy. However, he could not do it straightway. At first, he had to make the mausoleum of Arystan Baba, another key figure of Islamic world, originated from Turkestan. Saint Arystan Baba, in some way, was the forerunner of Hoja Akhmed Yassaui. The Legend says, that the Prophet Mohammed gave his prayer beads to Arystan Baba, who, handed them over to young Hoja Akhmed Yassaui, when the appropriate time came.

As legend says, Tamerlane’s idea on building mausoleum for Hoja Akhmed Yassaui could not come true to some unclear reasons. All his efforts on doing that failed. Construction works were unsuccessful. Tamerlane was confused and one day he saw a dream, he was told firstly to set up Arystan Baba’s mausoleum and then to go ahead with construction of mausoleum for Hoja Akhmed Yassaui. He followed advice given him. This tradition is kept by now by people, who want to see this place. Besides that, when Turkestan was called Yasy, the city was known in the East as a spiritual hub “Azret Sultan” (or Hazret Sultan).

The first reference to Turkestan dates back to the XV century. Between the XVI—XVIII centuries, during the period of the Qazaq-Dzungar wars, a significant historical part of the city near the Mausoleum was crushed, but the shrine remained intact.

In total, there are 36 rooms, including the central hall, in the Mausoleum, covered by the largest brick dome in Central Asia of 18 meters in diameter, and the height of the mausoleum in the central part is 44 meters.

Inside, you should definitely see a huge ritual water bowl with a diameter of almost three meters and a weight of two tons, which is produced from an admixture of several metals, and an impressive bronze lamp, cast in 1397. The bronze lamp is a gift from Tamerlane. The water bowl is filled with sacred water from the well, which is placed in the well-room.

Other interesting premises of the Mausoleum are the Grand Palace with the khan's throne and scepter, the Small Palace, where the pantheon of the Qazaq khans is placed (43 tombstones), Hoja Akhmed Yassaui’s tomb, the Small Mosque - the main prayer area, as well as ancillary rooms: the well-room and the dining room. A visitor can find in the dining room antique stoves, a cauldron and tableware and cutlery, made of wood. 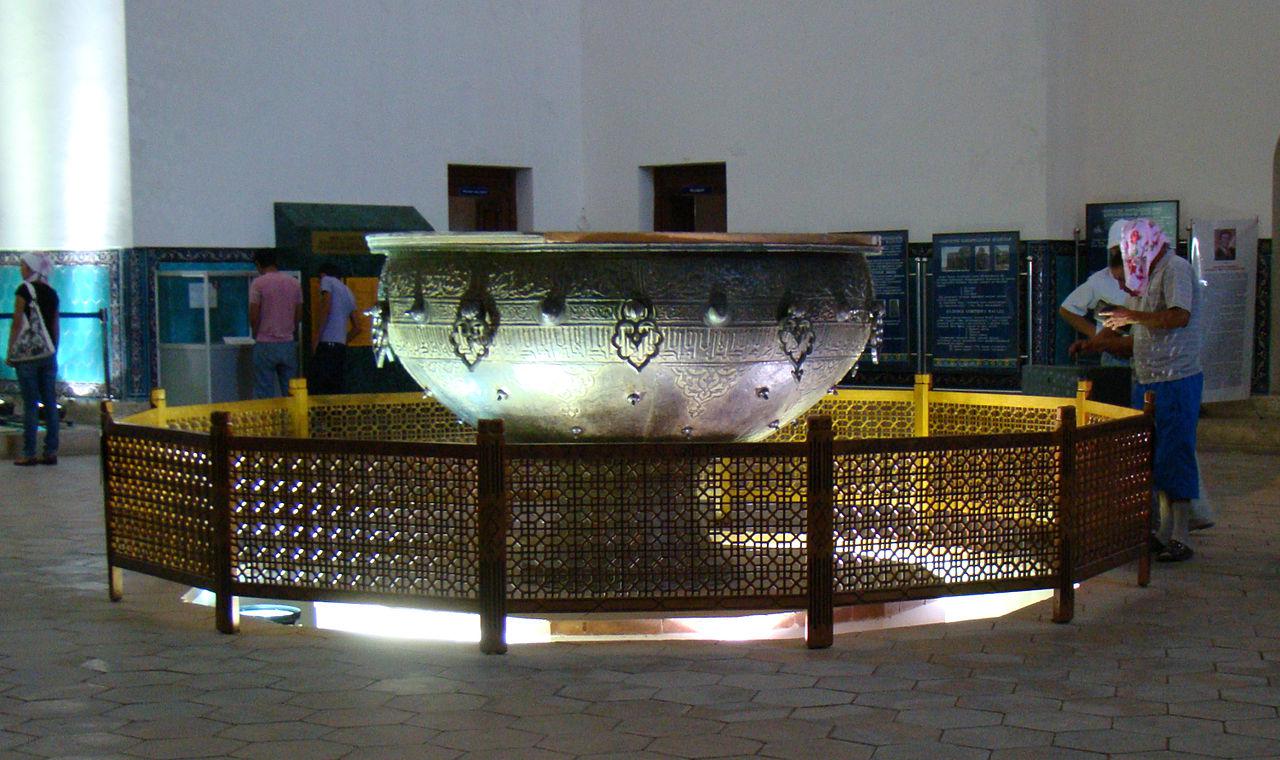 Hilvet, the underground mosque of Hoja Akhmed Yassaui, is considered a sacred Sufi underground structure. In this place for five centuries, the followers of the Yassaui school conducted their ritual ceremonies. Usually Sufis, dhikr performers, stayed there for 40 days in solitude and prayed for God.

Underground Hilvet is located 150 meters from the Mausoleum of Hoja Akhmed Yassaui. It is a semi-underground extensive structure with different rooms: for prayers, for the round-the-clock stay of pilgrims, for ritual ceremonies.

In the early 40s of the twentieth century, Hilvet was demolished into bricks for the construction of a butter factory in Turkestan. But a small part of the ancient structure still remained in its original form. 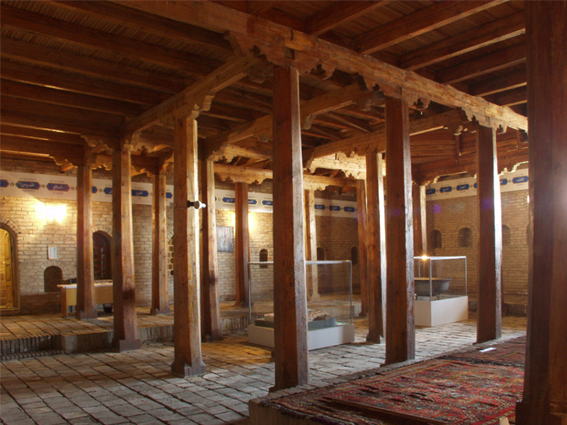 The mosque does not work as intended. It is a museum at present time. So anyone who wishes can visit it.

The Arystan - Baba Mausoleum is interesting for rich remains of architectural beauty of the XII-XIV centuries. He was an outstanding person. Legends say that he was a follower and close friend of the Prophet Muhammad. He was a Qazaq hero. He liked gardens and he taught the Prophet Muhammad to plant them.

Arystan - Baba relinquished life and was entombed here in Turkestan region. Probably at that time his mausoleum was set up, but by now there is no data about it. According to some researchers, he underwent an evolution similar to the Sairam mausoleums. Tamerlane built a new building instead of collapsed one in the XIV century.

However, it has not survived to our time. Currently, Arystan - Baba mausoleum takes an area of 35x12 meters, it is built of baked brick. In the decoration of the facades curly brickwork applied. 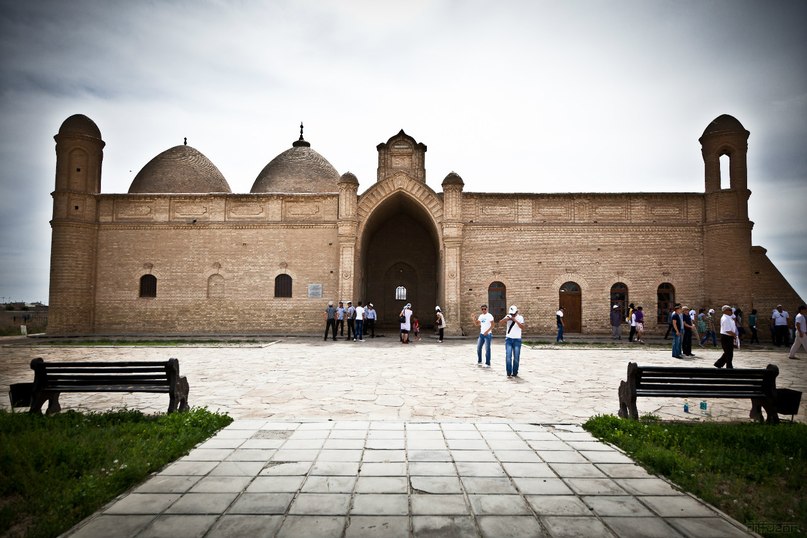 The current Mausoleum was set up at the beginning of the XX century. The portal is the most expressive element of the architecture of the Arystan-Baba Mausoleum. However, it is not an ordinary Central Asian portal-peshtak with an arched niche in a rectangular frame, it is a new architectural form made up of decorative elements borrowed from the European and Russian architecture of that period. We see, that new trends in architecture influenced the mausoleum of the Muslim saint.

A tomb was also erected for the daughter of Hoja Akhmed Yassaui, Gaukhar. The woman became famous thanks to her gift of healing. Gaukhar always treated people, but she could not have children.

As legend says, she was buried at the site of the murder of her brother. He came to the well to take water. At present time women visit the sacred well hoping to be healed and have children. Usually they pour water all over their head and pray for Gauhar. It is interesting, that the water dries on the body in a trice, and even in cold weather after such a procedure nobody gets cold. People who visited this holy place claim that the healer really helps women to have children. The grave of Gaukhar is located on a high hill and has mystic power. 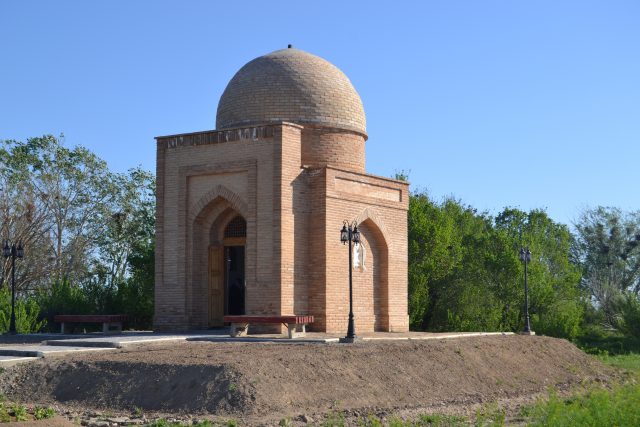 The plenitude of the settlement took place between I - XIII century AD. People lived there by the beginning of the XIX century. Otrar’s location is very comfortable; it is situated in a place, where various cultures cross paths.

From the one side it represents itself a center of agricultural region thanks to Arys and Syrdarya rivers, from the other side it served as a fortress for the nomadic people, who inhabited the foothills of Karatau mountain.

“It is difficult to find a more favorable and more dangerous position in Central Asia,” used to say the famous archeologist A.N. Bernshtam about the status and location of medieval Otrar.

Now we could re-enter the ancient site and walk down the streets of the Otrar, we could see there ruins of castles and watchtowers. The excavations shows, that the territory of the oasis city in the XI-XII centuries was closely built up with houses grouped into quarters. A sewage system functioned in the city, sanitary and hygienic places were on obligatory basis at each household.

At that time, there was a process of Islamization of South Qazaqstan, which primarily covered the urban environment. Muslim cemeteries, mausoleums appeared near the cities. Most of the cities became home to mosques. Studies by archaeologists have shown that the cities of Qazaqstan were well developed in terms of their economy, culture, or usage of their potential in comparison to other cities of Central Asia. Arabic writing and language itself became widely spread. A number of schools and libraries were opened with assistance of mosques.

In the Middle Ages, public buildings such as baths began to occupy a great place in urban development. This trend in the cities of Central Asia is recorded in the VIII century. There were a lot of baths in the big cities. On the territory of rabad of Otrar, two baths of the XI-XII centuries were excavated.

Over time, droughts and frequent forays of the Dzungar troops brought the people to leave the city.

In addition to the above-mentioned historical sites, there are many other important historical and cultural monuments in Turkestan. You can find there the tombs of the Qazaq khans, like Yessim Khan, Ablai Khan, Abulkhair Khan and others, Kazybek Biy (one of the creators of the first set of Qazaq laws “Zhety Zhargy”), and other state political, military, religious and other figures who contributed in the formation of the Qazaq statehood.

There are also many other Islamic sights in the historical center of Turkestan: the Zhuma Mosque Museum (XVIII century), the Oriental Bath Museum and the Turkestan City History Museum, the Museum of Archeology and Ethnography, the Rabia Sultan Begim Mausoleum of the XV century. The museum-reserve Azret-Sultan, as well as the Railway Station, built in 1905 will be very interesting places to see.

There are always a lot of people in Turkestan, mainly tourists from all over Qazaqstan and Central Asia, because the three-time pilgrimage to Turkestan is recognized among Muslims of Central Asia as Hajj to Mecca. At the same time, many tourists come here from abroad.

How to get to Turkestan

The largest transport hub, located near to Turkestan, is Shymkent. The city is located 180 kilometers away from Turkestan. You can get to Shymkent by plane, then take a bus or a taxi, which will take you to Turkestan within three hours.

At the same time, the major cities of Qazaqstan and Turkestan are connected by railway road; with Nur-Sultan directly, and if you are departing from Almaty, a transfer in Shymkent will be required.

Author: Aizhan Abilda
Use of materials for publication, commercial use, or distribution requires written or oral permission from the Board of Editors or the author. Hyperlink to Qazaqstan tarihy portal is necessary. All rights reserved by the Law RK “On author’s rights and related rights”. To request authorization email to mail@e-history.kz or call to 8 (7172) 57 60 13 (in - 1163)
Қазақша Русский English
MOST READ
Month Year
Burial mounds of the southwestern part of the Semirechye region
Union of the Archives and Library
The referendum on the Constitution is a significant stage of democratization
Heroic mothers of the great steppe
Philosophy of the Emblem
The rural akims: the country's hope is in the elections
Kazakh historical drama Tomiris premiered in Istanbul
Stolypin about the worries and hopes of immigrants to the Kazakh steppes
ALASH IDEA IS THE PROTECTION OF KAZAKH STATEHOOD
A tireless explorer of the Kazakh land
SWITCHING TO THE LATIN ALPHABET – UNITE ALL KAZAKH PEOPLE
Kunaev Dinmukhamed Akhmedovich
People who eat horses will kill you
Kazakhstan's participation in the Winter Olympics has a long history
Rebooting a field of science and education
Materials on theme
MY GRANDFATHER – VETERAN
Palace of Tselinniks built in the heart of Saryarka
Ger-aga about mental crisis
Remembering Turar Ryskulov