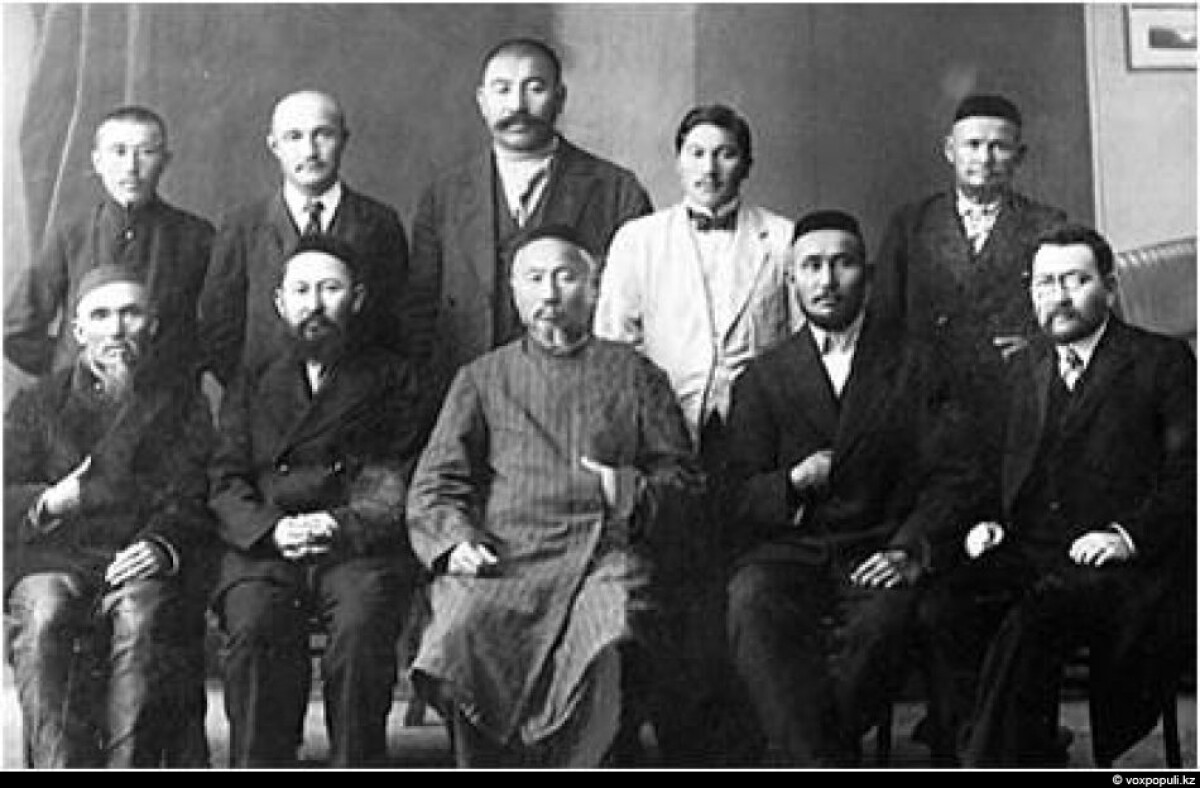 This article reflects on the process of formation of the Kazakh national intelligentsia along with the state of education up to the beginning of the 20th century.

With socio-economic and political processes that took place in Kazakhstan during that time, they had a profound impact on the spiritual and educational sphere of life of the Kazakh society.

The formation of the national intelligentsia was a complex and lengthy process, hampered by the colonial regime, the discriminatory tsarist policies, which adversely affected the quantitative growth of specialists in the field of the national economy, particularly in industry, culture, education and other important spheres of public life. The socio-economic and political processes that took place in Kazakhstan at the beginning of the 20th century had a profound impact on the spiritual and educational sphere of life of the Kazakh society. The radical changes in the socio-economic and political life of Kazakhstan contributed to a significant transformation of the public consciousness of the people and caused the awakening of national identity, defining the formation of new ideas, thoughts, and views in the Kazakh society. The beginning of the 20th century was a new stage in the development of intellectual potential. Culturally, this was expressed in the assimilation first of representatives of the social elite, a narrow stratum of people, European culture and new values. Representatives of the national intelligentsia in the course of receiving education in European educational institutions were influenced not only by the national movement in the East but also by the bourgeois revolutions of the West, the growing pressure of oppositional-minded compatriots to the tsarist regime.

"The emergence and development of the periodical press, in turn, contributed to the development of capitalism, commodity-money relations, transport and communications, further colonization of the region" [1].

During this period, the competition between the nascent national bourgeoisie and the ruling Russian bourgeoisie, as well as the penetration of foreign capital, necessitated the reform of the education, press and communication system. One of the significant centres of democratic culture, which had a great impact on the educational and cultural development of the region, was the Kazan University, which became the centre for the development of education. Studying at the said educational institution had a positive impact on the formation of the scientific worldview of the representatives of the national intelligentsia, on the formation of the national language and literature, and also had a great impact on educating the younger generation in the spirit of the unity of people.

It is necessary to emphasize that the very process of creating a system of public education, which took place in difficult conditions and was not unambiguous but was of great importance for the formation of the first cadres of the national intelligentsia. After graduating from Russian educational institutions, representatives of the Kazakh intelligentsia spread their knowledge and enlightening ideas among the young people of their native land.

It should also be noted that the small majority of the new intelligentsia took the path of protecting the interests of the Kazakh society and opposed spiritual enslavement. The representatives of the national Kazakh intelligentsia, who had a keen social, intellectual and moral sense, brought to the forefront the problem of the position of the individual in society, the issue of the attitude of the people towards the creation of a new society.

At the beginning of the twentieth century, Kazakhstan had a complex political and social situation. The first Russian revolution of 1905-1907, the first world war of 1914-1918, the national liberation movement of the Kazakhs of 1916, the development of capitalism and, finally, the Great October Socialist Revolution were important milestones in the new history of the Kazakh people. A small national intelligentsia in these conditions began the fight for independence and freedom and getting rid of the double oppression of the colonial yoke of tsarism and the local patriarchal-tribal clan. The main achievement of the Kazakh intelligentsia was that it noticed the growing Russification on time and began searching for means to bring the Kazakh society into motion, using for this purpose the social and political freedoms granted by the first Russian revolution; the intelligentsia sought to rescue the Kazakh people from tsarist oppression and patriarchal-tribal backwardness by shedding the light of knowledge and progress. Undoubtedly, it was a path of difficult struggle, complex conflicts and searches [2].

At the beginning of the 20th century, educational activity in the spirit of a democratic cultural tradition was vigorously developing in Kazakhstan. It started with the opening of primary schools, especially Russian-Kazakh ones. Kazakh youth were trained in secondary special educational institutions of Tashkent, Orenburg, Omsk, and also in Kazan, Petersburg, Tomsk University, and later many of them were sent for teaching activities in rural areas, and some - in medical, cultural, educational and administrative institutions.

The national Kazakh intelligentsia focused the people on the development of the country on the path of independence, conducted propaganda for gaining knowledge, engaging in science and art. In this process, a great role was given to Kazakh literature, which contributed to the portrayal of the life of the Kazakh people and the protection of its interests.

Opposite processes - the intensive development of new trends in public life - on the one hand, and the existence of strong foundations of feudal antiquity - on the other created a rather complex situation in the literature. In the conditions of a sharpened class, ideological struggle, the division among writers became more acute, which openly raised public problems in their works and in polemics. The main motives of the works of representatives of the reactionary trend in the Kazakh literature of the twentieth century were the idealization of the past, the preaching of Islam, the support of the antipopular policy of autocracy. Prominent representatives of the democratic trend - poets, writers, translators, journalists, social and political figures such as Sultanmakhmut Toraigyrov, Mukhamedzhan Seralin , Sabit Donentayev, Spandiyar Kubeev, Beimbet Mailin, Ahmet Baitursynov, Mirzhakyp Dulatov, Shakarim Kudaiberdiyev, Magzhan Zhumabayev, Zhusupbek Aimauytov, continuing the traditions of Abai Kunanbayev in their literary works, and publicistic statements on the pages of revolutionary democratic publications ridiculed the vestiges of patriarchal relations, religious fanaticism, fought for social equality, opposed the colonial policy of tsarism and capitalist exploitation, called upon the people to enlighten, settled and agriculture, raised the issue of the emancipation of women.

At the beginning of the twentieth century, Kazakhstan's cultural ties were reinforcing. Progressively-minded poets and writers, increasingly turning to Russian and West European classics, began translating the works of Pushkin, Lermontov, Tolstoy, Krylov and other leading Russian classics, including their translations and transcriptions from Western European culture. The genre composition of Kazakh literature also became diverse: it was during this period that the first Kazakh novels, dramas, stories were written, critical articles, essays began to emerge for the first time, and the satire developed. Kazakh literature has stepped onto a qualitatively new stage of development, and the publication of books in the Kazakh language had had a significant positive impact on the development of education in the region. In a short period of time, there were about 200 books published, including translated works of Russian writers. There were also samples of Kazakh folk art, compositions of the East classics, religious and heroic poems [4].

It should be noted that in order to study the history, nature and geology of the region more thoroughly, departments of the Russian Geographical Society, statistical and other scientific and industrial committees were created in Kazakhstan; along with Russian scientists, Kazakh researchers such as Ahmet Baitursynov, Alikhan Bukeikhanov, Bakytzhan Karataev, Zhakyp Akpaev, Zhahansha and Khalel Dosmukhamedov, etc., embarked on invaluable scientific works, which has been used as the most valuable sources so far.

To sum up, it is imperative to emphasize that since the period when there was an irreconcilable struggle between the ideology of chauvinistic colonialism and the ideology of freedom and independence, the public consciousness of the people was ambiguous and constituted a complex phenomenon. Actively disseminated by prominent representatives of the advanced Kazakh intelligentsia, the ideas contributed to the desire of society to develop education and culture, the formation of self-awareness, exerted a tremendous influence on the sense of justice, the morality of the people [5].

The Kazakh intelligentsia considered the protection of national and public values and interests to be the main task of their political activity. They were marked by the desire to establish an independent statehood, to free people from colonial oppression, to fight for public values, such as the right of every person and every people to freedom of self-determination and free access to the achievements of world educational practice and culture.