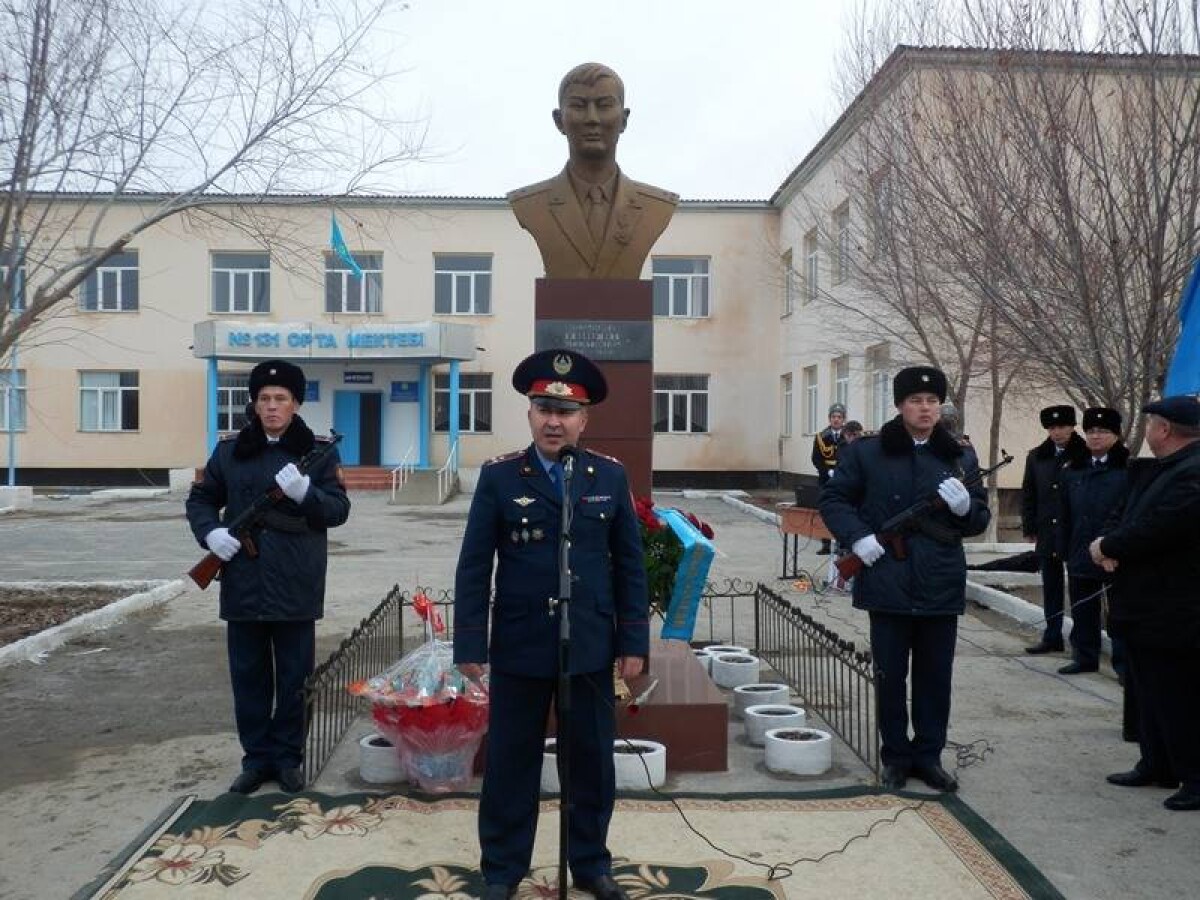 Everyone knows that service in law enforcement is complicated. Every day they face complex situations, they guard the peace of society. And many of those who died in the service of duty! Let's try to look at the data published in the domestic media over the past 25 years.

We remind you that between 1993 and 2016, 764 law enforcement officers were died while 2,186 policemen were injured. During the 25 years of the establishment of the internal affairs bodies, 1,093 officers of the law-enforcement bodies and the National Guard were awarded for their heroism and courageous actions against criminals. Of these, 115 employees were posthumously awarded state awards.

Gaziz Baytasov who died in Taraz in 2011, during the resistance to the terrorist, was awarded the title "Halyk kаһаrmаny" for the first time in the history of the creation of the Kazakh police. Public association "International Association of Police" proposes to do November 12 - Day of Remembrance of law enforcement officers who died in the line of duty. This is the practice that exists in the history of the world police. For example, in countries such as Australia, the United States, Canada, Israel, Russia, Ukraine, an annual Memorial Day for lost police officers was approved. In America, not even a day is spent, but a "week of remembrance".

A quarter of a century is a long time. During these 25 years, there are so many dead guards from bullets, at the hands of criminals.

The Ministry of Internal Affairs does not neglect the families of the deceased employees and honors the memory of their colleagues. So, let's remember the dead law enforcement officers.

1. Police sergeant Ibat Mumbayev was killed in 1992 in Uralsk, in time to catch a dangerous criminal. Exactly 17 years after this incident, his mother Akushtap stopped in a new one-bedroom apartment. This was realized thanks to the actions of the Regional Department of Internal Affairs.

2. On the monument for police officers established in Pavlodar there are names of 10 people. Namely, the captain of the militsiya of the Internal Affairs Department of the Kachirsky district - Akhmetkaly Tezekbayev, he died on August 1, 1997, having received a bullet in the back from a suspect who was about to be taken to the ROVD.

Yermek Kanzhygalin, captain of the internal service, was killed in September 1993, when three convicts were caught.

2008, July 26 Farid Kakabayev, a district inspector of the Kachirsky OVD, received a message on a mass fight during his holiday, and pursued one suspect. Then the criminal, climbing the fire escape, dropped the concrete slab on the head of the pursuing guard.

On October 19, 1997, the criminal investigation officer Assylbek Bizhanov delivered a particularly dangerous criminal to the surgical department of hospital No. 1, at that time four armed men burst into the room and shot a police officer.

The junior police lieutenant Yerlan Nurzhanov who was on duty in the Bayanaul district department of the interior, was killed on May 20, 1997 by masked men who broke into the duty unit.

An ordinary police officer, Yerbol Sembayev, died on February 3, 1994. At the traffic police post, the UVD of the city of Ekibastuz he stopped the car "KamAZ", at the wheel of which was a drunk driver. The policeman decided to send the driver for a medical examination, but he hit the guard with a knife in the back.

On April 7, 1995, with the protection of the external borders of the CIS countries, the soldier Private Kanat Yedrishev died heroically.

On June 21, 2015, during the performance of his duties, assistant to the district police officer, Senior Police Lieutenant Harkey Arly, died tragically.

3. Police Chief Manas Zhumadilov, assistant to the duty officer at the police department of the village of Boralday subordinate to the Department of Internal Affairs of the Ili district, died on May 31, 2000 from stab wounds while catching a criminal who committed a series of thefts. By presidential decree, one of the streets of the village of Boralday was named after him; he was awarded with the "Aibyn" order of the third degree posthumously.

4. Major of Police Turganzhan Turdiyev, senior police officer of the Criminal Investigation Department of the Internal Affairs Department of Enbekshikazakh district, died on February 10, 2002 from wounds received during the detention of an armed criminal. In 2002 he was awarded the Medal "For Bravery" by the President's Decree.

5. The assistant to the inspector of the District Police Department of the Public Security of the Department of Internal Affairs of the city of Kapchagay, Lieutenant Galym Tattibekov was killed by a serious injury, received during the detention of the murderer on July 25, 2008 in Kapchagay. He was awarded the medal "For Bravery" by the President’s Decree.

6. Assistant to the inspector of the District Police Department of the Public Security of the Talgar District Internal Affairs Department, Senior Lieutenant Yedil Adilzhan died of injuries sustained during the detention of an armed criminal on December 20, 2008. By presidential decree of 04.05.2009, he was posthumously awarded with the "Aibyn" Order of the second degree.

7. On November 8, 2011 in Almaty, hooligans deceived two policemen and shot them. On this fact, a criminal case was filed under the article "Terrorism". However, the policemen managed to detain criminals only on December 3 in the settlement of Boralday in the Almaty region. During the shootout during the detention, 4 terrorists and 2 Special Forces employees were killed.

8. In the same year on November 12, a resident of the city of Taraz committed terrorist acts. Two policemen who pursued the terrorist were killed at the hands of the criminal. When attempting to detain the 34-year-old Maksat Kariyev, the jihadist blew himself up. The police captain Gaziz Baytasov died on the spot. The captain, who died a heroic death, was posthumously awarded the title "Halyk kаһаrmаny". Also, a memorial plaque was opened near the building of the Zhambyl Regional Department of Internal Affairs in memory of the heroically dead policemen. On the memorial plaque there are photos of the heroes-policemen Gaziz Baytasov, Bolat Ayankulov and Zhaksybek Bayseitov and the Decree of the Head of State Nursultan Nazarbayev on presentation to the highest awards. On the same day, the city akim Bolatbek Orynbekov handed over the keys of the promised apartments to the relatives of the deceased.

9. In general, between 2011 and September 2012, as a result of terrorist acts, 74 people were killed in the territory of the Republic of Kazakhstan (of which 12 were police officers and Special Forces employees).

10. Police captain Yerzhan Akhmetov, senior inspector of the Arlan special purpose unit, died on June 12, 2013; he was killed by the death of the brave during the liquidation of an armed criminal. By the Decree of the President of the Republic of Kazakhstan dated 05.12.2013, he was awarded with the "Aibyn" Order of II degree posthumously.

11. Senior lieutenant Talgat Kozybayev, died heroically in the line of duty, posthumously awarded the Order of "Aibyn" II degree. Before school № 135, where he studied, an obelisk was placed. Also one of the streets of his native aul bears his name.

12. In 2016, an event was held in Pavlodar in memory of those killed during the service of police and military personnel of the National Guard. In the meeting, organized within the framework of the republican action "Hero of Today", the employees who distinguished themselves during the service of public order protection took part. They laid wreaths at the Memorial of Glory at the regional Department of Internal Affairs, honoring the memory of their deceased colleagues. Colonel Kairat Umbetov took part in the action, covering with his body a young soldier from an exploded grenade during training sessions.

13. In the same year, a mourning meeting was held in the Kazygurt district of the South Kazakhstan region. Residents of the village of Karabastau and police officers conducted the last trip of police lieutenant Meirambek Rakhmatullayev, who died as a result of severe injuries sustained during the events that took place in Almaty. We remind you that last year on July 18, 8 people died and 8 people were injured at the hands of armed terrorists in Almaty during the terrorist attack. The dead guards were awarded orders and medals in December last year.

14. On the night of June 30, as of July 1, 2016, unknown persons shot two police of village police station. Then, starting from July 1, more than 30 religious followers of the auls of Shubarshi, Sarkol, Kenkiyak were detained. During the re-search of the village Kenkiyak Special Forces "Sunkar" and "Berkut" stumbled upon a criminal group and a shootout ensued. That night, 10 criminals and 2 policemen were killed.

15. The last terrorist attack of this year happened in Almaty. 27-year-old previously convicted resident of Kyzylorda attacked a policeman in the Department of Internal Affairs of the Almaly district, seized his machine. Then he killed two guards who pursued him. After the shooting, the suspect was arrested. A red level of terrorist danger was introduced. On this occasion, the Head of State convened an operative meeting of the Security Council and the event was declared a "terrorist act".

16. Recently, the policemen from East Kazakhstan recalled their colleagues who died while performing their duties. During the independence of Kazakhstan, 37 employees of the regional Department of Internal Affairs were killed. Of these, 11 - were killed by the death of the brave. A monument is erected; their names are carved into stone.

18. The Head of State highly appreciated the heroism of the policemen who resisted terrorists in Almaty and Aktobe. By the decree of the President, the state award was awarded to: the "Aibyn" Order of the second degree - 5 employees (four of them posthumously), the "Aybin" Order of the second degree - 10 employees (six of them posthumously), the medal "For Bravery" - 9 employees, the medal "For Combat Merit" - 2 fighters of the National Guard. Serik Abildayev, Timur Begasylov, Ayan Galiyev, Zhalgas Keldybayev, Bauyrzhan Nurmukhanbetov, Meirambek Rakhmatullayev and Maksat Salimbayev awarded posthumously.

This was a short review. In one article it is impossible to accommodate such a list separately for each region. Now each regional department of the Interior in different ways holds Days of memory of heroically lost colleagues. In general, a special "Day of Remembrance" has not been approved in the country. Therefore, the proposal of the public association "International Association of Police" in Kazakhstan seems appropriate. Congratulations to the employees of law enforcement bodies, and we wish that your ranks are not reduced!