Home News Houses of merchants in Uralsk or EXPO in Chicago

Houses of merchants in Uralsk or EXPO in Chicago 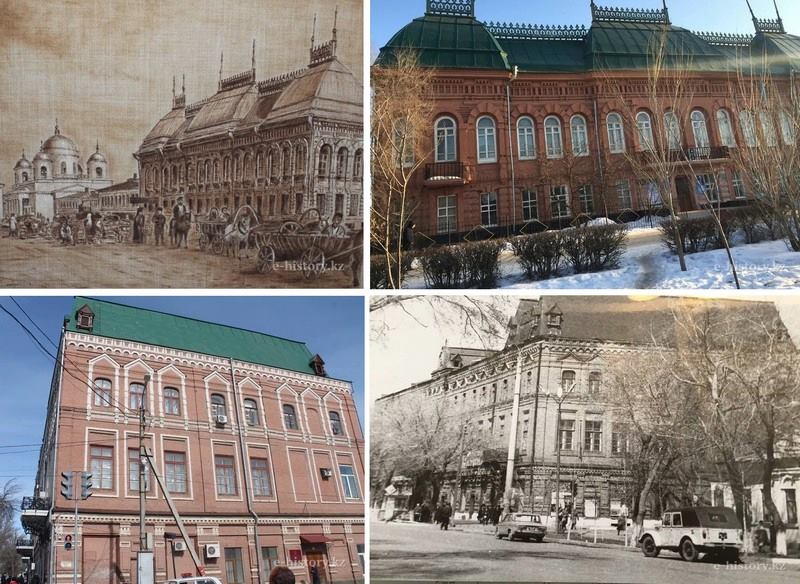 "House of Vanyushins" and "House of Karevs" are unique architectural monuments of the XIX-XX century. All known buildings for more than 100 years are the cultural center of Uralsk

The “National Digital History” Portal starts a special project called "Historical buildings of the city of Uralsk". During the project, we strive to acquaint the readers with the ancient historical buildings of Uralsk, which is rich in historical, cultural and architectural monuments. Clearly, many will be interested in historical information about buildings that are considered to be witnesses of the past, where the secrets of history and the features of their construction are hidden.

So, we begin to acquaint you with the projects of a surprising century that aroused interest among tourists and foreign guests, a treasure house of architecture of the XIX-XX centuries "Vanyushins’ House" and "Karevs’ House". All known buildings for more than 100 years are one of the cultural centers of Uralsk. 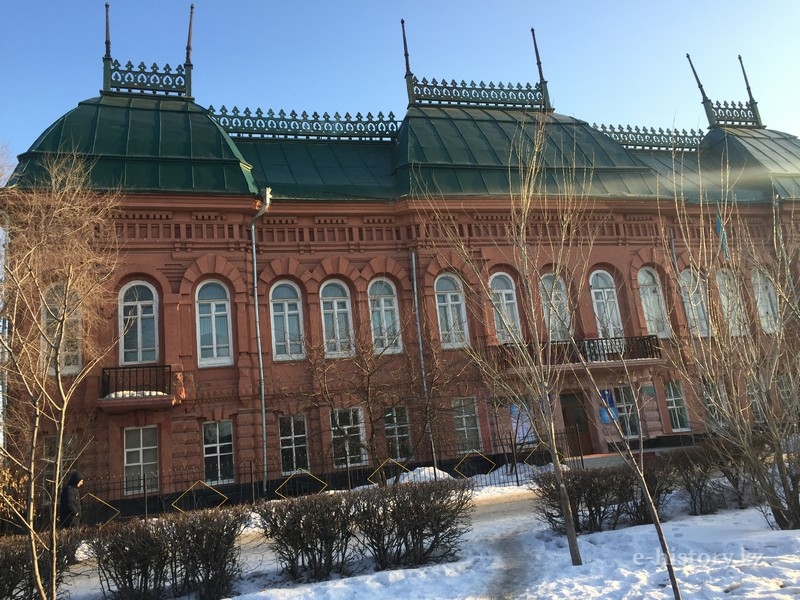 The Vanyushins' House or the high-rise building, which is a Kazakhstani architectural monument of the 19th century, received the award at the EXPO in Chicago - "Vanyushins’ House". In this house, built around the 1880s by the merchants and brothers Vanyushins, there was a commercial club and shopping places. This building, consisting of three floors, has a brick cellar. The roof is made of metal in the form of a dome. The eastern and northern sides of the house have artwork in the spirit of that time. The back of the house is lined with smooth masonry. It has a tent roof with characteristic wooden scallops in the oriental manner. This is the most original building of the city of Uralsk, built in the national style of eastern architecture of the second half of the XIX century.

House of Vanyushins is built by imitating the architectural style of the old palace (XVII century), located on the territory of the Moscow Kremlin. At construction the factory brick of local Ural manufacture was used. The author of the project is unknown. Merchants Vanyushins leased this family house to the commercial club of private households, and then sold to the merchants. 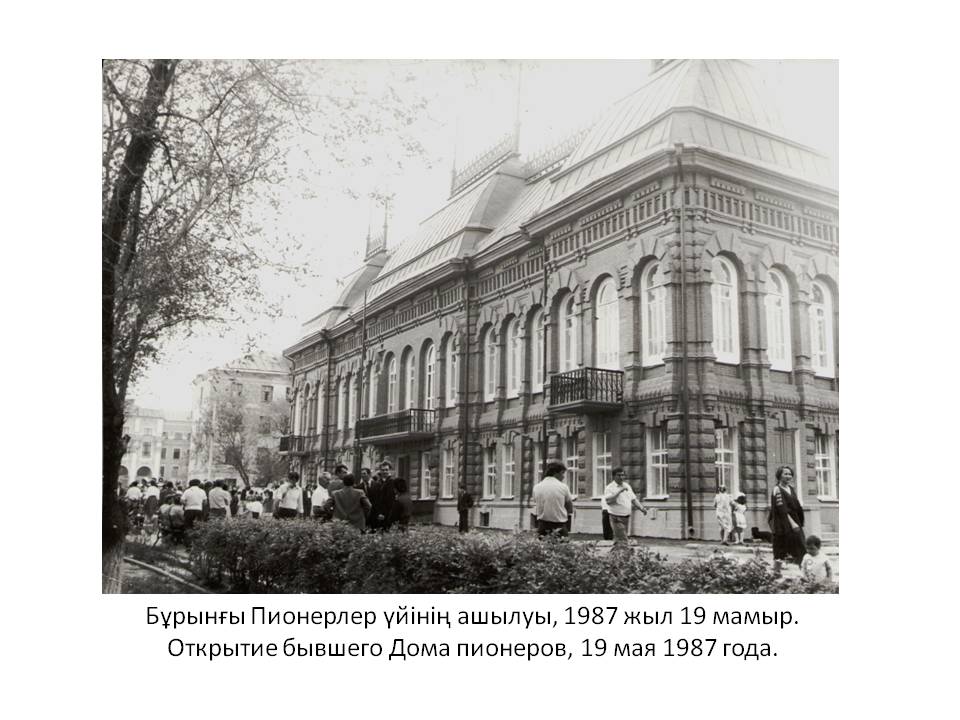 In 1872 the Northern Insurance Company of St. Petersburg took the Vanyushins’ House under its guardianship. The first mistress of the building was famous for the whole region of winemaking skill A. Vanyushina. Later this house became a commercial (merchant) club, where they rested, played bowling alley, Ural, Buzuluk and Samara merchants.

Until 1917 in the "House of Vanyushins", the first board of the region worked. Later, the building housed the Provincial Food Committee, an agricultural technical school. During the Great Patriotic War, the Odessa Military Technical School was located. After the Great Patriotic War there was an agricultural technical school here. 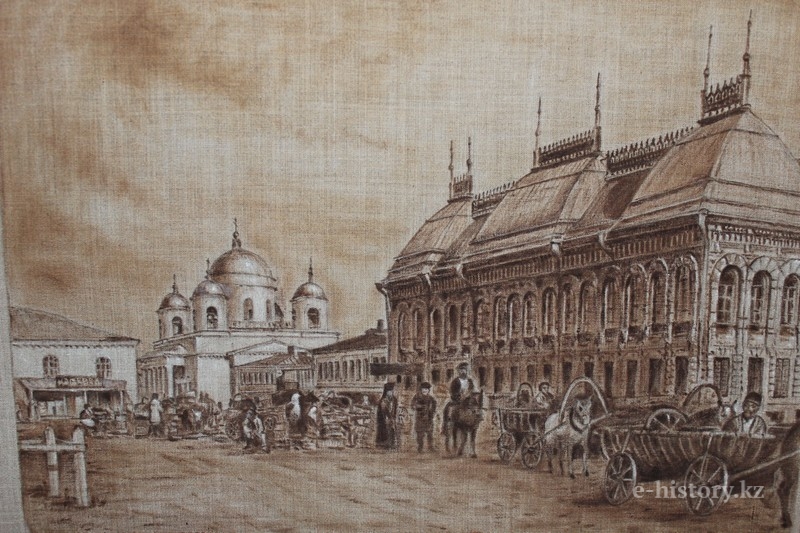 In October 1984, the building of the agricultural technical school was transferred to the Palace of Pioneers. Currently in this beautiful building is the Kazakh Secondary School No. 38. A memorial monument was erected with the inscription: "People's writer of Kazakhstan Zhuban Moldagaliyev studied in this building in 1937-1940". The building is under state protection as a monument of history and architecture.

The elder from the Vanyushins brothers worked for many years as chairman of the Ural Society of Forest Lovers and did a lot to break down parks and landscaping the streets of Uralsk. And the younger brother was the owner of the 1st ratification plant. The table wine produced by his factory was awarded a medal for the excellent taste at the World Exhibition in Chicago, USA in 1893. It is no exaggeration to say that, in the history of the Kazakhs, they were the first to visit the EXPO exhibition.

House of Karevs - wealth and honor of the Ural merchants

In 1900 at the intersection of Bolshaya Mikhailovskaya and Mostovaya streets in the city of Uralsk a huge building was built. It was the "House of Karevs" named after the famous to the local Ural district merchant Alexander Karev. According to local residents, this monument for many years was the largest, and the tallest building in Uralsk. 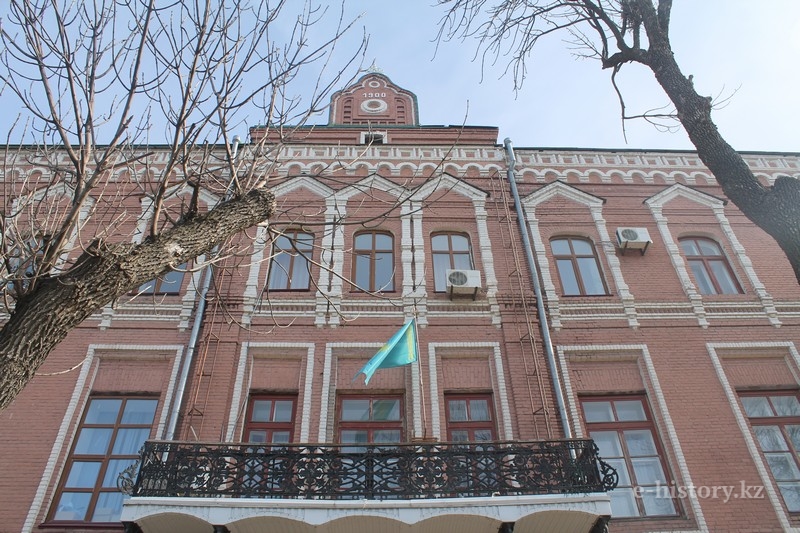 To this day, the architecture of the building, narrating about the history of its era, attracts the views of tourists and visitors of the city. If you walk along the famous Dostyk Street, on the corner of Karev Street you will see a three-story, fringed roof with a high tower at the top "Karevs’ House". Visitors and tourists will have no difficulty in finding this house, because more than a hundred years the building bears the name of the merchant Karev (owners), nicknamed by the townspeople "Karevs’ House". The big house of Karevs shows the wealth and power of the Ural merchant class at the turn of the 19th and 20th centuries.

The construction of this house was started by merchant millionaire Alexander Karev. According to historical data during the inspection of construction works, the owner died, falling from the stairs. The construction was completed by his spouse D.F. Kareva. She was an energetic person, but in 1919 she became ill with typhus and died in the village of Serebryakovo. The building stands out among the old buildings of the city for its grandeur and size, it occupies almost a whole block, three unusually high floors and as if another floor a rampant roof. 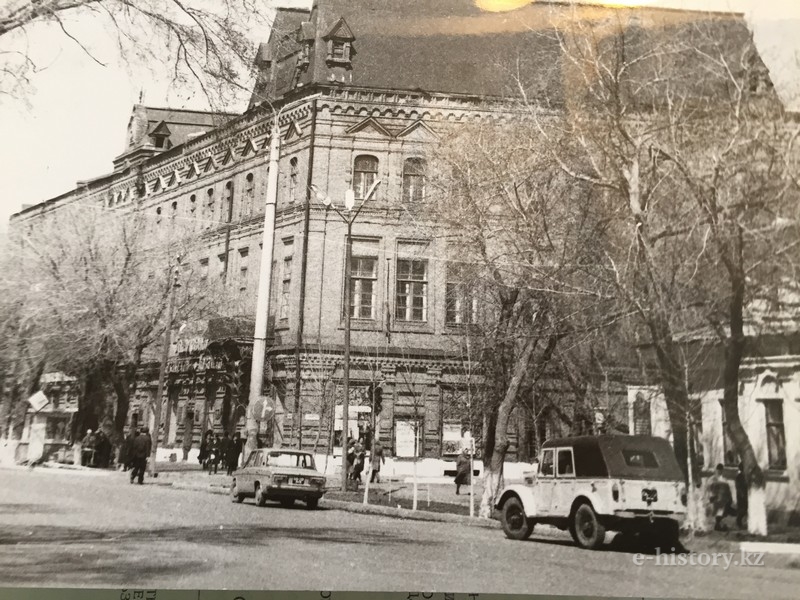 This is the only building in Uralsk built not according to Russian brick and stone masonry. The facade of the building is laid out with a patterned brick without plaster. The floor division is made by the edge of inserted floor; the vertical division is framed by pilasters. The frames of the windows of the second floor are made of bricks, and the third floor is made of frames, curtains, jambs. Lacy balconies on intricate cast iron brackets attract the eye. The building is crowned by a converted arched edge. In general, the Karevs family did not live in this house; it was rented out, the hotel. 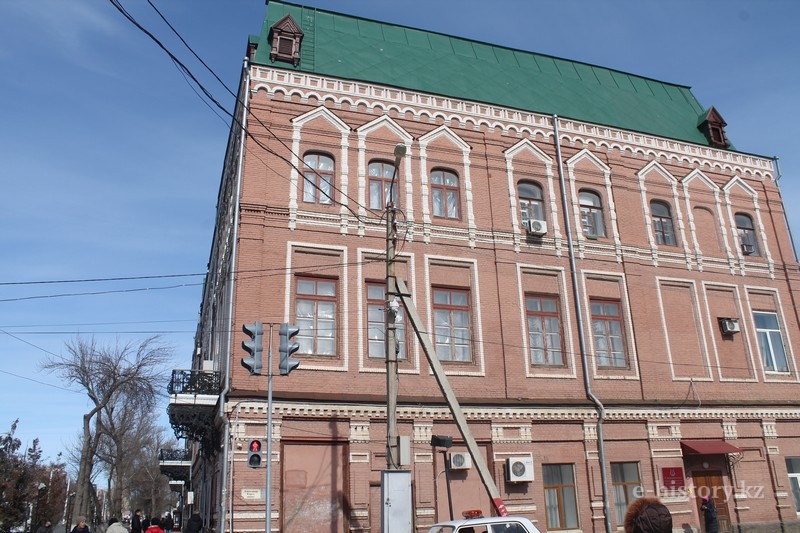 Before painting the house in 2000 on its northern side there was inscription black paint "Numbers". Yes, initially there were rooms for guests. On the second floor there was an officer's meeting with its library, opened as far back as 1871 (converted from the army in 1909) and the third floor was used as hotel rooms. Later the second floor was occupied by a commercial club.

In 1908-1909 in the hall of the second floor worked "Electro-Bioscope Pate" and "Paris Cinema". In 1914, on the top floor, there was a male gymnasium, opened in 1912. In 1919, during the defense of the city, volunteer and workers' squads were formed in the building. Here Lenin's telegram was read out, received in harsh days. The telegram was addressed to the defenders of Uralsk. 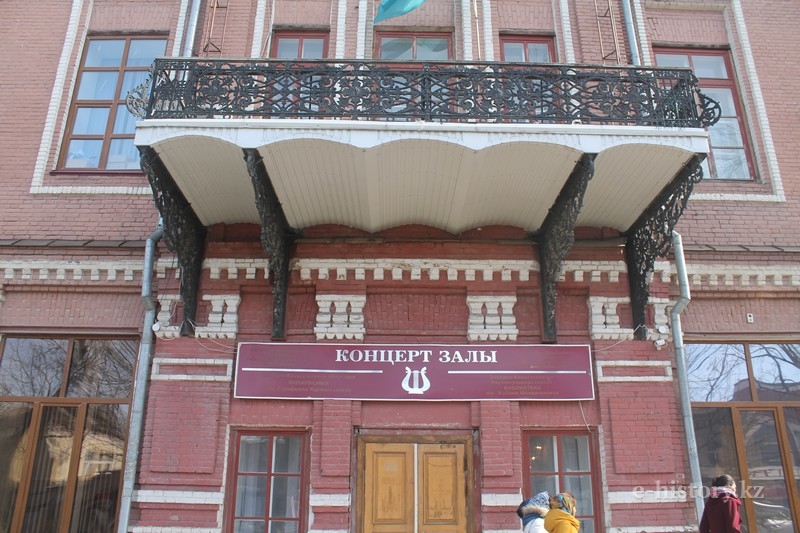 In 1919, on December 14, the second floor of the House of Karevs was given to the Karl Marx Labor Palace for use. After the death in 1934 of the Secretary of the Central Committee and the Leningrad Regional Committee parties, S.M. Kirov in the country began activities to perpetuate his name. At this time House of Karevs changed its name. Now it began to be called the House of Kirov. The adjacent Mostovaya Street was renamed into Kirov Street. Although Kirov has never been here, and no one has ever heard of him, the State Military Garden was also given the name of Kirov. 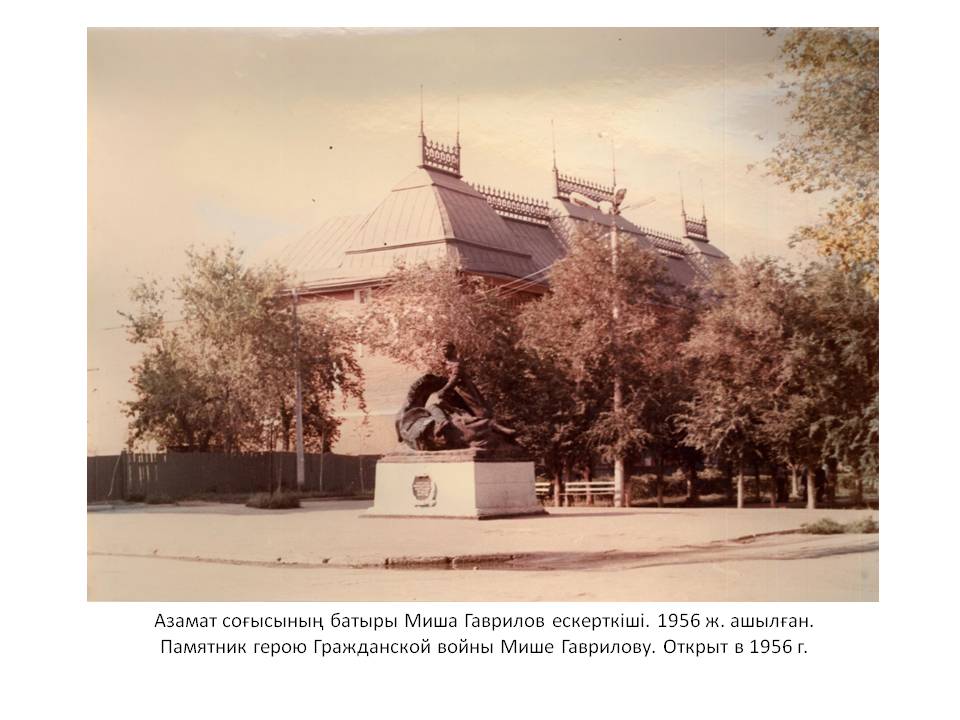 After the Civil War and until the 50's inclusive, the third floor remained a hotel. Many famous writers who arrived in Uralsk stayed here as guests: S.Seifullin, P.Vershigora, N.Rylenkov, E.Permitin, T.Zharokov, G.Musrepov, H.Esenjanov, A.Aldan-Semenov and others. During the Soviet era, many institutions were located here. Among them are regional newspapers "Oral oniri" and "Cisurals". During the Great Patriotic War there was a large military hospital for soldiers of the Soviet Red Army, and in 1944 the regional library moved here. Today in the building from the first floor, on the second and third floors the regional philharmonic society named after G.Kurmangaliyev and the regional scientific universal library are located. The building, which is a historical monument of the XIX century, is under state protection.

The article was prepared in conjunction with the State Archive of the West Kazakhstan region.

Author: Altynbek Khumarzakh
Use of materials for publication, commercial use, or distribution requires written or oral permission from the Board of Editors or the author. Hyperlink to Qazaqstan tarihy portal is necessary. All rights reserved by the Law RK “On author’s rights and related rights”. To request authorization email to mail@e-history.kz or call to (7172) 79 82 06 (ext.111)
Қазақша Русский English
MOST READ
Week Month Year
“Diwan Lughat al-Turk” or “The Compendium of the Turkic languages” of Mahmoud Kashgari Raymbek batyr is a determined defender of Qazaq interests Ayteke bi is a law expert of the Great Steppe Qazaq poet Kuandyk Shangitbaev: is he equal to Alexander Pushkin? History in Symbols Love and Marriage Story of Sabit and Maryam Gabit Musrepov is a man, who was born under a lucky star Kanysh Satpayev’s faithful Muse History of Wusun State and Yuezhi tribe Images of Women in the Works of Qazaq Poets-Zhyrau Nurgissa Tlendiyev. Principal Conductor of Kazakhstan President of Kazakhstan took part in the opening ceremony of celebrations dedicated to the 175th anniversary of Abai Kunanbayuly

Materials on theme
Abylai the King: A Warrior, Diplomat and Patriot
The Alash party: the lessons for generations to come
Today is Kazakhstan Police Day
Nazarbayev’s way was not silky