HISTORY OF NATIONAL ACADEMY OF SCIENCES 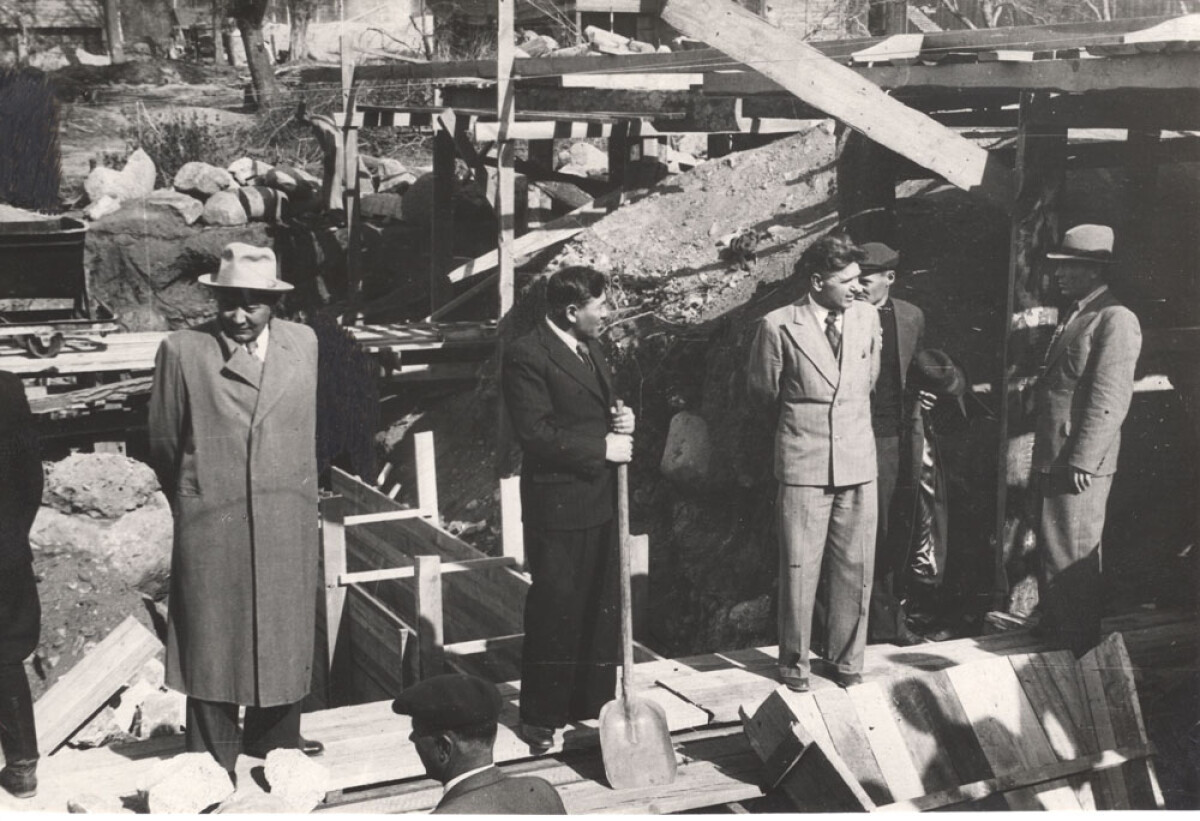 History of the organization of the Republican Academy dates back to March 8, 1932, when the Presidium of the Academy of Sciences of the Soviet Union, considered the submission of the Commission on the bases and branches, makes a decision on the formation of the USSR Academy of Sciences of Kazakhstan base, consisting of two sectors: Zoological and Botanical. Chairman of the database was appointed A.N. Samoylovich, members of the Presidium were B.A. Keller, S.D. Asfendiyarov, and M.N. Tulepov.

In November 1938, the base was transformed into the Kazakh branch of the USSR Academy of Sciences - the largest institution in the country, in which worked about 100 researchers, 14 of them had a PhD degree and three Dr. Its activity took place at a difficult time for the country - during the Great Patriotic War. Kazakhstan being rich in natural resources was given the role in ensuring the front with the necessary means. For the victorious end of the Great Patriotic War in Kazakhstan had all necessary conditions for the organization of the Republican Academy of Sciences.

Creation of the Academy of Sciences of Kazakhstan was the final result of preliminary work carried out by its first president and initiator of the creation – K.I. Satpayev. Scientists of Moscow, Leningrad and other cities in the country, temporarily evacuated to Kazakhstan helped. Together with them were taken measures for preparation of highly qualified scientists – Doctor of science, especially among the Kazakhs; the basic institutions were determined, postgraduate studies in scientific fields was organized. A group of young scientists of the Kazakhs was sent to the doctorate of the Academy of Sciences of the USSR. Specialists of plants were involved in postgraduate studies.

The decision of the CPC and the CC CP (b) of Kazakhstan "On the preparations for the organization of the Kazakh SSR Academy of Sciences" as of August 18, 1944 stated that "since the acceleration of the development of industry, agriculture and culture of the republic were associated primarily with the rise of science and a rapid rate of scientific research works, organized and coordinated by a single center of science, Kazakhstan needed the establishment of the Republican Academy of Sciences." The same decree in order to guide the work a government commission was organized, its Chairman was appointed N.D. Undasynov, his deputies were N.A. Skvortsov, Zh. Shayakhmetov, A.P. Zagovelyev and K.I. Satpayev, in total - 18 people. The Commission should develop a framework for academic institutions, consider the states, and prepare a commemorative exhibition of the achievements of Kazakhstan science and solemn scientific session of the Academy.

March 1, 1945 Chairman of the CPC N.D. Undasynov and President of the USSR AS V.L. Komarov wrote: "...The actual center of science in Kazakhstan was the Kazakh branch of the USSR Academy of Sciences, established in 1932 and especially intensively rolled out its research works during World War II. In the research institutes of the Kazakh branch of the USSR Academy of Sciences worked over 40 doctors and professors and more than 100 candidates of sciences and associate professors (389 scientists from Alma-Ata with academic degrees and titles). Achievements of Kazakh SSR in the development of economy and culture allow us to make the idea of the commemoration of this year's 25th anniversary of the organization by the Soviet Kazakhstan Kazakh Academy of Sciences..." 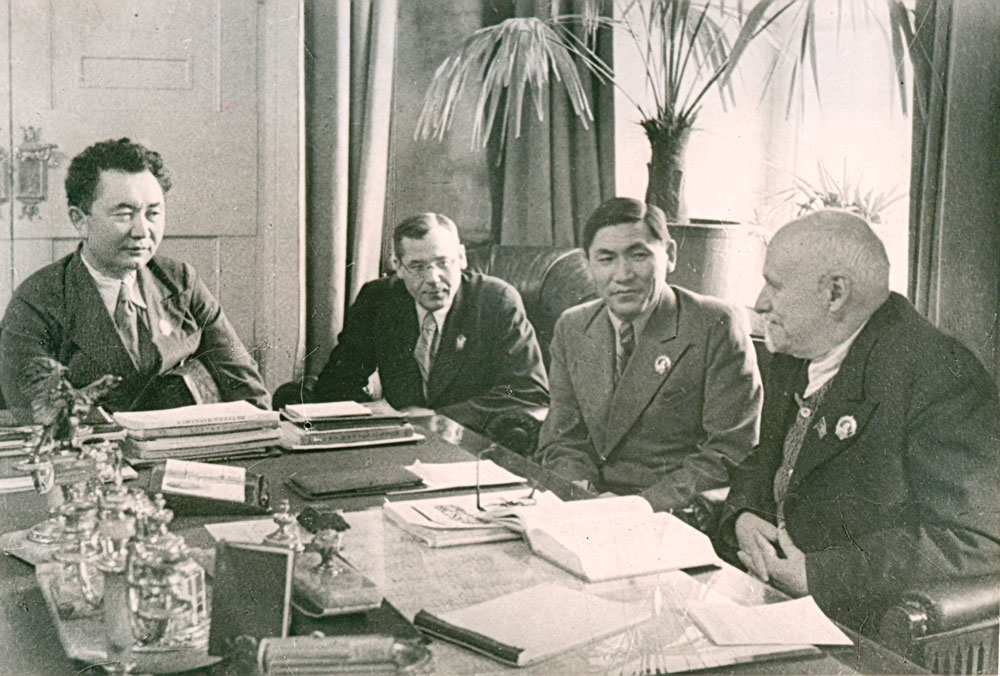 In 2003, in accordance with the Decree of the President of the Republic of Kazakhstan N.A. Nazarbayev the Academy of Sciences was given the status of the Republican public association "National Academy of Sciences of the Republic of Kazakhstan." The Academy is involved in the definition of priority directions of development of the republic science, prepares for submission to the Head of State the annual National Report on Science, promotes scientific advances through the issuance of academic journals and other publications, and participates in the conduct of symposia, exhibitions and competitions on the state prize in the field of science and technology , assists in the development of international scientific cooperation and innovation, is involved in the conduct of scientific expertise on fundamental and applied researches.

On the main photo: during the laying of the foundation of the Academy of Sciences.

From left to right: K.I. Satpayev, N.D. Undasynov, and an architect N.A. Prostakov

Use of materials for publication, commercial use, or distribution requires written or oral permission from the Board of Editors or the author. Hyperlink to Qazaqstan tarihy portal is necessary. All rights reserved by the Law RK “On author’s rights and related rights”. To request authorization email to or call to 8 (7172) 57 14 08 (in - 1164)
Қазақша Русский English
THE MOST WIDELY READ
Month Year
Top 10 national dishes you should try in Kazakhstan Master class was organized for the workers of the National Museum of the RK at Botay settlement Jewelry art Women that left trace in the history of Kazakhstan Kazakh yurt – a house without corners Kazakh wedding traditions: uryn kelu Cultural walk: Museum of Turkic Academy The great Kazakh scientist-educator, historian, ethnographer Shokan Ualikhanov was born The story of one photo. Nikolay Panin Cultural walk: in the footsteps of the Hero of the Soviet Union Timofey Pozolotin Address of the President of the Republic of Kazakhstan. Expert opinion – B. Ayagan They proved that Kazakh Art was important for them
Philosophy of the Emblem President of Kazakhstan took part in the opening ceremony of celebrations dedicated to the 175th anniversary of Abai Kunanbayuly Abdurakhman Aitiyev and his struggle Nurmukhan Zhanturin. Actor who played himself Ydyrys Mustambayev. Defender of Abai and Magzhan Online documentaries Kassym-Jomart Tokayev sent a telegram to UN Secretary General António Guterres History of pandemic in Central Asia THE GREAT SON OF THE GREAT STEPPE What was the composition of the country’s Supreme Soviet of the XII Congress Armenians and their kinship with the Kazakh people Nurtas Ondasynov. Kunayev’s Chief
Polls
Materials on the topic
Living for the Kyrgyz account
Heroic mothers of the great steppe
Stolypin about the worries and hopes of immigrants to the Kazakh steppes
A tireless explorer of the Kazakh land