Home News Archival documents about the fate of Zhumabek Smailov

Archival documents about the fate of Zhumabek Smailov 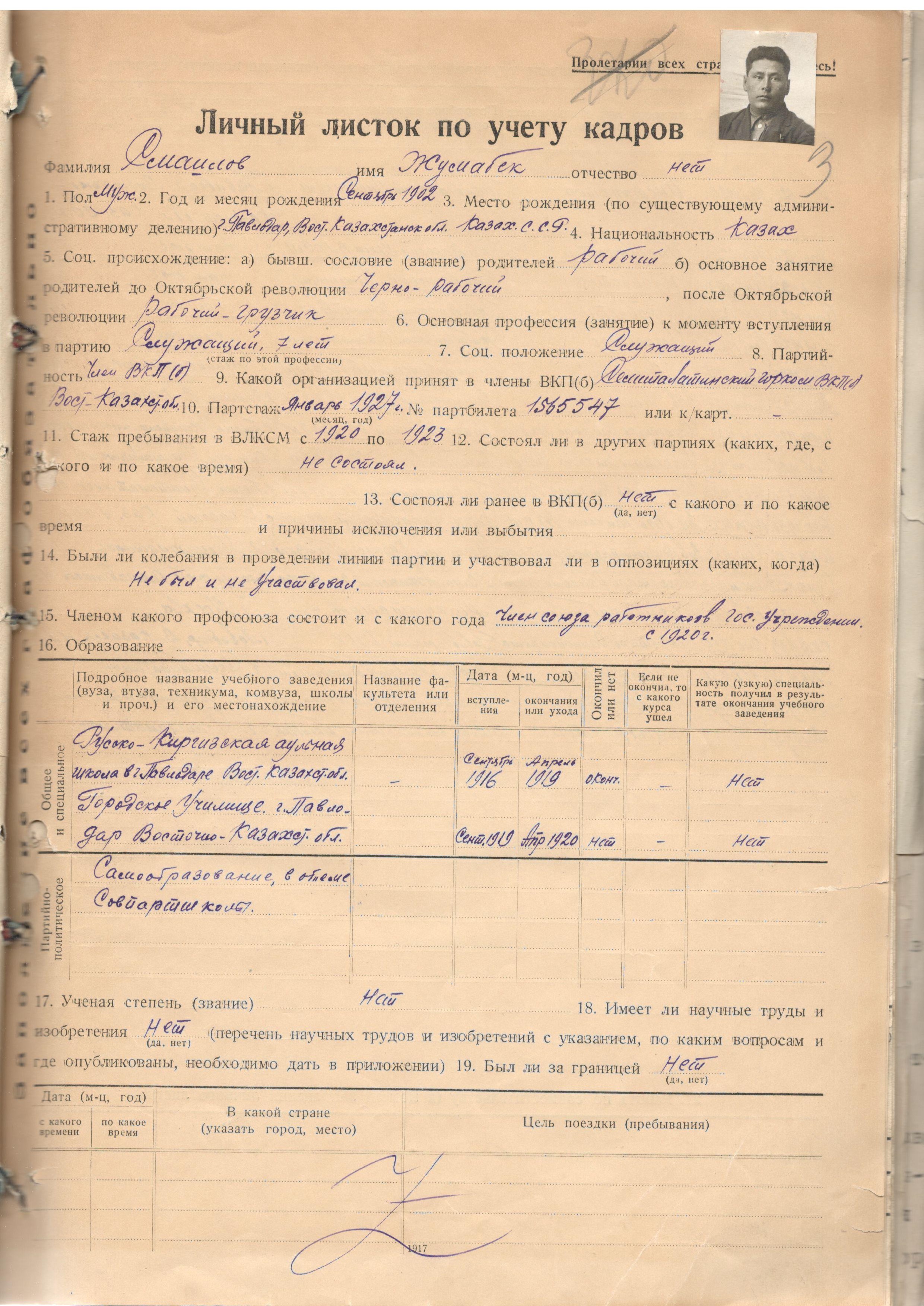 National Digital History continues to publish materials about the victims of Stalinist repression. Smailov Zhumabek, according to the Archive of the President RK, was wrongfully convicted in 1937

The Archive of the President of the Republic of Kazakhstan is the main keeper of the political history of modern times in Kazakhstan. Unique archival collections reveal the history of the Soviet period in Kazakhstan through the policy documents of higher Party organs, circulars, information, materials, correspondence. Here are stored not less valuable documents relating to personnel category. Personal leaflets with applications and characteristics, autobiographies, extracts of decisions of district, regional and national offices and photos, which are now considered to be an invaluable historical source not only for scientists and researchers, but also for those who is seeking information about their relatives.

In May 2016 President of Kazakhstan Archive presented the first part of a documentary handbook "Nomenclature cadres of Soviet Kazakhstan". Guide is posted at the Archive web-site, contains biographies of the leaders of the party, Komsomol, administrative, financial, trade union bodies, education and health, as well as the commissioners of the military commissariat of Kazakhstan. The first part of the collection covers 1919-1936 years. The total number of biographies is 5010 of 2700 personalities. Much of the information in the first part of the handbook is formed according to the documents of the fund number 141 of the Kazakh Regional Committee of the CPSU (b). 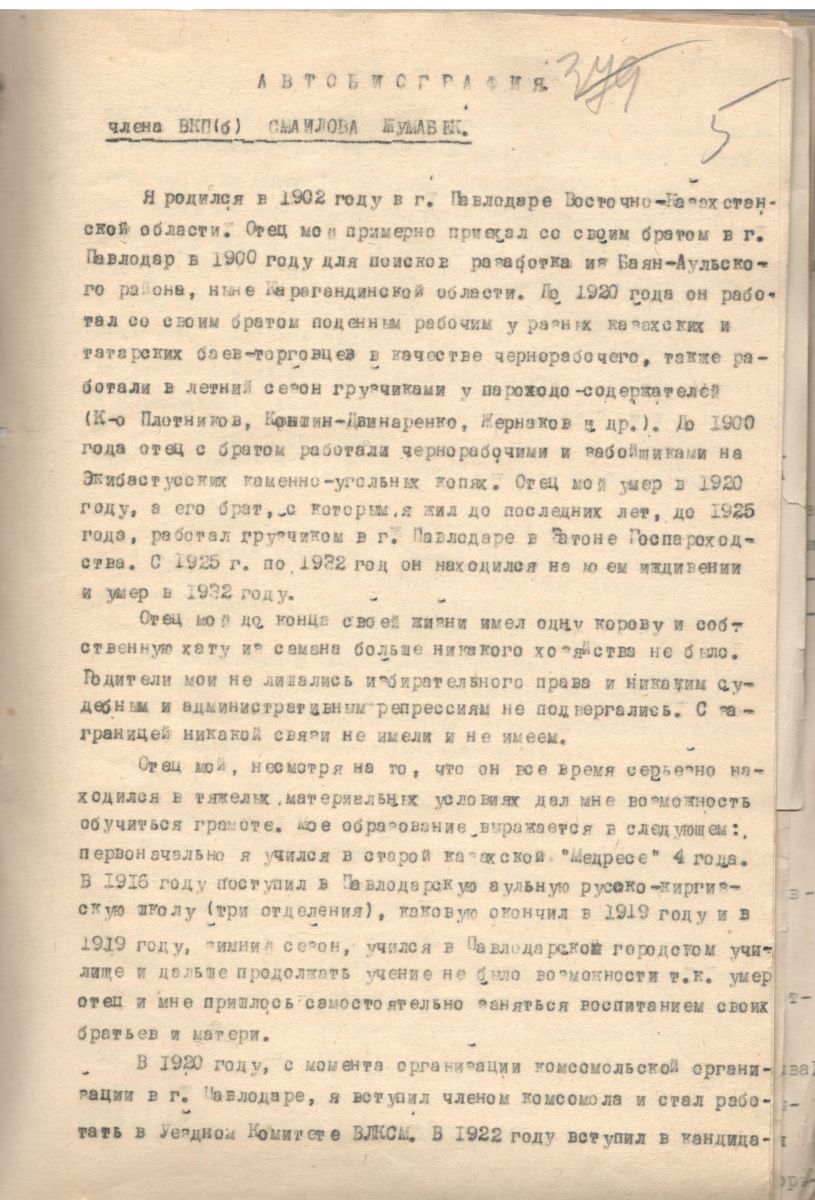 In the accounting sector, the Department of the leading party bodies collected personal sheets of personnel records and their annexes. Thus, in the case number 13522 available documents of Smailov Zhumabek are dated April 1937.

Smailov Zhumabek was born in September 1902 in Pavlodar, a member of the CPSU (b) since 1927, member of the union of workers of public institutions since 1920.

His working career began in 1920 in Pavlodar in Komsomol bodies, then the county police, and the finance department.

Since November 1924, he worked at Ekibastuz Sovpartschool, and in September 1925 moved to Semipalatinsk, where he was assigned as the appointee in the various party organs of Semipalatinsk region.

In his autobiography Zhumabek Smailov wrote in detail, where, when, and from what party organ he received the appointment.

In September 1932 by the Decree of Kazkraykom CPSU (b) he was appointed Secretary to Zhana-Arka district committee of the party in Karaganda region.

In July 1933, he was removed from his post and expelled from the party "for the assumption of the economic collapse of the region, for failing to suspend decampment from the area, the failure to take decisive measures to organize food aid for all population". Party functionaries tried to shift the blame for the "excesses" during the collectivization on local leaders. 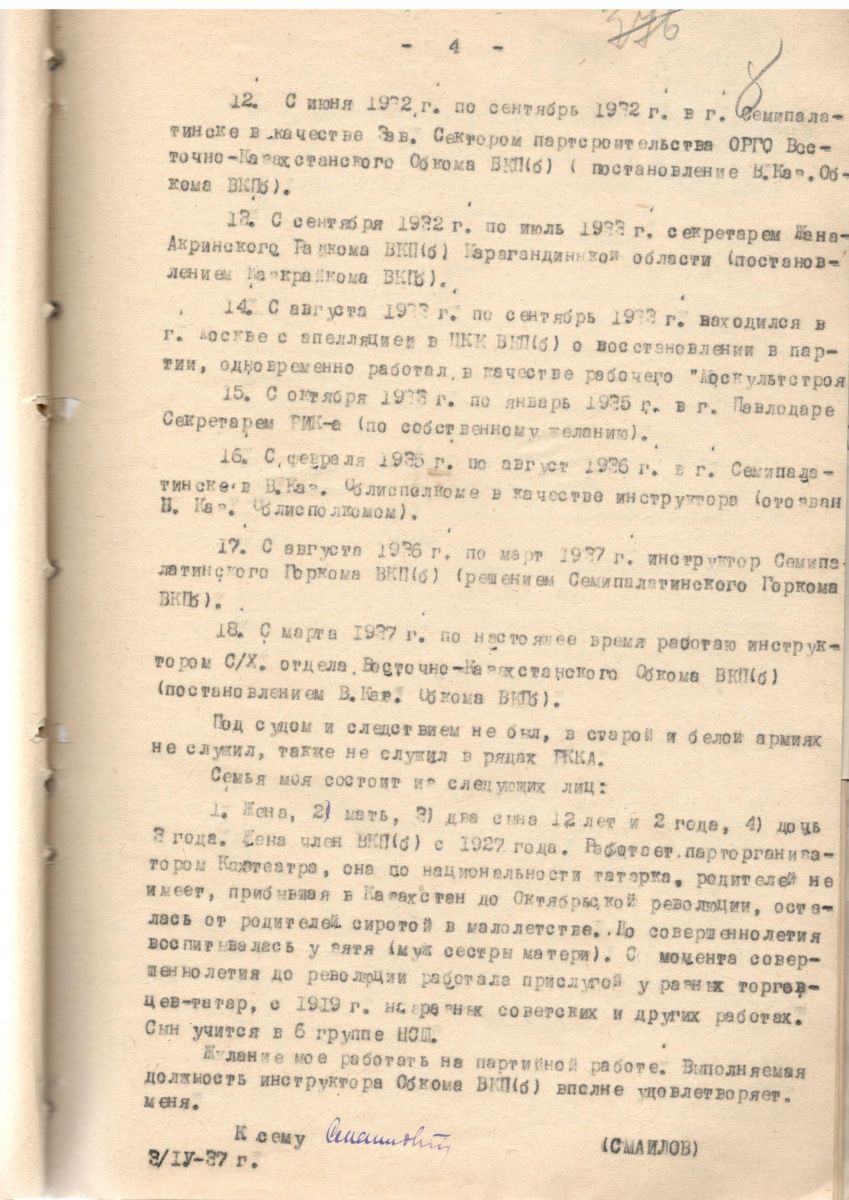 To restore fairness Zhumabek Smailov left for Moscow, haunting thresholds of allied party leaders, wrote an appeal and won his case reviewed, and the recovery in the party. While being in Moscow, he got a job as a laborer in Moskultstroy, where he worked a couple of months in the autumn of 1933.

About his wife Zhumabek Smailov wrote, without mentioning her name: “The wife of a member of the CPSU (b) since 1927. Works as Kaztheatre Party Organizer, she is an ethnic Tatar, no parents, she arrived in Kazakhstan before the October Revolution, she lost her parents in early childhood. Until the age of majority she was brought up by brother-in-law (husband of mother's sister). Since the age of majority before the revolution she worked as servant at different merchants, Tatars, since 1919 at various works”.

Six months later, in October 1937 Zhumabek Smailov was arrested. This information is available on the service "Memorial" website of the Ministry of Internal Affairs of the Republic of Kazakhstan. «Memorial» - is a database with functionality to search information about repressed persons and rehabilitation of victims of mass political repressions. The "Memorial" included a summary of the criminal cases to persons who have been convicted and sentenced to various terms of punishment according to the article 58 and 59 of the Criminal Code of the RSFSR and the corresponding articles of the Criminal Code of the other Soviet republics (for treason and counter-revolutionary activities during the time of existence of the Soviet Union), located on the archival storage in the Interior Ministry and its territorial divisions. Now the database contains information about 109 186 repressed persons. From the information of "Memorial": before arrest Zhumabek Smailov lived in Semipalatinsk, worked as an instructor to agricultural Regional Party Committee.

In February 1939, the criminal case was dismissed due to lack of evidence. Perhaps the experience acquired in 1933, when he went to appeal to Moscow, helped to avoid the death penalty.

Only in 1990 by the decision of the Prosecutor's Office of Semipalatinsk region of KazSSR Zhumabek Smailov would be fully rehabilitated due to lack of evidence. 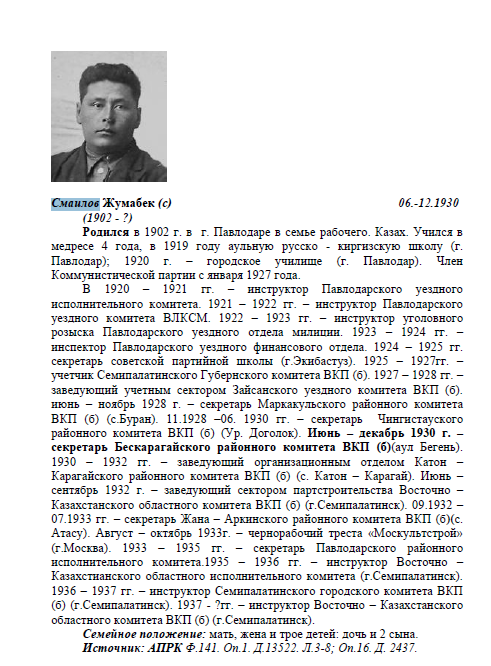 The following information about the fate of Zhumabek Smailov is stored on site «obd-memorial.ru». This electronic archive, which contains more than 11 million documents of the deceased or missing during the Great Patriotic War (1941-1945): the lists of irrecoverable losses in the fighting, information about graves and reburial, letters on search in the postwar period and other archival documents. The Red Army man of 340th Infantry Division Smailov Zhumabek died in battle in Voronezh region on July 22, 1942.

From the materials of «obd-memorial.ru» web-site

In the nominal list of irrecoverable losses Zh. Smailov mentions as political officer, here there is information about his wife - Valitova Malinur [Mashnur] and her residence address: Semipalatinsk, Gvardeyskaya Street, building 89.

With the help of site «obd-memorial.ru», the search service "Memorial" of the Ministry of internal Affairs of the Republic of Kazakhstan, the handbook "Nomenclature cadres of Soviet Kazakhstan» of the Archive of the President of the Republic of Kazakhstan was found information about Zhumabek Smailov, in the biography of whom a difficult and arduous life of generation in the pre-war and the war years is reflected.