Home News History in 5 minutes We remember you 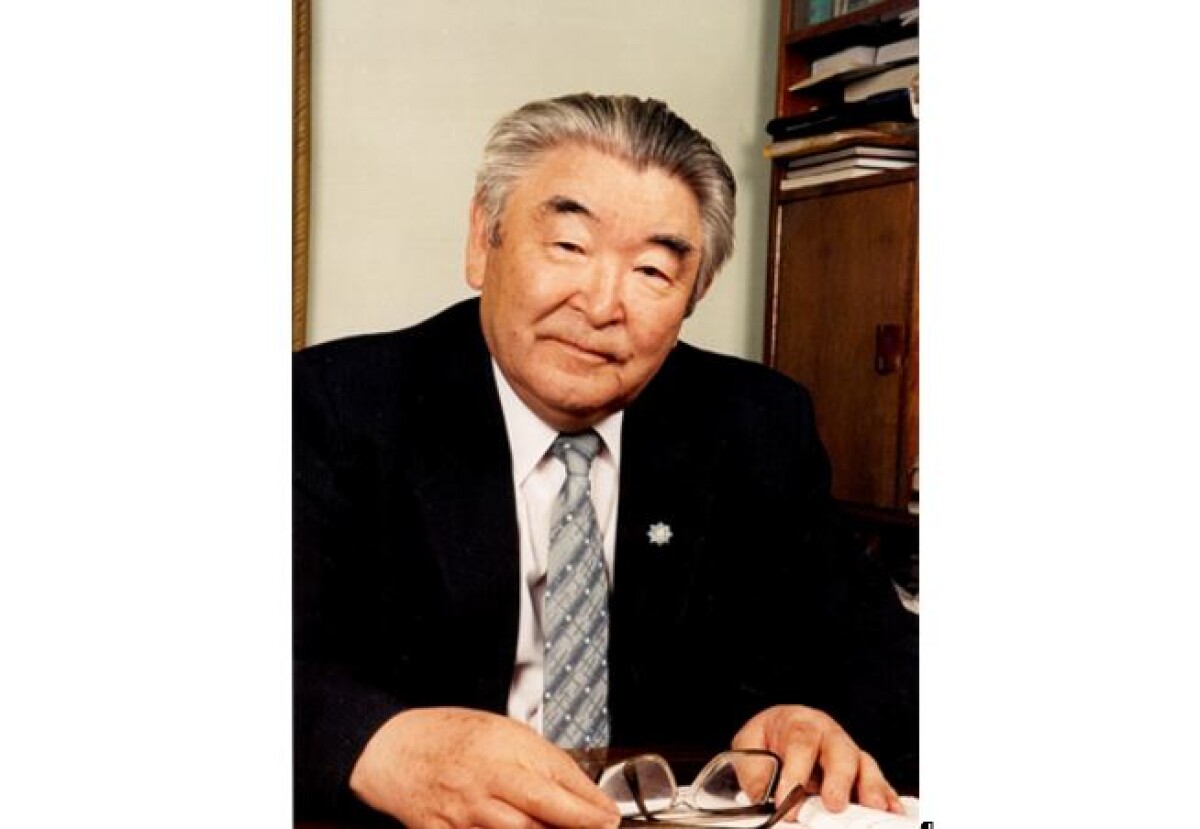 In late 2016 in the country occurred the events dedicated to the 85th anniversary of famous scientist-historian, academician of the Academy of Sciences of RK Manash Kozybayev (16.11.1931 – 31.01.02)

Kostanay land for centuries absorbed all the happened on it and gave birth to its splendid sons. In different periods there were Shokan Ualikhanov, Ibray Altunsarin, Akhmet Baitursynov, Ilyas Omarov.

Into the number of great personalities enter Manash Kabashevich Kozybayev. At the historic faculty of Kostanay State University named after A.Baitursynov they often remember the arrival of Manash Kabashevich in Kostanay in June 2001. Students and instructors-historians knew that this year is the jubilee for the academician. And with the help of the faculty literally of two weeks was prepared the exposition about the life path of the scientist.

Students waited for Manash Kabashevich and supposed that he would visit the native aul, meet with aksakals, remember the youth, but also would visit them. But Manash Kabahsevich, as usual, behaved not ordinarily. The meeting on the native land did not become just a toy. Academician came not alone, and brought his colleagues, friends – bright activists of science, literature. 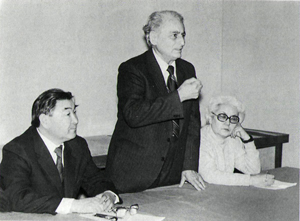 The whole constellation of bright lawyers, economists, writers, historians. Among them is the bright star for you, Kostanay residents is Manash-aga. Reports of the scientists who presented the speech found their elicited response in hearts and minds among students, representatives of intelligentsia.

Finals of political, economic development of the Republic of Kazakhstan for 10 years of Independence, new methodological approaches in the study of national history and restoration of original and true history of Kazakh people, evolution of the Constitution of the country, perspectives of the development of the republic for future – problems, rather communicative, sensitive in those days.

Each evening Kostanay people could see them and hear from the TV screens. Thus, owing to Manash Kabashevich their ideas, theories became close to us, more understandable.

There is such impression that Manash-aga wanted to show to Kostanay people who his colleagues were, in what sphere  the truth is crystallized, who was at the head of science of republic, that is, in a friendly way, to make boast of their circle of communication (may God give to each one such surroundings), and them to show their native land, compatriots.

Speaking from a rostrum at university, Manash Kabashevich definitely remembered that he started as young teacher to deal with research work in Kostanay Pedagogical Institute. The starting point of this activity is connected with the local history. Remembering Manash Kabashevich he had always wanted to search for the sources of the history of native land, explain the names of the land. In those years there were many disputes about the origin of the name of our people. From all the legends and fables, giving credit for their romantic beginning, Manash Kabashevich from three trustworthy versions preferred and justified the next Kos (kosh) – the stand, place of the nomad camp, Tanay of Kypshak tribe. Archeological data confirm that the nearest settlement of nomads of the epoch of bronze was situated near the river of Tobol (settlement Zarechnyi).

In his 25 years the future scientist was sensitive to the history of city and with responsibility declared about his discovery. Now this version is considered the only right one, however, not many know that the authorship is behind him. But Manash Kabashevich was young and generous at that time. He would do a lot for his life of discoveries in history. 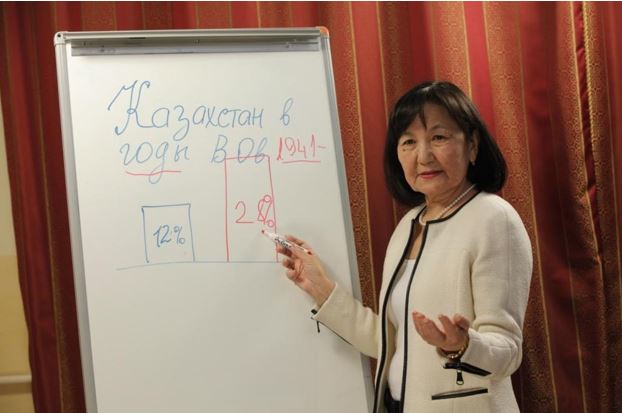 We tried to collect the list of his first editions on the research of Kostanay oblast and revealed that the first brochure “Party of Bolsheviks in the fight for the formation of the Soviet power in Kustanay” was issued in 1956.

Later, “Alibi Dzhangildin – the first Commissar of Steppe land” (1957), “From the history of our oblast”, “Pages of the past”, “Past of our oblast”, “Certain issues of the history of October revolution and civil war in Kustanay and Kustanay oblast”, “First steps of Kustanay Comsomols”. Young teacher M.K.Kozybayev was the founder and editor of the first “Scholarly notes of Kostanay Pedagogical Institute” in 1958. In the funds of Kostanay local history museum is the manuscript of his work “Revolution 1905-1907 yy. in Turgay oblast”. And here is the brochure “Past and present of Kustanay oblast” issued in 1956 with the assistance of the head of lecture bureau of the Department of Culture of Oblast Government P.P.Belonozhko, played the important role in the creation of the family of Kozybayevs.

Owing to the fee for this book they played their wedding. Working in Alma-Ata in the Institute of history of the party, Manash Kabashevich continued to be engaged with the research of the history of native land. It is possible to say that at intervals between the defenses of their dissertations, writing of fundamental works, Manash aga from time to time researched the life and activity of our     Ilyas Omarov, also he is one of those who returned to his descendants the name and wealthy scientific heritage of Akhmet Baitursynov. To the question “What are factors of Your success in scientific work?” Manash Kabashevich among the main ones called the support of family, close people. This page of his biography he told the following way…Leaving again after holidays, young student Manash got acquinted with the wonderful girl from Kostanay named Sara.

It was love of all his life. Hand in hand two wonderful people for more than 40 years lived together. Ilyas and Gulshat were born, the successors of the father’s business. Son at diplomatic work. Gulshat at Doctoral. Certainly, it was a great achievement of Sary-apai. Sara Pshembayevna finished the Physics and Maths Faculty of KazGU with honors and started her work activity in our, at that time pedagogic institute. Her disciples, they are school teachers and teachers of Maths of our university, say about her as about a talented pedagogue and wonderful person.

But, as it is known, the big is seen in distance. It seems that Sara Pshembayevna as the Mathematician considered that uneasy, but grateful way of the formation of the scientist, who will bring to the achievement of the aim and decided that Maths is firm and history, more than that, national one, can not wait and took the main burden of labor on preservation and family hearth, formation and prosperity of the dynasty of Kozybayevs.

One more small, but important trait. Working over his theme of research in the Archive of National Academy of sciences, young researcher Serikzhan Ismailov met there the invaluable document among other papers.

It was the review of the bright mind of national historic science Ermukhan Bekmakhanov for candidate dissertation of the future academician, “The work is richly documented. With love the author writes about his labor heroism. It should be said that Kozybayev Manash Kabashevich expressed himself as the mature researcher, being able to solve independently great scientific problems. Dissertation responds the risen demands to scientific work” (Fund 23, Inventory I, File 377, List 2).

And E.Bekmakhanov as his contemporaries note was principle and demanding to scientific research. There is no wise, kind, sometimes strict, cheerful, our beloved Manash-aga. Teacher went from us, but left his scientific heritage, gave in will to continue his business.