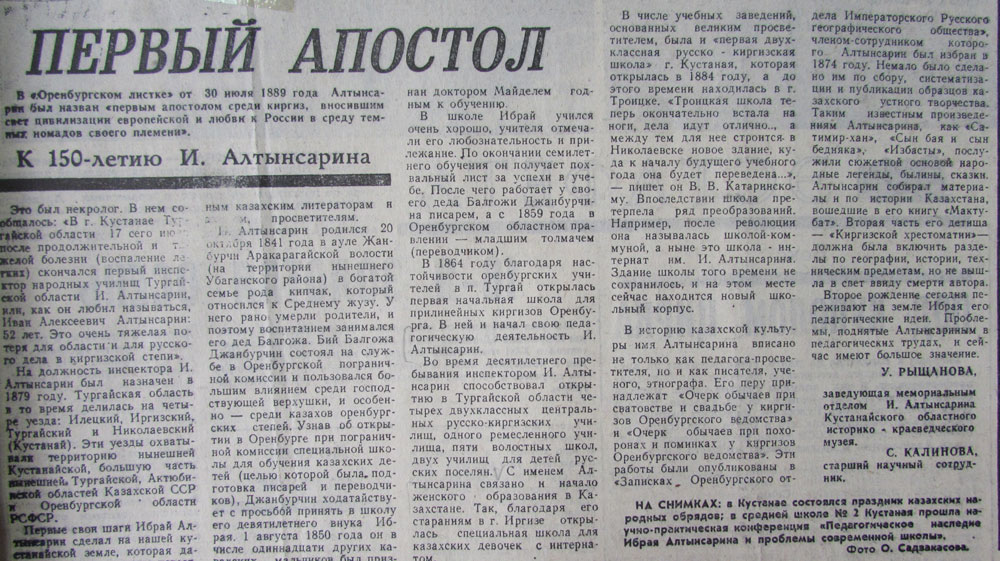 We found an article about the great Kazakh educator I. Altynsarin in the newspaper file "Kazakhstanskaya Pravda" of 1991

Altynsarin was born on October 20, 1841 in Zhanburchi aul of Arakaragay region in a rich family of Kipchak, which referred to the middle zhuz. His parents died early, that’s why his grandfather Balgozha brought him up. Biy Balgozha Dzhanburchin was in the service of Orenburg Boundary Commission, and had a great influence among the ruling elite, and especially among the Kazakhs in Orenburg steppe. Having learned about the opening under Orenburg Boundary Commission a special school for training the Kazakh children (the purpose of which was the preparation of clerks and interpreters), Dzhanburchin made a request to take to the school his nine-year old grandson Ibray. 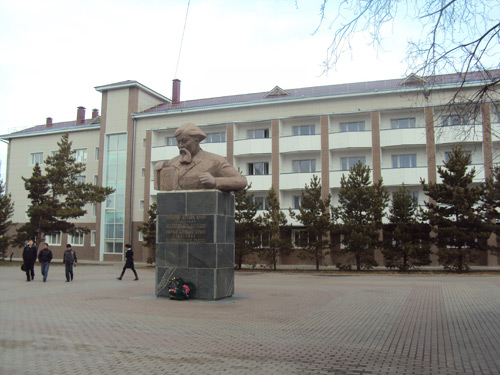 On August 1, 1850, among the eleven other Kazakh boys he was classified by Dr. Meidel as fit for training. At school, Ibray went very well, teachers noted his curiosity and diligence. Before the end of seven years teaching he receives certificate of merit for academic excellence. After that, he works as a clerk with his grandfather Balgozha Dzhanburchin and since 1859 in Orenburg regional government - younger dragoman (translator).

In 1864, thanks to the insistence of Orenburg teachers in Turgay was opened the first elementary school for Kirghizs in Orenburg. I. Altynsarin began his teaching career there. Ibray is known as a writer, scholar, ethnographer. Altynsarin wrote "Essay on customs at marriage proposal and wedding of the Kirghiz in Orenburg" and "Essay on customs at the funeral and memorial service of the Kirghiz in Orenburg". These works were published in "Notes of Orenburg department of the Imperial Russian Geographical Society", a member-employee of which Altynsarin was elected in 1874. 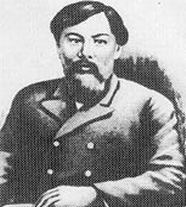 Ibray Altynsarin was appointed to the post of inspector in 1879. Turgay region at the time was divided into four districts: Iletsk, Irgiz, Turgay and Nikolayevsky. During his ten-year tenure as inspector Altynsarin contributed the opening in Turgay region four two-year central Russian-Kirghiz schools, one trade school, five township schools, two schools for children of the Russian settlers.

The name of Altynsarin is associated with the beginning of female education in Kazakhstan. Thus, thanks to his efforts in Irgiz was opened a special boarding school for the Kazakh girls. Among the educational institutions founded by the great educator, was also "the first two-year Russian-Kirghiz school» in Kostanay, which was opened in 1884, and until that time was in Troitsk. "Troitsk school finally got to its feet, everything was going well, and yet the new building in Nicolayevsky was built for it, where to the beginning of the next academic year it would be transformed" - he wrote to V.V. Katarinskiy. Subsequently, the school suffered several changes. For example, after the revolution, it was called the school-commune and then boarding school named after I. Altynsarin. The building of the school at that time did not survive. 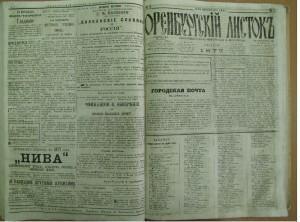 He died on 17 July (29 July) in 1889, buried not far from his home on the bank of Tobol river near his father’s grave. In “Orenburg list” on 30 July 1889, Altynsarin was called “the first apostle among the Kirghiz, who shed light of the European civilization and love of Russia to dark nomads of his tribe”. Necrology informed: “In Kostanay city of Turgay region on 17 July after extended and serious illness (lung inflammation) died the first inspector of public institutions in Turgay region I. Altynsarin or as he liked to call himself Ivan Alekseyevich Altynsarin: 52 years. This is a heavy loss for the region and the Russian work in the Kirghiz steppe”.

It is worth to note that Altynsarin was in friendly, respectful relations with the editor. Therefore Altynsarin materials often found a place in the pages of the newspaper. In "Orenburg list" the first materials of Altynsarin were about the Russian Cossacks, settled on the ancestral Kazakh lands, a reduction in pasture cattle-breeders, but jute in 1879-1880 greatly upset him.

He did much in the collection, compilation and publication of the Kazakh oral creativity samples. Folk legends, epics, tales served as the basis for such famous works of Altynsarin as "Satimir Khan", "Son of a poor man and son of a rich man", "Izbasty". Altynsarin collected materials on the history of Kazakhstan, included in his book "Maktubat" ("Chrestomathy"). The second part of his creation - "Kirghiz chrestomathy" - should include sections on geography, history, technical subjects, but was not published because of the author's death.

Pedagogical ideas, issues which Altynsarin raised in pedagogical works, became a part of an anthology of pedagogical thought in Kazakhstan.