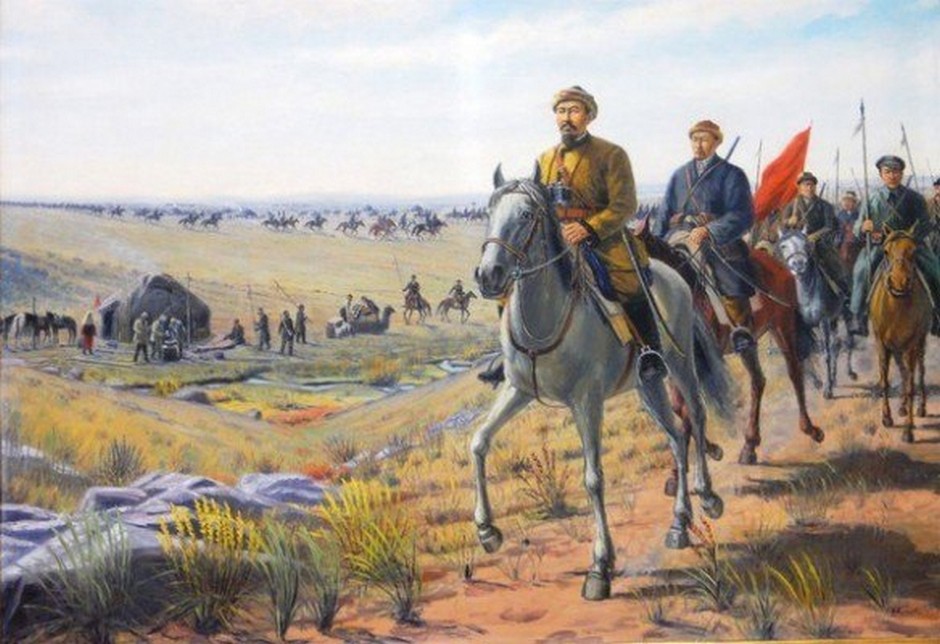 One of the most common names in newspapers of Turkestan Kazakhs belongs to Amangeldy Imanov, the leader of the national uprising in 1916 against the Russian government in Turgai steppe. Many articles were written about him in the printed editions. Poets devoted a lot of poems, playwrights wrote stage plays and still continue to write. In addition to it, a film about Amangeldy’s life is in production and monuments are placed in his honor.

This article, rhymes, poems, stage plays, film and monuments, all of them are focused on idea of presenting illiterate Amangeldy, who had never gone outside of his native land, as incomparable revolutionary, international Bolshevik, who stood above the nation and nationalism, enemy of religion, major figure, who brought Turks with Russian Bolshevism and international uprising close together. While, Beimbet Mailin and Gabit Musrepov together with Russian writer Vsevolod Ivanov, who sold their ambitions and feather, tried to create bolshevist image for Amangeldy in their articles published in newspapers ‘Sotsialny Kazakhstan’ and ‘Kazakhstanskaya pravda’, the national poet Esenbaiuly Sagit describes Amangeldy’s image close to reality in his poems ‘The year of Amangeldy’s uprising’, ‘DEeath of a hero’ published in ‘Sotsialny Kazakhstan’. In 1916, when Amangeldy’s warriors attacked Turgai, Sagit Esenbaiuly was an elevator worker on the railway. Esenbaiuly strived to show Amangeldy’s image closer to Bolshevik, embellishing and misrepresenting his image. In Esenbaiuly’s descriptions, who sought to show himself as Amangeldy’s comrade-in-arms, the image of batyr was presented as alienated from class, nation God. 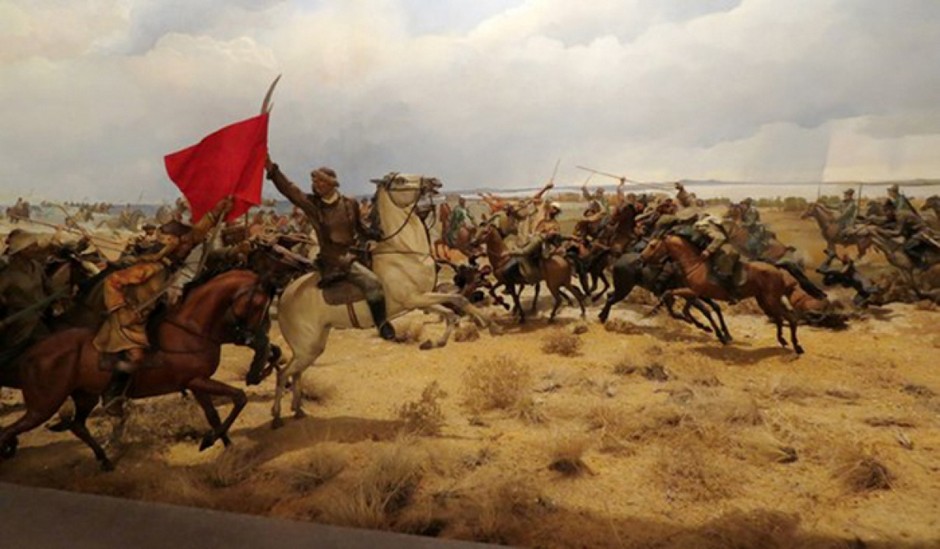 Those, who considered Amangeldy to Bolsheviks after his death had only one proof. The fact that he died at Alash Orda members’ hands in 1919. 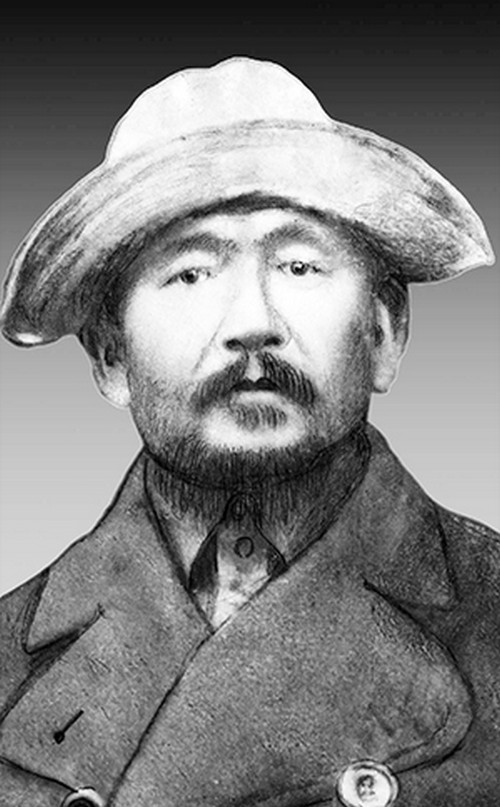 Members of Alash Orda killed him not because he was Bolshevik. The truth is that Amangeldy was from Kipchak tribe. When uprising started in the spring of 1917, the enrollment of Turkestan Turks on the frontline works had stopped. Alikhan Bukeikhanov, appointed commissar of Turgai volost by the Provisional government, called the Turgai population to stop the uprising and return to civilian life. Alikhan Bukeikhanov’s close friends – nationalists Akhmet Baitursynov, Miryakub Dulatov held campaigns among ordinary people and called inhabitants of steppe volost to calm down. Due to the fact, Akhmet and Miryakub were from Argyn tribe, people from Argyn tribe listened to their words and did not obey Abdigappar elected as ‘khan’ and Amangeldy. As a result, Turgai Kazakhs who fought against Russian colonization divided into Kipchaks and Argyns.

At this time, rumors that ‘Russian settlers will return to Russia after uprising’ were spread. After that, the issue about division of the lands inherited after Russians arose. Argyns and Kipchaks started persistent struggle. Kipchaks, who never divided on tribes, began to perceive Akhmet Baitursyniv and Miryakub Dulatov as leaders of Argyns. Abdigappar and Amangeldy were overcome by inter-tribal struggle, so after all-Kazakh kurultai in 1917, that was held in Orynbor and in the summer of 1918, when I visited Turgai steppe, he sent me his people and Asked ‘to be our political leader’ in the fight against Alikhan Bukeikhan from Tore tribe and Akhmet, Miryakub from Argyns. Of course, I withdrew from those rpoposals, because I understood clearly that the division of people into Kipchaks and Argyns and even Uzbeks, Kazakhs and Turks is equal to death for Turk, in particular, for the person, who raised the flag of the national liberation uprising. 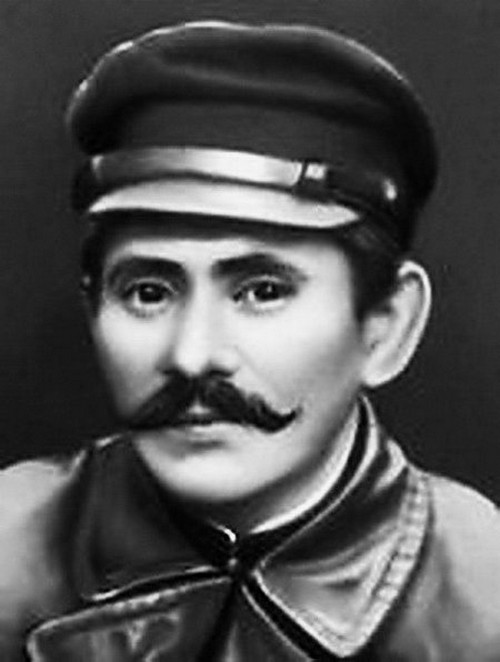 He could not come to the Kazakh land himself. There was Russian Red Guard near him. After a while, Stepnov-Zhangeldin turned Kipchak Amangeldy against Alikhan from Tore and Akhmet with Miryakub from Argyn. They gathered Russian Red Guard and people around Stepnov-Zhangeldin and Amangeldy, and started fierce war. Illiterate Amangeldy perceiving the word ‘Bolshevik’ as ‘Kipchak’ died in the fight against Alash Orda people. This is the truth. At this time, the Bolsheviks who accused the nationalist rebel Miryakub Dulatov in the murder of 'Bolshevik batyr' Amangeldy, wanted to kill the most outstanding, considered representative of Turkestan Turks. Perhaps, the Bolsheviks had managed to kill Miryakub yet…

Materials on theme
Nurtas Ondasynov. Kunayev’s Chief
Sickle and hammer - death and hunger
The Deportation of People during the War. Part I
10 INTERESTING FACTS ABOUT NAURYZ