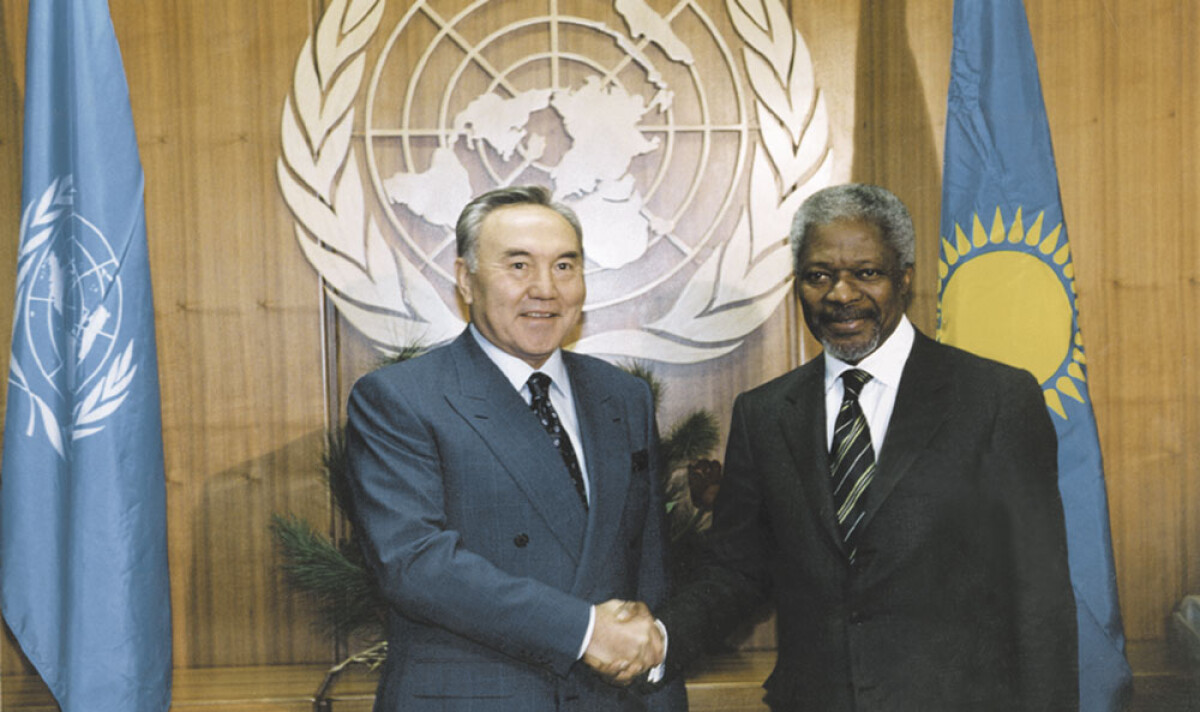 Kazakhstan was a nuclear military power along with Russia, Ukraine and Belarus

More than 100 missiles with nuclear warheads were on station of the territory of Kazakhstan. 40 strategic bombers with cruise missiles were located on the airfields. There were unique objects for the testing of nuclear devices and firing of the rocket-space technology (‘Baikonur’, Semipalatinsk, Saryozek) in Kazakhstan. By the Decree of the President of the Republic of Kazakhstan N.A. Nazarbayev as of 29 August 1991, Semipalatinsk nuclear testing ground was closed. This unprecedented decision was a manifestation of the republic’s peaceful disposition and attracted wide support from the international community.

On 21 December 1991, the CIS countries agreed to retain a unified command and integrated control over nuclear weapons.

However, in 1992, the creation of joint military forces failed due to the dual positions of Russia and Ukraine. According to the analysts, the existence of nuclear weapons had both advantages and disadvantages for Kazakhstan. On the one hand, nuclear weapons are the indicator of inclusion to the scientific and technological achievements; possession enhances the international prestige, it could become an argument in political negotiations with the West. However, the possession of nuclear weapons created considerable risks for the country, making ‘nuclear’ status delusive.

On the other hand, in 1992, a letter to the name of the President of Kazakhstan was received by Ministry of Foreign Affairs of Kazakhstan through diplomatic channels from the leader of the Libyan revolution Muammar Gaddafi, who offered to save the country's nuclear arsenals as the first Muslim atomic bombs, and pledged to give billions of dollars in aid to its sustentation. The Deputy UN Secretary-General Kassym-Zhomart Tokayev said about this interesting fact at the First Nazarbayev readings. In his opinion, such generous promises of the rich countries could seem very attractive for any irresponsible politician, but the real statesman is different from the usual politician by the fact that he does not think in short-term conformist categories, but follows considerations of strategic order.
President N.Nazarbayev had to make a historic decision in such complicated situation. Having weighed and sizing up all the risks, Kazakhstan abandoned nuclear weapons. This was a very important and difficult decision. However, the Head of state set two requirements: first, the nuclear powers should guarantee the security of Kazakhstan, secondly, the Treaty to reduce weapons of strategic purpose should transfer from bilateral to multilateral format. The key event occurred on 15 May 1992 in Tashkent, when six countries of the CIS signed the Treaty on collective security that strengthened regional and national security and opened the way to nuclear-free status of Kazakhstan. 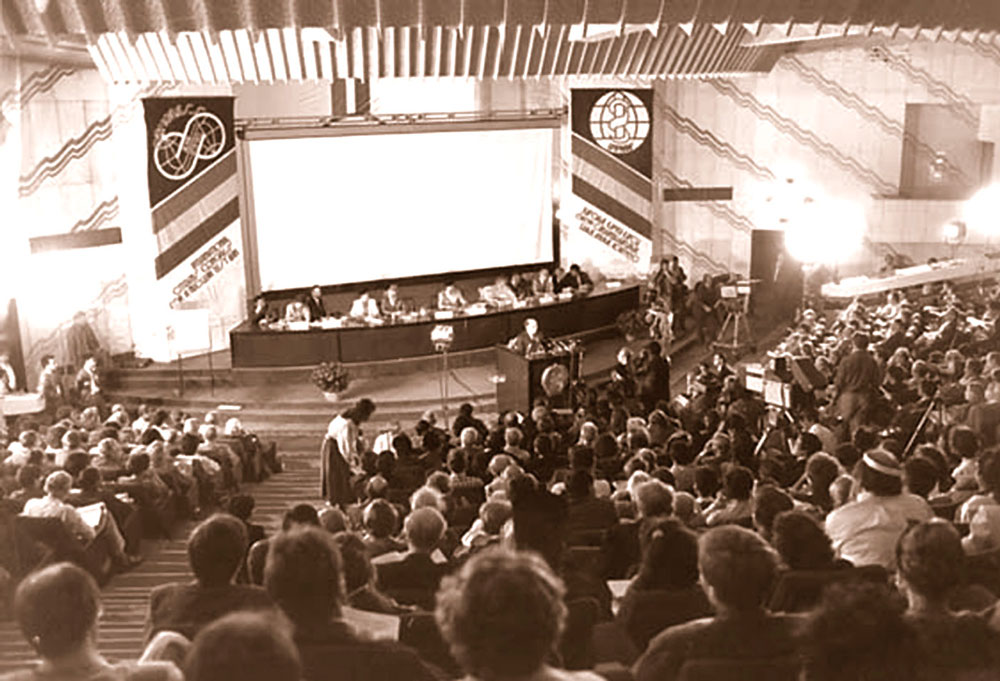 On 23 May 1992, the Ministers of Foreign Affairs of Kazakhstan, Russia, Ukraine, Belarus and the U.S. Secretary of State signed a Protocol to the Soviet-American Treaty on the reduction and limitation of strategic offensive arms, specifying the area of parties’ responsibility in Lisbon. Kazakhstan, Belarus, Ukraine pledged to join ‘as soon as possible to the Treaty on non-proliferation of nuclear weapons as states parties, not possessing nuclear weapons’ in Lisbon Protocol.

Since 1992, the American program of joint reduction of the nuclear threat called the Nunn-Lugar Cooperative Threat Reduction, named after U.S. senators Sam Nunn (Democrat) and R. Lugar (Republican) started to work in Kazakhstan. The funding was allocated to the CIS countries - Russia, Belarus, Kazakhstan and Ukraine by this program- for the purpose of safe and reliable dismantling and elimination of nuclear, chemical and biological weapons. In 2003, Kazakhstan highly appreciated the contribution of U.S. senators R.Lugar and S.Nunn, awarding them the orders ‘Dostyk’ of the 1st degree.

On 13 December 1993, the Supreme Council of Kazakhstan voted for the accession to the Treaty on the non-proliferation of nuclear weapons. Kazakhstan strictly adhered to the duties of the state, not having nuclear weapons. This position contributed to the positive perception of the country by international community.

On 5 December 1994, the heads of Russia, the USA and Great Britain signed a Memorandum on security assurances to countries that signed the Treaty on the non-proliferation of nuclear weapons at OSCE Summit in Budapest. The Memorandum signified the international community's recognition of Kazakhstan's fulfillment of their duties on the withdrawal of nuclear weapons. Later Kazakhstan received security guarantees from France and China. Given international commitments of major powers, permanent members of the UN Security Council guaranteed the security and territorial integrity of Kazakhstan.

In 1994, Kazakhstan became a member of the International Atomic Energy Agency (IAEA).

By May 1995, nuclear weapons were removed from Kazakhstan, and rocket launchers were eliminated. Thus, Kazakhstan fulfilled all the commitments on withdrawal of nuclear arsenal and the elimination of its infrastructure. In the framework of IAEA, the plan for the provision of technical assistance to Kazakhstan in the field of control and accounting of nuclear materials, nuclear power plants, the organization of the state system of physical protection of nuclear materials was implemented. Participants of the plan were Great Britain, the USA, Sweden and Japan.

In 1996, Kazakhstan became a party of the Treaty on comprehensive ban of nuclear tests.

In 2006, the Treaty on creation of the nuclear weapons free zone was concluded in Semipalatinsk. This seminal treaty established such a zone, bordered with nuclear powers for the first time. The IAEA called the Treaty real contribution to the global process of disarmament and non-proliferation of nuclear weapons. Thus, in the early 1990s, Kazakhstan took a responsible historical decision and acquired non-nuclear status. As a result of agreements with the major powers, the country received security guarantees, strengthened state sovereignty, territorial integrity and protected itself from external threats.

The country chose a policy of demilitarization and nuclear disarmament, and became a factor in regional security for the world community, voluntarily abandoning of the fourth largest nuclear missile potential in the world and thus, showing an example to the world. Therefore, on 2 December 2009, the UN General Assembly adopted a resolution on declaring 29 August (the day of closing Semipalatinsk testing ground) as the International day against nuclear tests by Kazakhstan’s initiative.

In April 2010, the UN Secretary-General Ban Ki-moon supported the idea of the President of Kazakhstan on the establishment of a nuclear-free world. It gave evidence to the fact, that the international community recognized the significant contribution of Kazakhstan for global security strengthening. 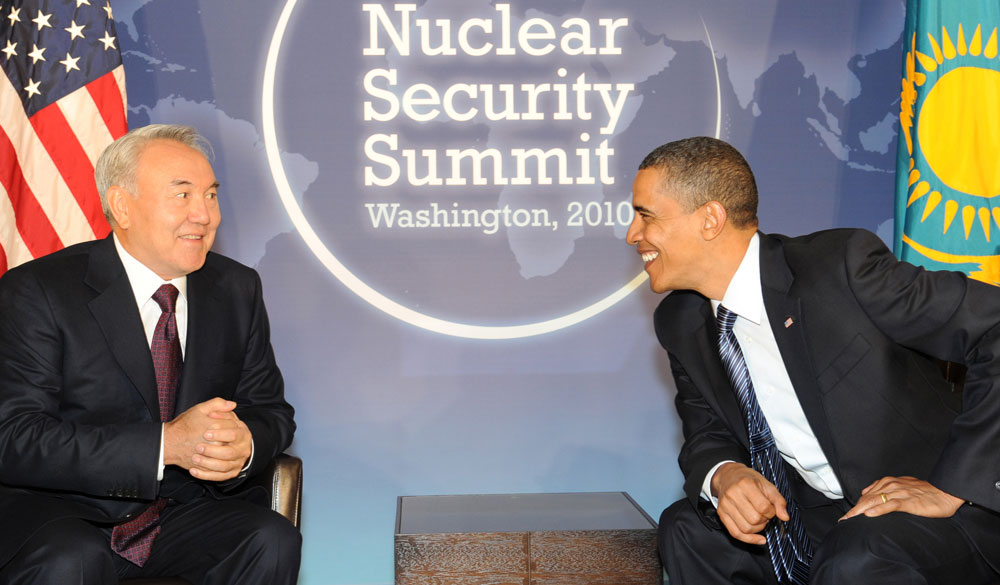 The next step toward a nuclear-free world was made on 29 August 2012 in Astana. The capital of Kazakhstan hosted the international conference ‘From nuclear test ban to the nuclear weapons free world’.

The conference was held in Astana on August 29 – a day, declared as the International Day against Nuclear Tests by the UN. The head of state mentioned a number of key initiatives, designed to enhance the dying process of strengthening global nuclear security. It is necessary to highlight the international project ‘ATOM’ from the numbers of offers. The name of the project is composed of the first letters of the four words in the English language – Abolish Testing Our Mission, which means ‘testing abolishment is our mission’. In the framework of the project, any human on the Earth, who opposes nuclear weapons, can sign an online petition to the governments of the world to abandon nuclear tests and to achieve the early entry of the Treaty on comprehensive ban of nuclear tests into force.

The President of Kazakhstan urged the participants and all people of good will in the world to support ATOM project and make building of a world without nuclear weapons a key objective. Initiatives, announced by Nursultan Nazarbayev received universal approval and support. Japanese parliamentarians took the initiative to award to Nursultan Nazarbayev the Nobel Peace Prize during the work of the forum. Their initiative was supported by the people of the Marshall Islands, which was announced by U.S. Congressman Eni Faleomavaega. This is another step toward a nuclear-free world – the new design of the world order.