Home News History in 5 minutes History of Emblem of Kazakhstan

History of Emblem of Kazakhstan 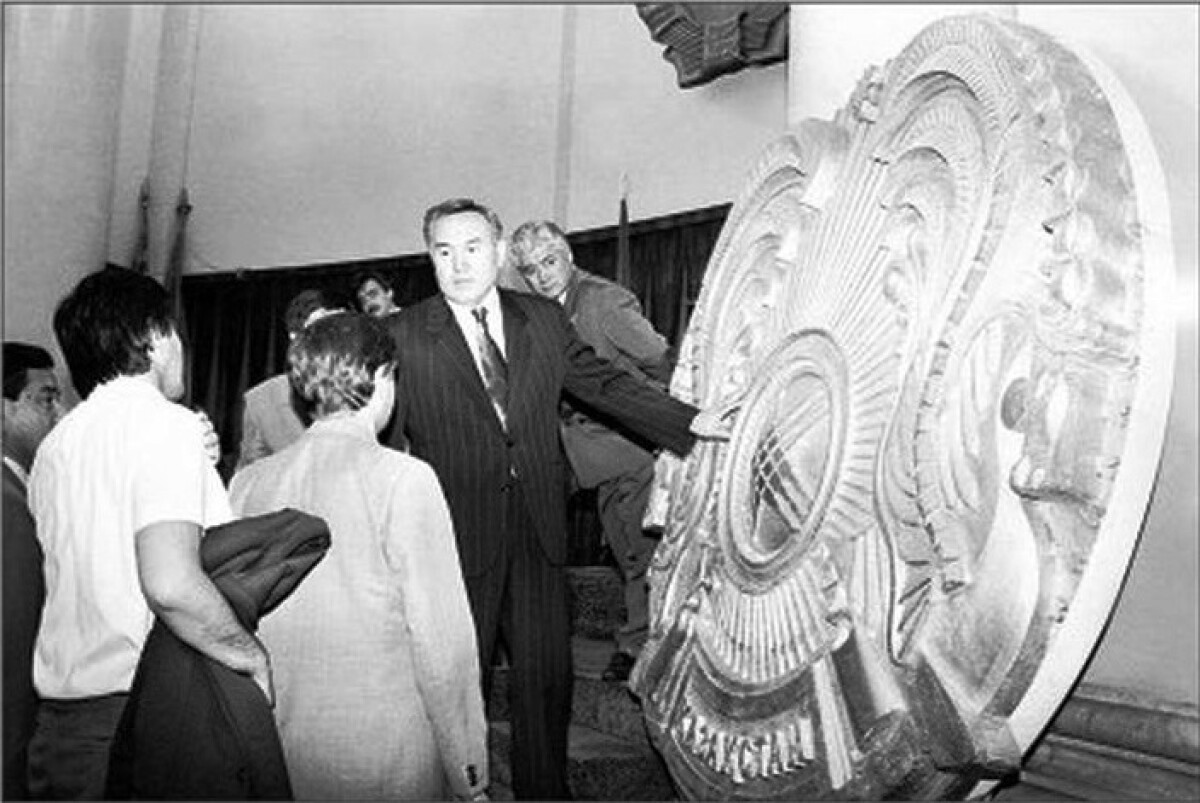 What were the first versions of State emblem of Kazakhstan? What were ideas of its author Shot-Aman Ualihanov and Zhandarbek Malibekov?

On October 2, 1991, when Kazakhstan was not independent yet, Kazakhstan astronaut Tokhtar Aubakirov departed to the space. This historical event is still in the memory of the people. He departed there with plate on his breast which is shown below. The author of it – Shot-Aman Ualikhanov, the architect, famous scientist and public figure. It had the image of half moon, shanyrak (the top of yurt) and star in the blue sky. 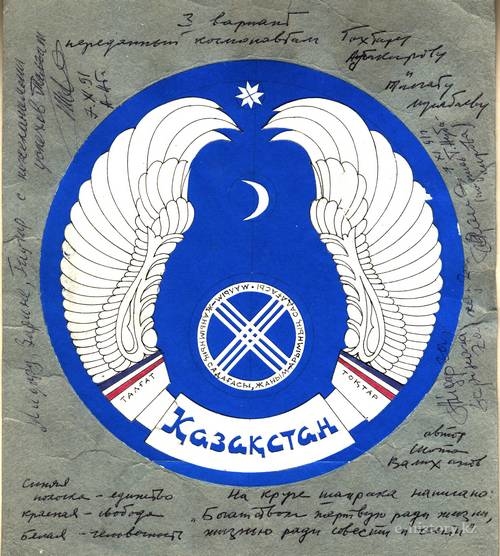 On October 10, 1991 the article “Kur shulaymyz, zhok zhalau, bayraksyz kayrat – bos kayrat” where was written how architect Shot-Aman Ualikhanov created a sample of emblem, in the newspaper “Ana tili”. The article has the history of two wings. These wings symbolize goddess Nika from the Greek mythology. The goddess is always represented. 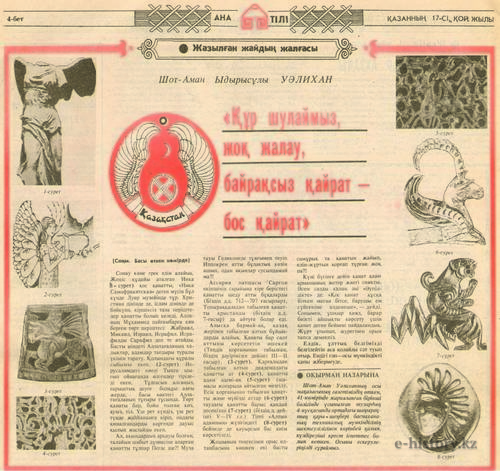 Moreover, the author of the article writes that in any religion angels are always represented with two wings. At the same time, as a result of excavation in the territory of Kazakhstan find gold jewelry on which the images of wings depicted. So, on the gold diadem found in Kargaly, the winged horse and the winged person, and on the products found in the Issyksky barrow – winged and horned horses, winged leopards in mountains, etc. is represented.

Thus, after heraldic and archaeological researches there was the first option of the coat of arms. And in issue No. 48 of the "aza debiyet_" newspaper – "The Kazakh literature" of November 29, 1991 left article "a aza қ halyna ң eltabasa қандай bolua керек?" – "What has to be the coat of arms of the Kazakh people?"

Thus, after heraldic and archeological researches there was the first version of emblem. And in the issue No. 48 of the newspaper “Kazakh literature” of November 29, 1991 the article “How does emblem of Kazakh people should look like?” was released.

In the article there is a full description of how first emblem looked like. The author wrote that blue color on the emblem symbolizes close connection of the person with space. The star flickers in the firmament, and under it the moon settled down. The star symbolizes happy future of Kazakhstan.

On the external circle of shanyrak (the first version of the emblem) there were written following words: “Conscience is more expensive than life”.

Below - an inscription "Kazakhstan", on both sides from it there are images of a lion and a wolf which were added during further changes. Images of a lion and a wolf show that animal style of Sakas is preserved till today. Moreover, in the lower part of the emblem there are strips of three flowers: blue, pink and white. Blue color designates unity, pink – freedom and white – morals.

Thus, work of the famous architect Shot-Aman Ualikhanova at first visited space, and after, having undergone some changes, was offered in competition on the State Emblem. 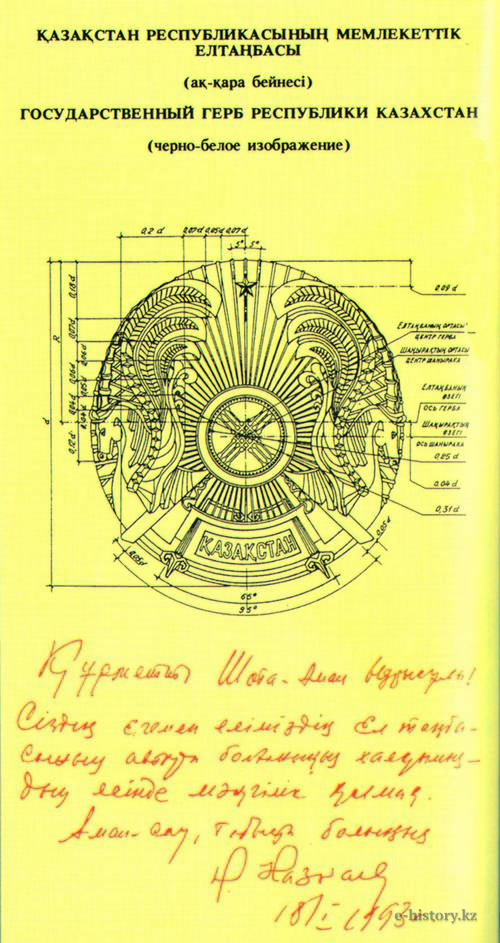 “The emblem was created due to longing for the country” – said Zhandarbek Malikbekov in the interview which he gave to the “Celebrity Family” magazine.

“I examined all our tamga (patrimonial signs) and saw the emblems of all states of the world. I realized that each people differ in the history and mentality. All life and history of Kazakhs were created together with yurt…” – continues Zhandarbek Malibekov.

"After the ancient Sakas period the Kazakh people were divided into three zhuz (tribes) who made the uniform nation. Thus I created the emblem so that three big top wings were symbolized by three zhuz of one people. And three lower wings are a modern generation which came from these three tribes.

If you look closely you will notice that in the center of three big wings there are lines. They symbolize “aristocrats” (Tore, kozham, sanuka, tolengity and others), which are not a part of these tribes and auyki (dome polse) - people living in our country…”, - continuous his thoughts Zhandarbek Malibekov. 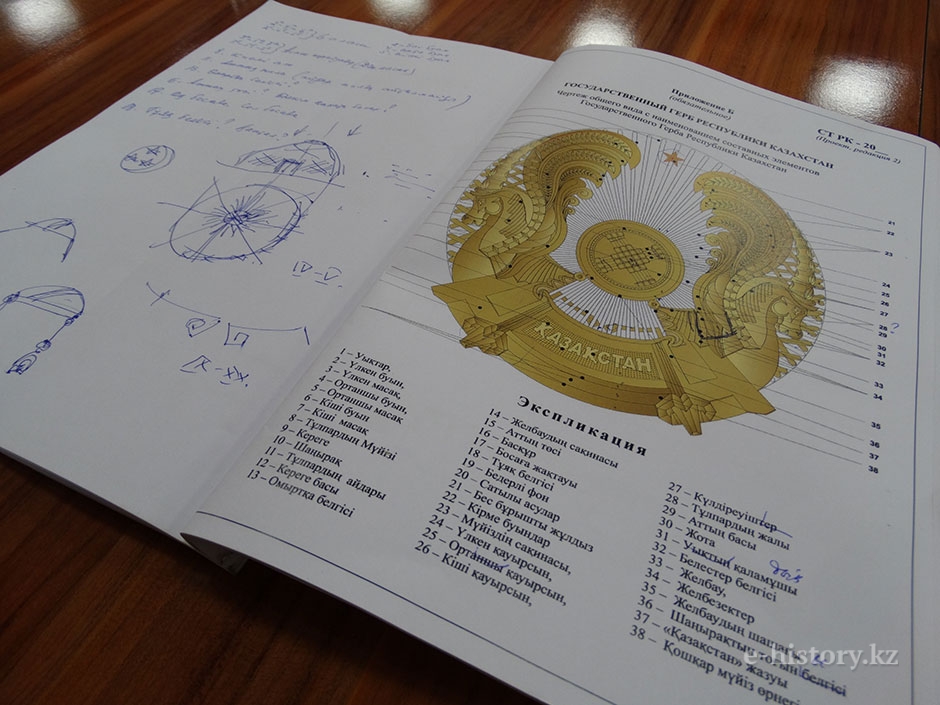 On January 1, 1992, competition on the state symbols was announced. 245 projects were submitted on competition of the State Emblem of Kazakhstan.

The deputies choosing the winner voted for Zhandarbek Malibekov's work (237 voices from 266). Sh. Ualikhanov was also added to authorship of the emblem because their works offered on competition were similar though both architects and prepared the projects, without seeing and without communicating with each other. Similarity of idea, ornaments and patterns was observed. At the same time, authors gave the identical explanation to elements of the emblem. 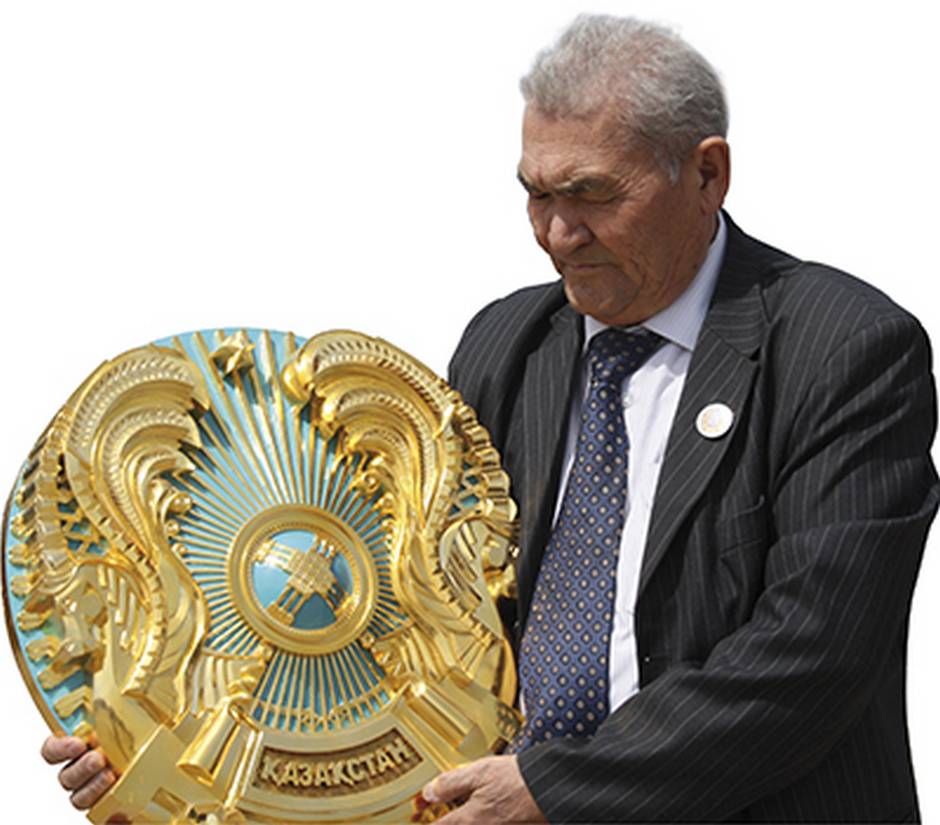 The famous literary critic Aliya Bopezhanova expressed the opinion on current situation: "The idea which came to one person, can occur and the second, as both that and another – the person. Such situation takes place to be when both of them live in one environment, in identical historical and cultural conditions..."

Both authors of emblems – Shot-Aman Ualikhanov and Zhandarbek Malibekov, thinking equally, created similar projects of the emblem. The work turned out successful.