Home News Philosophy of the Emblem

Philosophy of the Emblem 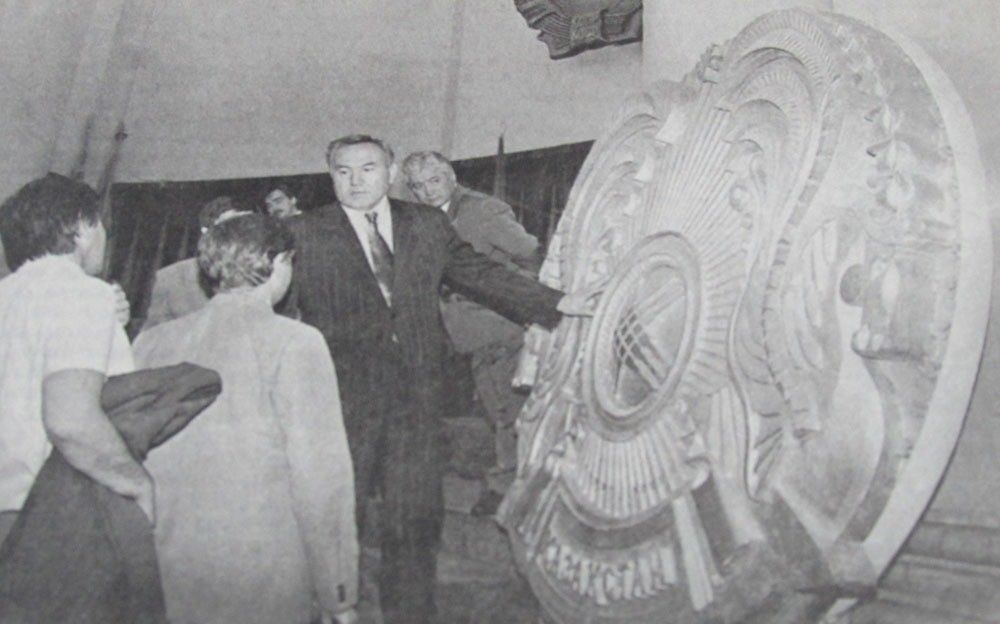 The State Emblem of the independent Kazakh state is one of the most beautiful state symbols in the world. “Kazakhstan's national emblem has no political background or signs of violence. It reflects the rich history, established customs, native culture, qualities of freedom, love, kindness and hospitality of Kazakh people for the centuries. It is a symbol of unity and spiritual unity of Kazakh people and different ethnic groups living in our independent country”, said the author of the emblem Zhandarbek Malibekov.

According to him, the State symbol – Emblem depicts the stages of historical development of the Kazakh people. The first stage of development was in B.C. V-IV S.C. – the Saka epoch, early Middle Ages, late Middle Ages – tribal unification, the emergence of ethnic structures of nations and ethnic groups, protection from invasion, the symbols of statehood, the XVIII-XX centuries – the formation of radical statehood. In other words, the Emblem of Independent Kazakhstan, along with the symbolic description of these periods, depicts a wide field, renaissance, powerful breakthrough in the development of heraldic methods, that aims to acquire the spirit of “Eternal Country”.

An author of the Emblem, Zhandarbek Malibekov, published his book the “Emblem of Kazakhstan” in 2017. A special attention is paid to every detail of our main state symbol in the section of the work called “Philosophy of the Emblem”. According to the author, a special attention was paid to the nomadic character of the liberal Kazakhs, who embodied the philosophy of the steppe during the creation of the Emblem. “In the steppe life, in Kazakh philosophy, a special attention is paid to the natural phenomena of the Moon, Sun, Earth and the Stars. Since the whole life is connected with these phenomena, the people of the Great Steppe have mastered the science of nature. He knew the dimensions of time and period through the movement of stars. A nature of the birth and location of the moon shows its inconvenience to the peasant. The weather is predicted by the direction of the wind, various natural signs. It adjusts its economy accordingly”, he said. 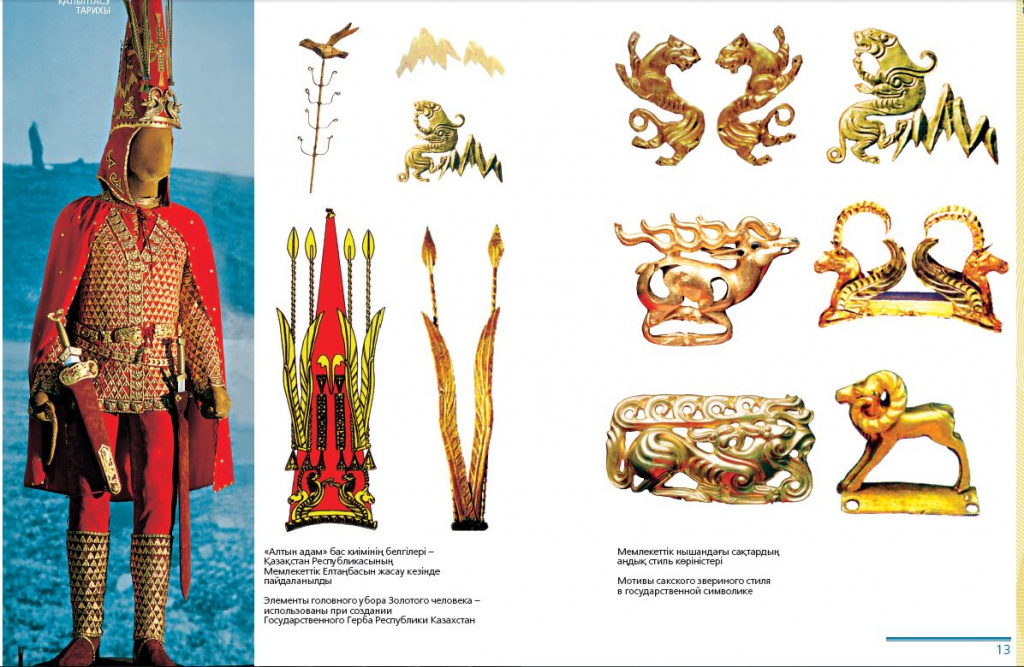 For the first time in the history of world heraldry, shanyrak is used as a state symbol. It symbolizes the integrity of the country, the hearth, unity of the family. The Kazakh people were able to raise the height of the shanyrak, the width of the kerege, the strength of the bosaga to the level of a symbol, both with blessings and various images. The concept of shanyrak, wooden lattice, shoal is a symbol of the country. An image of the shanyrak is a symbol of a common family, the common home for all ethnic groups living in Kazakhstan. Shanyrak is the main unifying concept for the society.

The circle is a symbol of infinite life and existence. There is a Kazakh proverb, “Man is a shanyrak, country the country is the uyk”. A man is the equivalent of leadership, courage and character.

There is a notion of “Sacred black shanyrak” that is inherited from our ancestors. In the recent times, the phrase “Joy of family” have been used very often. The word “Shanyrak” also means “Home, family”. It describes young people who have just got married and started their new life together as they “Created family”. “Actually it is a wish and belief that the family will be strong and have a high status. This is also related to our independence. Shanyrak is a sacred concept that connects the yurt and the blue world. Shanyrak consists of the rim, two-dimensional cross bar and warranty parts. A rim is a circle that gives a round shape to an ordinary shanyrak. And the two-dimensional cross bar makes the dome of the roof, the warranty is that the clown will not move”, Z. Malibekov wrote.

Kerege on the Emblem means that the foundations of our independent country should be strong. The kerege, uyk, bosaga, shanyrak are also reflected in Kazakh symbols. Kerege raises the shanyrak through uyk. It protects and preserves from an external phenomenon. Being properly covered, it will withstand a great deal of adverse conditions. A traditional notion of “Let there be a plenty of joy” has a wide range. A symbolic image of the kerege means that the field of our independence should be expanded, and we should have equal legal relations with the countries of the world, that is, the field of our country should be expanded as well. The Kazakh yurta is a unique architectural masterpiece in the world, that has found a harmonious harmony. Each part of it gives the Emblem a special character.

A dignity of bosaga. The emblem depicts a double helix falling through two rings on either side of the shanyrak. The word “Let your bosaga stay strong” is a sacred wish of the Kazakh people. “White bosaga” is a sign of purity, consistency and good intentions of parents. This symbol means “Let the bosaga of our independent Kazakhstan be strong!” The head of the scales at the top of the bosaga, decorated with Kazakh ornaments, symbolizes balance and justice. The Republic of Kazakhstan is a secular, legal state. According to the Constitution, the human rights, freedoms and equality are acknowledged first and foremost. The method of heraldry in the nature of the head of the scales was used in order to convey these concepts.

Hence, the prohibition of “Do not cross the bosaga” (or “do not be attached to the bosaga”) was born from this. There is also the ritual of “Anointing the bosaga”. When young people get married or someone gets a new house, their relatives come and anoint the door of the new house. It means “Let this house be full of happiness, joy and blessings”. That's why the Kazakh people greeted the newlyweds and wished them the blessings.

Bosaga is used in the structure of the yurta in order to keep a certain distance between the sign and bosaga, to ensure that the door opens and rotates on both sides to enter and exit the house. This specially made part of the yurta is attached to the kerege. 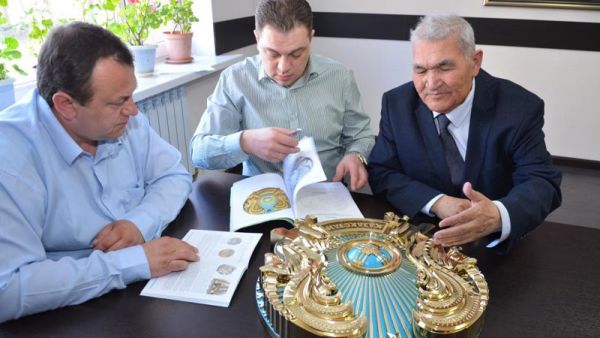 Uyk is a structural element that connects the kerege and shanyrak, which is considered as one of the main parts connecting the kerege and middle part of shanyrak. The figure of uyk includes the names “Forearm”, “Shoulder”, “Snow”, “Pen”. The upper straight side of the uyk is called “Forearm”, and the four-sided end of the shanyrak, that is inserted into the pen, is called “Tip of the pen”. An umbilical cord is pierced on the side that is tied to the head of the bed, and a cord is passed through it, which is called the “Umbilical cord” (sometimes, it is called “Baby cord”). It is bent inwards from the hips, so as the dome pattern starts from these hips. There is a saying: “The strength of the family is in the uyk”.

An inscription “Kazakhstan” is the name of the state, that is marked on the flagpole, from the shanyrak to the bosaga. According to the Constitution, “Kazakhstan” means “Kazakh country”, “Kazakh state”, “Republic of Kazakhstan”. The inscription is located in the middle of the sign. It is embossed with small holes and painted by pink gold color.

A color of the Emblem is golden, the sky is blue between the uyks and shanyrak clowns. The appearance of our Emblem is like a shield used by heroes. It conveys the essence of strong defense. An architectural structure of the emblem is based on the mathematical laws, classical versions of artistic and heraldic methods of depiction.

These are the ropes that are tied to the shanyrak through the ring. On the windy day, the house is weighted in order to keep it from shaking. Zhelbau is a double belt attached to the shanyrak of the yurta. The heavy objects are tied to the zhelbau in order to prevent the house from collapsing in strong winds. “Once you have a house, you need a belt and zhelbau”, says a Kazakh. Zhelbau is an ornament of both decorative and durable nature, that is attached to the shanyrak in four places and carried to the kerege, each of which has four rows of four strands. The Emblem symbolizes the release of bosaga in the form of heralds. It is defined by the inscription “Kazakhstan” on the sign to strengthen the meaning of the concept “Let your bosaga be strong”. When a hurricane strikes, the ends of these windbreaks are tied at the bottom and hang heavy loads on them.

The ferret in the emblem is a concept that describes the balance of the world. A heraldic element that maintains a load of symmetry on an axis like the head of a scale.

There is a five-pointed star on the emblem. It is a symbol of the microcosm and human. A circular character of the symbol is a symbol of life and eternity, that is especially revered by the people of the Great Steppe.

“Everyone has their own star to guide their lives”, people say. This star is also characteristic of the state. Also, we believe that the star of our country will be bright and high. Every citizen of Kazakhstan should be guided by that star, hoping that the star of the country will move forward, lead to the new path and future.

The “Five-pointed star” in the emblem is associated with the idea of ​​the President “Eternal Country”, that defines the path of development and prosperity in the world. Speaking at the XII session of the Parliament of the Republic of Kazakhstan on June 4, 1992, the President N.A.Nazarbayev said: The Kazakh people say, “Everyone has their own star, so the people say, “Let your star shine!” So, we are a young independent state, our state has its own way of development”.

The hearts and hugs of the people of Kazakhstan are always open to the representatives of five continents. The five-pointed star is like the crown of the Emblem.

Family is the golden pillar of the Kazakh steppe. The Kazakh people considered shanyrak as the sacred and highly valued thing. Even if it cuts its hair to take care of the yellow thing, black shanyrak is a symbol of fire, the hearth is a symbol of Motherland.

Author: Ykylas Ozhay
Use of materials for publication, commercial use, or distribution requires written or oral permission from the Board of Editors or the author. Hyperlink to Qazaqstan tarihy portal is necessary. All rights reserved by the Law RK “On author’s rights and related rights”. To request authorization email to mail@e-history.kz or call to 8 (7172) 57 60 13 (in - 1163)
Қазақша Русский English
MOST READ
Month Year
Burial mounds of the southwestern part of the Semirechye region
Union of the Archives and Library
The referendum on the Constitution is a significant stage of democratization
Heroic mothers of the great steppe
Philosophy of the Emblem
14 monuments at Tekturmas
The rural akims: the country's hope is in the elections
Kazakh historical drama Tomiris premiered in Istanbul
Stolypin about the worries and hopes of immigrants to the Kazakh steppes
ALASH IDEA IS THE PROTECTION OF KAZAKH STATEHOOD
A tireless explorer of the Kazakh land
SWITCHING TO THE LATIN ALPHABET – UNITE ALL KAZAKH PEOPLE
Kunaev Dinmukhamed Akhmedovich
People who eat horses will kill you
Kazakhstan's participation in the Winter Olympics has a long history