Home News On the formation of Eurasian Union of States

On the formation of Eurasian Union of States 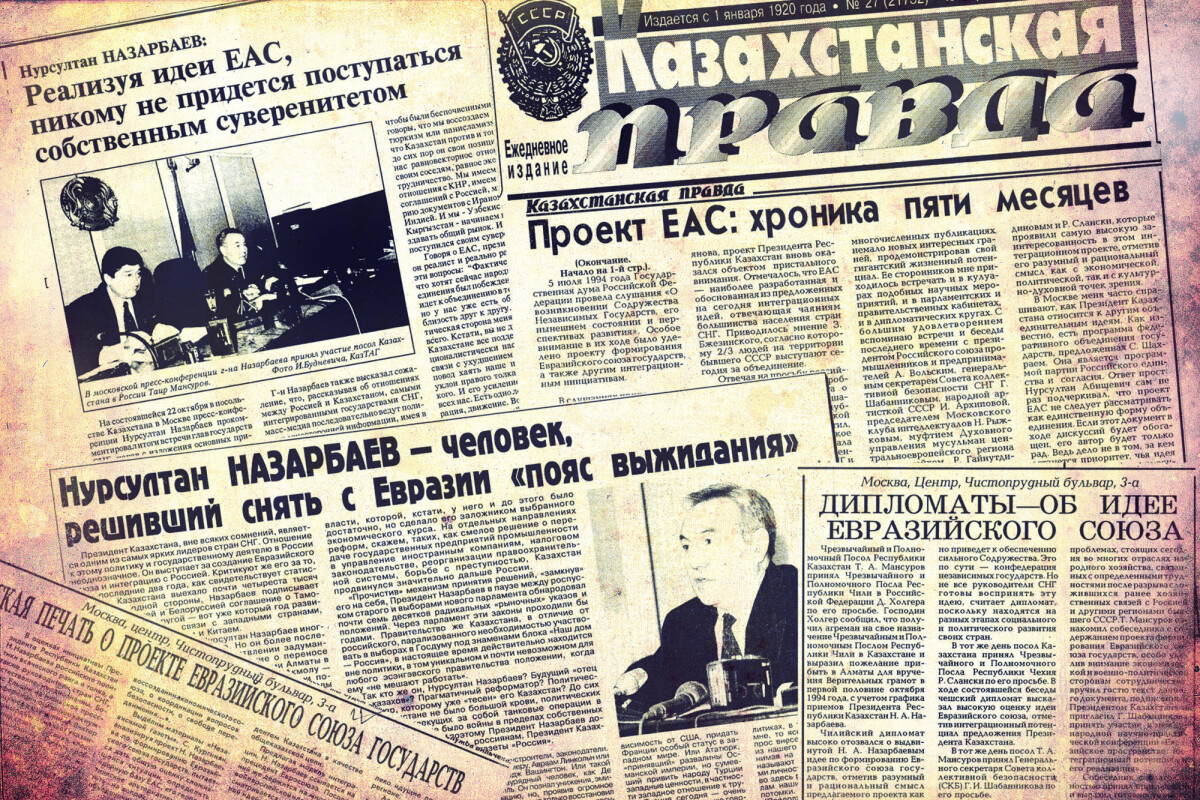 In June 1994, carefully integrated project was sent to the Heads of States and then published in the press.

For the first time the new integrated association was called Eurasian Union in the official document.

Nowadays, all CIS countries continue to experience a deep crisis in all spheres of public life — economics, politics, ideology, international relations and growing socio-economic stress. This occurs under conditions where development of the Commonwealth of Independent States is determined by two trends. On the one hand, there is a further development of the national state and on the other there is a trend towards integration of the Commonwealth.

CIS as interstate association plays positive role in the legal interstate relations of its member countries. The potential actions of CIS are not exhausted. Nevertheless, current structure of the CIS bodies not allows realizing fully the existing potential for the integration. Not only leaders of the Commonwealth but also the most of the population of these states pay attention on this.

Past experience shows the need for the functioning of the CIS transition to a new level of integration. It will ensure compliance of commitments that was jointly accepted by all the participants.

International practice shows that an interstate association undergoing various stages in its development and complemented by new forms of cooperation. CIS has significant advantages such as high degree of integration of the economy, similar social and political structure and mentality of the population, as well as the multinational composition of most republics and common historical tradition.

All of these witnesses about the necessity of combining the nation-building with conservation and development on this basis of international integration processes. The logic of the story is that integration into the world community is possible only through the joint efforts of all the countries of the Commonwealth, which uses powerful integration capabilities formulated in decades.

Bequeathed the single economic complex structures are continuing to corrode. Objectively die the obsolete forms of economic ties. At the same time, technological ties that respond to the economic interests of our country in the near and future perspectives are being violated.

The market reformation has unique regulations. No country can ignore them, without falling into an economic romanticism. It is advisable to combine efforts to reform the market economies of the former Soviet Union on the basis of the already formed over decades of close economic relations.

As world practice shows, only with the collective efforts of society is able to implement a successful upgrade. At the same time we see that ongoing attempts to solve this problem by individual countries of CIS are still unsuccessful. They will remain the same until the realization of economic integration in the new environment. On the other hand, it became apparent the unrealistic attempts of reorientation in any regional economic integration in abroad.

Eurasian Union (EAU) is the independent union of independent states that aims to implement the national and state interests of each member-country and available total integration potential. EAU is the form of integration of sovereign states with a goal to strengthening the stability and security of socio-economic modernization in the   post-Soviet space.

The serious problem of the states became an inconsistency of pricing policy on exporting raw materials. It has negative impact on their economic situation. On the other hand, it introduces an element of instability in the already established world economy. It forces third countries to adopt tough sanctions. Export of raw materials and energy is the most important source of income for our states. In this regard, there is a need of unified system of export policy of the CIS countries in the interests of all states to take serious action in case of non-compliance by any country agreed quotas and prices.

An important element that provides successful conduction of market reforms is to improve the national legislation of the CIS countries.

Further modernization is impossible without the convergence of legislative bases of economic activity, as the differences between them become serious obstacle integrative processes in the economy.

Considering the difference between the countries in the level of development of market economy, democratization of political process, we suggest to form additional integration structure of EAU that combined with the activity of the CIS. This takes into account the multivariate of integration, different rates and heterogeneity of different vectors in the development of the CIS states. This gives grounds to speak about the urgent need to develop a new economic order in the CIS. The goal is coordination of economic policies and the adoption of joint program of economic reforms by the member states.

Socio-economic and political crisis occurs on the basis of multinational population almost all CIS countries. As the consequence, the growing ethnic tensions, which led not only to the domestic tension, but in some cases develops into interstate conflicts. This situation undermines the institution of the Commonwealth of Independent States.  Therefore, it is necessary to develop mechanism of deterrence, containment and maturity of different types of conflicts with the joint efforts.

Nowadays, all CIS countries are in search of forms of government adequate to internal conditions. However, in practice, neither unitary nor federal states of the CIS cannot be considered as fully stable.

The solution to the issues of economic integration dictates the necessity of creation political institution, which possesses sufficient volume of powers. They have to include regulatory functions of relations of states in particular, economic, political, legal, environmental, cultural and educational spheres.

So, it is time to eliminate obstacles to cooperate at a higher level and the simultaneous creation of its tools.

Currently, there is a process of disintegration in the field of science, culture and education. Once, the common cultural and educational space was compartmentalized. In these circumstances, the statement that “science has no borders” is simply untenable.

The outflow of specialists from science, culture and education sphere is increasing as the social and economic difficulties are deteriorating. These processes led not only to a break once a single system, but also to the isolation of cultural and scientific achievements world civilization.

At the same time striving to intensify the integration processes in the economy and politics should be based on the preservation and development of a coordinated policy in the field of culture, education and science. The need to preserve and strengthen the internationalization processes of production and practical use of new knowledge. The integration of research and development in science and technology has become an integral part of the globalization of industrial activity in general.

Isolation of the former Soviet Union from world’s cultural and scientific community is fraught with a new stage of lag in technology.

One of the key tasks for new states is to ensure the territorial integrity and security. Currently, the post-Soviet space is a zone of instability, a combination of different types of conflicts. It also faces the effects of tensions from outside of the CIS. Protection of external borders and the stabilization of the situation in the conflict regions can only be done through joint efforts of all interested states. It requires a coordinated approach of participants to the defense-related issue.

The problem of environmental safety remains one of the urgent and unresolved in the CIS countries. The ecological intensity was caused by several reasons. These include the nuclear weapon tests, activities of nuclear power plants, pollution, industrial waste and environmental degradation as a result of economic activities.

These problems are relevant for almost all CIS countries, especially since the major zone of environmental disaster usually located in the border areas. They are caused by the current technological base, methods of doing business, the basis of which was laid extensive orientation. Today it is impossible to solve any of these problems independently even for the largest state. Protection of environment is a global challenge requiring a major investment of joint efforts of all states.

For the discussion it is proposed the project of creation of new integration association with conditional name “Eurasian Union” (EAU).

The President of Kazakhstan