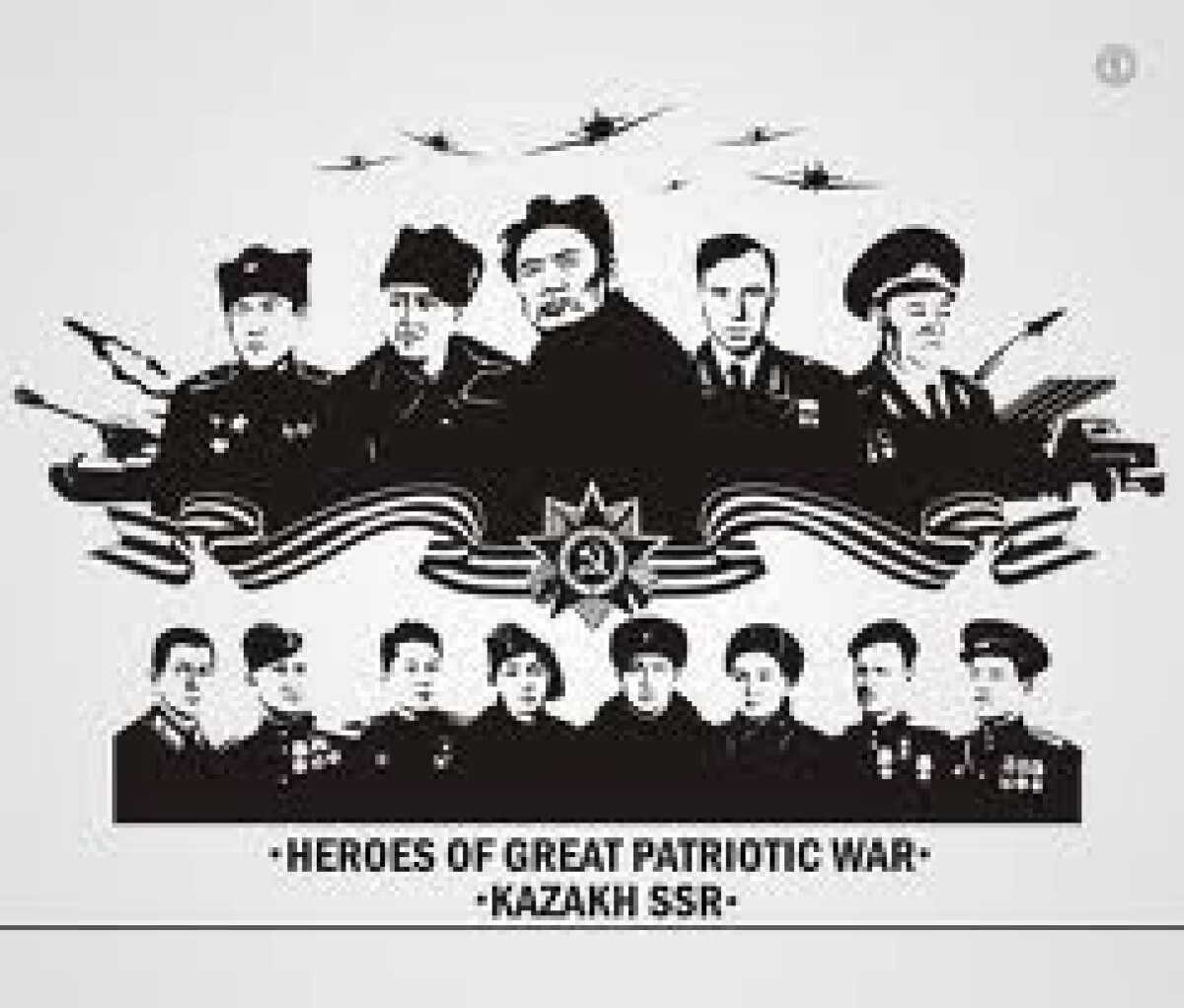 From the first days of war there was a guerrilla movement which thanks to mass character, organization, submission of the plans to problems of command of the Soviet Army gained strategic value.

Among others the Brest fortress was protected by frontier guards K.Abrakhmanov and V.Lobanov, shooter K.Imankulov, machine gunner E.Kachanov, a minometchik V. Fursov, gunner G. Zhumatov and other Kazakhstan citizens. Kazakhstan citizens battled for Liyepayu, Peremyshl, the island of Saaremaa, Murmansk, Odessa and Sevastopol. But despite firmness and the courage shown by thousand Soviet soldiers and officers, war developed in the beginning tragicly.

The reasons of severe defeats of the first months of war was a little. On the one hand, they were caused by strength of the opponent who was subduing 12 states and having 14 allies. The economy of almost all foreign Europe worked for Wehrmacht which during lightning victories in the West got experience of conducting operations in modern war and believed in the invincibility. In the armies developed along the Soviet borders three consisted of five soldiers and officers in nazi party and almost all passed school of political processing in ranks Hitler югенда.

However defeats of 1941 were caused not only strength of the opponent, but also miscalculations of the Soviet management. The USSR entered war without allies, and an anti-fascist coalition started creating only during aggression. By the beginning of military operations the otmobilizovaniye, reorganization and modernization of army weren't complete, and level of its combat training and discipline after repressions of 1937 — 1938 was low. In army the spirit of blind obedience, and Stalin's directing military affairs incompetence, still болееусугубляла situation was approved. Incorrect definition of term of the beginning of war was a large mistake. Stalin didn't allow thought of the war beginning with Germany before defeat of England and completion of preparation for military operations in specific conditions of the Soviet Union with its spaces, off road terrain and severe climate. Besides Stalin and the high military command mistakenly defined the directions of the main blow of the opponent, ways of his actions, and in this regard and a dislocation of own armies and bases of supply.

Together taken it led to that the Soviet armies suffered a number of defeats, suffered severe losses in manpower and equipment.

From the first days of war in the territory of the areas of the USSR occupied by the enemy there was a guerrilla movement which thanks to mass character, organization, submission of the plans to problems of command of the Soviet Army gained strategic value. Participated in it and Kazakhstan citizens: in the Leningrad region more than 220 Kazakhstan citizens, in Smolensk region — over 270, in Ukraine, in Belarus — about 3000. About 300 Kazakhstan citizens were participants of a resistance movement.

Wide popularity in the republic was received by I.S. Aryskin, A.Zhumagaliyev, K.G. Omarova's names, 3. U.Husanova, diversions safely operating at carrying out on roads, in ambushes and raids on garrisons of aggressors, at reflection of their retaliatory operations. A lot of work among guerrillas and the population was conducted by political workers Kazakhstan citizens of Akmolinsky, T.Zhangeldin, Z.Sain, V. Urazbayev, etc. Groups and connections of guerrillas ordered G. Akhmed-yarov, K.Kaysenov, N.A.Morogov, S.A.Oleksenko, S. O. Tuleshev, V.I.Sharuda. The rank of the Hero of the Soviet Union is (posthumously) appropriated to guerrilla commanders A.S. Egorov, N.V.Zebnits-komu and F.F.Ozmitel.

In aestivo-autumnal fights of 1941 the Soviet armies, despite losses and defeats, ruined the Hitlerite plan of "blitzkrieg", and the victory near Moscow began fundamental change during war. In fight on Volga, the Kursk arch and on coast of Dnepr they learned to build indestructible defense, to break through enemy, to surround and destroy large groups of the opponent.

For feats in the Great Patriotic War over 11600 people of a rank the Hero of the Soviet Union, including 497 Kazakhstan citizens, among them 97 Kazakhs were awarded. To the first of Kazakhstan citizens on July 22, 1941 the rank of the Hero of the Soviet Union was appropriated to the commander of the 19th tank division to major general K. A.Semenchenko, and the last (on December 11, 1990) to a panfilovets, the senior lieutenant of B. Momysh-ula who in the fall of 1941 in a battle of Moscow with the battalion visited an environment three times. It finished war by the colonel, the commander of the 9th Guards shooting division.

The republic is proud of fighting affairs of the parts created in its territory and connections of the Soviet Army.

The Aktyubinsk 312th division at Maloyaroslavets within a week conducted persistent defensive actions against three-four divisions and departed to river of Nar only when two shooting regiments left her structure, and in the third there was no more than a third of fighters. Merged from the remains of two other connections, divisions of the 312th made a new, 53rd division which finished war near Vienna.

The Chimkent 102nd shooting division defended in the northeast of Ukraine, receded the naseverny Caucasus and there was disbanded; the 74th sea shooting crew reorganized into the 292nd shooting division, after October fights North to the west of Stalingrad also was disbanded. One kavaleyriysky division (the 96th Kazakh natsionalny) in Ust Kamenogorsk, and two (Dzhambul the 105th and Akmolinsky the 106th Kazakh natsionalny) in a front strip were disbanded with transfer of a personal sostvo to other connections because tank cases and armies became again the main mobile force. The Dzhambul 81st kavdiviziya before disbandment managed to make a powerful contribution to an outcome of fights at Stalingrad: in attempts to seize the city of Kotelnikovo at the end of November — the beginning of December, 1942 it opened the creation beginning there enemy group for break to Paulyus's surrounded army. In total 12 Kazakhstan divisions which have remained to the end of war received the honourable names, five of them are marked out by one, four — two, and two — three awards everyone. Five divisions deserved a rank of the Guards: the 8th Guards shooting Rezhitsky Lenin's awards, Decorated with the Order of the Red Banner Suvorov's awards, of the Hero of the Soviet Union of major general I. V. Panfilov (former Almaty the 316th), the 27th Guards shooting Novobugsky Decorated with the Order of the Red Banner Bogdan Khmelnytsky's awards (former novokazalinsky the 75th sea, then the 3rd Guards shooting crew), the 30th Guards shooting Rizhsky Decorated with the Order of the Red Banner (former Semipalatinsk the 238th), 72-Guards shooting Krayenogradsky Decorated with the Order of the Red Banner (former akmolinsky the 29th), 73rd Guards shooting Stalingrad and Danube Decorated with the Order of the Red Banner (former Almaty the 38th) divisions. Special mission — to put the last point in war — dropped out to soldiers of the 150th strelkovoyidritsky Kutuzov's awards of the division created at the end of 1943 around Staraya Russa on the basis of the Kustanay 151st shooting crew. For successes in approach from Oder to Berlin, courage and courage of staff she received the honourable name "Berlin"; and its 756th shooting regiment which has set up the Banner of the Victory over a Reichstag — an award of the Red Banner. 15 soldiers of a division, including forem I.Ya.Sjyanov from Kustanai were awarded ranks of Heroes of the Soviet Union. Lieutenant R. Koshkarbayev who has set the first red flag in one of windows of a Reichstag, the assistant to the chief of reconnaissance department of a staff of a division captain B. V. Chupreta, the commander of a platoon second lieutenant K. A.Metov, a minometchik A.Bakhtygereev, the machine gunner P.E. Vitsko, operator K.M. Volochayev and hundred others became gentlemen of awards and medals of the USSR.

Active part was taken by Kazakhstan citizens and in elimination of the last center of war in the Far East. On August 9 the group of captain G. A.Golubev of the 52nd frontier group in short fight destroyed 20 and took prisoner of four Japanese soldiers on the bank of Argun, having opened a way for shooting divisions. Every other day the private of the 150th separate machine-gun battalion L.G. Kravchenko a body closed a pillbox embrasure at height "Forest", having provided its capture and having prevented death of companions. The commander of the 165th shooting regiment N. D. Kurmanov organized break of defense of Japanese at an initial boundary on the Southern Sakhalin that allowed to seize seven pillboxes and 198 earth-and-timber emplacements Haramitogsky fortified area. Thus the regiment surrounded and took prisoner an infantry regiment of the opponent in full makeup. To the commander of a company of submachine gunners from the 290th battalion of marines And. M Yarotsky, to the commander of a company of the 179th shooting shelf of the 79th shooting division to S.T.Yudin and pilot attack plane of the Pacific fleet of M E. The rank of the Hero of the Soviet Union was (posthumously) appropriated to Janko. The first of them were able I directed subordinates in landing operation to Seysin's Korean port, the second provided capture of several earth-and-timber emplacements and pillboxes of Japanese on the Southern Sakhalin, and the third bombs and gun fire sank transport, some averages and small vessels of the opponent in the port of Racine and when it was lined, sent the car to the building serving as a strong point of defense.

With capitulation of Japan the Great Patriotic War of the Soviet Union and the second world war ended. The mankind was rescued from danger of establishment of world supremacy of fascist and militaristic dictatorship.

The victory over the germano-italo-Japanese block of aggressors was reached by the price of huge efforts and victims of the people of an anti-fascist coalition. The biggest losses were suffered by the USSR — over 27 million people. About 410 thousand from them — Kazakhstan citizens. Lessons and conclusions from history of war have to be never forgotten. Years of heaviest of the soldier and greatest of victories have impact on all subsequent development of humanity.