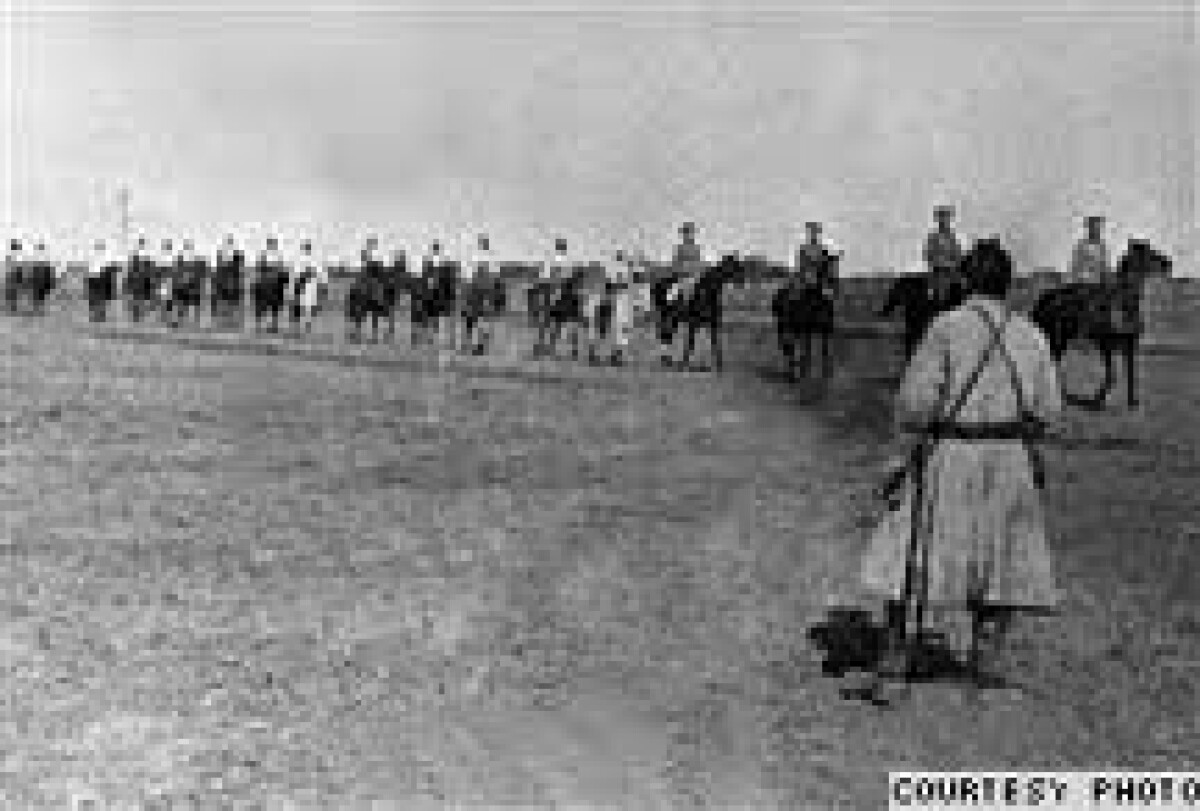 Speech of workers of edge has impact on growth of country approaches against tsarism, development of national liberation movement.

After defeat of the first Russian revolution in the country there came the reaction period. Demonstrations, meetings and meetings were forbidden, crushed Ural, Peter and Paul, Semipalatinkaya, Vernensky, Perovsky both other social democratic organizations and labor unions. Under the law of June 3, 1907 about dissolution of the II State Duma and introduction of a new election system, Kazakhs and other nationalities occupying edge, lost electoral rights. Police surveillance for employees, workers and peasants amplified. Owners of the industrial enterprises of Perovsk, Akmolinsk, Uralsk, crafts "Emba", "Dossor", etc. discharged from office "unreliable workers, brought in "black lists" of activists, organizers of performances, excitements of masses". At the enterprises performance standards, duration of the working day were increased, quotations are lowered, wide scope was received by penalties. Chernosotennye the organizations "Union of the Russian people", "Mikhail Arkhangela's Union", etc. arranged riots, kindled the race hatred.

For suppression of performances of peasants immigrants, Kazakh шаруа from garrisons Cossacks, groups of chasteners went. So, in April, 1909 by cable inquiry from Perm one hundred Cossacks was sent to Kustanai for suppression of discontent of the Kazakhs opposing resettlement policy of tsarism.

The aggravation of an agrarian question in the center of Russia tried to resolve the imperial government by colonization of the suburbs, including Kazakhstan, resettlement of peasants. Colonization of lands was accompanied by mass withdrawal at the Kazakh population a floor a type of "surplus" of the best fertile lands, including rendered habitable and mastered. Only in 1906 — 1912 over ten 17 million нземли were withdrawn.

Under the law of June 9, 1909 land management was made on two norms: the resettlement — on 15 and nomadic — on 12 дес. Representatives of the agrarian and democratic direction, acting on an agrarian question, propagandized transition of Kazakhs to settled life. As the imperial government sought to withdraw as much as possible lands from the Kazakh population, transition to a settled form of managing allowed them to keep convenient lands, especially Kazakh шаруа it was offered to receive the earth on resettlement norm with "the right of continuous integral possession of the earth".

Strengthening of national and colonial oppression, agrarian policy of tsarism, penetration of the capitalist relations into social and economic life of edge led to growth of national consciousness of the Kazakh people. National movement in the Kazakh society was non-uniform, there were the various ideological and political currents as which kernel acted the national intellectuals, graduates of universities and schools of Petersburg, Moscow, Kazan, Tomsk, Omsk and Orenburg. Opinion of various ideological and political currents of the national intellectuals the Aykap magazine and the Kazakh newspaper were most expressing.

The Aykap magazine, выходивцшй in 1911 — 1915 (the publisher and the editor — Mukhamedzhan Seralin (1871 — 1929), expressed the agrarian and democratic directions of ideological and political thought in Kazakhstan. In it cooperated Z.Seydalin, B. Karatayev, S. M. Toraygyrov, S. Seyfullin, B. Maylin, etc. On pages of the magazine problems of the agrarian relations, education and knowledge, development of the commodity-money relations in the Kazakh aul were covered, the colonizer policy of tsarism was exposed. The agrarian question, i.e. the land relations, subsidence of nomadic economy, questions of an agriculture, change of forms of managing, etc. was the main issue in the Aykap magazine.

The Kazakh newspaper leaving from 1913 to 1918, expressed ideas of the liberal and democratic direction. In it the leader of the Kazakh constitutional democratic party and national movement of the Kazakh people, the scientist-economist cooperated. Bukeykhanov, A.Baytursynov, M. Dulatov, etc. In the main thing, agrarian юпросе they made the requirement of cancellation of state ownership of the earth and its transfer to property to Kazakhs, a ban фодажи lands. Voblasti of development of political life sry the liberal and democratic direction stood up for evolutionary development of society. As a whole, despite different views about development of social and economic and political life of edge, the Aykap magazine and the Kazakh newspaper on the pages managed to express national ideas and interests of the Kazakh people in the conditions of the colonial suburb of the empire.

In 1910 — 1911 in connection with new economic recovery in Kazakhstan strike movement quickened. In May, 1911 workers-railroad workers of workshops of station Perovsk and Turkestan, miners on Atbasarsky Copper Ores joint-stock company mines striked. About 300 people who demanded increase in a salary participated in a strike.

On April 28, 1912 in Orenburg and on the line RSDRP city committee foklamation which called for a grazdnovaniye On the First of May extended, and also contained requirements of the 8-hour working day, political freedoms, dissolution of army and replacement with its national militia.

In the summer of 1912 on the Tashkent site of the Orenburg and Tashkent kelezny road there were also excitements of 300 workers of contractor Karakhnov driven to blank despair by six-months expectation of calculation.

On May 12, 1912 because of a low wage, severe conditions ore workers of Spassky copper-smelting plant went on strike. In ноне workers-builders of the Orenburg and Orsk kelezny road, Dossor's oil industry workers 1913 went on strike, in September there were excitements of workers on Chokparkulsky coal копях in the Turgaysky district. In the performances workers demanded improvement of an economic situation, the solution of social problems, made political demands which were important for development of political consciousness and determination to fight for the rights.

Speech of workers of edge has impact on growth of country approaches against tsarism, development of national liberation movement.

Peasants immigrants refused an apportion of taxes and yudaty, carried out unauthorized felling of the woods, many of them appeared without the allocated lands: hopelessness of situation, impoverishment of weight of peasants immigrants, strengthening of social-class stratification of the resettlement village became the reason of open introductions of peasants.

The agrarian and colonial policy of autocracy was opposed also by the Kazakh workers. Feudal байская a top, owning the most part of a livestock of cattle, a pasture, I exploited poor people more and more. Widely the bribery, extortion, briberies, etc. extended. Kazakh шаруа burned down winterings of fights, refused payment of taxes, attacked military teams.

The entry of Russia in world imperialistic war was hard reflected in position of workers of Kazakhstan: the sizes of taxes increased. "voluntary collecting", compulsory subscription to the state loan and the military tax, in total about 10 different types of collecting and duties were assigned to the Kazakh population.

Withdrawal of lands at the Kazakh population proceeded, for needs of war requisitioned clothes, cattle and food products, forcibly mobilized transport for transportation of military freights (mainly, bread) to railway stations. During war from Turkestani edge 300 thousand poods of meat, 70 thousand heads of horses, 13 thousand camels were taken out. Only from Semirechya in 1914 it was taken out cattle and cattle breeding products for the sum of 34 million rubles. Under the guise of the help to families of the mobilized the labor duty was entered, i.e. Kazakhs as labor had to plow, sow and harvest in the resettlement village.

The confidential instruction of the military governor of Semirechensky area obliged district chiefs to create on October 9, 1914 from "reliable Christians", from prosperous layers of the Russian village the armed groups against Muslim workers.

Fight for the land plots between propertied layers of the resettlement village and the working mass of the Kazakh aul amplified. Kazakh шаруа on oppressions of fists stole horses, destroyed boundary signs, burned hay and haying sites. Kazakh шаруа also suffered from the local feudal and patrimonial tops which for a high rent handed over them the lands belonging to an aul or a rural community. Persistently fighting against eviction from the lands, Kazakh шаруа didn't fulfill requirements neither imperial officials, nor the volost managers and aulny foremen, refusing payment of taxes, taxes, fund raising for needs of war.

From verbal and written protests workers of auls pass to active actions against proteges of tsarism. So, Kazakhs of the Nogay-Nurinsky volost of the Chernyaevsky district, having attacked the manager, the foreman, having taken away podatny documents, destroyed them, didn't allow them to execute official duties.

In the years of war performances of peasants immigrants, soldiers and women against high cost, officials, taxes and duties amplified. In March, 1915 in Vernensky, Lepsinsky and Przhevalsky districts of Semirechensky area the country people protested against policy of the prices of the imperial government according to which peasants immigrants had to sell agriculture products at the statutory price, and buy all necessary manufactory, haberdashery products at the speculative prices. In settlements Andreevsky, Osipovsky the Lepsinsky district, the Vernensky district of the woman crushed benches of merchants, sorted goods. Performance of women in Zaisan in 1916 was stopped by means of military force, 13 people were arrested.

In military units anti-war promotion was widely developed, recruits often evaded from a compulsory military service, soldiers refused to go on the front while to their families won't pay a grant. So, in 1914 of 300 soldiers in Kokchetav refused to go to the front while their families won't provide with the earth, farmstead sites and grants. Speech of soldiers was stopped by the armed force, and ten active participants are arrested and condemned on penal servitude for various terms.

In 1916 fermentation among soldiers of the local garrisons amplified, soldiers coming back from the front brought with themselves leaflets and leaflets, in increasing frequency hatred to war and tsarism openly expressed.

In the years of war position of workers in the cities, working at the industrial enterprises sharply worsened. In the very first days the imperial government in all areas of Kazakhstan entered "the extraordinary martial law" according to which meetings were forbidden, strikes, strikes, evasion from work, military censorship on correspondence etc. was entered. Police surveillance amplified. Businessmen acquired the right in a wartime to subject workers to arrest, and in case of unauthorized leaving to return them for work by means of police. Despite it, in the region the discontent grew in all segments of the population.

In June, 1915 Kazakh workers of ekibastuzsky and Karaganda copies, the Kyrgyz mining joint-stock company, the Spassky plant, opposing a low wage and severe conditions of work went on strike.