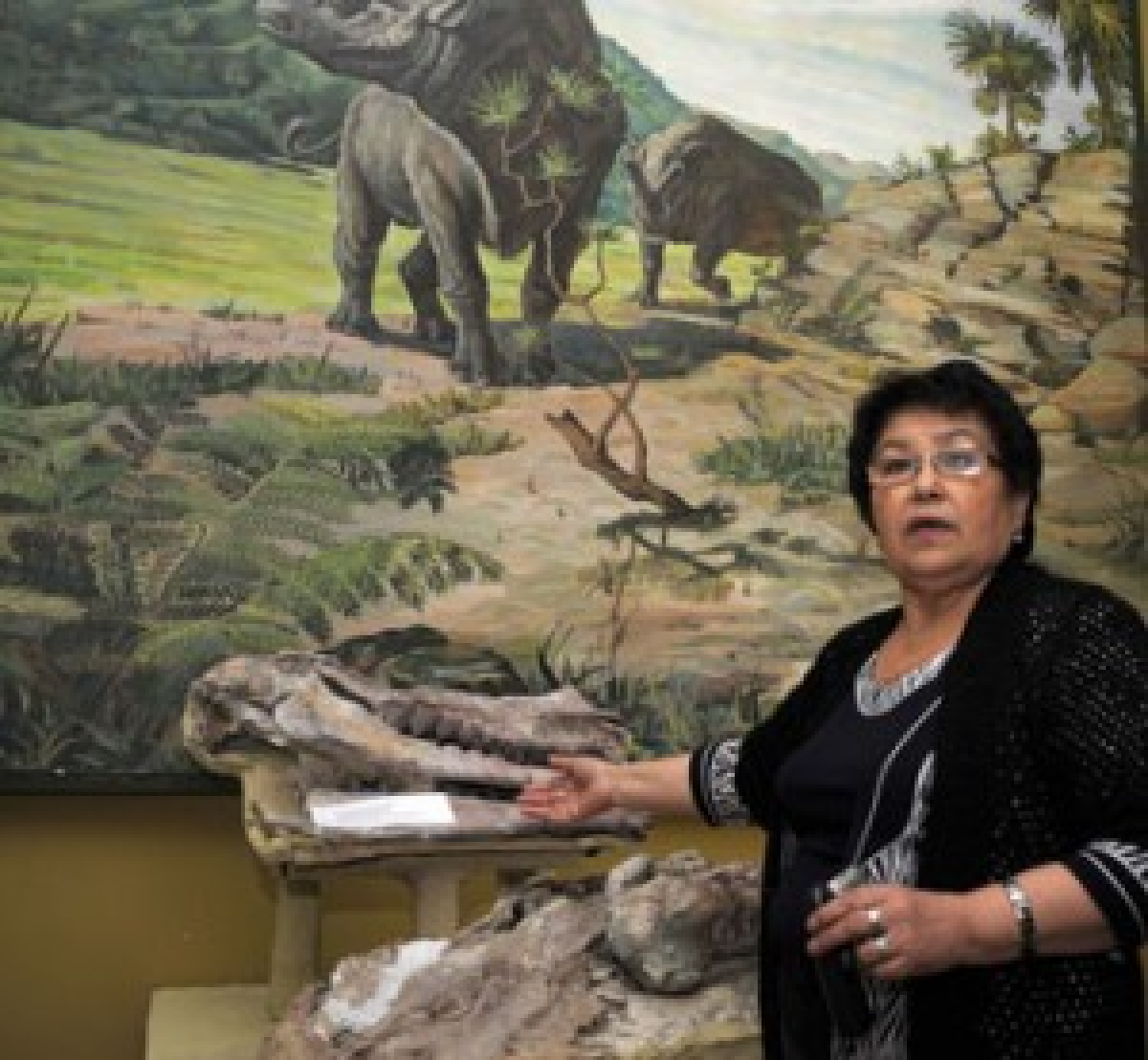 Paleontological Hall of the Museum of Nature is opened in the «Gylym Ordasy» («Гылым Ордасы») complex in the International Day of Museums.

Today in the International Day of Museums Paleontological Hall of the Museum of Nature is opened in the «Gylym Ordasy» complex.

The first thing which visitors and participants of the presentation will see is a huge skeleton of Tarbosaurus, a close congener of Tyrannosaurus Rex who was a carnivorous dinosaur and lived in Asia. The skeletal remains of Tyrannosaurus Rex were discovered in our republic, in the Central and other regions, in the 70-s of the last century. And last December in accordance with creative agreement with colleagues from the Paleontological Museum of the Russian Academy of Sciences the copy of Tarbosaurus graced the expositions of the Museum of Nature.

Standing under the predator, which occupies almost the entire hall, using a fantasy it is possible to pretend yourself a victim. And close to it there is another giant, but harmless, — herbivore rhino 8 meters long and 5 meters in height. This year the 100th anniversary of the discovery of this species is celebrated. It was exactly 1912 when Turgai expedition scientists found a lot of ancient remains, including the skeleton of a huge rhino roamed around these places approximately 32 million years ago (now this exhibit adorns the Paleontological Museum of the RAS). Later, beginning from the 50-s of the last century, it had been found many other skeletal materials that are exposed in the paleontological exposition our Museum of Nature.

Piruza Tleuberdina, the curator of antiquities, the Head of the Museum of Nature, famous paleontologist, not so long ago obtained the title of Academician of the American Biographical Institute, does not conceal her happiness.

— Opening of the hall, where more than half of the exhibits are completely new, is a great event for us, — says Piruza Ablayevna. — When in 2006 the building of the Academy of Sciences was closed for repairs and the museum «died», as I said at that time, we had to pack all the exhibits in boxes and put them away. But they have to work, and Kazakhstan people, especially youth, should learn the history of their region and the past of its wildlife with them! And now in the repaired building, we are again ready to receive pupils, students and other visitors, including foreign tourists, to introduce this national treasure.

Scientific staff of the museum has been working hard since 2010 with the aim to restore and reconstruct skeletons and fragments. Now about 500 exhibits are presented here, and in total the funds of the Institute of Zoology stores more than 100 thousand. Collection of Proboscidea which includes Kazakhstan species of ancient anankus, while the skulls of female and cub are close to each other, is a part of new expositions. The same collection contains impressive real monster — many-toothed Ishimy mastodon of Neogene period, the length of its tusk is more than four meters. Know-how was introduced to the exposition by the staff: dioramas with the landscapes of that era in which ancient animals lived are situated under each showcase. The fact that children will have an opportunity to hold some of the exhibits in their hands or stand up close to the femur of a giant rhinoceros and mastodon, to assess their size, or compare the skull of modern and ancient rhinoceros, is remarkable.

Owls and forest elephants, tigons and longicorn bisons also lived on the territory of modern Kazakhstan. It is possible to find a lot of interesting things in the new hall, including family of tapirs, lived 60 million years ago, ancient Suiformes Entelodons, strolling near the Chelkar lake in Torgai cavity 32 million years ago and a big pile of turtles killed in hibernation, found in 1998 in Semipalatinsk Irtysh, near salt Karabastuz lake. The skull and jaw of Brontotherium, a unique discovery of 1996, is also among them. Piruza Ablayevna remembers, it is interesting that at first artists painted this animal for the museum, and then a miracle happened as its remains were found in expedition near Aktau. 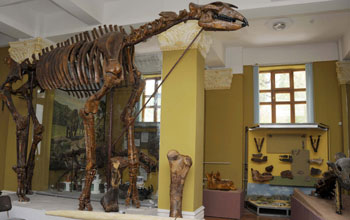 The basic scientific material was collected by scientists of the Institute of Zoology from 1948 till 2011. It revealed to the world that Kazakhstan thanks to its geographical location, vast territory and variety of landscapes was inhabited by different animals in prehistoric era.

— In 1959 our Museum started welcoming first visitors and step by step became famous far beyond the boundaries of the republic — Piruza Tleuberdina remembers. — Paleontological hobby group worked on the basis of the Museum and some of its pupils seriously were interested in science, specialists from museums of the Union republics passed here their internships, students of the Departments of Geography of various Institutions of higher education visited it annually in summer in accordance with their educational programme.

Since the skeleton of giant rhinoceros was found in 1912 Kazakhstan scientists were made dozens scientific discoveries, affirmed that our country is unique for paleontological researches. In total more than 1000 deposits of remains of skeleton parts of ancient vertebrates and plants were discovered in the republic. All these are national treasure and historical heritage, which should be kept and used to improve intellectual and cultural potential of the society as well as for development of tourism, — Piruza Ablayevna concludes.

The Year of the Dragon, according to the eastern calendar, Almaty residents and visitors could see various dragons that lived in these regions millions of years B. C. More than half-century history of the museum got the second wind, while all of us obtain an opportunity of an exciting journey to the ancient times.