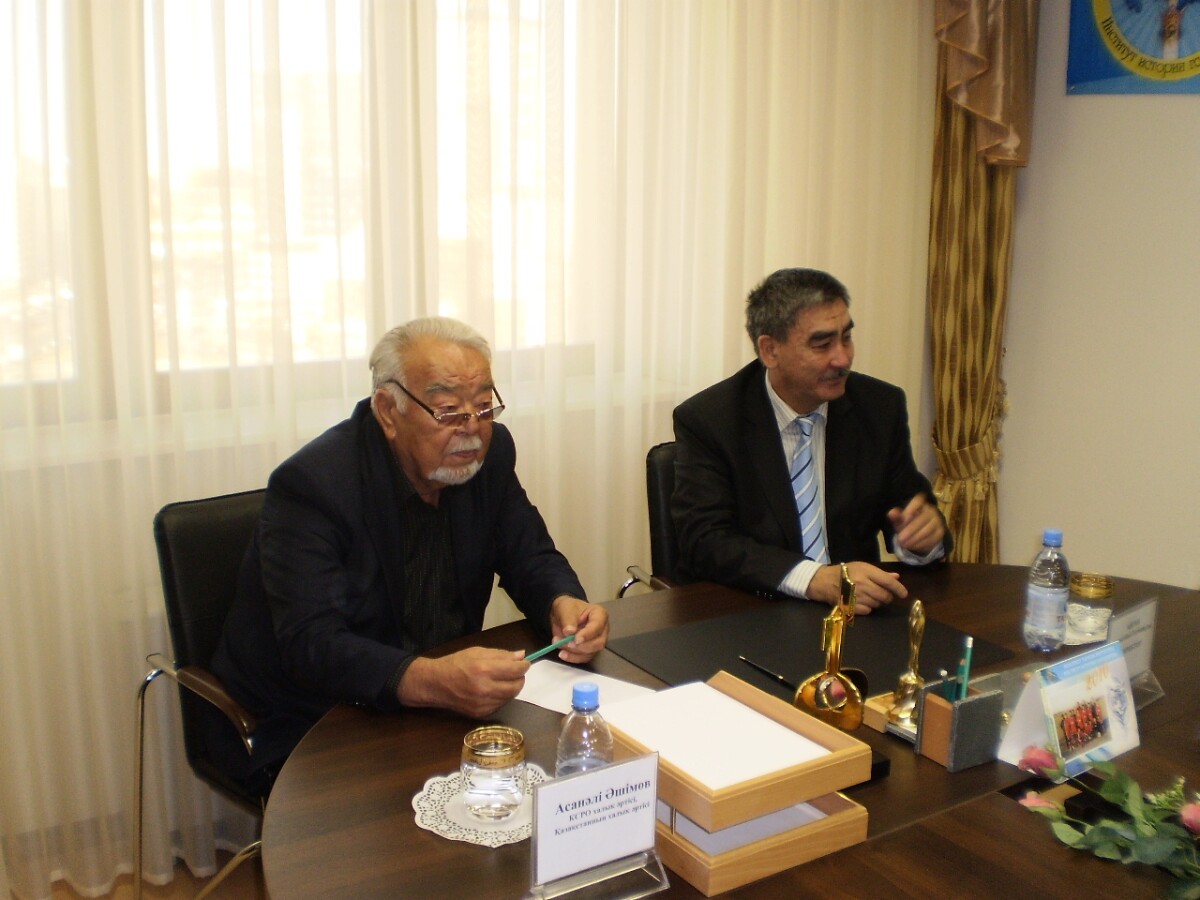 At the Institute of History of State held a meeting of scientists with famous Kazakhstani actor and director Asanali Ashimov. The director of the Institute, Ph.D. and Professor Burkitbay Ayagan said to Asanali about his team and its tasks, particularly emphasizing, that now historians work on realization of one scientific program, which dedicated to 20th anniversary of independent Kazakhstan.

A.Ashimov the master of Kazakh cinema and theater told about his work, plans and ideas. His debut in the film “Botagoz” (1958) based Sabit Mukanov’s novel, was while he had been study at Almaty Institute of Theatre and Art (AITA). He played the role Kenzhetay and his partner Gulfairus Ismailova was also a debutante, who later became known as a theater artist.

In 60s A. Ashimov played the role of traitor Bekezhan in the drama by Kazakh epos “Kyz Zhibek”. However, global fame for him brought the film “Konec Atamana” (“The End of Ataman”), filmed by famous director Shaken Aymanov. This film had great success. Only in 1972 it was viewed by 30 million people. The tape initiated trilogy about security officer Chadjarov, which became Asimov’s hallmark. In 1977 Eldor Urazbayev filmed the movie “Trans-Siberian Express”. In 1989, directors   I. Vovnyanko and Choi Gug filmed the last part of trilogy “Manchurian Variant” by his scenario. After 20 years, A. Ashimov initiated to revive this story. The director Kuat Akhmetov decided took a new film about the adventures of Kasymkhan “Kto vy, gospodin Ka? (“Whoareyou, Mr. Ka?”) (2010) withAsanaliAshimov.

A.Ashimov played only in three dozen of film as he was very busy at theater. He gradually started interested in the role of director. In 1981 he made his debut film "Year of the Dragon" in the historical novel Ziya Samadi (by Yuri Vizbora) about Uighur uprising in Xinjiang in 20th century. In 1984, A. Ashimov made the film “Legendary Shokan”, about famous Kazakh scholar and traveler Shokan Ualihanov. Then he made film “Wormwood” (1986), drama movie on the Kazakh epos “Kozy Korpesh and Bayan Sulu” (1992), “Dom u solenogo ozera” by Satimzhan Sanbayev (2004). Asanali Ashimov is People’s Artist of Kazakhstan and People’s Artist of USSR, winner of many awards and the order “Kurmet”.

Asanali as the elder of Kazakhstani cinema, giving the answer to the researchers’ questions said that an actor and scientist have many similarities. He emphasized that both of these professions are based on desire for knowledge to human beings, psychology and emotions. Burkitbay Ayagan, on behalf of his team gave him the books published by the Institute of History of State. Asanali in his turn wrote in the Visitors Book of Institute and presented his books with his signature.