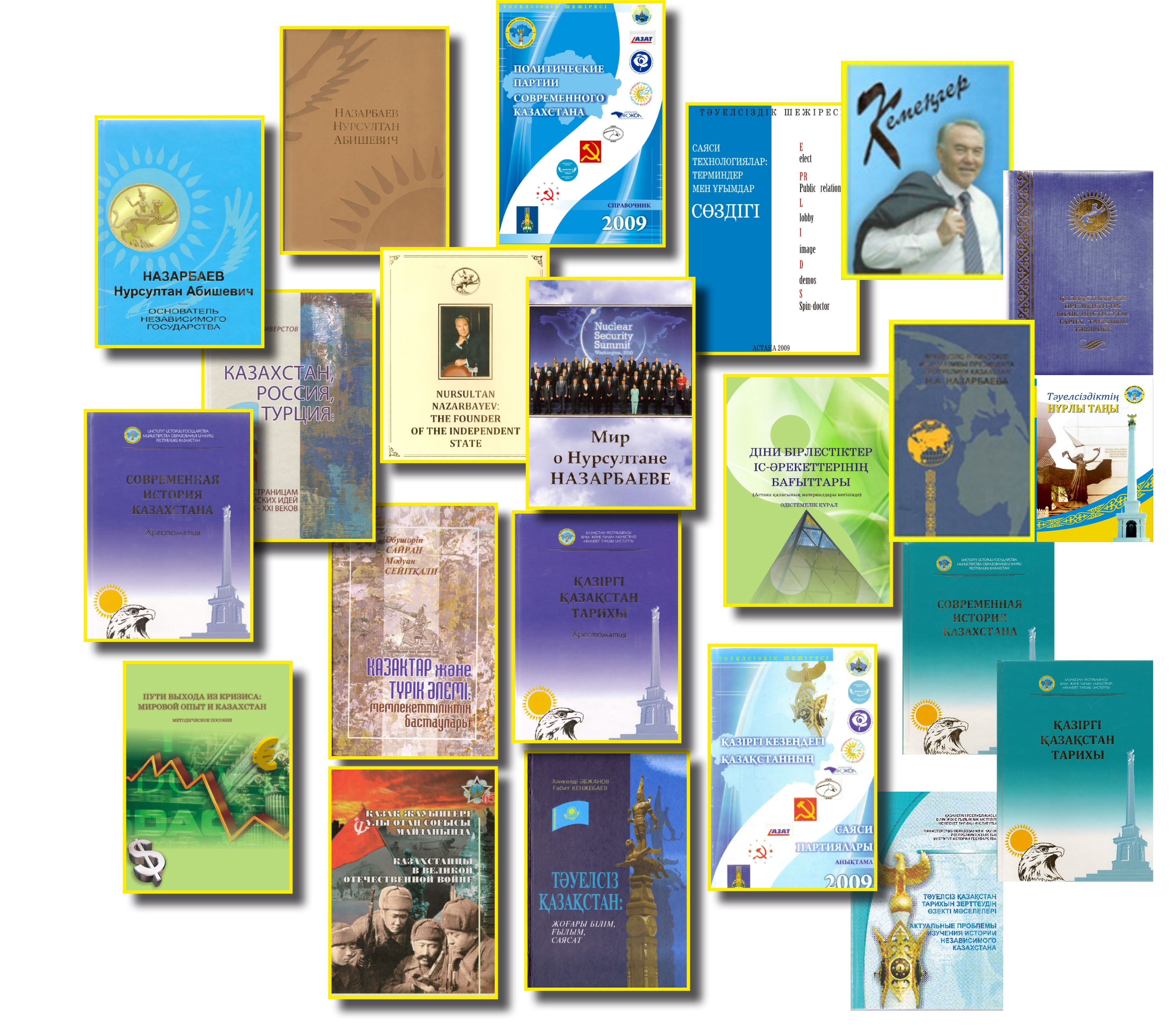 A series of books prepared by the scientists of the Institute of History of State MES was published. They are scientific, popular and socio-political publications such as "Nursultan Nazarbayev-founder of an independent state" in Kazakh, Russian and English languages, "The foreign policy initiatives of the President of the Republic of Kazakhstan Nursultan Nazarbayev", "Tauelsizdiktin nurly tany", "Kemenger" textbook "Modern History of Kazakhstan" and the reader on contemporary history of Kazakhstan in the Kazakh and Russian languages. All of these publications without reservations can apply terms such as "best, new, first time". The main theme, which goes as leitmotif in every book - Kazakhstan's independence, the role of the President - Nursultan Nazarbayev as the Leader of the Nation in the construction of a sovereign state.

Institute of History of State held presentation of new books in Astana. Members of Parliament, social scientists from near and far abroad, government representatives, prominent public figures, heads and teachers of higher educational establishments were in the presentation.

Director of the Institute of History of the State, doctor of historical sciences, professor Burkitbay Ayagan presented gathered new editions. The book "Nursultan Nazarbayev - the founder of an independent state”, represents career of the President, the leader of a world scale. Readers after learning the book had an excellent opportunity personally appreciate the multifaceted work done by the people of Kazakhstan headed by the President on the construction of an independent state. Many documents, photographs relating to the life and work of Nursultan Nazarbayev, were published for the first time. When we talk about Nursultan Nazarbayev, as the founder of modern Kazakhstan, we mean, of course, the construction of a secular, democratic, multi-ethnic state with a market economy and a peaceful foreign policy.

Interest in the personality of Nursultan Nazarbayev, as the President and a person who has a great reputation and respect in the world, is huge. Thus, it seems that the book "Kemenger" will raise great and a genuine interest. There were not such publications in our country. The book contains statements, estimates, wishes, opinions of the heads of state, prominent politicians and public figures of the world, concerning the activities of the President of Kazakhstan Nursultan Nazarbayev. The book is recommended a wide range of readers.

The book "Tauelsizdiktin nurly tany" is designed to educate young people in a spirit of devotion to the motherland, love for the Fatherland, to form a sense of patriotism in young people. It contained more than 300 original poetry works of Kazakh masters devoted to Kazakhstan, the country's independence, Astana and President N. Nazarbayev. This book can be used in seminars on culture, history and Kazakh literature.

Textbook "Modern History of Kazakhstan", which was published in the Kazakh and Russian languages, devoted to topical issues of Kazakhstan's history from ancient times to the present day.

The issues on state-political development, the main aspects of state strategy, features of the development of modern Kazakh society and the main directions of the foreign policy of the Kazakhstan, were considered from the different angle. The textbook is designed for undergraduate students of non-historical specialties of universities of the country.

New and non-conventional approaches used by scientists of the Institute of History of State in the preparation of chrestomathy of modern history of the state in the Kazakh and Russian languages. It includes previously unpublished official government documents, materials periodicals and archival documents. The chrestomathy is designed for students, graduates, job seekers, as well as for all readers interested in the history of independent Kazakhstan. Historical and documentary material presented in the anthology covers all the most important stages in the history of modern Kazakhstan.

Moreover, the Institute of History of State for the publication of books held several meetings with representatives of domestic and foreign scientific communities where new editions were presented by the scientists. The researchers of the Institute received many positive feedbacks, particularly, from the professor of Columbia University Rafis Abazova, rector of Tomsk State University, Professor George Mayer and others. Today, researchers work on new themes devoted to the Kazakhstan’s independence and in the near future they will be embodied in books and monographs.