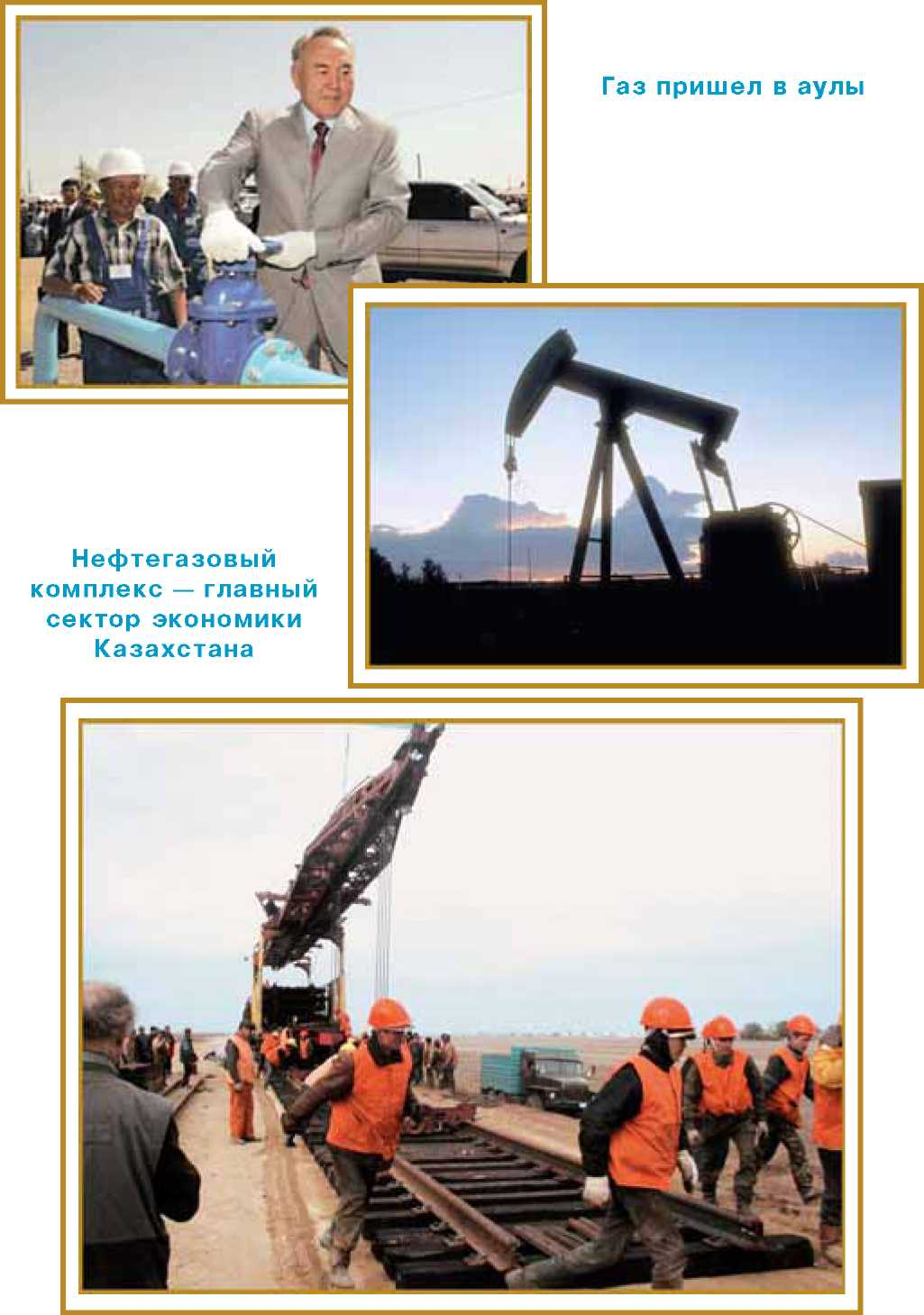 The present book represents the arch of events and the facts made in chronological sequence that allows to carry it to a genre of historical chronicles.

History — the witness to time, light of truth, memory life, the teacher of life, the messenger of old times.

The book presented to attention of the reader is devoted to one of the significant periods in the history of independent Kazakhstan. If the 90th years of the XX century are characterized in the history of the country as the period of formation, revival of bases of statehood, time of overcoming of the system crisis caused by crash of communism, a rupture of once uniform economic and military complex, the period considered in the edition became history as the period of consolidation of earlier won positions, a stage of definition of long-term priorities in state development. Sometimes it is easier to climb up top, than to keep on it — this vital axiom found more than once the reflection in the history that is fully actual and for Kazakhstan.

The present book represents the arch of events and the facts made in chronological sequence that allows to carry it to a genre of historical chronicles. Istochnikovy base of research publications of republican and regional newspapers made, messages of news agencies, the official chronicle, data from encyclopedias and monographs, materials of official sites of government bodies of RK, are given extensive statistical data.

Much attention is paid by originators to methodology. So, the important place during preparation of the edition is taken by use, along with traditional methods and approaches in historical science so-called "a daily occurrence method", very popular in the western scientific community. Its essence that daily occurrence history — history of those who isn't visible in big history, people who are actively included in historical process as ordinary participants.

Authors originators, without seeking for creation of the comprehensive historical chronicle applying for full, conceptual judgment of a political and economic situation in the country, pursued the aim as it is possible to reflect more stoutly all range, all palette of the political and economic and welfare processes happening in the Republic of Kazakhstan.

The considered period is noted by rapid development of national economy, search of the new perspective directions in economy and the institutional transformations directed on increase of efficiency of economic development, completion of painful and difficult structural and institutional reforms of the 1990th years.

Became obvious that the key problem of the first decade of the independence, consisting in a basic change of the economic relations, as a whole was reached. So, on the gross domestic product level per capita Kazakhstan came to the second place in the CIS after Russia and entered into group of leaders practically on all socio-economic indexes. Everywhere in the republic are put into operation of one hundred plants and hi-tech productions, a large number of factories and shops opens. Within development of transit potential and transport infrastructure of the republic thousands kilometers automobile and the railroads are constructed. Are put in operation main oil and gas pipelines, the high voltage line, objects of power.

The noticeable impulse to development and restoration of rural economy was given by the Years of the aul which have passed in 2003 — 2005. The important place in the course of overcoming of a raw orientation and diversification of economy was occupied by Strategy of industrial and innovative development for 2003 — 2015. Increase in production happened in all branches of economy, rates of the inflation were slowed down, steady there was a rate of tenge, country gold and foreign exchange reserves considerably increased.

The successes reached in economy allowed the state to pursue more socially focused policy. The new system of the compensation which has affected, first of all, workers of the budgetary sphere was entered. In 2002 the Law "About the State Address Social Help" which analogs among CIS countries didn't exist was enacted. Kazakhstan became the leader of the CIS in rendering the social help to children, the unemployed, disabled people, pensioners, students and the people living below the poverty line. Compensation of deposits of citizens of Kazakhstan in Sberbank of the USSR, lost as a result of inflation became an unprecedented action of the state. Thanks to new economic opportunities in a state policy the special emphasis on health care, science and education which make the capacity of any country is placed.

Political life of the country of a considered piece of independence is noted by change of two governments. In January, 2002 cabinet resignation under the leadership of K.K.Tokayev, caused by governmental crisis of fall of 2001 took place. Before I.N.Tasmagambetova's government the whole complex of tasks of the social and economic block actual for the state with which it as a whole successfully coped was put.

Statement of new strategic tasks and need of their effective decision naturally caused expediency of change of the Government and formation of its new structure headed by Prime minister D. K.Ahmetov which candidate the President of RK N.A.Nazarbayev presented at joint meeting of chambers of Parliament in June, 2003.

During this period as priorities in reforming of political system of the country were designated improvement of an electoral system; modernization of system of public administration on the basis of decentralization and competence differentiation between levels of public administration, and also expansion of practice of selectivity of heads of local executive bodies of the power; strengthening of institutes of civil society; expansion of freedom of mass media at simultaneous increase of their responsibility; humanization of activity of law enforcement and judicial authorities.

The elections which have taken place on September 19, 2004 in Mazhilis of Parliament of RK became a key political event of year. On their results of RPP "Otan" I received 67,5% of votes, the block of Civil and Agrarian AIST parties — 18,2%, "Asar" — 5,2%, "Joint stock company жол" — 2,6%, Democratic party of Kazakhstan — 1,3%, independent candidates — 5,2%. The Otan party received party status of the parliamentary majority that caused a new level of responsibility in its activity.

Election of the president of RK in December, 2005 was the central event of the considered period in republic life. N.A.Nazarbayev with overwhelming support of the population (91,15% of voices) surely won elections. The people of Kazakhstan showed full support of a conducted course of development of the country directed on improvement of life of a general population, sovereignty strengthening, society modernization.

It is possible to refer celebration of the 50 anniversary of development of a virgin soil, the 60 anniversary of the Victory, opening of the new residence of the president of RK to other significant events of the period of political life of the country — Akorda, etc.

Estimating results of the country in foreign policy aspect, it is necessary to notice that priorities of foreign policy of Kazakhstan during the studied period were reduced to two main directions.

The first direction was aimed at maintenance and strengthening of friendly communications and development of multivector cooperation with foreign countries on a mutually advantageous basis. Importance of the second direction is caused by complication of an international situation, strengthening of activity of the international terrorism and extremism. Counteraction to new threats and calls of the present demanded adequate measures for ensuring regional security and filling by concrete contents of earlier made contracts and agreements. The organic combination of these tendencies, their interdependence also defined relationship of our state with the world community, having traditionally friendly and peaceful character.

Moreover, such large international initiatives of Kazakhstan as convocation of Meeting on interaction and trust measures in Asia, carrying out the first Congress of leaders of world and traditional religions, the Euroasian economic summit under the auspices of the Davos forum, an annual Euroasian media forum strengthened his authority on the world scene and put a basis for its new geopolitical positioning.

Completion of process of delimitation of the borders which result was creation by Kazakhstan on perimeter of the borders reliable "stability belts" became the main foreign policy result of the period.

The special place in foreign policy of the republic was taken by questions of deepening of integration of the CIS, definition of the right status of the Caspian Sea, development of long-term cooperation with strategic partners — the Russian Federation, the People's Republic of China, the Central Asian republics.

As a whole it is possible to call the considered period surely successful for social and economic development of Kazakhstan that became possible, thanks to a phasing and an accurate splanirovannost of process of reforming. Kazakhstan considerably promoted in modernization of political system, preservation and consolidation of interfaith and international stability.

The group of authors hopes that the presented work will be useful as to professional historians and other experts, and to the creative reader who is interested in a current state and problems of development of the country.

Use of materials for publication, commercial use, or distribution requires written or oral permission from the Board of Editors or the author. Hyperlink to Qazaqstan tarihy portal is necessary. All rights reserved by the Law RK “On author’s rights and related rights”. To request authorization email to mail@e-history.kz or call to (7172) 79 82 06 (ext.111)
Қазақша Русский English
MOST READ
Month Year
Burial mounds of the southwestern part of the Semirechye region
Union of the Archives and Library
The referendum on the Constitution is a significant stage of democratization
Heroic mothers of the great steppe
Philosophy of the Emblem
14 monuments at Tekturmas
The rural akims: the country's hope is in the elections
Kazakh historical drama Tomiris premiered in Istanbul
Stolypin about the worries and hopes of immigrants to the Kazakh steppes
ALASH IDEA IS THE PROTECTION OF KAZAKH STATEHOOD
A tireless explorer of the Kazakh land
SWITCHING TO THE LATIN ALPHABET – UNITE ALL KAZAKH PEOPLE
Kunaev Dinmukhamed Akhmedovich
People who eat horses will kill you
Kazakhstan's participation in the Winter Olympics has a long history
Materials on theme
Independent Kazakhstan: Day after day. Chronicle of events (2006-2011)
Release of new books
Independent Kazakhstan: Day after day. Сhronicle of events (1990-1995)
Independent Kazakhstan: Day after day. Chronicle of events (1996-2000) 2 volume.