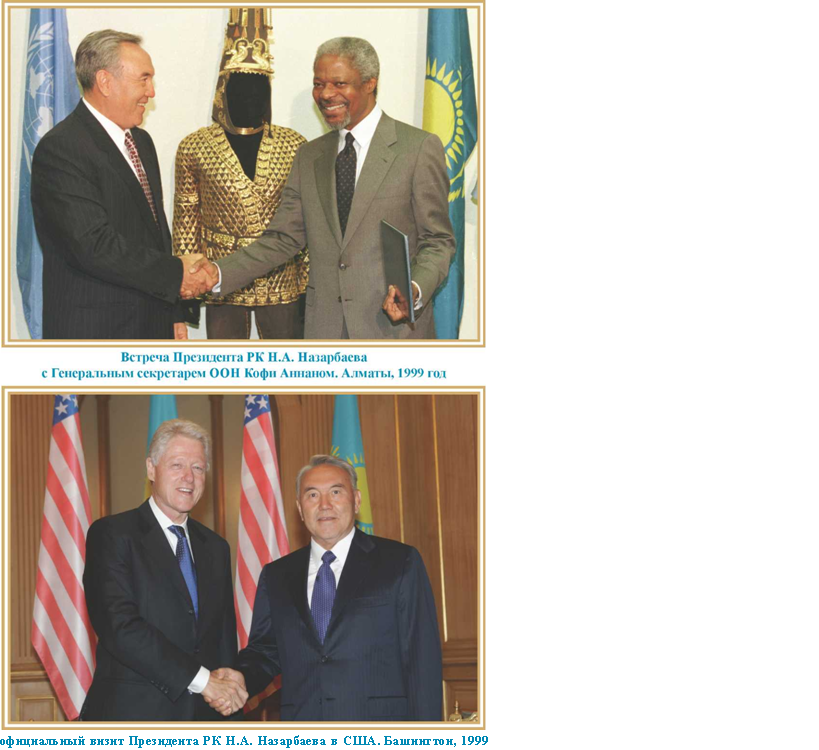 The main goal of this edition — to show dynamics of development of all spheres of activity of society during the period from 1996 to 2000.

On a threshold of the 20 anniversary of independence of Kazakhstan we look back back in order that dared to go forward, to the future and know that is necessary for achievement of our common goal — prosperity and welfare of the people of Kazakhstan.

The main goal of this edition — to show dynamics of development of all spheres of activity of society during the period from 1996 to 2000. At material selection the special attention was paid to periodicals, as in them отражались views and opinions of representatives (layers) different a level on occurring processes. In the edition the regional aspect that gives the chance to look at last events more objectively is traced.

Originators tried to systematize the concrete facts of political, economic, social development according to the historical importance, using historical methods at classification of a certain event. In order to avoid mistakes and different interpretations which sometimes meet in different editions, materials of the periodical press, collections of documents, encyclopedias, the official chronicle and Internet sites were used.

The difficult economic situation of the second half of the 1990th negatively influenced social life of society. The salary wasn't paid, the big delay of pensions and grants proceeded. Many enterprises, not managed to survive without state grants, appeared bankrupts. The number of the unemployed grew. Gradually villages died, collective farms were closed. Privatization of objects of the state property began. It became the reason of social tension in society. This period is characterized by miners' strikes of Kentau, Zhanatas, Karaganda, electricians of Ekibastuz, meetings of pensioners, physicians, teachers. For stabilization of a social and economic situation in the country active attraction of investments from abroad began. For this purpose in 1998 the Head of state created Council of foreign investors for ensuring direct dialogue with the investors working in Kazakhstan, and also the operational solution of the problem questions connected with investment activity.

At the same time in the republic reforming of the political sphere proceeded.

1996 was marked by final formation of the Kazakhstan parliamentarism — the first session of Parliament on January 30 opened. The new Parliament shared on the parliament Senate (upper house) and parliament Mazhilis (lower house).

The strategy published in October, 1997 "Kazakhstan — 2030. Prosperity, safety and improvement of welfare of all Kazakhstan citizens" was a further theoretical platform of the reforms developed in the country. The monetization of social benefits, reform of pension system, housing and communal services, education, health care were carried out. All this promoted overcoming of so-called Asian financial crisis by Kazakhstan.

Since 1998 the Government started development and implementation of strategic plans. On the basis of Strategy Strategy of industrial and innovative development of the country, the State agrofood programme, Programs of a development of education and health care, the State program "Cultural heritage", reforming of system of social protection of the population, housing construction, etc. were accepted.

On a threshold of the new millennium economic and political stabilization was outlined in the republic. New plants and factories opened, the number of the unemployed decreased, many regions of the republic passed to an unsubsidized mode. All debts to workers and pensioners from the Government were extinguished. The state started carrying out support of subjects of small business. The infrastructure of the cities came to life, plants earlier recognized as bankrupts and factories started giving the first production.

In the foreign policy sphere the Agreement signed in 1997 on mutual reduction of armed forces around the border, concluded between Kazakhstan, Russia, Kyrgyzstan, Tajikistan, on the one hand, and China — with another, became big break in the decision of "a boundary question" former federal republics and China. And, as a result, successful development of the interstate relations, strengthening of mutual trust between the participating states of this process.

The constitutive treaty of the Euroasian economic community signed in 2000 in Astana by presidents of Belarus, Kazakhstan, Kyrgyzstan, Russia and Tajikistan, lifted trade and economic cooperation of the above states on new level.

This period is characterized by intensity of visits of the Head of state to CIS countries and the European states that affected strengthening of positions of Kazakhstan on the international scene.

Thus, the period from 1996 to 2000 became the major stage in development of independent Kazakhstan. By this time of reform gained irreversible character, and there were concrete results of carried-out transformations. At a turn of XX and XXI centuries Kazakhstan took a worthy place in the world community, its role increased in multilateral structures of regional and world level. Above-mentioned events, the facts are given in chronicles and are logical manifestation of process of reforming.

Originators express gratitude to reviewers, library workers of the Presidential center of culture and everything who rendered assistance in preparation of the book to the edition.

Use of materials for publication, commercial use, or distribution requires written or oral permission from the Board of Editors or the author. Hyperlink to Qazaqstan tarihy portal is necessary. All rights reserved by the Law RK “On author’s rights and related rights”. To request authorization email to mail@e-history.kz or call to (7172) 79 82 06 (ext.111)
Қазақша Русский English
MOST READ
Month Year
Burial mounds of the southwestern part of the Semirechye region
Union of the Archives and Library
The referendum on the Constitution is a significant stage of democratization
Heroic mothers of the great steppe
Philosophy of the Emblem
14 monuments at Tekturmas
The rural akims: the country's hope is in the elections
Kazakh historical drama Tomiris premiered in Istanbul
Stolypin about the worries and hopes of immigrants to the Kazakh steppes
ALASH IDEA IS THE PROTECTION OF KAZAKH STATEHOOD
A tireless explorer of the Kazakh land
SWITCHING TO THE LATIN ALPHABET – UNITE ALL KAZAKH PEOPLE
Kunaev Dinmukhamed Akhmedovich
People who eat horses will kill you
Kazakhstan's participation in the Winter Olympics has a long history
Materials on theme
Independent Kazakhstan: Day after day. Сhronicle of events (1990-1995)
Independent Kazakhstan: Day after day. Chronicle of events (2006-2011)
Release of new books
Independent Kazakhstan: Day after day. Chronicle of events (2001-2005)