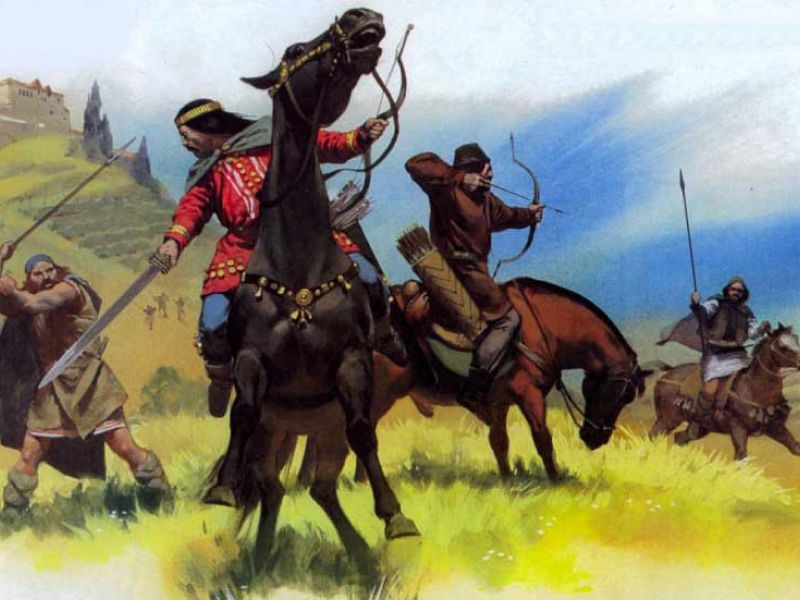 He was the founder of the Persian tribes  - king CyrusII, who in 550 BC defeated and subdued the Medes and created a huge country that included the regions of Central and South Asia. In the Achaemenid State ( in the interval between 530 and 522 years. BC. E . ) Consisted of Parthia , Khorezm, Bactria, Sogdiana , Saka , and the people who were on the territory of Central Asia and Kazakhstan , were conquered by the Achaemenids , or subordinate to them .

To North from Bactrian , Sogdians and Khorezm , in the steppes of Kazakhstan , according to ancient sources, inhabited by nomadic "tours with fast horses." Tours in the Persian sources referred Saks , which means " mighty men ", and in the writings of Greek authors appear under the name of Scythians , which came into use extensively as a synonym for the nomads.

The Roman scholar I c. n . e . Pliny the Elder wrote : "On the other side of the Jaxartes ( the ancient name of the Syr Darya ) live Scythian tribes . The Persians generally called them Sakas ... Number of Scythian peoples indefinitely ... Celebrities including Saks , Massagets dai , issedonov ... arimasps . "

Saki, judging by the extant descriptions, were pastoralists , were breeding horses, cattle, sheep and cattle were splendid horsemen and archers .

Under the name of the Scythians and Saks Greeks and Persians meant , most likely, many associations related tribes . The most numerous of them was a union Massagetae , which Herodotus ( wrote: " The people of this is the numerous and warlike , lives in the east on the other side of the river Arax (apparently, the Syr Darya ) against issedonov ... For clothing and lifestyle massagets like the Scythians. they fought on horseback and on foot . Know both methods of war , fighting with bows and spears , and usually armed with axes. All items out of their gold and copper ... they do not sow , feeding pets and fish, which delivers them in abundance Arax river . They drink milk . "

Other authors mention the fact that "for the Sughd, the river Jaxartes ( Syr ) lived Saks."

In the Persian cuneiform inscriptions refers to three groups of Sakas : paradarayya (Overseas Saks ) , Saks - haomavarga ( Saks , beverage manufacturing haomu ) , Saks - tigrahauda ( wearing pointed hats ) . Where these tribes are located , it is difficult to say , because the precise scientific geographical references ancient writers have left . According to some researchers , saki paradarayya settled in the Aral Sea , the lower reaches of the Syr Darya and Amu Darya , "or in the Northern Black Sea ; saki tigrahauda - in the middle Syr Darya and the Tien Shan ; saki haomavarga - in the valley of the Murghab . According to K. Akishev , Saks tigrahauda Iranian - written sources correspond to the Scythians ortokaribantii because both words mean " Saks in pointed hats ." In addition, Saks depicted on bas-reliefs from the palace of Xerxes at Persepolis have Mongoloid features and are tall pointed hat, most likely, scientists believe, is saki tigrahauda . And as one of the centers of the Mongoloid could be Seven Rivers area , he concludes that the saki tigrahauda lived in the Seven Rivers . This assumption is confirmed by the fact that buried in a mound of Issyk Saka king wore a tall pointed hat. According to the researcher , in the tribal union of Saks were also aksatagi , Arist and possibly argippei .

M.K. Kadyrbaev thought aorsy - savromatskih one of the tribes living in the Southern Urals . Lived north of the boudins , the land which is' covered with thick forest of different breeds , "and further north - and fissagety yrki , engaged in hunting . Argippei living " at the foot of high mountains ", most likely placed in the south- eastern Urals . Saka tribes Arimaspi and " guarding the gold vultures ", located perhaps in the Altai , where the gold mines .

Issedonov M.K. Kadyrbaev puts in the vast Central Kazakhstan. Final decision about where different tribes lived Saks, depends on research of archaeologists , for only by archaeological sites can reveal differences in material culture .