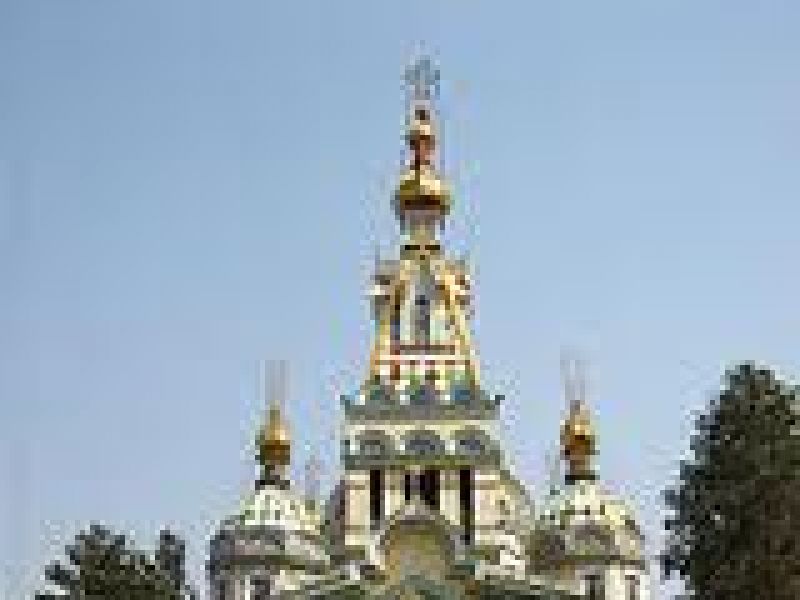 Orthodoxy in Kazakhstan is the second for the number of believers after Islam the religious direction.

Emergence of Orthodoxy in our country is connected with the military settlements which have arisen owing to accession of Kazakhstan to Russia. In the south the first military причты (small churches, houses of worship) appear in 1866 in Turkestan and Shymkent. In 1871 the Turkestani diocese was formed. In 1872 the first of the Kazakhstan bishops was appointed to chair of the created Vernensky and Semirechensky diocese – the archbishop of Sofony (Sokolsky) who operated a diocese for 1877.

Construction of churches in the southern part of Kazakhstan began in the 80th of the XIX century. So, in 1901 in Syr-Darya area there were eight stone temples, constructed of the burned brick. By the beginning of the XX century 391 thousand orthodox Christians lived in Turkestan (which structure included also many lands of Kazakhstan) and 306 churches worked.

Establishment of the Soviet power in 1917 led to the beginning of the large-scale atheistic campaign, proceeding seven decades. This campaign was accompanied by destruction of temples, clergy prosecution, confiscation of property of church. In the 1920-1930th many priests were shot or sentenced to long imprisonment terms.

In the 30th of the XX century Kazakhstan became a place of the link of clergy and laymen of Russian Orthodox Church. This period coincided with the beginning of process of collectivization as a result of which the nomadic life of Kazakhs was destroyed, the Kazakh auls and country farms of the Russian immigrants that turned back unprecedented for all history of edge the hunger million people became which victims were ruined.

Certain eases concerning religion began in days of the Great Patriotic War when the Russian Orthodox Church supported patriotic spirit of the Soviet people in fight against fascist aggressors. In Kazakhstan began to open temples again.

Restoration of orthodox life in our republic began since 1945 when the Almaty and Kazakhstan diocese was founded, metropolitan Nikolay (Mogilyov), nowadays canonized was the first which ruling bishop.

In heavy military and post-war years Kazakhstan continued to accept exiled of priests, many of which found a shelter at locals, including Muslims. So, living in exile in the Aktyubinsk area, at deaf railway station Chelkar, Nikolay's svyashchennoispovednik, in the future become the metropolitan Almaty and Kazakhstan, rescued from death the simple Tatar Muslim. In the fall of 1942 it picked up it, half-dead, lying without memory on the road, brought to hospital, and then sheltered in the house.

As well the metropolitan Almaty and Kazakhstan Joseph (Chernov), being from 1954 to 1956 in exile in Kokshetau, it was accepted in a large Muslim Kazakh family where lived as dear member of this family.

However the state policy as a whole kept the atheistic character. Religious activity was rigidly supervised by the power.

Original revival of religious life including orthodox church, began after finding of independence by Kazakhstan. That Islam and Orthodoxy became important pillars of spirituality of our country, President Nursultan Nazarbayev repeatedly spoke. So, visiting on January 7, 2012. Sacred Uspensky a cathedral in Astana, the Head of state noticed: "As the bird can't fly with one wing, and the state can't move with one wing. Both wings – Islam and Orthodoxy – the main religious faiths in our country. All of us are people, uniform on this earth, but we different, on language, on appearance, on religion. But the great patience always is a basis for peace life".

Recognition of a freedom of worship allowed believers to return to full-blooded spiritual life. If in 1956 in Kazakhstan only 55 arrivals of the Russian Orthodox Church (ROC) functioned, for the beginning of 1999 212 arrivals and 8 monasteries acted on the territory of the republic. For the last decade further growth is noted.

Also in Kazakhstan orthodox monasteries work. Practically at all churches and houses of worship parish schools on studying of bases of Orthodoxy are open, Sunday schools at which are trained both children, and adults work.

In 1995 the state transferred churches the Voznesensky cathedral to Almaty constructed at the beginning of the XX century and recognized as a unique monument of architecture. Temples and in other cities are returned to orthodox communities. Now a lot of work on restoration of old cult buildings and construction of new churches and houses of worship is carried out.

Kazakhstan brought the contribution in restoration of the Cathedral of Christ the Saviour in Moscow. The granite direction from the Kordaysky field intended for finishing of walls of the temple became gratuitous gift of our country.

Patriarch of Moscow and all Russia Alex II (heading Russian Orthodox Church in 1990-2008) in July, 1995 made visit to Kazakhstan, having visited Almaty and Karaganda. In Karaganda it consecrated Sacred Vvedensky the cathedral which has become one of largest and most beautiful in Central Asia.

Are in recent years constructed the Cathedral of Christ the Saviour to Almaty, the Blagoveshchensk cathedral in Pavlodar, the Serafimo-Iversky cathedral in Ekibastuz, the Ioanno-Bogoslovsky cathedral in Taldykorgan, the Constantino-Eleninsky temple in Kostanaye, Sacred Nikolsky the temple in Satpayev and many other temples across all Kazakhstan. In 2009 cathedral Sacred Uspensky a cathedral in Astana is constructed. Some monasteries are also opened.

In June, 2005 in Astana the festive events devoted to 150-year anniversary from the date of opening and consecration of the Constantino-Eleninsky cathedral were held.

In January, 2010 Kazakhstan was visited by Patriarch of Moscow and all Russia Kirill. The head of Russian Orthodox Church visited Almaty and Astana, met representatives of the public, held church services in temples. Consecration of cathedral Sacred Uspenskogo of a cathedral in the capital of Kazakhstan became the main event of visit.

The number of officially recognized holidays in Kazakhstan included an orthodox holiday of Christmas (on January 7). This day is in the republic day off.

In recent years structural reform of Orthodoxy in our country is carried out. In May, 2003. The sacred synod of Russian Orthodox Church made the decision on creation in the Republic of Kazakhstan of the Metropolitan district as a part of Astanaysky, Ural and Shymkent dioceses. The metropolitan district is a special form of association of the dioceses, existing within Russian Orthodox Church only in Kazakhstan. The district was created for coordination of religious and educational, publishing, social and other socially significant activity of dioceses in the territory of the Republic of Kazakhstan. In 2003-2010 the district was headed by metropolitan Mefodiy (Nemtsov). In 2010 the metropolitan Astanaysky and Kazakhstan Alexander (Mogilyov) is appointed the head of the district.

In recent years there is a reforming of structure of Orthodox church of Kazakhstan. Till October, 2010. The metropolitan district included three dioceses with the centers in Astana, Chimkent and Uralsk. In 2010-2011 the decision of the Sacred synod of Russian Orthodox Church created six new dioceses with the centers in to Karaganda, Kostanaye, Pavlodar, Kokshetau, Petropavlovsk and Ust Kamenogorsk.

– Astanaysky and Almaty diocese, with the center in Astana, including arrivals of the cities of Astana, Almaty and Almaty area;

– Karaganda, with the center in Karaganda, including arrivals of the Karaganda region;

– Kokshetausky diocese, with the center in of Kokshetau, including arrivals of Akmolinsky area;

– Kostanaysky, with the center in of Kostanaye, including arrivals of the Kostanay region;

– Pavlodar, with the center in Pavlodar, including arrivals of the Pavlodar region;

– Peter and Paul Bulayevskaya a diocese, with the center in Petropavlovsk, including arrivals of the North Kazakhstan area;

– The Ural diocese, with the center in Uralsk, including arrivals of the Aktyubinsk, Atyrausky, West Kazakhstan and Mangistausky areas;

On May 29, 2012 in Astana the building of the Synod of Orthodox Church of Kazakhstan and Spiritual the cultural and educational center of a name equal to the apostles Kirill and Mefodiy was open.

In 2010 the Theological seminary in Almaty – the highest theological educational institution of orthodox church (earlier only spiritual school there worked) was open.

The close attention is paid to work with younger generation. It should be noted that now in each orthodox church youth groups (in addition to Sunday schools) work, and specially fixed priest head is engaged in them. In February, 2012 the I Congress of orthodox youth of the Republic of Kazakhstan at which the decision on creation of Orthodox youth movement of Kazakhstan was made took place.

The orthodox church is the constant participant of dialogue of religions and civilizations. Representatives of Orthodoxy actively act during forums, conferences, round tables of various level. Delegations of high level represented Russian Orthodox Church at all four congresses of leaders of world and traditional religions in Astana. For participation in work of the IV Congress in 2012 to the capital of Kazakhstan there arrived Patriarch of Moscow and all Russia Kirill.

In the performance he emphasized: "Kazakhstan and its hospitable capital already for the fourth time become a global platform of discussion of problems of universal character on the basis of dialogue of religious traditions. It is necessary to be glad to that with the assistance of the state structures leaders of world and traditional religions have here fine opportunity to gather and think over how ответить on calls, uniform not only for our religious communities, but also for the majority of people of the world".

From the very beginning of history of independent Kazakhstan the Russian Orthodox Church, in particular, its metropolitan district in RK, was and remains to this day the reliable partner of the state in carrying out policy of strengthening of the interfaith world and stability in society.