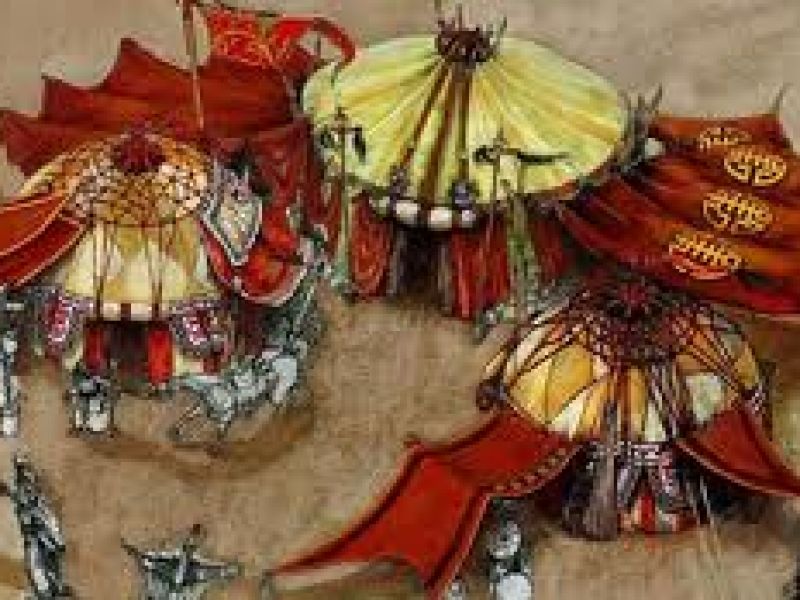 In 1227 Genghis Khan died. Date of death of Jochi is not indicated. According to the source of the 15th century, "Shadzharat al- Atrak," he died 6 months before his father's death, that is, in February 1227. His son Batu inherited him. Batu several times marched to the territory of West Dasht-i Kipchak, to the land of the Volga Bulgars and further to the west. As a result of the seven-year campaign (1236-1242) under the rule of Batu were the lands west of the Volga to the lower reaches of the Danube, including the Crimea, North Caucasus and Western Kipchak (Cuman) steppe. Returned to the Lower Volga, Batu founded a new Mongolian state, which later was named the Golden Horde. It included the territory of the Jochi Ulus – East Dasht-i Kipchak, i.e. steppes of Kazakhstan to the west of the upper reaches of the Ob and Irtysh and to the lower reaches of the Volga and the Amu Darya, a part of the Khorezm and Western Siberia and also the newly conquered lands to the west. Russian principalities defeated by hordes of Batu became the vassals of the Golden Horde. Russian princes recognized dependence on the Golden Horde, paid tribute, but remained relatively independent.

The Golden Horde was a multinational state. It included many tribes and ethnic groups differ in the socio-economic development, specific culture and customs. Most of the nomadic people in the steppes of Dasht-i Kipchak were the Turkic tribes, mainly the Kipchaks, also the Kanglys, Karluks, Naimans and many others. In the sedentary areas of the Golden Horde lived the Bulgars, Mordovians, Russians, Greeks, Circassians, Khorezms, etc. Actually the Mongols were a minority in it. By the turn of the 13-14th centuries the Mongols were almost turkicized, the population of the Golden Horde became known as the "Tatars".

The political system in the Golden Horde preserved the model introduced by Genghis Khan. The government was considered to be the property of Khan’s family, the Juchids. A political and military council was the Kurultai, led by the members of the Golden Horde ruling dynasty. The prime minister, or Beklare-bek, was responsible for army and diplomatic relations with other states. At the head of diuan (central body of executive power in the Golden Horde), was the minister, or vizier. He was in charge of finances, taxes and the inner life of the state. The local governors, or Darughachi and Basqaqs, were responsible for levying taxes and tributes. The most important positions were held by members of the Khan family. Large noyons were beks and emirs. Bahadurs were commanders of the groups of 100, 1000 and 10000 men.

The Golden Horde army was divided into right and left hand (or right and left wing) and was commanded by Tumenbasy (the leader of 10000 men), mynbasy (1000 men), zhuzbasy (100 men), onbasy (10 men). There were Bakauls – officials in charge of military supplies, payroll, booty and etc.

The Mongol conquests led to the destruction of the manufacture. The Mongol invasions destroyed the economic basis for the agriculture development in Semirechye and southern Kazakhstan, slowed down and destabilized the process of unifying of these areas. It caused some setbacks in the socio-economic structure of the conquered countries, including Kazakhstan. In public relations remained the most backward forms, including the slavery. However, along with disastrous consequences, there were some positives. Mongolian authorities encouraged the development of trade and international relations, introduced the postal service. Trade and cultural relations between before distant people were established. Caravans and diplomatic missions were moving on the territory of the uluses. The travelers went to distant lands and brought to Europe information about countries and peoples of unknown Asia. The Mongols brought to the steppe idea of centralized power and united before disorganized tribes.

Social and cultural development of the population in the Golden Horde was different. In the nomadic society dominated semi-patriarchal, semi-feudal relations, in the settled agricultural one – feudal relations. People were under the double pressure, because they had to pay taxes both to the Khan and the local feudal lords. Initially revenues received from pastoralists and farmers went to Khan's treasury.

Peasant farmers paid the tax in kind for land cultivated by them ("Kolan"), and the pastoral nomads paid the tax "Kopchur." Ortakshi, i.e. groups of farmers together cultivating the land, in addition to a payment of tax had to farm the lands of the feudal lords. People were under labor obligations (construction and repair, pack transport, etc.).

The Golden Horde was of great importance in the history of the peoples of Eurasia. It had an impact on:

- statehood establishment in many regions;

- strengthening of relations between the Mongol, Turkic and Slavic cultures;

- the beginning of a new history of the Eurasian continent because of the decline of the Golden Horde;

- Cessation of prolonged civil wars and the completion of the integration of Russia as well as China;

- Encouraging the development of trade and international relations by the Mongolian authorities, the introduction of postal service system;

- The establishment of trade and cultural relations between the formerly distant nations;

- Expanding of Europe’s knowledge about Asian countries by the information brought back by ambassadors and merchants;

- Bringing ​​by the Mongols the idea of central government to the steppe, the unification of before disjoined tribes.

The highest point of development, and the beginning of the crisis of nomads, apparently, was the Golden Horde at its peak. But after that the Golden Horde Khans constantly were at war with each other, ruining the neighbors, stealing livestock and people. Tired of the endless strife, whole clans led by their princes went to safer cities. A lot of the Golden morzalar moved to Moscow, Tver, Smolensk.  Many new surnames descended from them: Chaadayev, Timiryazev, Turgenev, etc. Thousands of nomads moved to the Caucasus, Egypt, Iran and remained there for nowadays. Nomadic pastoralism came into decline. The reason for this was the endless war between the nomads themselves - Tokhtamysh against Timur, Timur against Bayezid, Nogai with Tokhtai. It was an obvious crisis of the state organization and the economic life of the nomads. The collapse of the once-powerful Golden Horde led to the creation of new states, both sedentary and nomadic. For example, formed in the 15-16th centuries the Kazakh Khanate and later the Zunghar Khanate were the latest and most powerful states of nomadic civilization.

After the collapse of the Golden Horde formed in its territory Crimean, Kazan, Siberian, Astrakhan Khanates did not get along with each other, and later fell under the blows of strengthened neighbors.