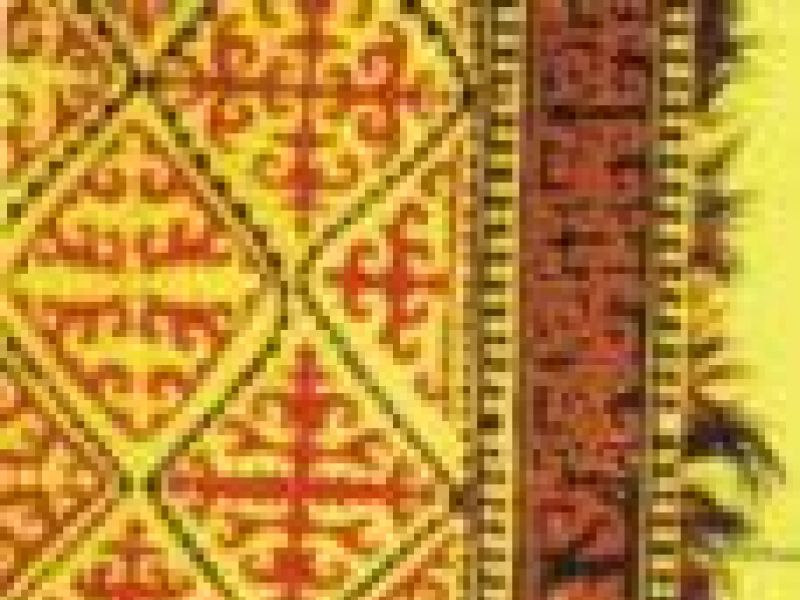 The main and most stable element of arts and crafts of nomadic people is ornament. At the beginning of the 20th century, it was described by the connoisseur of ethnography of the Kazakh people G.N. Potanin. The Kazakh ornament, he noted, "penetrates into all the stuff of the home environment; in yurt through the hard-working housewife, every shred of felt, any piece of leather and every single inch of wood surface is painted with ornament. The floor in yurts is covered with felt on the white surface on which printed the pieces of black and red cloth that were cut symmetrically. The rear wall is set out with chests in felt covers; their surface is also decorated with patterns. Even the felts that are covering the arch tent are painted with ornament. The Hardworking genius transformed the yurt into an art gallery, more precisely in the exhibition of ornaments" 27.

The most common products of masters are the patterned felts. Those are the heavy tekemets with large patterns of spiral curls and syrmaki which are implemented with technical mosaics and wall felt carpets (tuzkiizy) patterned with fine applique, and numerous colorful felts on a blanket chests (sandyk kapi), the tires on pillows (zhastyk kapi), bags for storing the utensils (ayakkapy) . The woven fabric products from sheep and camel wool are also quite popular: the multicolored ribbon with fringe (bau), the stripes (baskur) and tracks (beldeu), the colorful rugs (alasha , takyr klem), pile carpets (tukti klem), the saddle bags (korzhyn) and the saddle cloths for horses (am zhabu), etc.

With all the richness and variety of colorful world of ornamental art, we could see the familiar to us from the ancient monuments of Kazakhstan geometric motifs, zoomorphic and plant ornaments at various products made ​​of felt, wool, bone, wood, leather, metal and ceramic. For example, such motives as a ram's horn - koshkar muyiz, the bent inward curls - kiik muyiz, the cloven hoof - ashatuyak, camel trail - tuetaban, bird's beak and the bird wing - kusmuryn, kuskanat, went into the depths of the Saka period of time, based on the numerous subjects of once vibrant animal style. By this time, should also include the appearance of floral ornament, which apparently arose under the influence of the art of the Middle East. The ancient solar and geometric motifs. In all kinds of triangles - tumarsha, zigzag-iyrek, the rectangular shapes with spikes - tarak, the solar patterns alike the swirl type socket - ayshik, we could see the traces of prehistoric art pastoralists three thousand years old.

It will be naive to see in each pattern of modern arts and crafts its ancient prototype. The arts and crafts of nomadic people is a complex and diverse phenomenon of art in which the old tradition of art of a people is constantly enriched by the close cultural and historical interaction with neighboring peoples. Much of the old life, rituals and customs that affected the earlier ornamental art, are now filed as a history. However, many stuff that will meet the needs of the people in decorating clothing, housing, household goods, has survived to this day. The semantics of ornaments or the meaning of patterns, which saved the individual images of half-forgotten myths and beliefs of the people, is still interesting evidence of a long tradition of arts and crafts

The old masters still remember the ancient symbols that were embedded in the name of some ornaments. Signs koshkar muyiz and ashatuyak designated the material prosperity of the cattleman. If the clothes was decorated with the tueban pattern (camel trail), it meant that the clothes was sewn for a long road, if a person wish someone happiness, freedom and independence, he then gifted the thing decorated with signs “kusmuryn" and "kuskanat". The girls wear “kusmuryn zhuzik" or "shynzhyrly blezik”, the rings on a chain, where one ring is a “bird’s beak” and another is “bird wing”. The term "oyu" (to make things depper) is still used in the art of manufacturing the patterned felts. The ornament on felt could be prepared by instilling the pattern of another color. Nevertheless, the term «oyu», the origin of which is associated with the ancient technique of rock art and stone carving, preserved until today. The rich artistic heritage of the Kazakh people, the well-developed ornamental art, the technical skills and a unique color, all of them was widely used in the folk crafts of Kazakhstan.

Application of colored cloth, a fragment, the Chimkent region.