Home History of Kazakhstan Kazakhstan in the Soviet Union Postwar Kazakhstan (1946-1970) Creation of uniform transport system in the republic.

Creation of uniform transport system in the republic. 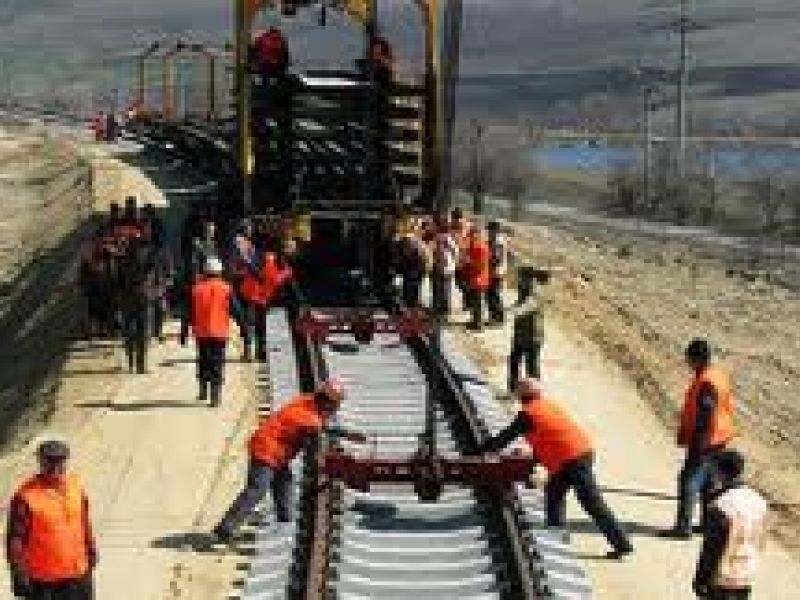 Development of a national economy in the republic in post-war years, in particular formation and development of new industrial and agricultural regions, development virgin and laylands, involvement in economic circulation of new mineral deposits demanded the accelerated development of all means of transport, in particular railway which always performed the main work on transportation of economic freights. Operational length of railway lines of Kazakhstan increased from 8 212 km in 1945 to 11 470 km — in 1960 and to 13 669 km — in 1970. Scales of development of the industry and agriculture of the republic caused rates of transport construction, first of all the railway.

On October 27, 1953 Mointa's line was put in continuous operation — Choo who finished a construction of the Transkazakhstan highway. As a result the Karaganda railroad on the shortest distance communicated with Turkestano-Sibirsky. Northern and the Central Kazakhstan the republics and to Central Asia received the shortest exit to the south. In 1953 the Akmolinsk line — Pavlodar, become to one of the main sites of the Southern Siberian highway, having exclusive value for economic relations of Northern and Central Kazakhstan was put in continuous operation, having connected these areas to Siberia, the Southern Kazakhstan and Central Asia, Ural with Kuzbass. It has huge impact on development of the Ekibastuzsky coal basin, development of Boshekulsky fields of ore etc.

Industrial development of the oil field of Kazakhstan, natural richness of the peninsula of Mangyshlak, also substantially depended on existence of modern means of communication. Therefore in the Western Kazakhstan construction of a number of the major railway lines, such as Makat — Aktau, Aktau — Zhetybay — Uzen, Gurjev — Astrakhan, Beyneu — Kungrad which in the shortest way connected the oil regions of Kazakhstan to a uniform railway system of the country and created opportunity to broad industrial development of the Western Kazakhstan began.

In the 60th also railway lines Kustanai — Tobol, connected Sokolovsko-Sarbaysky mining and processing works with a railway system of the country, and Tobol — Dzhetygara, opened access to development of the richest field of asbestos were finished. For the purpose of development of turgaysky bauxites in 1961 constructed the line Esil — Arkalyk which is used and for export of agricultural production from the central regions of the Kustanay and Akmolinsky areas. Ermentau's railway lines — Aksu — Aysara were also constructed.

Operational length of the Kazakh highway for January 1, 1971 made 13 120 km, or 9,4% of the general extent of a network of the country, goods turnover — 8,3%, a passenger turnover — 5,9% from the total amount of rail transportation of the Union.

Up to the beginning of a semiletka the road was generally served by locomotive draft, and only a little more than 1/3 operational lines were served by diesel draft. By 1968 new types of draft completely forced out locomotive draft, and by January 1, 1971 from the general extent of the highway more than 97% were served by diesel and elektrovozny draft. Elektrifikatsionnye two-acceptable sites Tselinograd — Azhar, Azhar — Karaganda, Tobol — Esil, Tselinograd — SP-90, SP-90 — Esil were equipped with the newest equipment of means of communication. Considerably communication at movement of trains improved; by January 1, 1971 about 82% of the total operational length of the highway were equipped with modern technical means of communication. A lot of work was carried out on the highway on mechanization and automation of productions. For example, construction of the raised ways for the mechanized unloading of coal, introduction loading разрузочных cars and mechanisms etc. allowed to lift level of mechanization of loading and unloading works on the highway in 1959 — 1965 with 52,3 to 80%26. Use of heavy traveling cars, electroexecutive and hydraulic tools, hoisting-and-transport means allowed to lift sharply for years of a semiletka level of mechanization of works on way repair: on overhaul with 28 in 1958 to 66% — in 1965 on average repair — respectively, with 18 to 60,6%, on podjemochny repair — with 15 to 53,1%, on the current contents — with 6 to 27,1%.

Along with railway transport in development of a national economy a big role in the republic play motor, water, pipeline and air transport. The motor transport in the conditions of Kazakhstan with its huge territory has extremely importance, especially for the areas remote from the railroad of waterways. Exploitation of natural resources, involvement in economic circulation of industrial facilities, off road terrain demanded the accelerated development of motor transport. In the republic broad road construction, in particular in areas of development virgin and laylands was successfully carried out. Extent of highways with a firm covering from 11,2 thousand km in 1960 increased to 41,1 thousand km. in 1970, i.e. by 3,7 times. Extent of advanced roads with a cement and asphalt concrete covering and the black highway grew by 5 times — from 4,1 thousand km in 1960 to 21,2 thousand km in 1970 28. Thanks to it in Kazakhstan by the end of the 60th. about 90% of the central estates of state farms and collective farms and 85,4% of large settlements were connected by bus service to the regional centers, and 97% of the regional centers — with the regional cities. All central estates of state farms of the Kokchetav, North Kazakhstan, East Kazakhstan areas had bus service. In many cities and the regional centers new bus stations, autostations were constructed. Only in 1970 four new bus stations (in Uralsk, Petropavlovsk and Seven-lake) and 51 autostations entered into a system.

The accelerated rates of dews also updated vehicle fleet: motor transport services replenished mainly with cars of the increased loading capacity (GAZ-53, ZIL-130, ZIL-130в, MAZ-503, U ral-377, etc.), the bus fleet only in 1961 — 1965 grew more than twice. The repair and production base of motor transport became stronger and extended.

Were reconstructed operating and new large car repair plants in Alma-Ata (ARO-2), Kustanai, Semipalatinsk, Pavlodar, in the settlement of Danilovk, Ust Kamenogorsk, Aktyubinsk, etc. the cities, Almaty plant of the garage equipment are constructed. Only in 1959 — 1965 by 5,8 times the capacity of these plants on production of overhaul of cars increased. Motor transport management was improved. Small departmental motor transport services were liquidated; their concentration in system of public motor transport amplified. Thus, broad road construction, a hardware of motor transport services, quantitative and high-quality growth of fleet of vehicles turned motor transport into one of main types of transport on transportation of economic freights and passengers.

In the 60th the accelerated rates pipeline transport developed also. With development of oil riches the oil pipeline of Uzen started acting on the peninsula of Mangyshlak — Zhetybay — Shevchen to. In 1970 the powerful main oil pipeline of Uzen — Gurjev — Kuibyshev for pumping of oil on the Guryev, Kuibyshev and Volgograd oil refineries was entered. With construction of the largest gas pipeline Central Asia-Center branches are brought to Aktyubinsk, Ore, to Kustanai. In 1970 the gas pipeline construction Bukhara — Tashkent, further through Chimkent, Dzhambul and Frunze to the capital of the republic — Alma-Ata was complete. Thanks to it gasifications in the republic every year were increased the pace. Considerable development have as well such means of transport, as aviation and water.

Despite all these and other results in transport development, Kazakhstan still felt shortcomings of security with perfect means of communication and considerably lagged behind some other the republics and all-union level. Air transport, waterways and pipelines were very poorly developed. At the same time the 60th were the period of creation of a uniform transport network in Kazakhstan that became the powerful lever of deepening of territorial division of labor, expansion and strengthening of economic relations between republic regions, and also Kazakhstan with the Center, the Urals, Siberia and Central Asia.

Industrial progress created opportunities for growth of working class of Kazakhstan, in particular in its industrial, work branches, predetermined serious changes in social structure of the population of Kazakhstan.