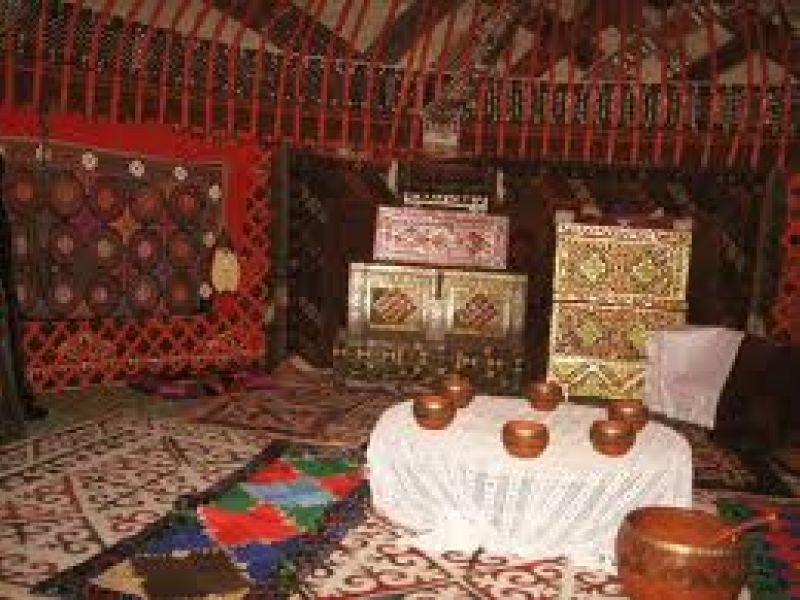 Kazakhs have always revered and highly valued their national customs and traditions. It is almost impossible to describe all the traditions followed by Kazakh people in one article, thus a brief introduction to Kazakh beliefs and customs is given below.

The main tradition of Kazakhs, which eventually transformed into a feature of national character, is hospitality. In the Kazakh society, there is an unofficial law voiced in ancient times, which says “Meet a guest as the God's messenger”.
Hospitality is considered a sacred duty in the Kazakh society. At all times, the steppe inhabitants did their best to please their guest. Therefore, each traveller knew that he or she would be welcomed anywhere in the Kazakh land.

Respect for the elderly is another positive feature of Kazakhs. Traditionally, a child from early childhood is taught to be moderate and honest when dealing with older, wiser and life experienced people.
However, the above mentioned national identities that served as a basis for the occurrence of generalized rules and principles of public relations (tradition), fortunately, are confined not only to representatives of the Kazakh people. Therefore, we offer to your attention a list of basic and authentic customs, which are widespread in the Kazakh society.

1. Traditions and customs associated with the guest reception

Travellers in Kazakhstan are most likely to be encountered with the traditions, associated with guest reception. Here are some examples of them:

Konakasy - a custom associated with treating of a guest. As mentioned above, Kazakh people since ancient times have been famous for their hospitality. Kazakhs always reserve the tastiest food for guests. Guests are divided into three types: "arnayy konak" is a specially invited guest, "kudayy konak" - a random stranger (uninvited), "kydyrma konak" - an unexpected guest. All these guests, despite of their type are offered a rich table – Konakasy.

Konakkade - a tradition under which a host has a right to ask a guest to sing a song or play a musical instrument (of course, as long as a guest is known for his or her talent), thus ensuring some fun and joy during the feast.

Erulik - if new settlers came to a village erulik was arranged in their honour, i.e. a small celebration that allowed newcomers to quickly adapt to the new location. Also, the custom erulik includes assistance in settling of the newcomers, when neighbours provide them with firewood, drinking water, etc. for the time being.

Toy dastarkhan - a special form of celebration, organized for holiday or during it. Sports competitions, music, singing competitions (aitys) and horse riding competitions are organised in addition to the gatherings during Toy dastarkhan. Very often, dishes of Kazakh national cuisine are served during such occasions.

Guests are very often have to receive or give presents; in addition, there are often times, when gifts should be given in some special occasions according to the traditions. Some examples are given below:

Suyіnshі - a custom according to which a traveller or any other person who brought home a good message (news) receives a valuable gift from the owners in gratitude. Sometimes before telling good news a person says ‘Suyunshi’ or ‘what would you give me for a Suyinshi?’, thus implying that he or she has something great to tell.

“At mingizip shapan zhabu" is a high honour. According to the tradition, a respected visitor, who may be a poet (akin), a hero, warrior (batir) or other very respected man receives a gift from local residents: a horse and a splendid shapan (robe of camel's hair with a cotton lining) in recognition of their merit.

Baygazy - a tradition of giving a gift to a person, who acquired a new valuable thing.

Helping each other has always been highly valued by Kazakhs and is very important in a Kazakh community. Therefore, there are a number of traditions, which are associated with mutual aid. Some of them are listed below:

Asar - a family, which has to perform an urgent and sometimes a hard work, has a right to ask relatives, friends and neighbours for assistance. At the end of the work, a rich table is laid as a gratitude for those, who helped.

Zhylu - a tradition associated with the provision of material, moral and financial assistance to people affected by natural disasters (fire, flood, etc.). All supporters, not only relatives are entitled to help the victims. Many things can be given as donations - livestock, building materials, clothing, money, etc.

Belkoterer - a tradition to treat the elderly. Delicious and most importantly - soft foods such as kazy, zhent, cottage cheese are cooked for the elderly. Typically, this responsibility rests on children or close relatives, the less likely neighbours. Belkoterer tradition is an example of caring for the elderly.

4. Traditions and customs associated with birth and upbringing of the child

Traditions, connected with the birth of children and their upbringing, apparently play a very important role in many cultures. Just a brief description of such rituals and traditions followed by Kazakh families, is given below. All of these rituals are usually followed by celebrations.

Shіldehana - a celebration that is associated with childbirth.

Besіkke salu, besik toy - a holiday, hosted when the newborn is put to a cradle - besik. As a rule, it is organized on the 3rd-5th day after dropout of umbilical cord of the kid.

Kyrkynan shygaru – a ritual performed on the fortieth day after birth that includes bathing baby in 40 tablespoons of water, and the first haircut and nail cut and other rituals.

Tusau kesu - a day when the baby took his first steps the oldest and most respected people is invited to perform a ceremony of Tusau keser. Then he or she should cut the special ropes, beset baby's legs, in order to ensure that in future the kid could walk nicely and run fast.

Sundetke otyrgyzu is a rite of circumcision. The ceremony is held when a boy is 5-7 years old. A big festival to which all the relatives and friends are invited is organized after this. On the occasion of Sundetke otyrgyzu guests usually make generous gifts to the hero of the occasion and his parents.

5. Traditions and customs related to marriage

One of unique Kazakh traditions related to marriages is that the marriage between relatives up to the seventh generation is prohibited. Such taboo helps to prevent blood mixing and, consequently, benefit to the health of future offspring.
Traditionally, sequence of the ceremonies and rituals related to a marriage is the following.
Any wedding ceremony in the Kazakh society is anticipated by kudalyk (matchmaking). Before the wedding, matchmakers come to bride's house. Their task is to agree with the closest relatives of a girl on her marriage. During courtship, father of the bride receives gifts from the guests that serve as a deposit.
If negotiations are successful, the father, in turn, presents a coat to the main matchmaker. This custom is called “Shege Sapa”. Preparation of "kuyruk bauyr" - a delicious dish from the liver and broad tail fat also testifies to the successful completion of courtship.

In the 15th — 17th centuries Islam had little influence on the life of Kazakhs. There was no wedding ceremony in the presence of Mullah. Marital ties were ratified by the endorsement of people and singing choral songs. Zhar-zhar is a ceremonial song and a kind of competition between two groups: men led by bridegroom and women led by bride.

The next stage of the ceremony is sendoff of the bride Kyz uzatu. In the evening before the Kyz uzatu matchmakers come to the bride's house again. Number of visitors should not be even (5-7). Early in the morning, the bride with matchmakers is sent to the groom's house.
Solemn ceremony of meeting the bride in the groom’s house is called kelіn tusіru. The main element of kelіn tүsіru is a traditional performance of a song of instructions and wishes - Betashar.
In ancient times when the Kazakhs practiced a nomadic lifestyle, dwelling (yurt) of newlyweds was located behind the house of groom’s parents. According to the tradition, the first threshold of the yurt was to be crossed by the bride, and be sure to do it with the right foot. Also during the wedding ceremony, the couple must drink together a bowl of water with dissolved sugar and salt. This ritual is considered as a guarantor of a happy family life.

6. The most ancient traditions of Kazakh people

Ashamayga mingizu is a ritual whereby a 6-7-years-old boy was supposed to be given a horse and whip. Such a ritual is a kind of "initiation", having proclaimed that the child is a jigit. On this day, elders blessed the young rider and parents organized a small celebration in honour of their son.

Bastangy is an ancient analog of contemporary youth parties. Traditionally, these celebrations are conducted immediately after departure of adults. During Bastangy, guests express only one wish that the travel of the adults would be accompanied by luck.