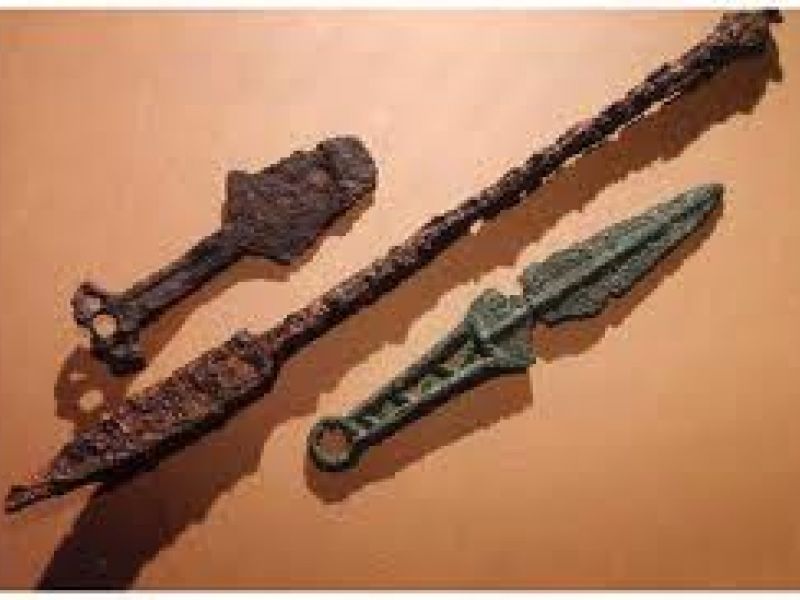 At the beginning of this time on the territory of Kazakhstan the representatives of the so-called yamnoi cultural and historical community penetrated to the territory of Kazakhstan from the West.  Presumably, their advancement was very rapid in historical sense which is proved by monuments found in Kazakhstan at present. The economy of yamnikov was chiefly shepherd's, they made four-wheel wooden wagons, used copper instruments. Later the descendants of yamnikov created Afanasiev culture, in which region, besides South Siberia, East Kazakhstan joined. The unique, the most eastern "yamnik" monuments are burial mound №2 of the burial ground Каragash (200 kilometres to the south-east of  Karaganda) and the burial discovered in the burial ground of Grigorievka - 2(35 kilometres to the north of Pavlodar).

Part of Western and North Kazakhstan was included in the region of sintashtin culture (XX - XVIII centuries B.C.)  which the well-known fortified settlement of Arkaim (Chelyabinsk region of Russia) belongs to. There is a settlement of Каmysty (Pervomaiskoe) in the Kostanai region that is  similar by its architecture  to  Arkaim. Sintashtin  burial grounds are Таnabergen  II and Zhaman –Каrgala I in Аktоbe region.

Monuments of Andronov cultural and historical community(XVIII - XIII centuries B.C.), extending westerly to the east of Ural till Yenisei and from the north to the south from taiga to the mountains of Pamir, Tien Shan and Altai. The territory of Kazakhstan was the basic zone  of habitation of Andronov  tribes, which materials of numerous and bright monuments, including settlements, having a considerable area and burial grounds with plenty of funeral building, are evidence of.  The leading role of tribes of the Kazakhstan region, especially of Central Kazakhstan, was conditioned by the richest beds of copper ore and large-ascale metallurgical production. Andronov community consisted of three archaeological cultures: Petrov, Alakol, and Fedorov.

Petrov culture(XVIII - XVI centuries B.C.). Its settlements – Pеtrovka  II(giving name to all the  culture), Амангельды I, Кеnotkel  V, Semiozernoe  II, Novonikolskoe I, Bogolubovo I are known in North Kazakhstan. The charachteristik features of Peter settlements is the presence of defensive ditches. Petrov funeral monuments are presented by the isolated child's cemeteries, burial submound places of adult men-warriors(now and then women). In the burial mounds of burial grounds of Кenes, Ulybai, Berlik,  Novonikolskoe (North Kazakhstan), late Petrov burial ground of Satan (Central Kazakhstan) were found remains of  two-wheel battle wagons or chariots(in filling of graves the imprints of wheels with spokes  are fixed). Bones of  domestic animals, the development of domestic trades such as pottery, weaving, bonecutting , making of decorations, weapons and tools from bronze, making of chariots -  all these are evidence of  productive economy. There was a complex breeding-agricultural economy which basis was made by the shepherd's cattle breeding.

Alakol culture is dated XV - XIII centuries B.C. Territorially it spreads on the whole territory of Kazakhstan, except its east regions. The material culture of Alakol grew on the basis of the culture of Petrov  tribes that showed up in ceramics, thing inventory, architecture, funeral ceremony. The most well-known settlements – Alekseev, Pereleska II, Yavlenka I, Petrovka I(North Kazakhstan), Atasu I(Central Kazakhstan). The breeding-agricultural orientation of economy gets further development, there is the development of bronzcasting  production, weaving, pottery and other home trades.

Late period(XII - IX вв. B.C.).Sargarinsko-Alekseevsk culture  was called  so due to the names of two main monuments : complex Sargary (Аkmola region) and settlement Alekseev (Kostanai region). Monuments of this culture are on the whole territory of  Kazakhstan, and also in the steppe of Altai in Russia. The most necessary component of their inventory were the clay vessels decorated on the neck by a sticked on or wet-process roller. No less than two hundred settlements  (for example, Sargary, Alekseev, Sadtschikovskoe, Atasu I, Taldysai, Bygyly II, Kopa I) and about 40 burial grounds (Sargary, Karatugai, Aktoprak) of this culture are known.  On many settlements (Atasu I, Тaldysai )  there are signs of own bronzecasting production - stoves for smelting of copper, slag, casting forms. On the whole the economy of population of late bronze period is mainly characterized as focused on cattle breeding.

Due to the most bright burial grounds the late bronze culture of the population of Central Kazakhstan was called  begazy-dandybaev. Both burial grounds, giving the name to the culture, are in the Karaganda area(the burial ground of Dandybai is at present flooded by a storage pool). On the burial ground Begazy were dug out the grandiose for that time building called mausoleums. Lithoidal begazy-dandybaev mausoleums are investigated also in the burial grounds of Enbeksyigysh, Aibas-Darasy, Bygyly-3, Sangyry - 1, Ortau - 2(all in Karaganda region) . Large lithoidal mausoleums, in accordance to this conception, are the places of burial of leaders of local tribal associations, which were served by large settlements of town type (Kent, Bуgуly - 1 and other) but small burials and settlements belonged to the ordinary population.

The transitional period from the epoch of bronze to the early Iron Age (VIII  century B.C.). A supporting monument is a settlement of Dongal (Karaganda region), the ceramics of that were distinguished in the special type (dongal), combining the signs of sargarinsk-alekseev tableware with features, having been developed in the subsequent epoch of Iron Age.  Dongal Ceramics was found in the materials of many settlements of Kazakhstan and Altai, and also in the burials of the burial ground Kyzyl (Karaganda region). According to the materials of the settlement of Burgulyuk the ceramics of Karzhantau type, much similar to Dongal tableware had been made in South Kazakhstan.