Social and economic development of the Kazakh society in XVIII — the middle of the XIX century. 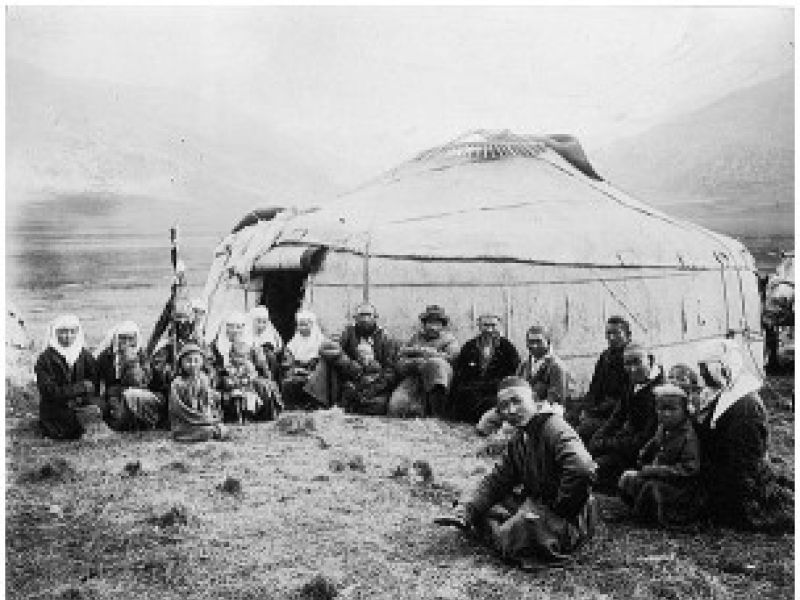 Cattle breeding. As a result of climatic conditions of Kazakhstan the main form of environmental management and population life support throughout three millennia was the nomadic cattle breeding — a special sort of making economy at which prevailing occupation is the extensive mobile cattle breeding, and the most part of the population is involved in seasonal migration.

The main feature of nomadic cattle breeding was the year-round maintenance of cattle on underfoot to a stern that was caused by deficiency of fodder and water resources.

Features of habitat determined ways of use by Kazakhs of natural resources as winter, spring, autumn and summer pastures. For winter pastures coast of lakes, valleys of the rivers, mountain gorges, wood edges, low mountains and the southern slopes of hills, i.e. places where there were natural means of protection of herds from snow, storms and winds were used. Autumn and spring pastures usually took place on nearby from winterings land grounds which were early exempted from snow cover. Summer pastures settled down, as a rule, in territories with a large supply of an rains, rather plentiful vegetable cover and existence of water resources of a natural origin.

Features of the geographical environment and requirement of life support of Kazakhs defined also specific structure of herd. Specific weight of sheep in it averaged 60% of all livestock, horses — 13, cattle — 12, camels — 4%. An important role in regulation of specific structure of herd was played by ability of animals to adapt for fast and frequent migration, and also possibility of their multi-purpose use in economic (meat, milk, wool) and political life (transport, military purposes).

In Kazakhstan there were two types of cattle breeding economy: the nomadic cattle breeding based on operation of artificial water sources, and semi-nomadic economy — on utilization of water resources of a natural origin.

The first type of cattle breeding economy was localized in areas with sharply expressed aridity and continentality of climatic conditions, low efficiency of a vegetable cover, lack of natural reservoirs (the steppe, the semi-desert, the desert, mountain and foothill areas).

The big work spent by cattle-farmers for creation of a network of artificial wells and extraction of a necessary minimum of water, almost completely absorbed their energy resources and working hours which was subordinated only to interests and needs of nomadic cattle breeding. Limitation of water sources and forages dictated the increased frequency of migrations, short duration of stops and huge amplitude of a migration. As a result of it in a structure herds prevailed the most mobile and hardy animal species (sheep and camels), all subjects of material culture (a yurta, house utensils) most fully corresponded to a nomadic way of life and cattle breeding economy. Such type of economic activity gained distribution on the peninsula of Mangyshlak, a plateau Ustyurt, in some areas Priaralye, the Western and the Central Kazakhstan.

Other type of nomadic cattle breeding developed in the landscape zones, the precipitation which was characterized by more uniform distribution on seasons of year, the rivers with a year-round drain of water, existence of fertile sites of the soil and so forth. River and valleys concern to them in steppe and forest-steppe zones, a foothill and mountain strip. Rather high efficiency of a vegetable cover and the best security with water-supplies determined the big duration of parking and less intensive mode of a migration in these areas, limited an area of migrations. For this purpose like economy existence of a bigger share of cattle and horses, smaller — camels and a small cattle was characteristic. Some features are traced and in character of a pasture of cattle: unlike the farms of the first type which were in a mode of a year-round migration, in farms of natural water use the stationary winter-hut, and therefore construction of constant winter dwellings and economic constructions took place. Many cattle breeding farms had an opportunity to be engaged in the winter territory in agriculture and fishery. Specific weight of the second type of farms was especially considerable in East and North East Kazakhstan, Semirechye and South Kazakhstan's some regions.

Agriculture. The second place in structure of economic occupations of Kazakhs was taken by agriculture. The centers of agricultural culture were localized, as a rule, in the most convenient for arable farming in the climatic relation the regions of Kazakhstan. Valleys of Mugodzhar mountains were such areas in the northwest of the territory in basins of the river of Sagyz, Emba, Ilek, Irgiz, Utva and Wil: in the Central Kazakhstan — valleys of an average current of river of Sarysu; in the south — across Syr-Darya, Kuvandarye and Zhanadarye: in the north — across Ishim, Nur and Turgay with their inflows; in East Kazakhstan at Kalbinsk and Tarbagatay ridges, in Karkarala's foothills; in Semirechye — on Lepsa, Aksa, Karatala's upper courses and on the average. And a geographical position of these territories, orographical and soil climatic conditions, existence of water resources, intensity of cultural and economic contacts with the next settled and agricultural people made a certain impact on level and the amount of the Kazakh agriculture, selection of agricultural cultures, extent of agronomical loans at neighbors, ways of use of agricultural products in economic and other purposes.

The relation of bulk of the nomadic population to agriculture was in direct dependence on a condition of its cattle breeding economy. Most sharply instability of the economic and social situation was felt by the Kazakh poor. Feeling big need for use of additional resources for receiving a subsistence, she was compelled to address to occupations by agriculture. By Y.P. Gaverdov, E.K.Meyendorf, A.I.Levshin's definition, sultan T. Seydalin and other eyewitnesses, occupation by agriculture, as well as some other subsidiary trades, was a "poverty" indicator at Kazakhs.

At the same time agriculture at needy individuals was in close dependence on a condition of this grow in farms of the most prosperous cattle-farmers which used work of poor people.