History of the foreign policy relations of Kazakh khanate and Russia in the XVI – beginning of the XVIII centuries. 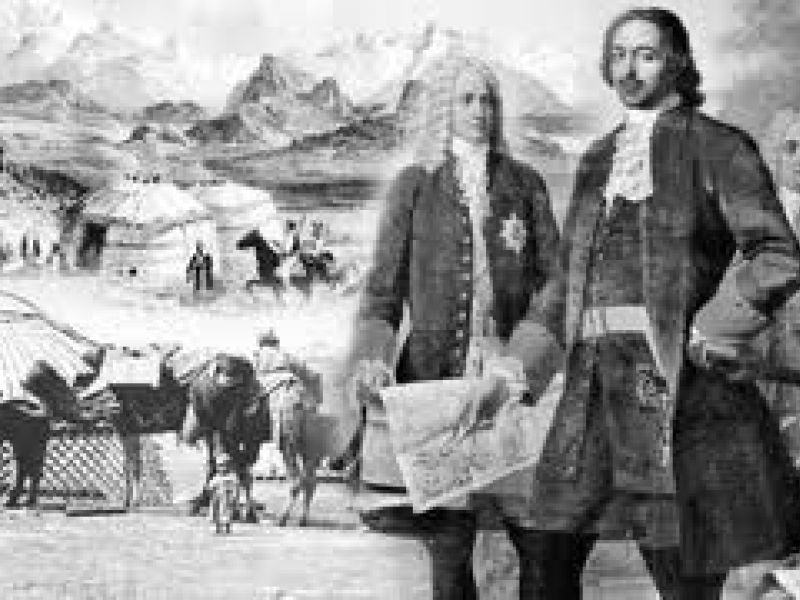 Accession of Kazakhstan to Russia was preceded by considerable political connections between them. Russian state showed interest in expansion of the frontiers in the east. In process of centralization and government strengthening possibilities of a trade exchange and other forms of relationship with the people adjoining to east states considerably increased.

Gain of Kazan (1552), Astrakhan (1556) khanates, South Western Siberia by Ivan IV, establishment of the Kamsk trade way facilitated direct contacts with the Kazakh khanate also. Interest of the Russian state in Kazakhstan especially increased from the 2nd half of the XVI century, after establishment of trade and diplomatic relations of Russia with the Central Asian khanates.

Russian state interested in development of transit trade ways with the Central Asian khanates through Kazakhstan and seeking to ensure safety of passing of merchant caravans, took a keen interest to a political situation and relationship of the Kazakh khanate with neighboring countries. Moscow sovereigns sought for establishment of direct connections with Kazakh khans. The big role in it was played by ambassadorial communications. In 1573 the Russian embassy was sent to Kazakh steppe led by Tretiak Chebukov. The embassy had a problem of adjustment of trade with Kazakhs. However Chebukov's diplomatic mission didn't reach borders of Kazakhstan as it was exterminated by the nephew of the Siberian khan Kuchum Mametkul.

In 1577 the Russian ambassador Boris Domozhirov who has come back from the Nogai Horde, noted that the Kazakh khan who was threatening nogays and having communications with Tashkent and Urgench, was with "the tsar and the grand duke of the world". In 1594 the 1st Kazakh embassy arrived to Moscow. The envoy of khan Tauyekel Kul - Mohammed had an assignment to release his nephew Uraz-Mohammed who was "amanat" in Moscow, i.e. the hostage, and to conclude friendly agreement with the Russian government. Besides, he had to achieve "fiery battle" from Boris Godunov to fight with neighboring and conflicting feudal khanates. In the response diploma of the Russian tsar to khan Tauyekel the parcel was promised with "army with fiery battle" and "protection" of Kazakhs from all his opponents. Russian state which has achieved at the end of the XV-XVI centuries of noticeable successes in economic and political development, encouraged trade at east boundaries of the country, having, of course, and political goals. In Ivan the Terrible Jacob and Grigory Stroganov's appointed diploma on May 30, 1574 it was allowed to trade with the people of Kazakhstan and Central Asia.

Both parties were equally interested in trade and economic relations. By barter Kazakhs acquired household goods, firearms, and Russians received from them various raw materials, cattle. Allies in fight against Kuchum's descendants, a free entry into the markets of Central Asia, safety lying through the territory of Kazakhstan of caravan routes were necessary to the Russian state. In turn, Kazakhs who were exposed to continuous ruinous attacks of the Central Asian khanates, were interested in expansion of contacts with Moscow. For safety of commercial relations with Kazakhstan, Siberia, Central Asia Russian state along with advance of explorers, merchants, embassies and military groups started intensive construction of strengthened points fortresses on the border with Kazakhstan.

The first Russian city in the territory of Western Siberia, near borders of Kazakhstan, the small town “Big Ob town" on the right coast of the Ob River at flowing of the Irtysh River into it was located . For a short time of existence (it was destroyed in 1594) it served as starting point for further advance of the Russian military  groups in depth of Siberia and to borders of Kazakhstan. Then Tyumen (1586), Tobolsk (1587), Taru (1594), Tomsk (1604) were constructed.

Formation of the Dzhungar khanate (1635) brought essential changes in Central Asia. Tauke khan expressing interests of ruling feudal group, being the far-sighted politician, constantly sought for consolidation of the state border. Goodwill of Tauka to Russia was caused by his attempt to strengthen position of Kazakhstan, maintaining relations with Russia. In 1687 the Kazakh embassy was sent to Tobolsk led by batyr Tashim with an assignment to invite Russian merchants to Kazakhstan. The mission included Kazakh dealers, intending to clear away the basis for economic relations with the Russian state through the Siberian cities. In 1689 – the beginning of 1690 other embassy is sent to Tobolsk led by the Tuman batyr. However, these communications weren't issued legally, by signing concrete mutually favorable agreements what, most likely, was caused, on the one hand, by aspiration of the Kazakh owners to keep an independent condition of the khanate, and, on the other hand – position of Russia occupied with the Polish and Turkish affairs. The domestic situation of the Kazakh khanate also didn't favor to quiet development of its external economic contacts with Russia.

In 1717 certain leaders of Kazakh sultans Kaip and Abulkhair, considering complexity of foreign policy provision of Kazakh tribes and real threat from external opponents, addressed to Peter I with a request for a military alliance. The last, being occupied with war with Sweden and having data on internal disorders and interstine conflicts of Kazakh tribes, didn't take a risk of intervention in the"Kazakh affairs", continuing to watch events in Kazakhstan, Central Asia and Dzungaria. Peter's I desire to have a Kyrgyz-kaysatsk horde as a part of the Russian state was caused by his intention not only to expand borders of the state, but aspiration to secure eastern frontiers of Russia. According to Peter's I personal order military and engineering constructions – Yamyshevsk (1716), Omsk (1716), Zhelezinsk (1717), Semipalatinsk (1718), Ust Kamenogorsk, Koryakovsk (1720) and other military and defensive points which have made the Upper Irtysh line were created.