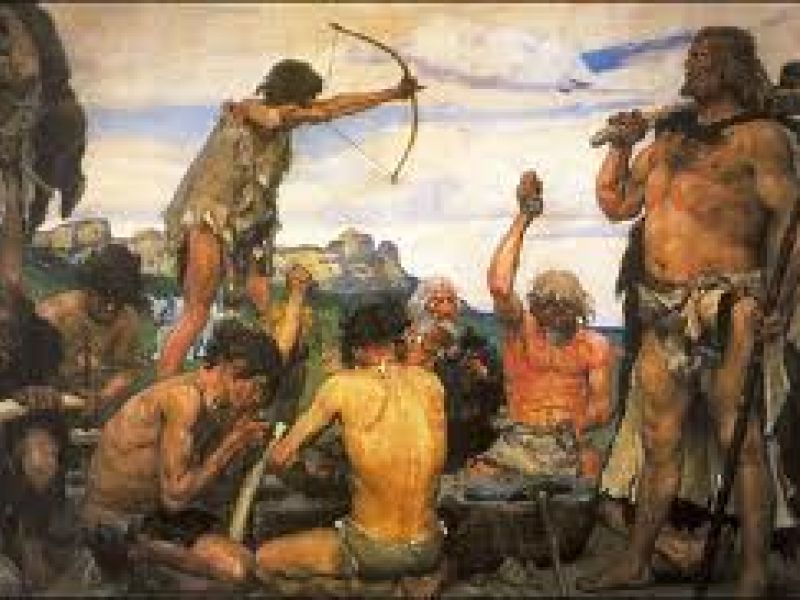 The period began in 5th millennium BC. It was the period of rising of stone processing technique. The more specialization in the production of tools happened during this period. Along with the improvement of technology of pressure retouch, emerged the new technological methods of stone processing: grinding, drilling, sawing: all difficult-used types of stone, manufactured stone axes, hoes, grinding stones, mortars and pestles.

The important feature of this Era was the emergence of cattle breeding and agriculture, so called productive economy that replaced the assignment of finished products of nature, gathering and hunting. The emergence of new types of farms had a great importance for the development of human society. It expanded the range of employment rights and at the same time qualitatively changed the nature.

All the further history of many thousands of human economic activity has pretty much the story of development, improvement of these two forms of economy. The level of development of productive forces, achieved by ​​primitive population in the Neolithic, led to the emergence of other cultural and social innovations. The beginnings of mining and weaving emerged in the ancient population of Kazakhstan, it already know pottery.

Currently, on the territory of Kazakhstan there are more than 500 Neolithic and Eneolithic (Cooper age) monuments, but the vast majority was investigated selectively. Neolithic camps in their nature of locations is divided into four types: spring, river, lake and cave. Usually on camps of river type and lake types contain a significant number of finds, suggesting a persistent or long stay here man. Basic equipment of such camps is the knife-like plates and products for them.

In Kazakhstan most common is the spring camps, often temporary, seasonal place of wandering hunters. One of the features of Neolithic monuments of desert- steppe Kazakhstan is due to the reason that the most of them is open type camps (ground). In all parks were found tools from stone local materials: arrowheads and spears, axes, chisels, knives and scrapers. Variety of raw materials contributed to the development of various techniques of processing and refinement. Neolithic camps of Kazakhstan forms several territorial groups may appropriate to areas of habitat of related tribes close to each other in culture.

Neolithic camps in the Karaungur cave is located on the right bank of the same river, 1.5 km to the north of Karaungur, Tulkubas district of South Kazakhstan region, or 43 kilometers northeast of the city of Shymkent. The cave itself located at a height of 7 m from the riverbed. Width at the entrance of 20-25 m, height of about 2-16 m cave consists of two rooms: the front, 20 m long and distant - 9 pm During excavations in 1959 by H. Alpysbayev it got quite a large collection of cultural household remains (stone and bone, pottery, animal bones and so on)  of the oldest inhabitants of the cave.

Onagers, bears, deer, gazelles, deer, wild boars, horses, wolves, bulls, partridges, pheasants and turtles were the objects of hunting. This is evidenced by the fossil remains found in the cave.

In West Kazakhstan there is only one option of Kelteminar culture — west Kazakhstan, a long time ago offered by S. Tolstov. Kelteminar culture dated back to the end 4th and beginning of 2nd BC, and covers a large territory of Kazakhstan and Central Asia. Stone industry characterized by preparation in the forms of plates and microplates medium sized, fragments of plates and flakes. As an example, Neolithic camps and locations, which were found in 1989-1990 period of time in Atyrau region: Shatpakol, Kulsary 1-5, Shandyaul, Kyz-Emshek, Kaynar,   Zhylan-Kabak, Koykara, Sarykamys, Shayandy etc.

Location of Shatpakol is 12 km to the north of Shokpartogay Emba district. Stone products – knife-like plates, flakes and pottery fragments were found on a small slope near the spring. Kulsary camps 1-5 are around town Kulsary. Almost all of them are destroyed by the construction of roads and the gas pipeline. Among the many industries the knife- like plates with and without retouch, scrapers on flakes and plates, knives, tanged arrowheads sided treatment, ankoshi — guns with side notches, cleavages like nucleotide and prismatic cores. Most of the pottery fragments without ornament, only some have depressed horizontal lines from which go straight down or vertical lines.

Shandyaul located in 22 km. in the north-east from the village Kulsary. Stone artifacts were found near the modern cemetery of Akkiztogay village. Among them there are scrapers on the plates for the two-scrapers, flakes and ceramics.

Location Kiz-Emshek was found near Iman Kara Mountain, 37 km south-southeast from the train station Zhanterek. On top of the mountain picked cores prismatic nature of plate like knife retouched along the edges of the back side and fragments of pottery. Such artifacts were found in a high cliff of Kynar River.

Zhylan-Kabak and Koykara locations characterized by the existence of fragments of ceramics with ornaments “small fir-tree” and small “comb”. The stone tool is identical to the industries of above-mentioned camps.

Camps Sarykamys and Shayandy were found on the dunes about 3-4 km. on south of the Sarykamys village of Emba district in Atyrau region. It was collected a large number of knife-like blades with no trace of disposal. Also several plates with retouched by the backrest, guns with recess on the plates and flakes. On fragments of pottery there is an ornament with oblique cuts, depressed into vessel, horizontal lines and geometric shapes in the form of triangles. Painted pottery is absent.

Findings belong to the Neolithic time, were revealed in an abandoned area in Satchy-Kyz on the second terrace above the floodplain right bank of Kyzyl-Su River, 2-2.5 km from the Belokamenka village in Semipalatinsk region. At this point the terrace is cut out by the slate and quartz.

Camps Kyzyl-Su is located on a high plot, on the bottom of which has a small spring. Near to it, runs deep ravine, which perpendicular to the floodplain of the river runs, at the bottom of which was discovered a triangular plate with retouches by the side of edges and a flake of dark siliceous rocks that has the impetus to finding a camps space. Stone products (they are more than 100) are collected on the surface.

Distribution area of findings is 30 x 30 m.  In two places was placed pit, 1 x 0.5 m sized. In the pits observed following stratigraphy: turf, with 0.05 m power;  gray-yellow sandy with fine gravel, with the power of pebbles with small boulders and coarse sand.

The collection of lifting up materials consists of nucleus, arrowheads, scrapers, knife-like plate, microlites and wastage of production. Nucleuses are prismatic cut, amorphous and small sized. There are raw prepared nucleuses.

The major number guns are end scrapers on the plates with oval working edge. Some of them have retouched sides. There are scrapers with high form. The arrowheads are treated two-sided and small, also were found the prepared arrowheads. Some products have plates with a blunt edge, which have been treated with two or one side and small in size. Products are mainly made ​​of jasper, chalcedony and opal.

On the territory of Kazakhstan were discovered so far a few Neolithic burials, mostly in northern Kazakhstan. None of the graves has any external signs on the surface. Arrowheads were laid with bones in all the graves, indicating not only that our ancestors were hunters, but also the fact that they engage in frequent military conflicts. In burials have little pottery, some of them have none.

Close cultural and economic ties that existed between hunters and fishermen, vividly reflected in the archaeological materials. Most clearly, they can be traced to the tribes of Kelteminar culture or Kelteminar cultural community, who lived in the northern regions of Central Asia. Vividly it was shown in all the tribes of the South, especially in Western Kazakhstan.

The chains of ancient contacts go far to the north and north-west in Urals and Western Siberia, appearing in features and forms of flint tools in the types of ornamented pottery.

The culture of Northern and Eastern Kazakhstan tribes, which detects signs of similarities with the culture of the population of Central Asia, at the same time, was closer to the Altai and Baikal Stone Age tribes. Retaining the specificity and uniqueness of cultural traditions, Neolithic tribes of Kazakhstan has evolved in close cooperation with names of neighboring regions and areas.

3.  H. Alpysbayev. The meaning of Paleolithic for subdivision of the Paleolithic Anthropogenic deposits //Culture of ancient pastoralists and farmers of Kazakhstan. Almat-Ata.1969. page 119.

11.   Z. Samashev, Zh. Taymagambetov and others. Report of West Kazakhstan’s archeological expedition in 1989// Archives of the Institute of Archeology named after A. Margulan, National Academy of Science of Kazakhstan.

© Institute of History and Ethnology named after Sh.Valikhanov Committee of Science of MES RK, 2013.