Problems of innovation modernization of economy regions in Kazakhstan 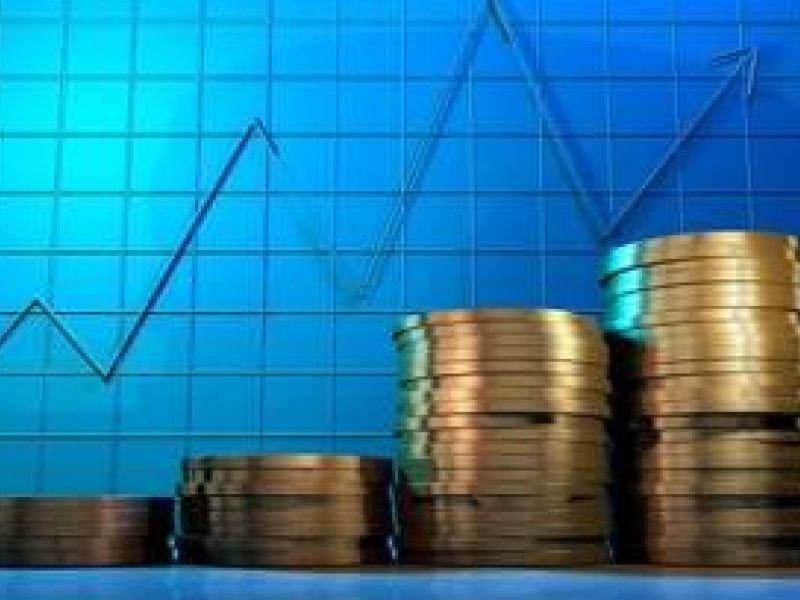 Kireyeva A. Anel, Institute of Economics of the MES of the RK,

Abstract. This article highlights the main problems of modernization regions in Kazakhstan associated with spatial constraints, in the difference level of development regions and the low level to attract qualified personnel in innovation. The survey revealed that in Kazakhstan there are substantial differences in the level of innovative potential of regions. Based on this analysis, proposed a model of innovation cycle, which takes into account the formation and  introduction of an new technologies in the region.

Today problem of diversification structure economy in Kazakhstan and cut down its dependence from natural resources is one of the main tasks for economic geography and regional economy. Even in safe years before crisis it was clear that economic growth should be provided with transient factors and that it is necessary to take steps in the direction of transition of Kazakhstan to the steady growth based on modernization and innovations. The global financial and economic crisis which has begun at the end of 2008 shows importance of this problem, and also need to provide developments of economy regions in Kazakhstan on the basis of innovative modernization.

So it should be noted that the active participants in the innovation are not only state but also regions.As rightly noted A. Scott and M. Storper that "cities and regions ... are essential foundations of the development process as a whole " [1]. The process of globalization of economic activities makes their own changes to the development of innovative processes at the regional level. The essential components of the theory regional research in the field of scientific and technological development are connected with many special sections of the economic and social theory.

Long ago regional science conclusively showed that spatial inequality emerges as an objective effect of concentration of competitive advantages in certain territories and lack of these advantages in others. The tendency toward concentration of economic activity in territories with conditions favorable for businesses was discovered by G. Myrdal in the middle of the 20th century [2]. Core-periphery theory (the theory of polarized development) by J. Friedmann [3] has become an important contribution to understanding spatial development patterns.The model shows that the underdeveloped and limited of regions in the resources will inevitably become a hindrance to development of innovation and modernization of the country.

Thus it is clear that there are spatial barriers for the modernization of economy in Kazakhstan. These include: the huge distances, vast areas with poor living conditions and poor infrastructure, low population density and sparse network of cities. However, these same barriers exist in some other countries, however, these countries are developing successfully.

The existing territorial limits are a characteristic feature of the current level of development of the regions in Kazakhstan, this is the starting conditions for modernization. It is important to understand what is the relationship of regions with different economic and human resources, what is the balance of the developing and regressive areas, what the effect on the possibility of modernization the spatial factors of economic and social development. That why I propose to evaluate these initial conditions:

2)  in the Republic of Kazakhstan has formed a hierarchical system of urban centers, which can make the modernization in the small towns and in the periphery, but they are not able to upgrade all of the country; also in Kazakhstan are very few large cities;

4)  regional policy of the state is weak and has not the priorities and objectives, major cities is recovering faster than the underdeveloped regions.

Thus Kazakhstan follows the path of developed countries, where the peak of inequality fell in the first half of last century. Attempts to make strong underdeveloped regions can only temporarily solve the problem. So, I think the key to solving the problem of modernization of the individual regions – finding and developing the competitive advantages in medium and underdeveloped regions of the country in conjunction with support measures of alignment of the social and economic disparities between the territories.

Kazakhstan has a vast territory, so in many regions there are uneven research and development (R&D), elements of which form the innovation system and the influence of modernization. Innovation of the region – is the region's ability for self-renewal, adaptation for the changes and generation products of scientific and technical progress [4].

In this process there is a constant transformation, which leads to different structural changes in the economy of a territory. They show the change in the proportions between the elements of the territories and changing their composition, that is in essence, are the basis for the reform of economic development. It would thus be of interest in analysis and evaluation of innovative capacity regions involved in regional innovation process.

So Table 1 shows the level of innovative activity in the regions of Kazakhstan.

These data indicate that two-thirds (2/3) of the regions have positive values in the innovative development for the analyzed period (2007-2010), and one-third (1/3) regions have a negative values. Positive values ​​indicate that data objects can be classified like innovation active regions. However Akmola, Almaty, Mangistau and North-Kazakhstan regions show a very low level of innovative activity. This fact indicate for a low level of innovation development of the region or on the incomplete use of existing innovative resource.

I  think that should be against a group of regions with low levels of innovative capacity use measures which should be directed to:

• improving the technological level of regional production through the introduction of innovative technologies and modernization in purpose to increase the competitiveness of the region;

·  tax incentives for the development of scientific and innovative areas of the region;

·  involvement of finance and development of the investment management in the regions;

The proposed measures should be let regions with low levels of security to use the innovative achievements of the leading regions, and thus contribute to the modernization territories. So, modernization is faster in regions, where is better conditions for the diffusion of (development) innovations – the higher the concentration of population, more developed infrastructure and less of economic distance, also low level of institutional barriers. The necessity to reduce all barriers spatial development is obvious, but they are long-term and stable nature. Is very difficulty to  effected  changes for the space, that why the choice of directions to stimulate modernization in Kazakhstan limited to fairly low levels of capabilities, especially under the influence a deteriorating world market conditions and growth of problems in the economy.

Today stayed unsolved problem of staffing for innovative economy. Innovative development of the country is impossible without highly qualified personnel such as engineers, developers and innovation managers. The absence of the required number these specialists in government and among entrepreneurs is barrier for the innovation development [5].Today Kazakhstan is presented as one of the most highly educated countries in the world, but in terms of economic development of the republic a little behind most countries. From a quantitative point of view the scientific potential of qualified specialists does not meet the needs of innovative development. The data the of number of the personnel occupied by researches and development on areas can be seen in Table 2.

Table 2. Number of the personnel occupied by researches and development on areas 2007-2010

According these data of the human resources is not sufficiently used in science and technology. During the analyzed period the number of employees is almost unchanged. This table shows that in developed regions of the observed increase in staff. However, in regions such as Aktobe, West-Kazakhstan, Kyzylorda and South-Kazakhstan has been a significant reduction of personnel. So, general condition of science in Kazakhstan demands to reform the current system of innovation to attract staff for the regions.

Regional economic policy should focus on creating an enabling environment for innovation stage in less developed regions, such as the creation of educational and scientific centers. It should be noted that in localized areas creates a significant proportion of the value added of country, and thus regional conditions largely determine the competitiveness of manufactured goods [6]. So, to support

innovative activities is reasonable to creation and development such structures as industrial parks, technology incubators, data banks of innovation [7].

In general, I propose model of the innovation cycle in the region, which includes the separation of the types of innovation and the main types of process innovation – technological and managerial. This model is shown in Figure 1. 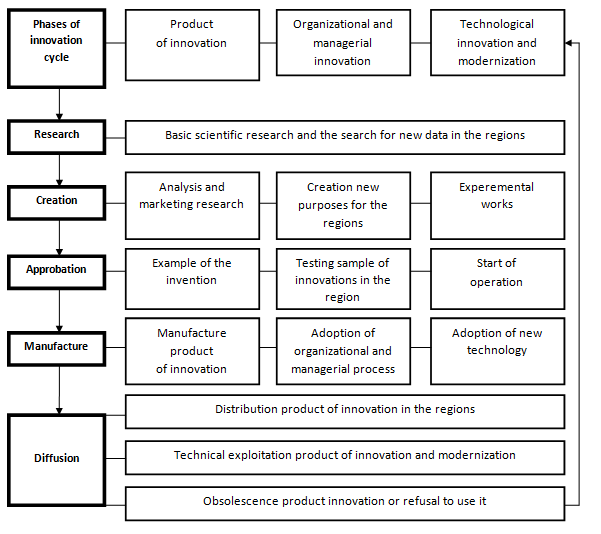 So, this research has shown that in the group leaders presented the most developed regions in the socio-economic plan. Therefore in these regions proposed the creation and development of innovative areas. And the innovation process within the individual branches of the innovation economy could be faster thanks to special institutional, infrastructural and human potentials.

1) support urban centers, creating innovation and transmitting them to the periphery;

2) development of infrastructure, which allows to reduce the economic distance;