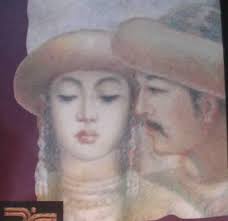 Kozy Korpesh and Bayan-sulu is the most common lyric poem of the Kazakh people. The first record of one of its versions was made for A.S. Pushkin and preserved in his archive. At the end of the last century, the famous explorer of Central Asia and Kazakhstan G.N. Potanin wrote:

" ... The favorite story that knows the whole steppe from Orenburg to Zaysan, and top Kazakh ethics, is the story of Belle Bayan-Sulu, who fell in love with Kozy Korpesh ...”

The story of a tragic love, it was passed down over the centuries by word of mouth and could be compared now with the famous love story of Romeo and Juliet, it went through several editions in the Kazakh and Russian languages.

The readers have a prosaic versification of lyrical and epical poem.

Use of materials for publication, commercial use, or distribution requires written or oral permission from the Board of Editors or the author. Hyperlink to Qazaqstan tarihy portal is necessary. All rights reserved by the Law RK “On author’s rights and related rights”. To request authorization email to mail@e-history.kz or call to (7172) 79 82 06 (ext.111)
Қазақша Русский English
MOST READ
Month Year
Recorded history of Kazakhstan. Part 2
Heroic mothers of the great steppe
How had the World War II been started?
Philosophy of the Emblem
14 monuments at Tekturmas
The rural akims: the country's hope is in the elections
Kazakh historical drama Tomiris premiered in Istanbul
Stolypin about the worries and hopes of immigrants to the Kazakh steppes
ALASH IDEA IS THE PROTECTION OF KAZAKH STATEHOOD
A tireless explorer of the Kazakh land
SWITCHING TO THE LATIN ALPHABET – UNITE ALL KAZAKH PEOPLE
Kunaev Dinmukhamed Akhmedovich
People who eat horses will kill you
Materials on theme
State program of the Republic of Kazakhstan "Cultural heritage" the «БАБАЛАР СӨЗІ» Series in 100 volumes
Dilmukhamedov Yeltok Dilimbetovich
Yurt
In minutes of break. Second left - Nursultan Nazarbayev. 1960