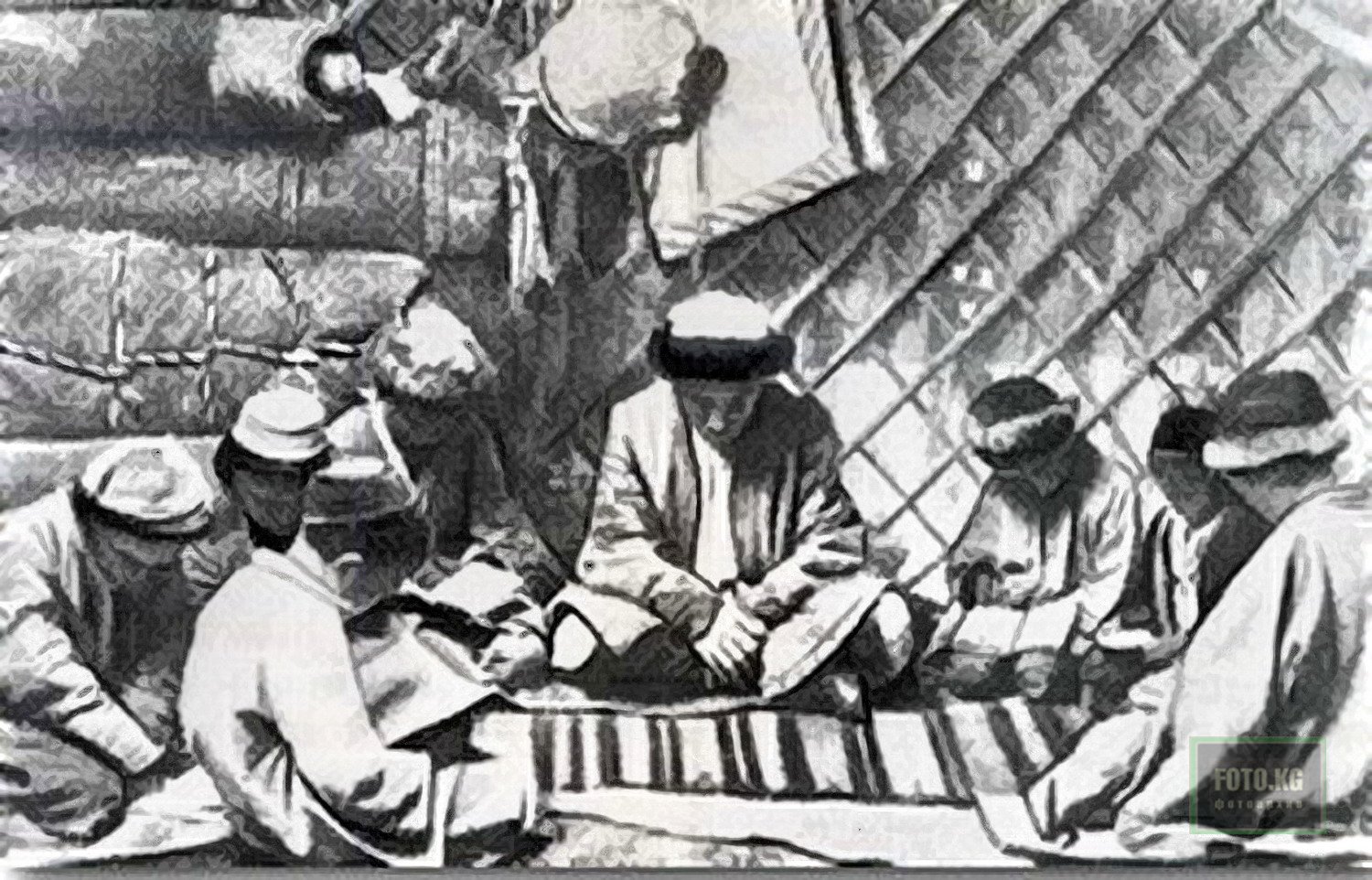 Expansion of school education and shifts in social and economic shape of the Kazakh society, raised a question of training of experts very sharply.

Literacy of the population. Almost to the middle of the XIX century training of the Kazakh children was carried out in мектебах where the mechanical zazubrivaniye сур the Koran was considered as the main thing. Functions of the teacher were carried out mainly by the mullah, as a rule, not having ideas about curricula and a training technique, Muslim мектебы boys that became one of the reasons of high level of female illiteracy generally visited. For example, at Muslim schools of Vernensky, Kapalsky and Sergiopolsky districts 47,5 thousand boys and only 17,3 thousand girls were trained in B1884 of. B1895 of. "The Kyrgyz steppe newspaper", describing a lesson in мектебах, I wrote: "From a yurta where children study, infernal shouts rush. Each pupil cries out the lesson... Such teaching proceeds about four years. After this term pupils take all course of the doctrine and end it, knowing nothing, remaining the same ignoramuses what were".

Scandalous illiteracy of the population of Kazakhstan was found during census of 1897 though it fixed first of all ability interrogated to read in Russian. Literacy in the native language was fixed only in case the interrogated wasn't able to read in Russian. However materials of census didn't reflect level of literacy of the separate people. According to census of 1897 of only 8,1% of the population of edge were among competent, literacy of men made 12%, women — 3,6%. Rather high level of alphabetical literacy was observed in northeast provinces where the main part of the resettlement population lived.

Serious growth of level of literacy of the population of Kazakhstan didn't happen and at the beginning of the XX century: from 10 children of school age only one attended school. If in the central regions of Russia at the initiative of the progressive intellectuals Sunday schools, zemstvoes were engaged in eradication of alphabetical illiteracy, in Kazakhstan business further words didn't go. Those Sunday schools which opened in the cities, covered a minute quantity of people.

School and professional education. In Kazakhstan national education developed in two directions: religious and secular. The religious direction represented мектебы and the madrasahs containing on means of parents. Training was conducted on the Arab alphabet. In the XIX century. C.Valikhanov with bitterness wrote about a difficult situation aulny мектебов where the Tatar mullahs edified generally: "Terrible fanatic, dead scholasticism and any real thought".

At the beginning of the XX century мектебы ceased to satisfy the increased inquiries of time. Movement for reforming of the confessional school as which organizers dzhaddist acted began. They suggested to replace a bukvoslagatelny method of training sound, proved need of teaching in мектебах secular disciplines — arithmetics, geography, natural sciences, history, etc. There not less novometodny мектебы didn't gain a wide circulation.

In system of religious education the madrasah had a great influence. They prepared mullahs, teachers мектебов and functioned, as a rule, at mosques. Depending on type of madrasah training term — from three to four years was defined. Along with Islam studying pupils received data on philosophy, astronomy, history, linguistics, medicine, mathematics.

Educational institutions of secular character opened after accession of edge to Russia. They prepared officials for the colonial device, translators, teachers, physicians. So, in 1786 in Omsk the Asian school, in 1789 — governmental school opened at an exchange yard of Orenburg. These educational institutions trained children, including and Kazakh, to professions of the translator, the clerk. Military experts and administrative officials prepared the Neplyuevsky military school opened in 1825 in Orenburg and Omsk military school, based in 1846.

The first Kazakh Soviet school started functioning since 1841 in the Bukeevsky Horde at the initiative of khan Dzhangir. Pupils of this school studied Russian, mathematics, geography, east languages, and also religion — Islam. The seven-year school at the Boundary commission in Orenburg became the following educational institution for the Kazakh children.

In 1850 at the Orenburg Boundary commission other secular school opened. In 19 years of existence it let out 48 people. In 1857 the school was graduated successfully by I.Altynsarin.

In the last third of the XIX century city schools, parishional schools, pro-gymnasiums, the Russian-Kazakh and Russian-native schools and schools, aulny schools and schools of initial literacy opened. They contained at the expense of the state and carried out a role of initial educational institutions. In the Bukeevsky Horde starshinsky schools were created. The Kazakhs who ended a course of two-cool school and have passed examination in teacher's seminary for a rank of the teacher were teachers in them. From 1898 to 1914 the number of elementary schools in Kazakhstan grew with 730 to 1988, and the number of pupils in them — from 29,1 thousand to 101 thousand people.

Slowly the network of average educational institutions — real schools, man's and female gymnasiums extended. B1914 of their was 12 numbering pupils of 4 thousand people.

Development of female education became the progressive phenomenon directed by school business. Thanks to I.Altynsa-rin's diligence in 1887 the female school in Irgiz was open. In 1890 — 1896 the Russian-Kazakh female schools in Turgaye, Kustanai, settlement Karabutak, in Aktyubinsk opened.

By 1896 in them 211 girls, including 70 Kazakh women were trained. The main obstacles in a way to wider circulation of female education Kazakhs had position of women deprived of civil rights and reactionary traditions of Islam.

As a part of pupils of initial and average educational institutions the share of the Kazakh children was insignificant. So, in the Vernensky man's gymnasium in 1911 316 Russians and only 10 Kazakhs were trained. In Syr-Darya area, according to 1912, there were 56 Russian-native schools in which 3 thousand children of indigenous people were trained that made 2% from the total number of pupils.

The tsarism considered school education as one of effective means of russification of ethnic minorities. "An ultimate goal of education of all foreigners living in limits of our fatherland — I wrote in 1870. The minister of national education D.A.Tolstoy — it is indisputable, there has to be a russification and merge to the Russian people". Almost in all educational institutions training was conducted in Russian, the history and literature of indigenous people weren't studied.

The scar in the history of education and national school was left by Ibray Altynsarin. He was born in the Kustanay area. Having early lost the father, it was brought up at the grandfather — Biya Balkhozhi Zhanburchin, the army foreman of the Orenburg boundary commission.

After leaving school of Altynsarin about three years I worked as the clerk for the grandfather, and then in the Orenburg board as the translator. In 1860 the regional board charged to it to open elementary school for the Kazakh children in the Orenburg management (Тургай) and appointed the teacher of Russian.

Inspired with educational ideas, it drove about on auls, explaining to the population value of secular education. Having raised at the Kazakh population funds, it started the school construction which solemn opening took place on January 8, 1864. In school of a duty of the senior assistant to the district chief and a duty of the district judge. As obliges I happened in auls, I participated in elections of the volost manager and aulny foremen. On elections I tried not to give a course to briberies, bribery and abuses. Dissatisfied bye made about it complaints in regional management, to the military governor and the Minister of Internal Affairs, accusing him of violation of the rules of the elections provided by "Temporary situation" 1868.

B1879 of of Altynsarin received appointment to the post of the inspector. On its initiative and with direct participation the network of national secular schools, in particular the central schools in all district cities of area was created in Kazakhstan. For this purpose it went on the Kazakh auls of the Turgaysky Region, raised funds at the population, and then opened two-cool Russian-Kyrgyz schools in Irgizsky, Nikolaevsk, Turgaysky and Iletsky districts; I completed them with teachers and pupils. Altynsarin's special significance I attached to the equipment of schools, creation of libraries at each school. It is a lot of forces and energy it spent for opening of vocational and agricultural schools, attaching exclusive significance in training of specialists from the environment of indigenous people.

I.Altynsarin wrote two manuals for pupils of the Russian-Kazakh schools: "The Kyrgyz anthology" and "the initial management to training of Kyrgyz in Russian". In transfers from the Russian classics, in original works in the Kazakh language it propagandized ideals of democratic enlightenment, fruitfully worked for development of national literature and culture, in the field of formation of the Kazakh literary language.

Being the figure of a certain era, Altynsarin couldn't avoid known contradictions, limitation in the outlook. As well as all educators, it overestimated a social reformative role of education.

As the educated person, Altynsarin was interested in ethnography, collected and systematized oral national creativity of Kazakhs.

Expansion of school education and shifts in social and economic shape of the Kazakh society, very sharply raised a question of training of experts. The Turkestani teacher's seminary founded in 1879, and the Orenburg Kazakh teacher's school (1883) were the first professional educational institutions

The provision on the Kazakh teacher's school, approved by the State Council in 1880, provided annually to allocate 17580 rub for the maintenance of school.

In XIX century. Agricultural and medical assistant's schools opened, from where there were experts with secondary education. Only one Bohr forest technical school acted from 1889 to 1917 163 experts.

Use of materials for publication, commercial use, or distribution requires written or oral permission from the Board of Editors or the author. Hyperlink to Qazaqstan tarihy portal is necessary. All rights reserved by the Law RK “On author’s rights and related rights”. To request authorization email to mail@e-history.kz or call to (7172) 79 82 06 (ext.111)
Қазақша Русский English
MOST READ
Month Year
How had the World War II been started?
Armenians and their kinship with the Kazakh people Today is Kazakhstan Police Day Doctors-comrades-in-arms of A. Bukeyhanov Karaganda coal and the merchant Ushakov The great son of the great steppe Kassym-Jomart Tokayev sent a telegram to UN Secretary General António Guterres Living for the Kyrgyz account Kazakh dissidents: Amangali Kenzheakhmetuly, known as the “Gang” The excavation works in the town of Syganak A death of Ulugbek History of pandemic in Central Asia How had the World War II been started?

Materials on theme
Text of statement of N.A. Nazarbayev at constitutive conference of the International Fund for Saving the Aral
Unity in Diversity
"The Kazakhstan contents" in system of industrial and innovative modernization and strengthening of the economic sovereignty
Problems of terminology in Kazakh language