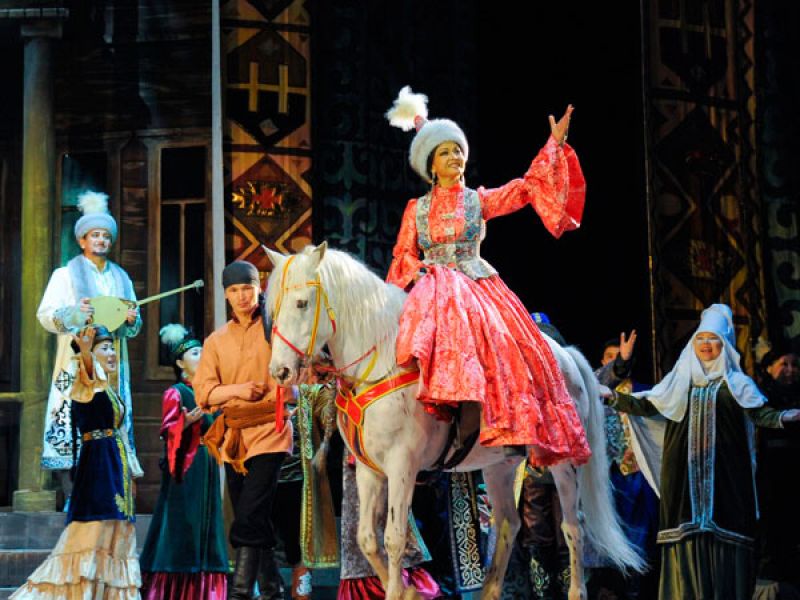 In the last years more than thousand plays have been performed in the theater industry, including thirty nine new productions, such as the opera Tannhäuser by Richard Wagner, the musical Astana!.. by Almas Serkebaev, the rock musical Let Me Go to the Jungles (Mowgli) by Rudyard Kipling, the ballets Baiterek by Adil Bestibaev, The Eternal Light by Serik Yerkimbekov, Romeo and Juliet by Sergey Prokofiev, and Red Giselle by Boris Eifman. New plays include stage shows Tiger Jumps and Dedication to Master by G.Yun and O.Lee, March First by Z.Kim, and other plays based on works of the world’s classics and contemporary literature.

The latter comprise The White Cloud of Genghis Khan and My Popular in a Red Scarf by Chingiz Aitmatov, Abay and Yenlik-Kebek bu Mukhtar Auezov, An Unexpected Meeting by Takhavi Akhtanov, Marriage by Nikolay Gogol, A Lost Star by N.Oraza, Falling Sky by Alexander Ostrovsky, The Cherry Orchard and many others. On-stage performance group demonstrated their mastery at the International Theater Festival of the Central Asia in Almaty, and the Republican Kazakhstan Theater Festival devoted to the 70th Anniversary of Victory in the Great Patriotic War and 100th Birthday Anniversary of Baurzhan Monyshuly in Taraz. They also go abroad to participate in a variety of theater competitions and festivals. The Kuanyshbaev Musical and Drama Theater’s play Karagoz by Mukhtar Auezov became a fantastic success at the Fajr International Festival in Tehran. The rock opera Christ Passion of the Akmola Regional Russian Drama Theater won a special award at the Fifth Theater «Naz» honorably represented Kazakhstan at the International Festival of Fringe Theaters in Cyprus.

It was the Kazakhstan’s President Nursultan Nazarbayev who initiated creation of the musical, while the main idea of the story was suggested by Mukhtar KulMuhammed: a young Kazakh man and a Japanese girl meet in Astana, fall in love with each other and find their happiness in this city. The play was recognized the best in the Kazakhstan Ministry of Culture competition «The Independency Song». The Republic of Kazakhstan Ministry of Culture has country- and international level competitions and festivals to promote the development of the Kazakh arts and bolster Kazakhstan’s reputation worldwide. These events are gaining resonance among the global community by asserting Kazakhstan as a country providing as all-round support to the cultural sector.