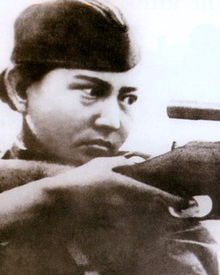 Alia Moldagulova was born October 25, 1925 in the village of Bulak Hobdinsk district of Aktobe region. As a child, lost her parents. The girl's mother probably died in the illegal collection of grains on the collective farm during the famine, because the father did not live with the family and possibly prosecuted by the authorities, as a descendant of bai, but still not arrested and was not sitting in jail. With eight years Aliya lived in Alma-Ata in his uncle's family Aubakir Moldagulova.

In 1935, Uncle Aubakir entered the Military Academy of the transport. Family MOLDAGULOVOJj together with Alia moved to Moscow. A few years later they moved to Leningrad, where she was transferred Academy. In autumn 1939 my uncle, for family reasons, made a 14-year-old Alia in a children's home number 46. All students of this orphanage were in Leningrad school number 9 (now number 140)

In June 1941, with the beginning of World War II, the family was evacuated uncle, and Alia remained in Leningrad. September 8, 1941 began the blockade of Leningrad.

In March 1942, together with the orphanage was evacuated from besieged Leningrad in the village Vyatskoe Yaroslavl region. At the end of 7th grade school Vjatskoj Alia 1 October 1942 entered the Rybinsk Aviation College, but three months later filed a petition in the Red Army with the request to send her to the front. December 21, 1942 Alia Moldagulova was formally expelled from the number of students in college due to his front.

In May 1943, was created in Moscow Central sniper training school for women. Aliyu MOLDAGULOVOJj identified in the first set. February 23, 1943 girl cadets took the military oath. In July 1943, Alia, along with several of her friends, classmates was directed by a sniper in the 54th Infantry Brigade (22th Army, 2nd Baltic Front).

During his military service Aliya was recorded following the accident. Five German soldiers, seeing a female snipers walking toward them on the neutral zone, set up an ambush. However, the first time to shoot Alia, another two snipers killed Zina and Nadia, the two remaining enemy soldiers escorted the girl was brought to the command post.

On its official account of 78 killed soldiers and officers. Was mortally wounded in battle and died January 14, 1944 Novosokolniki north of the city, being wounded in the arm by shrapnel mines involved in close combat with German soldiers, was again hit by a German officer, who was also destroyed, the second wound was fatal. Before his death, Alia wrote a letter to his sister of Sapure.