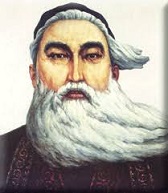 Born in 1823 in Bukeyev Horde, in the tract Zhidelev (now a district of Zhanakala, West Kazakhstan region), in a yurt poor Sagyrbaya. From an early age engaged in playing the lute. Early in the boy appeared propensity for music did not cause his father approval. Mother Kurmangazi Alka person and individuality and a strong will, on the contrary, shared the love of a son for music and supported him. At the age of 6 years under the pressure of dire necessity Kurmangazi was given to the shepherds. In his native village Kurmangazi enthusiastically listened to the visiting kuishi, among which stands out kuishi Uzak who noticed a young Kurmangazi a special interest in music, and he predicted a great future. At the age of 18 years Kurmangazi leave his native village and starts wandering life wandering kuishi. Together with legalize it participates in the competition, develop their skills and put forward a series of outstanding dombra players.