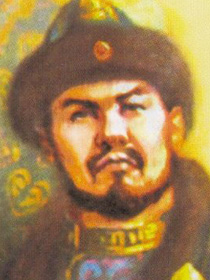 Kasym Khan, Kasym Beg was the leader of the Kazakh Khanate from about 1511 to 1523. He was the son of Jani Beg Khan who was one of the founding fathers of Kazakh Khanate by escaping with his confederacy to Moghulistan from the Uzbek chief Abul-Khayr Khan. Kasym Khan is viewed as the first leader who united the Kazakh tribes. Although, Baranduk Khan was the Khan of the Kazakhs, control of the government was in the hands of Kasym Khan. Eventually he sent Baranduk Khan into exile who died at Samarkand. Kasym Khan had a brother named Adik Khan who was married to Sultana Nigar Khanim, daughter of Yunus Khan of Moghulistan. When Adik Khan died, Kasym Khan took her as his wife.