Home Special projects The story of one photo. Saduakas Turezhanov

My great-grandfather Saduakas Turezhanov is the veteran of the Great Patriotic War. He was born on June 16, 1916 in the village Kandoz located near the city of Turkestan of the Southern Kazakhstan area.

In 1938 when Sadukas Turezhanov turned to 22, he was conscripted to the military service. He began his military path from participation in the Winter War (military conflict between Soviet Union and Finland).
When the Great Patriotic War began in 1941, my great-grandfather fought in the forefront against fascists. In 1942 during unequal fight, being seriously wounded, the great-grandfather was taken prisoner by the Germans.

After two terrible years spent in Nazi concentration camps, he manages to run together with two companions. It was very hard and painful to him to remember these difficult years. After escape they had to hide from persecutors in the woods and swamps. There was time when they were waist-deep in the swamp to protect themselves from German dogs. Thanks to their persistence they finally managed to reach the Soviet fronts.

After that the great-grandfather continues fight against fascist in Soviet Army. During the fight he was wounded several times and was hospitalized. After war he continued his military service in military commandant’s office in one of the cities of defeated Germany. 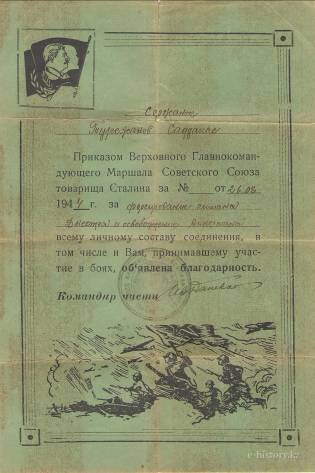 After arrival in his village the great-grandfather began to work. Together with the fellow villagers he started to rebuild destroyed farm. Before retirement Saduakes Turezhanov worked at the cotton fields as the foreman and hydraulic engineer. Unfortunately, in 1997 he passed away, but memory about him and his feats remained. Our grandfathers and great-grandfathers had to go through difficult time.

We will never forget feats of ours heroes which they committed during the Great Patriotic War.