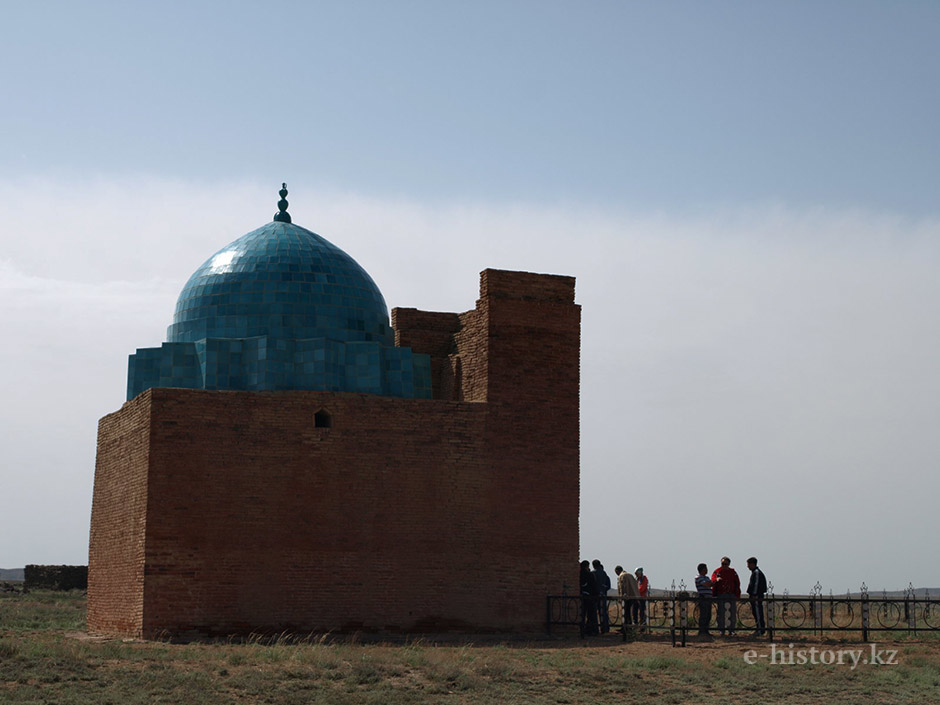 Dzhuchi khan is one of the well-known sons of Chingis Khan, he got the lands of the Kazakh steppe.

In the time of the governance on the territory of modern Kazakhstan Dzhuchi was considered to be local people, their language and culture. Also, he was famous for his good attitude to his subordinates. The confirmation to that is the information of the Persian historian, who lived in XIII century, Abu Omar Minkhadzh ad-din Osman ibn Siradzh ad-din al-dzhuzd Zhani. In his work “Taba kad-i-nasiri” he wrote the following, “Dzhuchi khan loved Kipchaks so much that the son of Kipchak or Mongol in Khorezm he never clumped”. Dzhuchi khan was the ancestor of Kazakh khans. When he died his corps was buried in Ulytau.

For today, we still have the possibility to view the mausoleum of Dzhuchi khan located in 50 km to the north-east of the Zhezkazgan at the shore of Kengir river.

Inscriptions saved on the walls of the mausoleum were left practically by all the tribes, which were subordinate to Dzhuchi: Oguzs, Argyns, Kipchaks, Kireis, Naimans, Konyrats and Kangly. On the tradition the mausoleum could be built nor early that was carried out the funeral repast in memory of the dead one. Dzhuchi khan died in 1227, the mausoleum relates to the portal-dome constructions.

According to the architects it has the rectangular form. It was built from burnt brick and gypsum. The area of the mausoleum consists of 9,55 for 7,25 meters. The grandiose portal decorates the mausoleum. The front arch of the mausoleum is pointed and the sides of it are rather hard, that’s why they bears the heavy weight. The sides of the portal had the ornament which is similar to baskur yurt. Baskur – the lace made of wool with the width 10 cm and more, which fastens kerege. The tiled bricks which were used for the ornament and is of 45*45 cm size. On these bricks besides the ornaments was an inscription.

In 1911 one of the prominent governors of Atbasar county collected the above described bricks and gave passed them to the museum. The upper part of the portal is like the parapet, and its bottom forms the friso from the brick remnants. The monument of history and architecture is also the ancient construction of Dzhuchi khan museum.

From the inner side, as if the bookshelves ascend two floors, which form the high dome, based on six-side drum. The inner dome is 8 m. All these findings are closely tied with the legend about the death of Dzhuchi khan, which became the basics of kui “Lame kulan”. “Son of a great Khan of the Golden Horde Dzhuchi, - says the legend, - hunting for wild kulans he was extremely engaged with the archery that the group of the accompanying people of his approximates was left far behind.

Tsarevich shot with sharp arrows of running kulans, and there was no mercy to poor animals. The leader of the herd of wild kulans famous as Lame Kulan, strong and brave, that did not fear even wolves (namely in the fight with grey predators once was injured its leg), unexpectedly turned around and attacked the hunter.

The attack of the Lame Kulan was so perky and furious that Dzhuchi fell from the horse, injured his neck and died on the spot. The herd of kulans freed from the persecution ran to steppe lands and ahead of all, as usual, ran the chief Lame Kulan. Among people still there tales about that the khan was buried. They say he was buried without the arm.

In other version, was found only one of  his arm and even little finger. The second grave belongs to the elder wife Dzhuchi. Her name Bektumysh, she was a daughter of younger brother of Togyryl khan, who ruled the khanate of Kereys. The grave was laid with bricks in which with Arabic script several times is written the word ykpal that means “influence”.

Dzhuchi khan mausoleum is the monument of history and culture and protected by the state.