Home News Other Zhalantos Bakhadur is the ancestor of Aiteke bi

ZhalantosBatyr was born in lands near Syrdarya in 1576, in tribal nomad encampments of Tortkara (Alimuly). He is the ancestor of Aiteke bi

"We recently visited Uzbekistan. And read the inscription: "This house of worship was built on the order of AlyshynZhalantosBakhadur" on the walls of some old buildings in Samarkand. "Who is this Zhalantos?" Zaure, Saule and GulimOrazbekovs.Almaty city. Name of Zhalantos often occurs in the historical written records and in the Kazakh folklore.

If the Kazakh folklore portrayed Zhalantos as the contemporary of Central Asian heroic epics like Manas, Alpamys, Korugly and Rustem, the famous scientist, corresponding member of the Academy of Sciences of the Kazakh SSR AkzhanManash in his book "Our Farabi" regards him as the contemporary of the great thinker. In fact, who is Zhalantos? What does he have to do with the mausoleums in Samarkand? Zhalantos was born in 1576 in the lands near Syrdarya. He is the ancestor of Aiteke bi. Father of ZhalantosSetkul-kazi, was a wealthy and influential man in these lands, and enjoyed great prestige. The authors of the four-book "History of World Architecture", published in Moscow, added the word "alshyn" to Zhalantos name. Its essence is as follows. Dynasty of batyr -alshyn, and then - tortkara. In many historical written records Zhalantos called false names, "SherіKypshaker" (Warrior Kipchak), "Assadsherі" (warrior Asad) (Asad – in Arabic "lion") "Asetserі" (Asetseri). 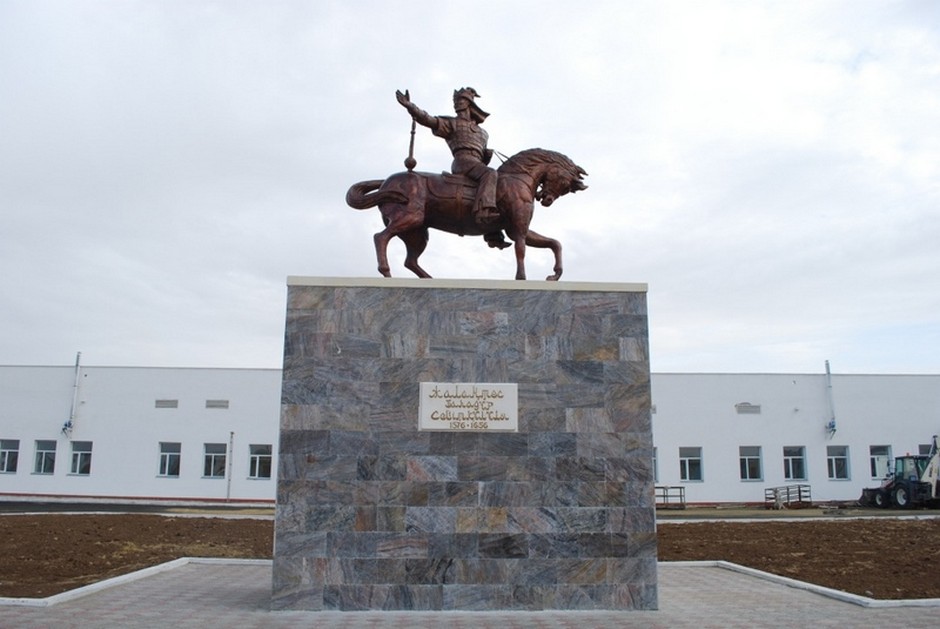 Zhalantos knew poverty from childhood. At the age of 12, he entered the service of Dinmuhamed Khan. In the mosque, he received his first education. As a result, Zhalantos very early learned science of management and military affairs. In 1593 at the age of 17 Zhalantos was elected biyof part alimuly dynasty. Author of the book "Tarikh-iKipchak" Kypchakhan describes Zhalantos military campaigns against the Persians. Tribes of Younger Zhuz in particular alshyns, freed from the influenceof the Lame Timur dynasty, make long trips to seize Kabyl, Meshkhetand even Herat. These trips of alshyns led batyrSeytkululyZhalantos. Very frequent victories of Zhalantos brought valuable gifts to Samarkand from India, Iran, Afghanistan, Kashkaria, Khorezm, Dzungaria, Tibet. But the war did not bring results. Because, in 1635 in the south-eastern border of Kazakhstan settled a new feudal state - Dzhungar Khanate and began its fierce battles against the Kazakh towns located along Syrdarya. Kazakh people was in a difficult position. The Dzungars made more frequent raids on the Kazakh land. It is known that the Kazakh national liberation struggle, which lasted half a century, was led by such batyrsas KarakereyKabanbai, KanzhygaliBogenbai, ShakpakJanibek, Kuttybai, Raiymbek, Shyngozha. In adolescence Zhalantoswas distinguished with resistance and military pragmatism, and received the title batyr. And for the successful battle with Dzhungars he was awarded honorary title - the title of "atalyk". In 1640, the army under the leadership of Zhalantos broke the dzhungars invaded the land of the Kazakhs. Later Zhalantos received the rank tumenbasy (Commander of 10000th troops). The Dzhungars military expansion did not stop and in the future, they carried out devastating raids on Zhetysu lands. Zhalantos came to the aid of his brethren, at the head of the 30-thousand well-armed troops from Samarkand. Zhalantos army helped to liberate Semirechyeof invaded Dzhungars headed by Batur-Khuntayiji. 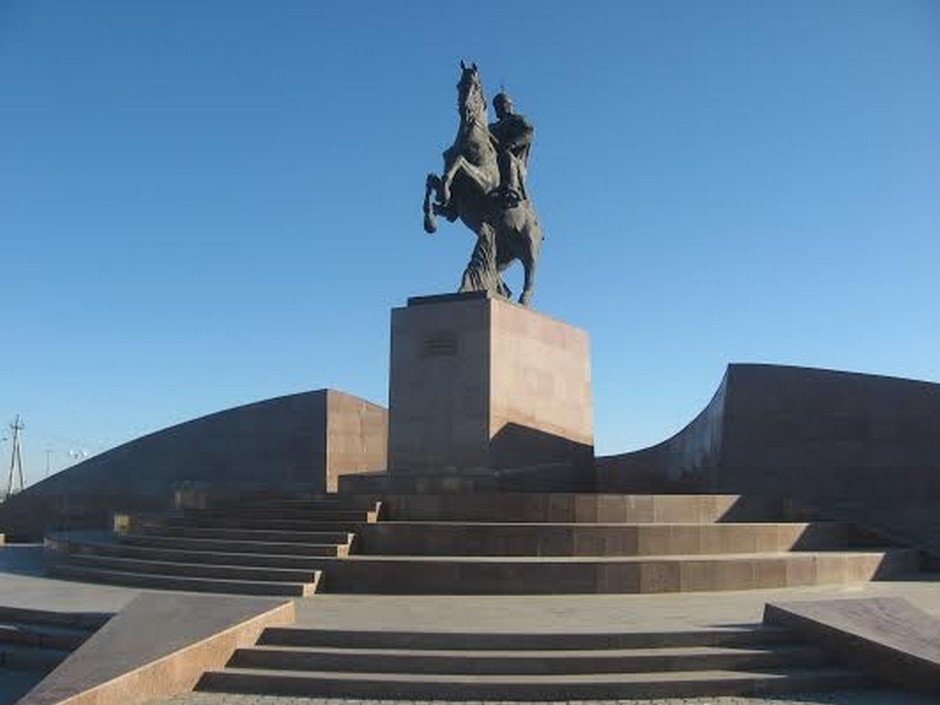 Zhalantos was known not only by feats of arms. He paid much attention to the construction of new buildings and supported the arts. For example, in the heart of Samarkand, on Registan Square Zhalantos built madrasah "Shirdor" ( "Lion madrassas"), which became a historical and cultural monument. Also he built in Samarkand madrasah "Tilla Kari" (decorated with gold). These architectural structures are the adornment of modern Samarkand and attract tourists from all over the world. In the history of architectural art of all the East these buildings placed high ranks in craftsmanship. Construction of Tilla-Kari madrasah began in 1646 on the site that was built in XV century and severely dilapidated caravanserai Mirzoi with partial use of its foundations and walls. Construction works lasted 14 years and was completed in 1660. Tillya-Kari madrasah is located in the northern part of the Registan Square and ends facing south architectural ensemble of three madrasahs. It is square in plan construction of a total area of ​​75x75 meters. Changing the proportions of the main facade had another consequence: as the central element of the composition, madrasah Tilla-Kari at the same time does not look the same massive and attracts too much attention, as it is the background for the other two more monumental madrassas.

Currently, the traditional image of Samarkand which became one of the tourist centers, decorated buildings constructed by Zhalantos. There is a plaque with an inscription on the gates: "The building was constructed on the order 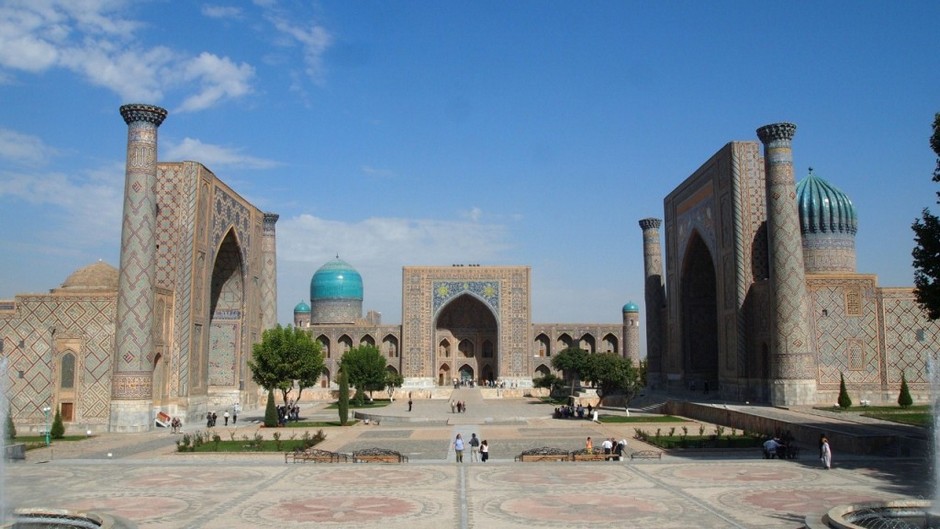 The development of the architectural art of Central Asia was influenced by nomadic peoples inhabited Kazakhstan. This influence is not limited to Zhalantosheritage. In connection with frequent campaigns of Zhalantosagainstthe Dzhungars, construction of madrasah "Tillya Kari" remained unfinished.

Zhalantos batyr died in 1656, at the age of 80. He is buried in 12 km from Samarkand in mausoleum Dagbit kystagy. (Kazakh Soviet Encyclopedia, book

4). Descendants of Zhalantos Bakhadur live to this day. One of them - Oraz Baymurzayev, architect, inherited the path of his ancestor Zhalantos Batyr, the chief architect of Almaty city, the winner of the State Prize of the Kazakh SSR, the author of Academic Drama Theater named after M. Auezov, member of the Supreme Council of the Kazakh SSR.