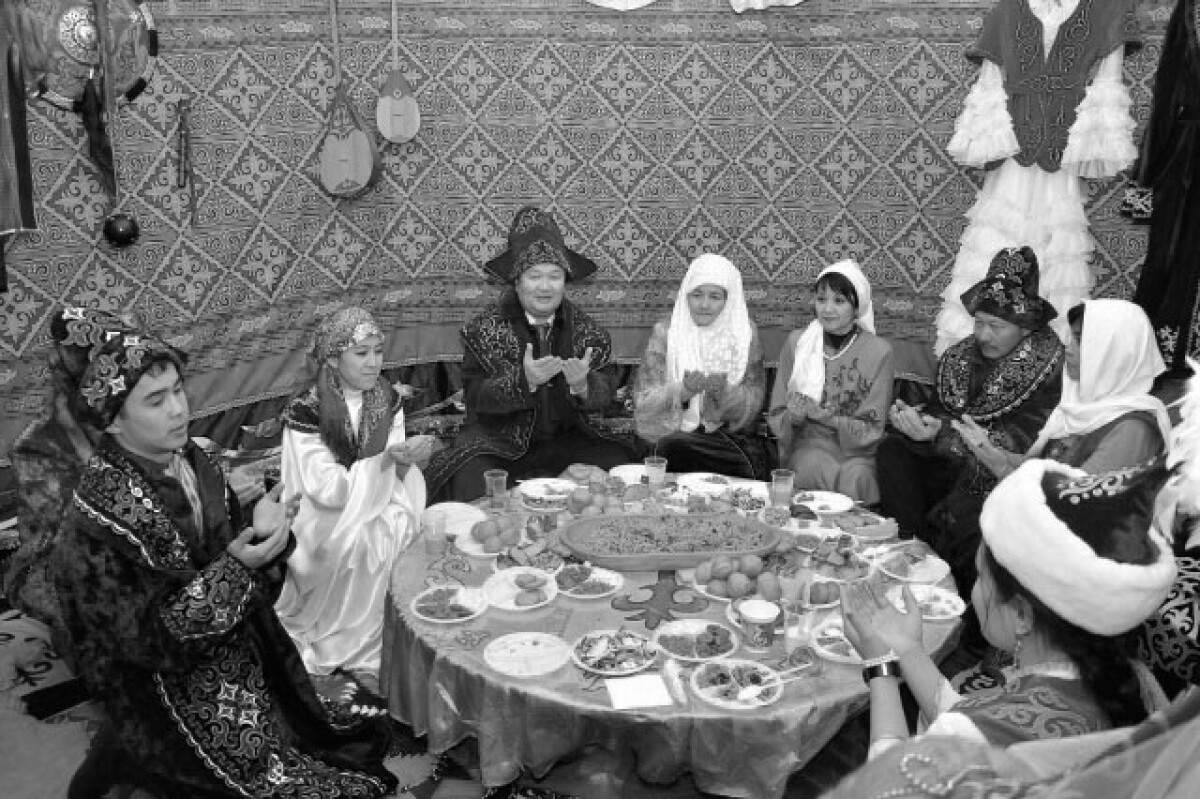 Kazakhs had always differed with the special esteem and treatment of guests. They believed that with guests came wealth and well-being.
There is a legend about the origins of this tradition and it is connected with the name of Alash-khan. Being in his declining years, he divided his property into four equal parts, three of them, cattle, he gave to his sons — Great, Middle and Young zhuz, and the forth part, also dividing it into equal parts, he left to his sons for the guests.
It is said among folks «with a guest comes wealth and prosperity». That is why the host opened the doors of his house himself and invited guests with honor, and when they were leaving, they were suggested to open the doors themselves. It meant that they were not shown the door, not sent packing. There is a proverb apropos of this: «You are to decide when to invite the guests. But only they decide when they are to leave».
It is not acceptable to say unflattering words to the guest, even if he is guilty of something with the host: «Even if your guest is guilty don’t you show it to him. No matter how big his fault is, don’t you show him your offense».
Kazakhs loved to receive guests and at the time they loved to be guests themselves. «As long as you are able — learn the country by treating people; as long as you have a horse, learn the land by riding around it». Such were the edification words to a young man, so that he was not just sitting at home, but learnt the country, land and people.
While visiting somebody’s house, Kazakhs were always observing etiquette of decency.
Following the traditions a traveler never stopped at the first house he came across. In one of the houses at the border of the aul he asked: «Who is at home? Come out here!» If it turned out that the host can receive a guest, only then did he stop at his place or, having checked, he went to the other house.
The travelers had to prove their sincere intentions, they left their armor in the anteroom, and entered the house only with the folded whip; it was reckoned, where the whip is there are no evil spirits. If the host was not at home, then the guest, having had the dinner, did not stop for the night he left for another house.
Kazakhs subdivided the guests into several categories:
- Arnayi konak — specially invited guest was considered as desired, a cattle was killed specially for him.
- Kudayi konak — accidentally wandering in guest.
- Kydyrma knak — the one, who came from far away in search of relatives; they were not hurrying with departure, a sheep was also killed for him.
- Kylgyma konak — a guest, who was on the watch where food was cooked and appeared without the invitation. It was an unwelcome guest.
If a guest arrives unwelcome,
Lie and hold your stomach,
If a guest arrives desired — kill a sheep,
Don’t be stingy with your treat.
Or:
One is coming — he has business
Another — to help his neighbor,
The third one — just to eat for free
Or just to talk a little.
Use of materials for publication, commercial use, or distribution requires written or oral permission from the Board of Editors or the author. Hyperlink to Qazaqstan tarihy portal is necessary. All rights reserved by the Law RK “On author’s rights and related rights”. To request authorization email to or call to 8 (7172) 57 14 08 (in - 1164)
Қазақша Русский English
THE MOST WIDELY READ
Year
Philosophy of the Emblem President of Kazakhstan took part in the opening ceremony of celebrations dedicated to the 175th anniversary of Abai Kunanbayuly Abdurakhman Aitiyev and his struggle Nurmukhan Zhanturin. Actor who played himself Ydyrys Mustambayev. Defender of Abai and Magzhan Online documentaries Kassym-Jomart Tokayev sent a telegram to UN Secretary General António Guterres History of pandemic in Central Asia THE GREAT SON OF THE GREAT STEPPE What was the composition of the country’s Supreme Soviet of the XII Congress Armenians and their kinship with the Kazakh people Nurtas Ondasynov. Kunayev’s Chief
Polls
Materials on the topic
Labels of the Golden Horde khans and Russian clergy
From the story of a blood feud
A role of Buddhism in formation of Central Asian mythologies
The referendum on the Constitution is a significant stage of democratization