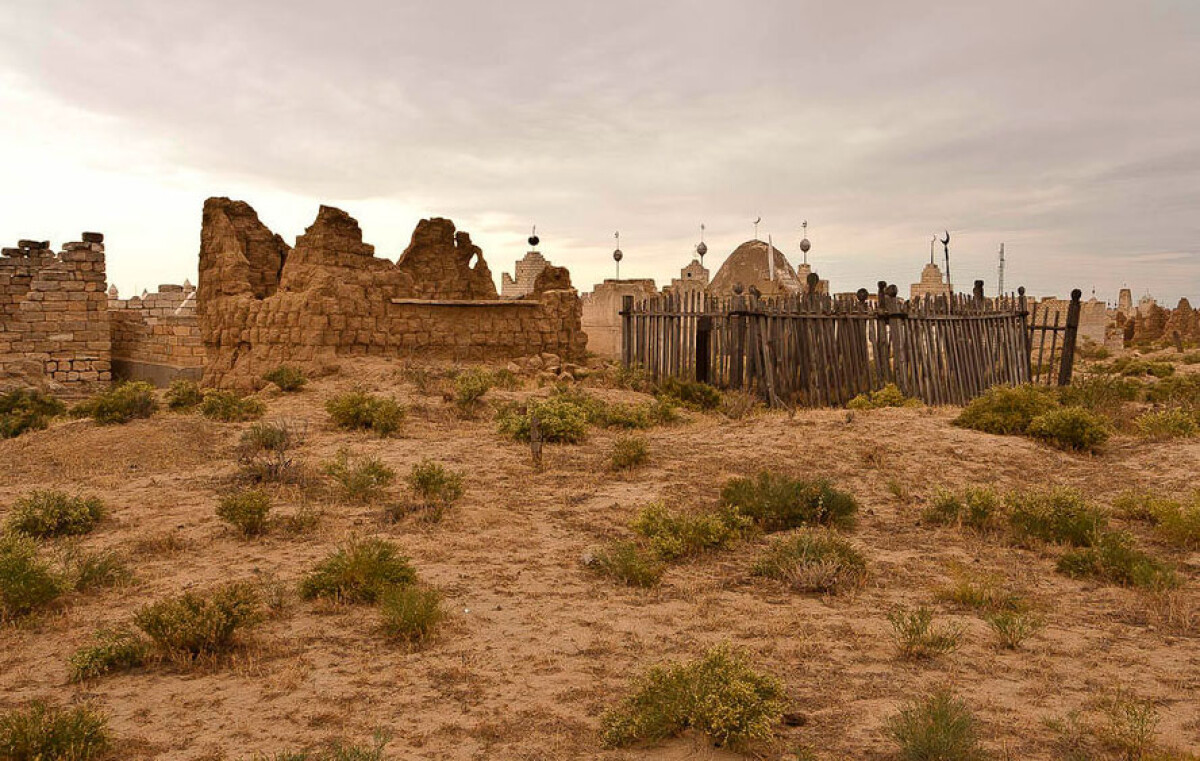 1. Rite connected with the preparation of the passed to funeral (ablution, dressing, prayers, beating-out, zhanaza — service for the dead carrying over to the cemetery);

According to tradition at the bedside of the desperately sick person there gathered relatives, asked forgiveness from each other, and also asked the sick person to tell them about his will (osiet), which must have been fulfilled after his death.

The dead (olgen kisi) was placed in the right part of the yurt, on the distance from the entrance and that part was hid behind a curtain (shymyldyk), which separated the dead form alive people.

The news about death was passed to everyone in the aul, region. Close relatives were informed delicately, i.e. several honorable aksakals told them about the occurrence allegorically, that was called among people «estirtu» which had numerous images created on the base of oratorical skills. Usually the first who came to the funeral were mullahs, old people, who represented the main ancestral groups of Kazakhs. Usually Muslims bury the dead on the same day of his death if he died early in the morning or at night, and they bury him the next day if he died in the evening. However, nowadays people wait longer, but not more than two days as it contradicts shariat norms. This can be explained as follows: the first day the dead is alive’s guest, the second day he’s a prisoner and the third day the funeral starts. Deviation from the Muslim rules of instant burying was connected with the remain of ancestral relations that demanded obligatory presence of the representatives of the dead man’s kin and many other families of the same tribe with whom these relatives were bound with economic, marital and neighbouring ties.

Every adult who came to the funeral expressed his condolences to the relatives of the dead (konil aitu). To write a song for this occasion meant to have high artistic ingenuity. They praised sincere qualities of the deceased, his place in the social life. There were widely spread such traditional forms of konil aitu, which contained consolation of the relatives of the dead, an appeal to endure the grief firmly, ad sincere wish of good luck and health. From the moment of death till the bearing out of the body women mourned over the dead. They let down their hair when a close man died, expressing in such a way their deep sorrow, grief and misery, singing «zhoktau» (farewell song-cry). All gathered neighbors-women, old women and relatives tried to calm the woman down and bring her to success. That custom showed faithfulness of the wife to the passed husband, relatives, and was considered as an oath in his (their) memory. Men could only mourn for men.

And there was no praying for little children.

After the sunset it was not allowed to bewail out loud. At nights if there was a dead person in the house, during seven days after the funeral there should be oil lamps (mai sham) burning all these days. It was not allowed to leave the deceased alone, so at night there were old people in the same room with the dead. They were talking only about pious things — salvation of the dead soul.