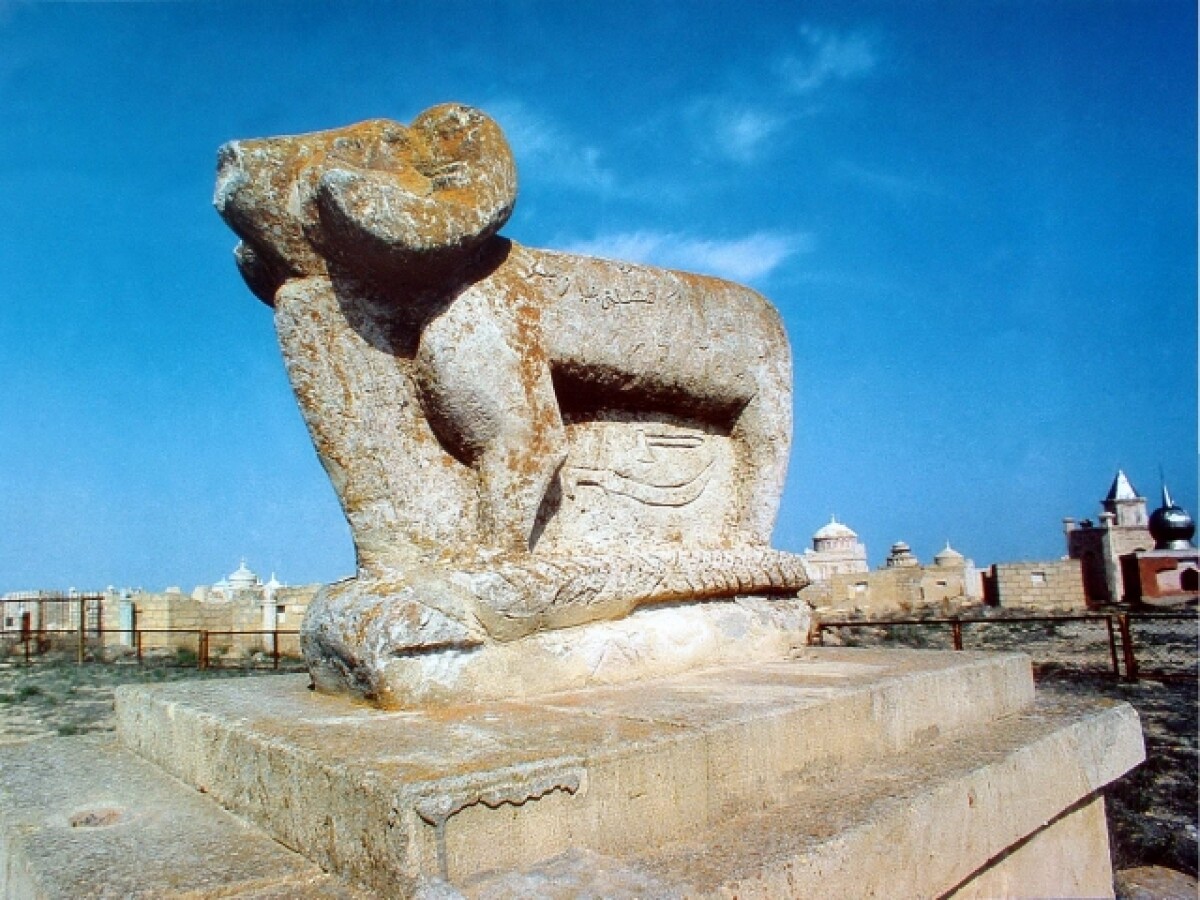 The peninsula of Mangyshlak is famous in Kazakhstan for its numerous «cities of the dead».

Though they never left any traces indicating their lives due to their nomadic lifestyle, the Kazakh nomads managed to leave remaining monuments for their dead. To analyze these monuments is a science in itself. The mausoleums, their fences, gravestones and tomb plates in all possible shapes tell the stories concerning the origins of the dead, about their trade and their favorite occupations.

The grave of a poor Kazakh is usually adorned with only a flat or upright tombstone. Most often the name and the tribal system of the dead man are carved in them, as well as sometimes objects that were characteristic for the man’s occupation such as a saber or a horse whip. These gravestones are known as «small forms». Better-off Kazakhs were buried under three or five tomb plates of a particular shape put together as a pyramid. The images they bear can consist of treasure boxes, saddles or helmets, or styled animals. The graves of well-to-do Kazakhs have often been surrounded by an ornamented wall, a small window, where a small look is allowed.

In days of old, mausoleums used to be reserved for saints only. The status of a saint could be obtained during one’s life through outstanding wisdom and/or successful entrepreneurs and high officials are also rewarded with a mausoleum when they die. These «saints of modern times» are being honored with a pompous dome, often lavishly adorned on the outside. Inside the mausoleum there is always an impressive coffin and often a mat on which people who visit the dead sit down. Any Kazakh’s home is where his ancestors are. He will always tend to return to the place where his forefathers have been buried. Here, he enters to communicate with the deceased. This is why one can often see benches around the fences of richer people’s tombs.

There are hundreds of burial sites in the semi-desert of the Mangyshlak peninsula which one can rightfully dub cities of the dead. There is a fully natural reason for the fact that here in particular there is such a concentration of stone memorials of time. Since Mangyshlak is rich in mussel chalk, which in combination with the Kazakh artisans’ capability to shape and prepare it, survives the ravages of time to a much further extent than the clay tombs in the center and south of Kazakhstan. The view of the bright domes and white walls looming up in the flat, bare land on the horizon like a flat morgana is truly unforgettable. The largest of them is located to the north of Aktau, next to the village of Akshukyr near the airport. This site, named after a saint called Koshkar Ata who is buried here, is situated on the road from Aktau to Fort Shevchenko about three kilometer after the road on the right that leads to the airport. Not only the size of the mausoleums impresses but also the new ones’ riches in shape, including a rare one with its foundation in the form of a triangle. One almost overlooks the ancient, worn-out gravestones scattered between the impressive newly built constructions. Most interesting is also an ancient tomb monument in the form of a ram, right behind the entrance. It is unusual insofar that Islamic law, which bans images of living creatures has been violated here in a most beautiful way. Sheep used to be and still are popular ornaments on tombstones, but usually they are represented in a very stylistic manner with hardly more than the animal’s trunk being recognizable as such. The image is known as khoy-tas, while the statue over here is called khoshkar-tas.

One of the oldest and large necropolis in Kazakhstan is the Kazakh/Turkmen city of the dead Shopan-Ata situated 25 kilometer to the north of the village of Senek. More than two thousand graves dating from nine different centuries are grouped around an ancient mosque which consists of various rooms of prayer, hewed in the sandstone. The Karaman Ata graveyard is also worth a visit, 35 kilometer to the south-west of Shetpe, which also has an underground mosque and Kara-Tyube, on a black hill that bears the same name at 30 kilometer from the village of Tuschikuduk. Apart from numerous beautifully adorned «small forms», this one features a particular hexagonal mausoleum dome.

Large numbers of these grave sites can be found along the roads but also in the middle of the steppe where there are no roads whatsoever.

Used materials:
Dagmar Schreiber «Exploring Kazakhstan»
The article was written as part of 86 and 87 steps of the section «Identity and Unity» in the program «100 concrete steps» on joining the world’s 30 most developed countries.
Use of materials for publication, commercial use, or distribution requires written or oral permission from the Board of Editors or the author. Hyperlink to Qazaqstan tarihy portal is necessary. All rights reserved by the Law RK “On author’s rights and related rights”. To request authorization email to or call to 8 (7172) 57 14 08 (in - 1164)
Қазақша Русский English
THE MOST WIDELY READ
Year
Philosophy of the Emblem President of Kazakhstan took part in the opening ceremony of celebrations dedicated to the 175th anniversary of Abai Kunanbayuly Abdurakhman Aitiyev and his struggle Nurmukhan Zhanturin. Actor who played himself Ydyrys Mustambayev. Defender of Abai and Magzhan Online documentaries Kassym-Jomart Tokayev sent a telegram to UN Secretary General António Guterres History of pandemic in Central Asia THE GREAT SON OF THE GREAT STEPPE What was the composition of the country’s Supreme Soviet of the XII Congress Armenians and their kinship with the Kazakh people Nurtas Ondasynov. Kunayev’s Chief
Polls
Materials on the topic
Labels of the Golden Horde khans and Russian clergy
From the story of a blood feud
A role of Buddhism in formation of Central Asian mythologies
The referendum on the Constitution is a significant stage of democratization