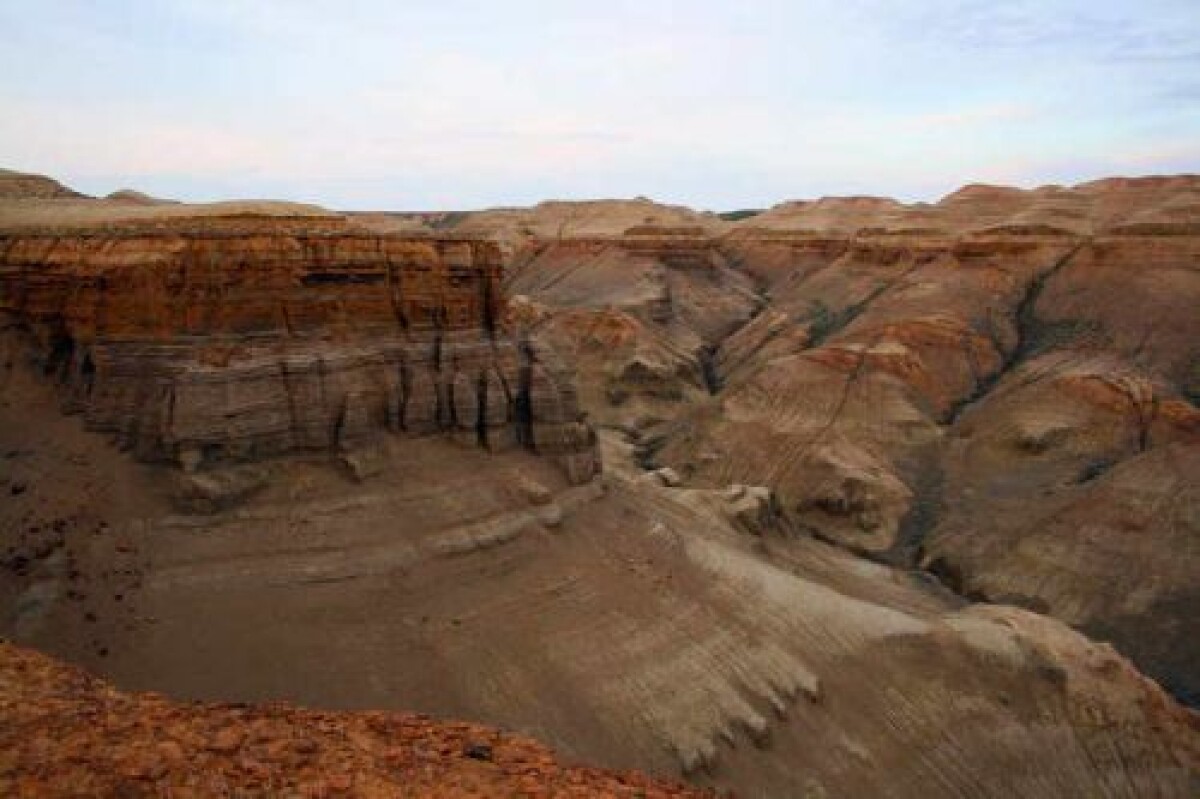 The plateau proper consists of a flat highland plain, without water and covered with sand in some places and with gypsum crystal in others

Ustyurt is a state natural reserve of Kazakhstan. It was established in 1984 on a surface or of than 2200 square kilometer and includes the western edge of the Ustyurt plateau with its bizarre erosion formations. As for the plateau proper, it stretches far into Turkmenistan and Uzbekistan. Its surface of 200 000 square kilometer stretches from s-called Western Chink between the Gulf of Mangyshlak and the Karynzharyk desert to the eastern Chink on the west bank of the Aral Sea. It is far from an exaggeration to call this area the best-protected natural reserve in all of Kazakhstan. Geographic structures and the absence of any infrastructure condemn visitors to travel on foot, by helicopter of hundreds of kilometers by jeep something, fortunately, only few visitors can afford. The chalk cliffs of Ustyurt, named chinks are of an impressive beauty here. The giant uplifts, which in the eastern part bordering the Aral Sea reach heights of up to 219 meter while those to the west are up to 341 meter high, stretch over hundreds of kilometers towards the north and the south. The western uplifts in particular have been formed by splits, faults, ruptures and other erosion effects into a richly varying landscape. Numerous and in part really large rock caves in the central, eastern and southern areas have offered shelter to man and animal alike for thousands of years. The largest among them are the Balayuk caves, more than two kilometer in length with a lake as big as a swimming pool, and those of Otebay, 57 meter long, 30 meter wide and up to 12 meter high, which are a side-branch of them.

The plateau proper consists of a flat highland plain, without water and covered with sand in some places and with gypsum crystal in others. Only here, a kind of aksaul grows not in the form of bushes but proper trees. In the natural reserves relatively large groups of the unique species of Ustyurt moufflons live, as well as a few remaining lynx-like desert cat named Karakal, which is threatened with extinction, Indian quill boars, along with saiga antelopes and some 20 000 dzheryans or half of their population in all of Kazakhstan. Many reptiles and rodents are indigenous here, and at night one can spot long-eared desert hedgehogs. Near the Houbara fault trap one finds predatory birds including the rare Turkmen owl, the Saker falcon and scavenger birds such as the monk vulture. All of them celebrate their feast each seven to nine years when the zhut leaves thousands of hoofed animals dead. This phenomenon, most feared among the nomads, takes place when following winter rains all of a sudden temperatures drop sharply and the desert freezes. The animals cannot find enough food any longer and die.

In order to reach the Ustyurt plateau one has to turn towards the south on the road from Beyneu to Aktau after 180 kilometer towards Sau-Utes along a field road. From there on, one has to drive for many kilometers across in part sandy, in party swampy plains. One actually finds oneself already on the plateau here. The entire immense area has a network of unpaved tracks. Venturing on one’s own here is not recommended since one easily loses the way on the numerous forks and sidetracks. In such a case, one finds oneself hopelessly lost alone in the dessert, where only at distances of 50 to 70 kilometer a spring promises relief. Another way to get to the foot of the plateau on foot is by driving from Aktau over Zhanaozen and Senek to the east. Here, at a distance of 200 kilometer from Aktau, the asphalt road ends. One can continue for another 50-or-so kilometer until one sees the cleft chalk wall of the western chink rise up before one’s eyes. Here, there are few spots where it is possible to climb up to the plateau.