About the expedition “On the ways of the Kazakh khans” 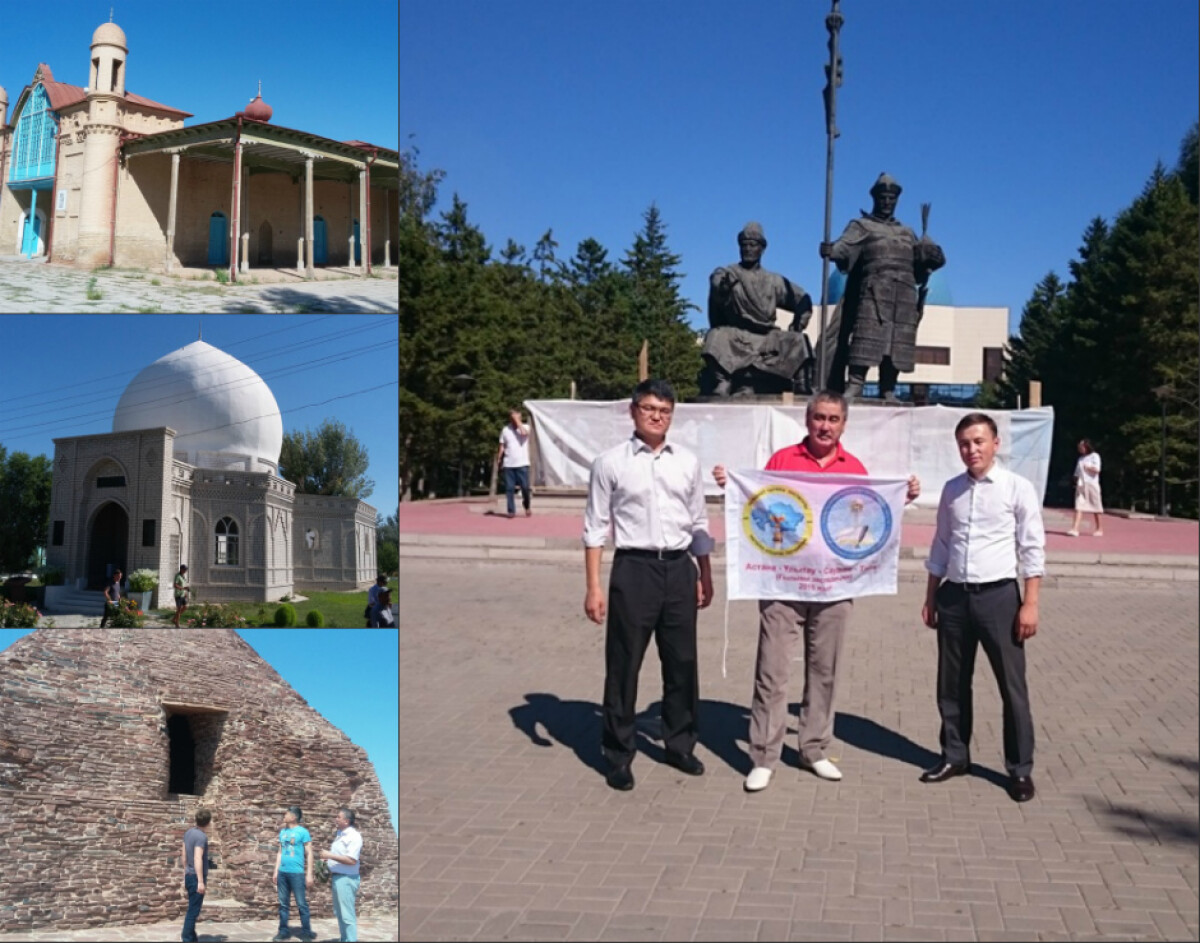 I hope that the expedition would become only the beginning of the new tradition of our Institute, especially since there are a lot of interesting places in Kazakhstan for the people who love history.
For 8 days during the expedition dedicated to the 550th anniversary of the Kazakh khanate, we with the colleagues from the Institute of State History were riding for almost four and a half thousand kilometres. The members of the expedition were the employees of our Institute: director, professor B. G. Ayagan, Deputy Director R. D. Temirgaliyev, junior scientific worker A. Abilov and driver D. Zhakupov.
After leaving Astana on 3 August 2015, we headed off through Karaganda to Ulytau. Ulytau region has the special significance in history, from the earliest times being one of the meaningful economical, political and cultural centres on the territory of Kazakhstan. The rich deposits of natural resources, conditions for the development of cattle breeding and agriculture, convenient location in the very centre of the Kazakh steppe which revealed the administrative management, trade and other interaction among different groups of people contributed to that. The remnants of numerous ancient settlements, wells, dams, irrigation systems, mines, sanctuaries, burial chambers dated by various periods of history, information given in the written sources, folklore, convincingly confirm the special role of Ulytau in the history of Kazakhstan. 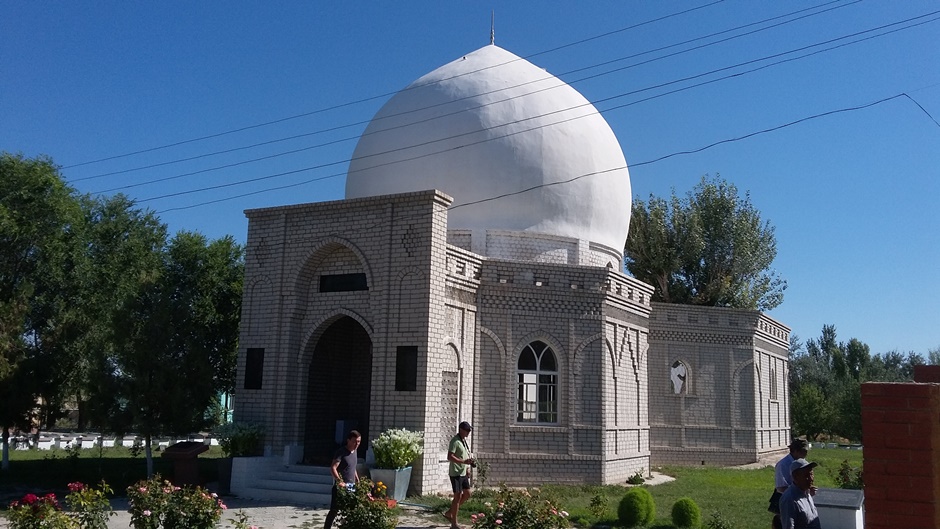 On 4 August, since the morning we started the observation of local sights from Alash-khan mausoleum. As the folk legends have it that he was the first ruler of the Kazakhs who united them into the single nation. Historians put forward different versions of who from the real historical activists was the prototype of that legendary hero. For me personally, the most well-grounded seems the version identifying Alash-khan and Urus-khan. Anyway, the visit of Alash-khan mausoleum since the ancient times was considered the special ritual by Kazakhs, and as the local people said to us it is regraded right to start the inspection of local monuments just from it. The grandiose mausoleum has a very strong impression. By the special ladder it is possible to rise to the roof and see the suburbs. 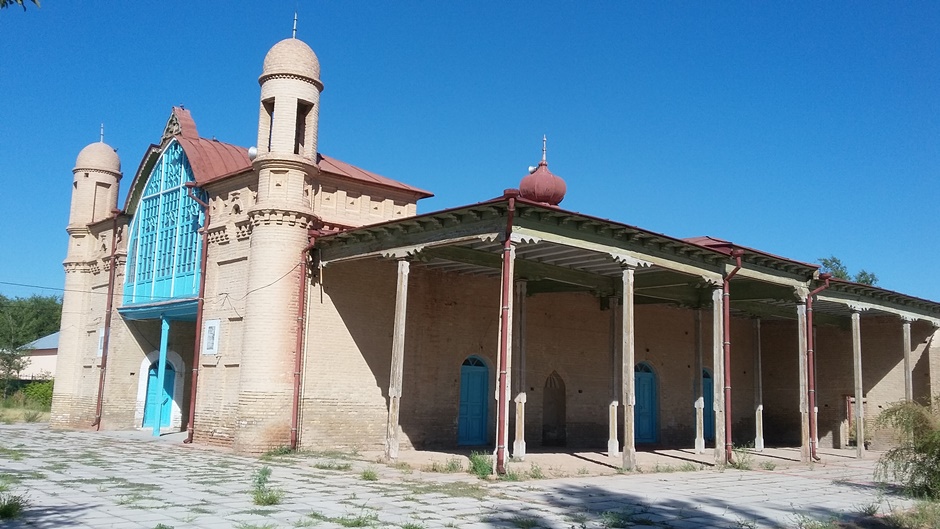 The second monument of history which we visited became the mausoleum of Dzhuchi-khan. About the fact that the elder son of Genghis Dzhuchi-khan passed away exactly in Ulytau not only the oral legends say but also the written sources.
The third point stood out to be Dombaul mausoleum. Scientists-specialists consider that this monument relates to the Ozug-Kypchak epoch. Perhaps, it was raised over the place of the burial of any famous in his time representative of the elite — khan or batyr. In the Kazakh legends Dombaul acts as the famous hunter-mergen and ... step-father of Genkhis khan.
In Ulytau we also saw with our own eyes the mountain Altyn Shoky, where by the order of the emir Timur in 1391 on the stone the memorable inscription was made, and Edyge mountain at the top of which according to folk legends the well-known character of the steppe history was buried. Unfortunately, we do not have time to get to the top, but I will hope that I will have a chance to do it. 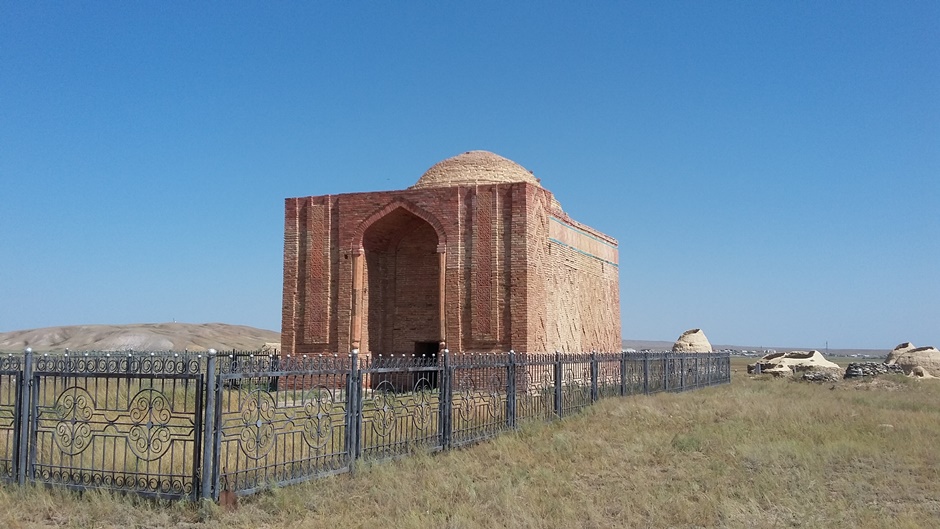 Early on 5 August morning we headed off to the south. Usually, people who wish to reach the southern regions from Zhezkazgan go along Zhezkazgan-Kyzylorda highway, but we decided to go by the route “Zhezkazgan-Mibulak-Kyzemshek”, on the very centre of Betpak-dala. The steppe road had many surprises and once by not noting the bypass we bogged down in the sand. Fortunately, near us was the farmer’s house, and he helped. By the evening we went to the excellent highway not indicated on the map, but laid by the Kazatomprom for own necessities and had a night in ancient Sozak.
On 6 August morning, after observing local sights, we went to the way on the picturesque road through the Karatau mountains. These mountains were imprinted in the folk song full of grief “Elim-ay”, which appeared during the years of the Dzhungar invasion. It is possible to imagine how difficult it was for our ancestors to go through the mountains on horses and camels, but as for us we practically did not notice how we reached Turkestan. 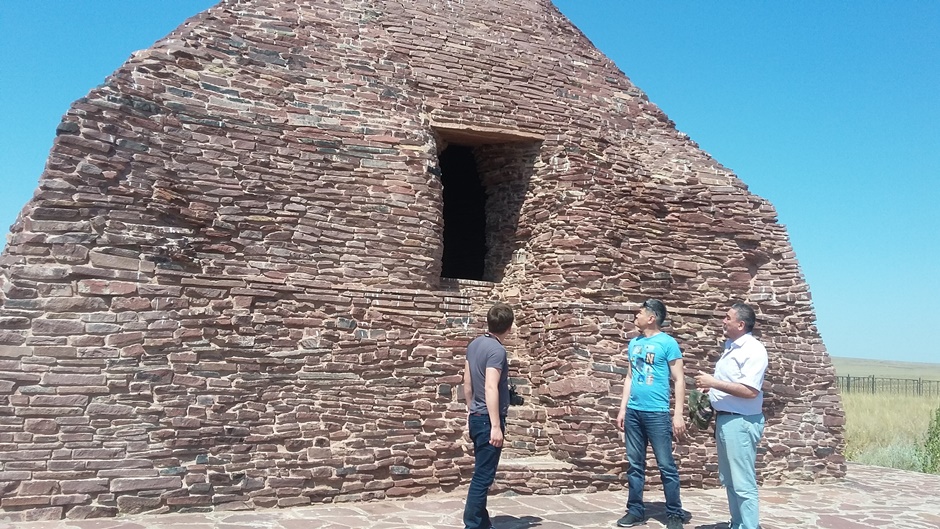 Turkestan was the capital of the Kazakh khanate, since the beginning of XVII century after taking the palm of victory from other cities. Mostly that fact was conduced by the construction of the mausoleum over the grave of the Sufi prophet Khoja Ahmad Yasawi by emir Timur. He was one of the most esteemed Muslim enthusiasts in the whole Central-Asian region and devoted to him the architecture monument contributed to the sharp increase of the number of pilgrims, and, correspondently, the meaning of the city itself. In the second half of XVI century among the Kazakh elite the custom of burial of the noble people at the mausoleum appeared. As it is known, it is one of the ancient cities of Kazakhstan which was preserved till today.
From Turkestan we went to Sygnak. It was one of the main cities of the Kazakh khanate in XV-XVI centuries. Kazakh khans considered it their legal heritage and ownership of it was the issue of political prestige. Sygnak was one of the largest trade cities. According to legends, in numerous city markets the meat of 500 camels was fried and sold. Coming from it, one can imagine what big turnover trade had. At the present time in Sygnak the restoration works are conducted and we had the possibility to observe the work of specialists restoring Sunak-Ata mausoleum.
The final destination of our expedition in South Kazakhstan became Sauran. The remnants of the huge bastions and walls of that castle have a great influence, and it is easy to represent what meaning it had in the medieval epoch. Sauran was considered a separate and prestigious property, whose ruler was one of the authoritative and influential Kazakh sultans.
After staying in Shymkent for a night we went to Taraz, to the territory of the ancient Mogulistan, where we found the dwelling of Kerey and Zhanibek for ourselves. 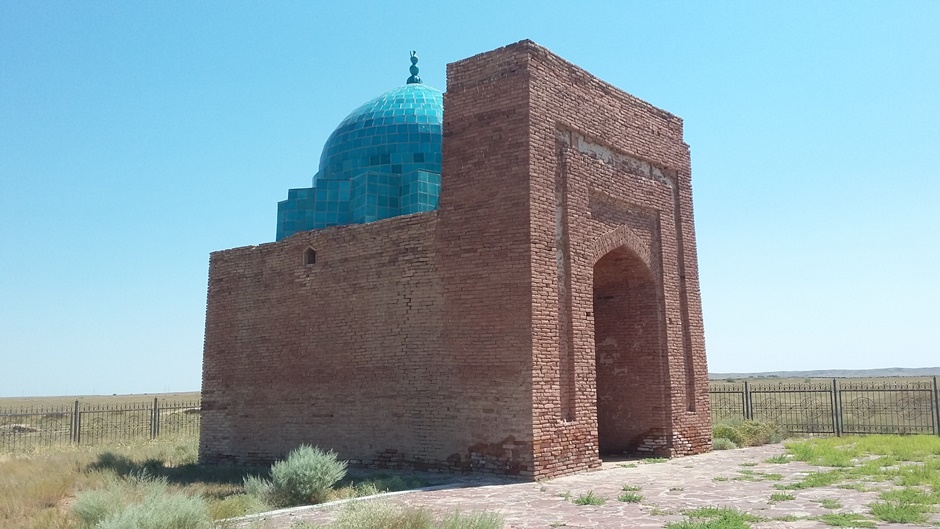 On 7 August morning we set off to Hantau, where as it is supposed the quarters of Kerey and Zhanibek were located, when they were announced the khans, that is why these mountains got such a solemn name. In these lands in 1730, in many historians’ opinion, the famous Anyrakay battle took place, during which the united troop of all the three Kazakh zhuzes under the head of Abulkhair-khan inflicted the decisive defeat to the Dzhungar troops.
By the evening of that same day we were already on the shore of Balkhash or Kok-teniz as Kazakhs called it earlier, where we took a short respite from travel. On 8 August evening we went to Aktogay, where after having a sleep we started to get acquainted with local historical sights. There are many historical monuments beginning with the times of neolith, ancient Turkic sculptures-balbals and finishing with the graves of the Kazakh and Oirat batyrs. However, more than that to the connoisseurs of the national history this place is known, probably, as the motherland of three outstanding Kazakh activists of the Alash party — Alikhan Bukeykhanov, Zhakyp Akbayev, Alimkhan Yermekov.
The figure of Alikhan Bukeykhanov interested us more. Next year in Kazakhstan the 150th anniversary of that great personality without any exaggeration will be celebrated and we considered it not right to pass on our way his native land. All the while, as a Chingisid he embodied the last tradition of the Kazakh khanate. We saw a big mazar, t built by Alikhan Bukeykhanov himself for his relatives, set by him tomb monumnets and even a planted tree.
In the evening on 10 August we returned to Astana. It was such expedition of ours, which, undoubtedly, gave us the huge capacity of the information for reasoning. It would be extra to talk about the deficiency of the cabinet work for the real contact with historical heritage. Some things should be felt, one can not derive it from the sources. I hope that the expedition would become only the beginning of the new tradition of our Institute, especially since there are a lot of interesting places in Kazakhstan for the people who love the history.
In conclusion, I would like to note that the expedition would be more difficult if during that we were not given the assistance. I would like to express gratitude to the akim of Ulytau district Khamit Omarov, akim of the settlement Mibulak Zhangeldy Konurbayev, farmer of Mibulak Kadyrpatshayaev, Sozak policemen Nuradil and Gaziz, director of the Institute of Archeology named after A. H. Margulan Baurzhan Baytanayev and his colleagues: Taraz sceinetist Askar Abdualy, employee of our Institute Marzhan Bekenova, Aktogay local historian Tungushbay Mukan and many other people, whose names I could not unfortunately remember and did not guess to write down.
Radik Temirgaliyev, Deputy Director of the Institute of State History
Use of materials for publication, commercial use, or distribution requires written or oral permission from the Board of Editors or the author. Hyperlink to Qazaqstan tarihy portal is necessary. All rights reserved by the Law RK “On author’s rights and related rights”. To request authorization email to or call to 8 (7172) 57 14 08 (in - 1164)
Қазақша Русский English
THE MOST WIDELY READ
Year
Philosophy of the Emblem President of Kazakhstan took part in the opening ceremony of celebrations dedicated to the 175th anniversary of Abai Kunanbayuly Abdurakhman Aitiyev and his struggle Nurmukhan Zhanturin. Actor who played himself Ydyrys Mustambayev. Defender of Abai and Magzhan Online documentaries Kassym-Jomart Tokayev sent a telegram to UN Secretary General António Guterres History of pandemic in Central Asia THE GREAT SON OF THE GREAT STEPPE What was the composition of the country’s Supreme Soviet of the XII Congress Armenians and their kinship with the Kazakh people Nurtas Ondasynov. Kunayev’s Chief
Polls
Materials on the topic
Labels of the Golden Horde khans and Russian clergy
From the story of a blood feud
A role of Buddhism in formation of Central Asian mythologies
The referendum on the Constitution is a significant stage of democratization